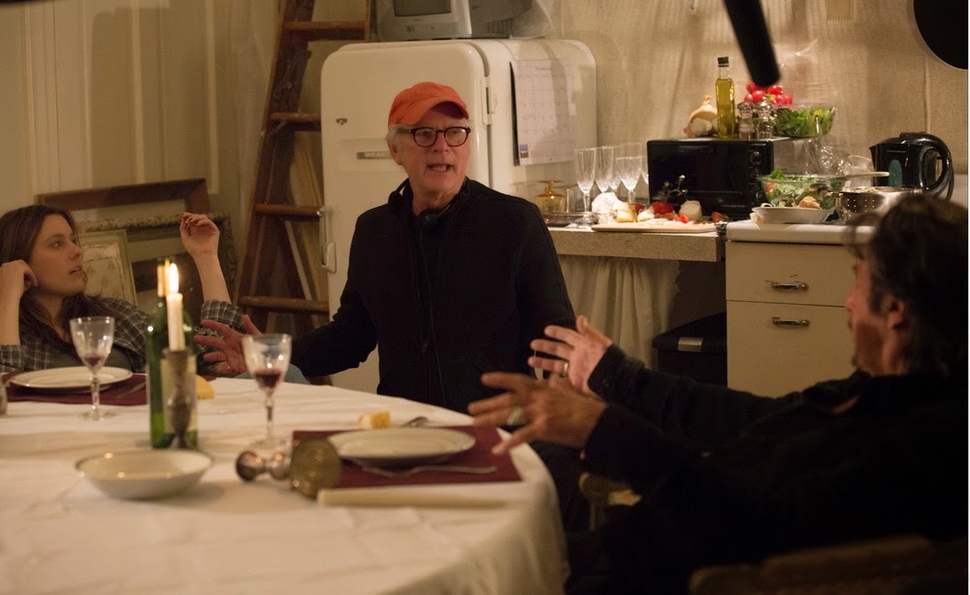 Barry Levinson on making little movies in a big age

Barry Levinson has picked up a lot of experience over the course of a career spanning close to 40 years, and including classic titles like The Natural, Rain Man (which won him the Best Director Oscar), Bugsy, and Wag The Dog. But with his latest film, the Philip Roth book adaptation The Humbling, the 72-year-old entered unfamiliar territory in getting the film off the ground after losing millions from the budget. He wound up using his own house as a main shooting location, and taking production breaks—one lasting close to a month—to appease his actors’ busy schedules. But getting the film out to audiences, he feels, has been an even greater strain.

The Humbling (now in theaters and on VOD) is an entertaining, darkly comedic look into what artists go through when the talents that made them great begin to crumble. Levinson uses a handheld camera for intimacy as his narrative jumps between dream and reality. Al Pacino gives a strong performance that stands out by contrast with his recent work: He plays Simon Axler, a washed-up actor who nose-dives off the stage during a performance of Shakespeare’s As You Like It, then attempts suicide with a shotgun. (“Hemingway must have had longer arms,” he tells his shrink.) Afterward, he endures a bizarre third act of his life, filled with hallucinations and a relationship with young lesbian Pegeen (Greta Gerwig). The Dissolve chatted with Levinson about the challenges of making the film, whether Simon is based on Pacino, and the realities of today’s indie-film market.

The Dissolve: Were you familiar with the Philip Roth novel?

Barry Levinson: No. Al read it and thought it was interesting in terms of a character, and that’s where it began. He said, “Why don’t you read it, and let’s talk?”

The Dissolve: What grabbed you when you read it?

Levinson: I thought it was a really potentially great character. The idea of an older actor in crisis, struggling at this point in his life, it seemed rich to me. And so we began to go down that road.

The Dissolve: When you saw Birdman, did you think, “Oh, shit”?

Levinson: Well, it’s funny, people would say, “Well, there’s another movie about an actor this year.“ And you go, “Yeah, okay. How many movies have a superhero this year? A lot.” And guess what? In real life, there are actually more actors than there are superheroes. There are many, many ways to do this kind of movie. Story-wise, this [and Birdman] are different, and how they are ultimately told is very different.

The Dissolve: The Roth novel is very straightforward. What led to you telling it in this fantastical way?

Levinson: It seemed compatible from the very beginning. It came to me in my very first discussions with Al. I said, “The idea is that Simon is lost.” When we first see him, we know he’s in crisis. Talking to himself in a mirror, can’t find his way, wandering to the stage. Throws himself off the stage. Somehow that was in the very beginning, before we even did anything. 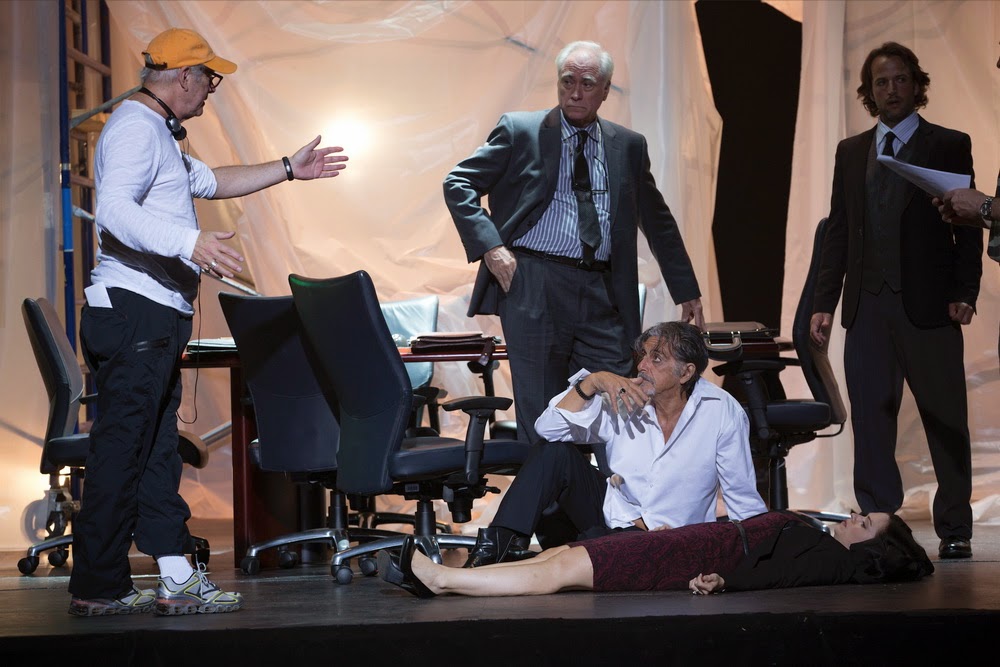 The Dissolve: Did the intimacy of shooting handheld come to you early on as well?

Levinson: Yeah. I thought if it were too manufactured, and too manicured or polished, it would distract from the film. I thought it needed a little roughness. And not necessarily a rigid handheld, but there’s something about it that tells you this doesn’t have a polished sheen.

The Dissolve: There were reports that the production budget was cut by $1 million. How did that affect the film?

Levinson: It was actually more than that. It came down to this: We could have made the movie for more, but we had to put in certain people, certain actors, to appease all these foreign entities. And we thought, “Geez, it’s so hard to have to put this in for Germany, and so forth and so forth.” It just became so confusing. What can we do to make it at a price where we just make the movie with the people we want? And that’s basically how we did it.

The Dissolve: If you’d obeyed all the mandates, how much more would you have gotten?

Levinson: I think it was somewhere in the area of $6 million. But we just couldn’t figure out how to do all these pre-requirements. So we thought, “How do we just make this movie?”

The Dissolve: So you shot at your house, in segments.

Levinson: Yeah, Al had other things he had to do, so we would shoot, shut down, come back, shut down. Kept doing it that way.

The Dissolve: Had you ever done a movie this way?

Levinson: No. I never have. Sometimes there may be a movie where we’d come back for pickups, but never a movie where you literally stop on a regular basis.

The Dissolve: Does that break your rhythm at all?

Levinson: Not in this case. I would just edit. I would see how we were; see if it required any additional things, which it would. And we went that way.

The Dissolve: What was the longest break between shooting?

Levinson: It might have been up to a month, almost. Close to that. It was somewhere in that area.

The Dissolve: In that amount of time, you don’t get in your head too much and start reworking the script, or tweaking the edit too often?

Levinson: Well, there was a little bit, but it did give me a certain bit of clarity. It added to the clarity. I don’t think there was any real downside to the fact that we weren’t shooting all the time.

The Dissolve: One of the fun things about the movie is the dark comedic tone, especially coming from Pacino, who doesn’t do it often. What led to that?

Levinson: It seemed to me inherent in the piece. If you want to talk about an older actor in decline, just to do it as some straight drama didn’t seem that intriguing to me. And so that led to the actor you do see. And I think the Russians do it extremely well, where they have tragedy-comedy. They’re really great at it. And that’s inherent in this piece. So as troubling and fucked-up as Simon’s life is, there is this humor—not jokes, there are no jokes in the movie—but how he behaves, how he functions, and how he responds are all part of the puzzle. 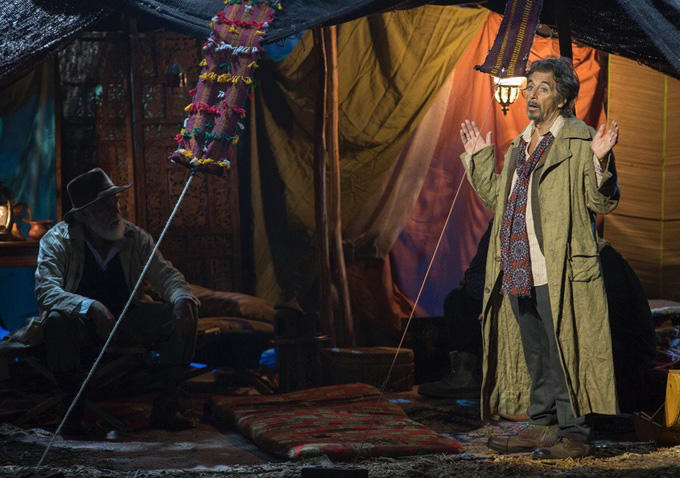 The Dissolve: Pacino has said that Simon is not him. What do you think? Did more of Al seep into Simon as the story developed?

Levinson: No, more and more of Al’s knowledge seeped into it. Not necessarily him.

The Dissolve: But as an actor, isn’t knowledge the experiences you go through?

Levinson: No, not necessarily. He knows of this, he knows of that. He heard this story. He’s seen this, he’s met this person. He’s seen the results of someone who literally can’t go on. He’s been around it. It doesn’t have to be him. That’s what actors are about. He didn’t have to be a bank robber to play Dog Day Afternoon. He saw the guy, he knows what it is, he created it based on all this input. The same applies here.

The Dissolve: Could you see yourself doing a movie this way again?

Levinson: I could see myself doing it. It was intriguing. The downside to all of this is the distribution aspect. That’s the hard part. We’re so cheap, there’s no incentive for the distributor to sell it. Is it going to make money? If it’s only a few million dollars, you’re not going to make any money. So the big thing for them is how not to spend money. What happens is, everything is close to the vest. You don’t get out there the way you want. As I said to [the film’s distributor, Millennium Entertainment], it’s not like the audience goes in and sees this movie, and they leave, and you don’t know if they like it. You could tell the audience liked it from when it played in Venice and Toronto, all these places. It really plays. Is it left of center? Yeah. But it’s not super-obscure. The problem is, it’s too cheap, therefore you don’t really sell it.

The Dissolve: The other side of the coin is, any money they do make off it will come from the VOD/streaming sales. Does it bother you that that’s the main way this film will be seen?

Levinson: That’s fine. It’s just, will people even really know that it’s on video on demand? You have to make some noise for people to know. If you don’t, you’re just up there in some category of 75 other films that you can thumb through. And if you’ve never heard of it, why are you picking it out?

The Dissolve: Is it harder now to hustle a film and get it out there than back when you were starting out with films like Diner?

Levinson: Well, it was a different time. It’s apples and oranges. You can’t really compare them. The point is the movies that are being marketed, whether they are good or bad, it depended on the budget. If there’s a $60 million movie that’s not very good, and they know it’s not good, they will still be out there selling it, because they’re looking to get their $60 million back. When you get down to this range, the incentive to try to sell it, it’s like, “Why bother?”

The Dissolve: So when it comes down to you, there has to be a real passion to go through these hurdles.

Levinson: Yeah. Because you know you’re not going to come out the other side. You’ve going to get lost and disappear. But you do it sometimes because you say, “I really like this.” And somewhere down the line, it’s going to be there as a piece of work I did. But some of the money people today don’t really care about the product. It could be shoes, it doesn’t matter. So you have to go into it understanding that. They may not care at all. You are literally just some product. And you have to be a realist and say, “Look, that’s the grown-up world. You wanted to do the movie, that was the passion, don’t expect anything else.”