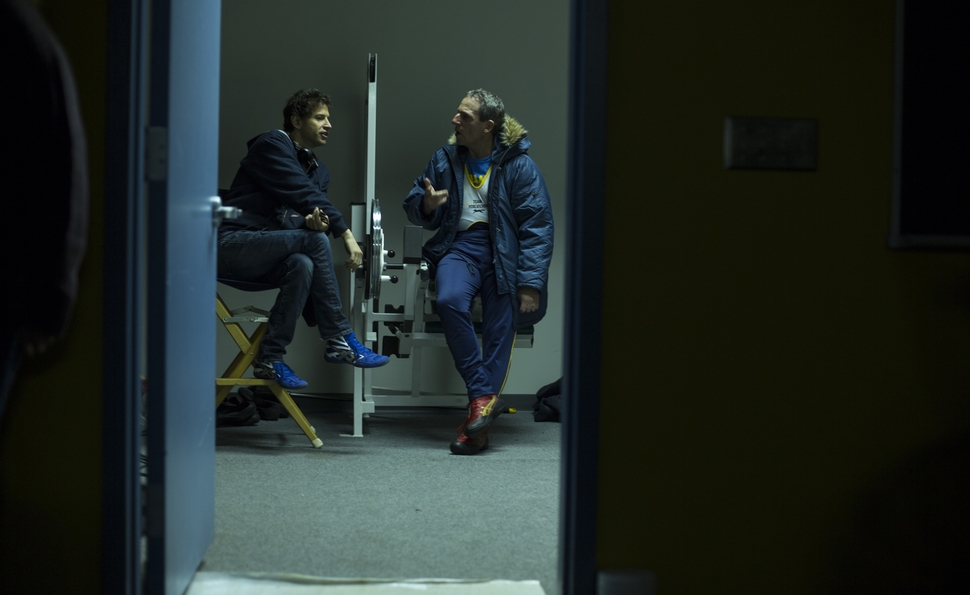 Bennett Miller made his feature debut with the 1998 documentary The Cruise, which followed New York tour guide Timothy “Speed” Levitch on the job. Miller hasn’t left real life alone since. His 2005 film Capote focused on the events around the composition of Truman Capote’s In Cold Blood, and let him work with two old friends: actor-turned-screenwriter Dan Futterman and star Philip Seymour Hoffman. Miller followed it with a film he never planned to make: He inherited Moneyball, an adaptation of Michael Lewis’ book about sabermetrics-favoring Oakland A’s general manager Billy Beane, from Steven Soderbergh, after Soderbergh departed the project. Like Capote, Moneyball earned a Best Picture nomination.

Miller’s Foxcatcher, on the other hand, has been a long-in-the-making passion project, the result of years of research and writing, first with Something Wild screenwriter E. Max Frye, then with Futterman, after a writer’s-strike interruption that made it impossible for Frye to return to the project. Dave Eggers and Kristin Gore also contributed, late and early in production, respectively.

Foxcatcher is a story of obsession told with restraint and understatement. Steve Carell stars as John Eleuthère du Pont, an heir to the Du Pont chemical fortune who turned his attention, and money, to wrestling, recruiting gold-medal-winning Olympic wrestler Mark Schultz (Channing Tatum), and then his brother Dave (Mark Ruffalo) to the cause, and setting them up on an estate equipped with a state-of-the-art training facility. But the brothers soon find that du Pont’s instability matches his largesse, and his patronage comes with some unexpected costs, including isolation and an expectation that they will obey him without question.

While visiting Chicago, Miller spoke to The Dissolve about what didn’t make it into the film, the cult-like atmosphere of the du Pont estate, and the responsibilities those who make fact-based films owe to the truth, even when they veer away from the facts.

The Dissolve: When did this story first come to your attention?

Bennett Miller: In spring 2006, a total stranger handed me an envelope at an event at Tower Video that contained newspaper clippings about the story. That was my first exposure.

The Dissolve: Do you know why this person did that?

Miller: Because he had had a relationship with Mark Schultz, or he knew somebody who knew Mark Schultz, and he thought it was a good idea for a movie, and he thought I would be a good person to make that movie. He was trying to attract me to this story, and had this very unconventional, Rupert Pupkin-y approach to getting a film made.

The Dissolve: Did you follow the story when it first unfolded?

Miller: No, I somehow missed it.

The Dissolve: This film isn’t lurid or sensational. There are details to the story that any other filmmaker would love to include, like the police standoff that lasted two days. How did you and the screenwriters decide what to focus on, and what to exclude?

Miller: The story is sensational, but the treatment of it is not sensational. It’s not a film that tells a story, or sells a story. It’s a film that observes a story. I was attracted to the characters and themes I saw within it. When you have some discipline about remaining faithful to what it is about the story that means something to you, that adds up to something larger than the entertainment of it, or the story itself, something that is larger than these characters… When you’re disciplined about remaining faithful to that core interest, some of these sensational elements just begin to wane in interest. When I first encountered the story, before I knew much about it, it very quickly formed in my mind a feeling, the kind of feeling you have when a film ends, when you walk out of the theater. The process of writing and developing it, and materializing it, is in service of something that formed very quickly, and then took many years to incarnate.

The Dissolve: The focus being on the relationship between the three men?

Miller: The focus on the three men, the dynamics between them. Really, when you go online and research the story, so much of what ended up making it into the film isn’t really covered anywhere. There’s hardly a mention of Mark Schultz if you research this story. But as I got into it, that relationship seemed fundamental to the thing.

The Dissolve: Carell and Tatum aren’t just playing against type: You took away what they’re known for doing best. Carell is naturally likable, and Tatum is naturally confident. Was that a conscious decision?

Miller: I never thought about it like that. They both just seem like great choices. I didn’t think about defanging them of their gifts. Really, the opposite. I saw both of them as talented actors who were ripe for a different kind of opportunity. I think their strengths played pretty strongly into these performances. They’re not expected, because you haven’t seen them do this kind of thing before. But I don’t think this is, for either one of these guys, far-fetched that they could do this. We come to have expectations about people based on what they become known for. Everyone gets put in a box. 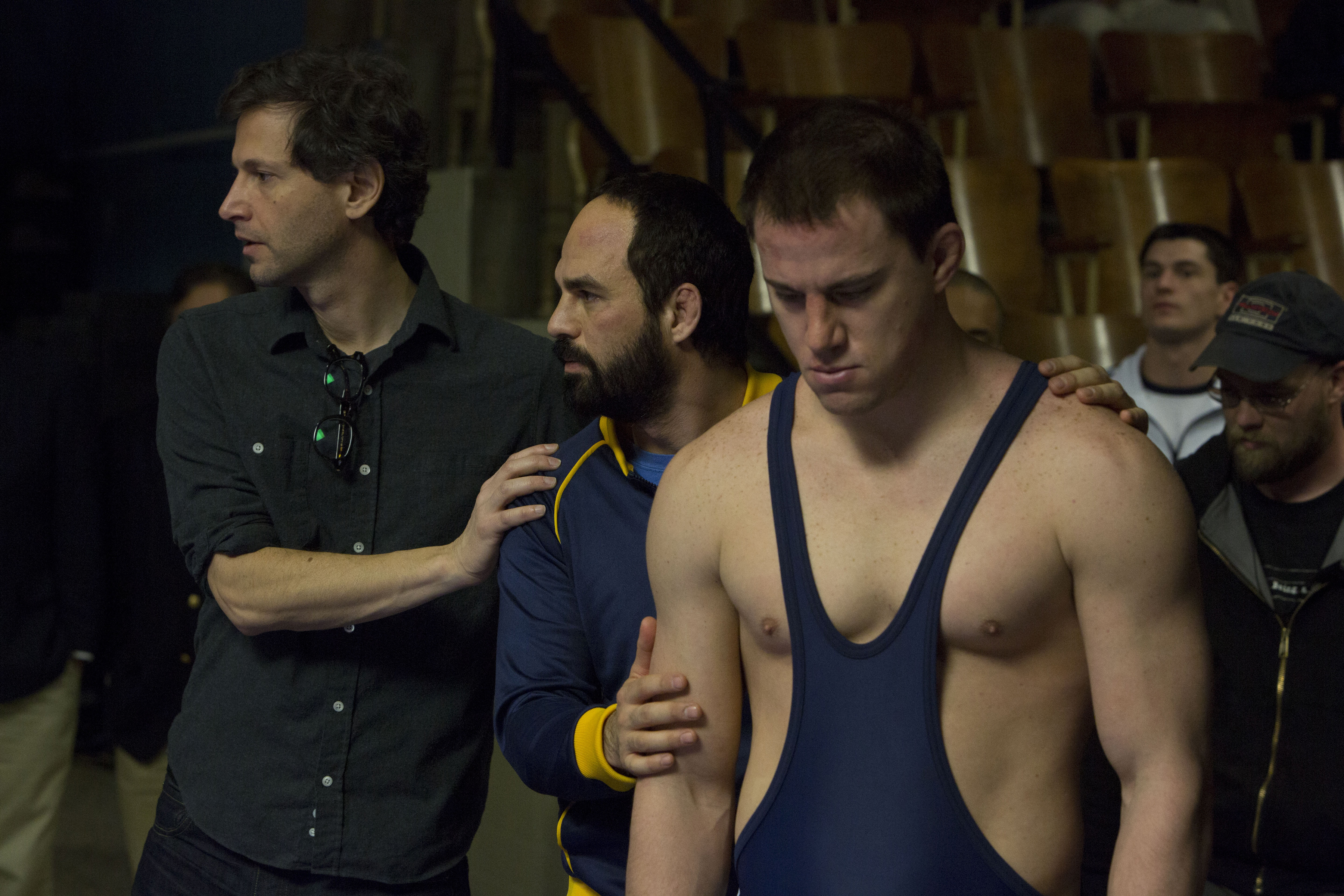 The Dissolve: In the film, John du Pont talks a lot about America, the way it should and shouldn’t be, without ever really expressing what that is. Was the real du Pont as vague about that as he is in the film?

Miller: Most of his money, if not all of his money, went to one party and not the other. [Laughs.] His patriotism was also kind of general. There’s a video of him, for example, at Valley Forge talking to wrestlers and giving his spiel, that’s also of a more general nature. He also wrote books that expressed a kind of patriotism and nationalism based in virtue that I think the film was pretty faithful to.

The Dissolve: It seems like you had a lot of video material to draw on. Was that all from one source?

Miller:  A lot of it came from David “Doc” Bennett, the man du Pont hired to shoot and edit these documentaries about him. He gave us not only those documentaries, but all the raw footage, and became a consultant on the film, and ended up playing himself. That scene where Mark Ruffalo is being questioned and prodded to describe du Pont as a mentor, the guy asking the questions is the guy in real life who actually asked those questions. That’s the guy who gave us all this footage. But there is footage of du Pont going back to the 1950s, including a Time-Life film called “That Thing At Foxcatcher,” which was absolutely amazing. Somebody picked up on du Pont back then when he was training for the Olympics as a pentathlete. He also appeared on the game show To Tell The Truth, and the family had home movies. It was amazingly well-documented. A lot of the wrestlers shot stuff, too.

The Dissolve:  Foxcatcher starts at a very clear point, 1987, and then it gets lost in time once Mark arrives at Foxcatcher. Was that something you were going for?

Miller: The first act of the film is when we’re in Wisconsin. Everything about it, including the way it’s shot, is very grounded. It’s earthy and mundane reality. Everything alters when you get to Foxcatcher. It wasn’t originally by design. Part of it was simply for dramatic expediency. Time gets a little bit collapsed, and we don’t get specific about it. But one thing we did talk about is the experience of being within a cult, which has its fundamental ingredients, which include a disaffected community, a charismatic leader with an idealistic vision, and very importantly, separation from the rest of society—you’ve got your own rules, your own culture inside the parameters of your cult. This was some kind of a little old-money wrestling cult. Within that world, there was its own reality, and it’s a reality you can get disoriented in. There is just a relative truth within there. People from the outside looking in saw something very different from the people inside looking out. People who came to visit were much more alarmed and concerned. People on the inside never thought du Pont was capable of murdering somebody. As I worked on the film and developed it in the editing room, I liked that amorphousness and disorientation. It’s a little destabilizing. 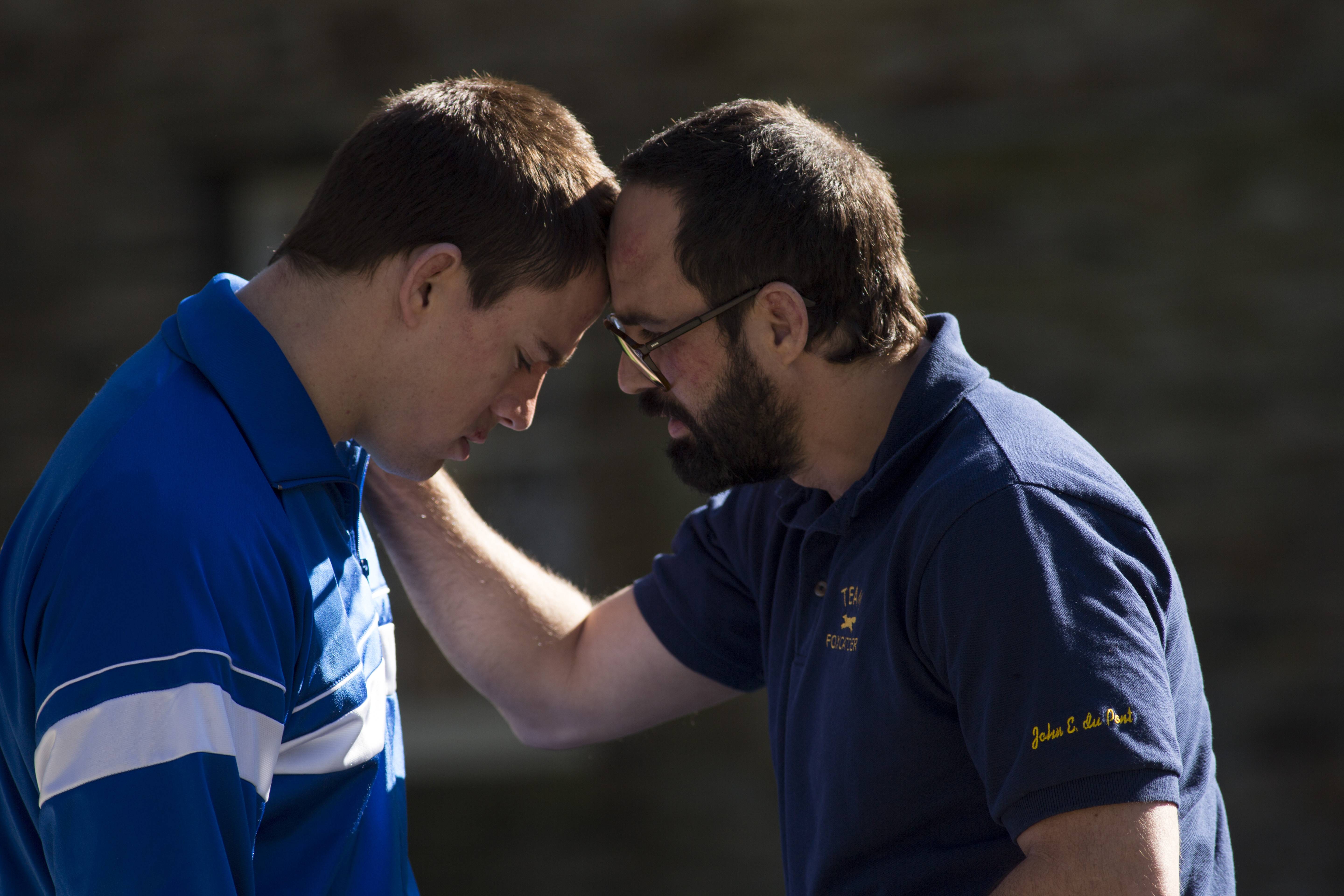 The Dissolve: There are very few glimpses of the outside world, too.

Miller: Between the time that Mark Schultz lands at Foxcatcher and on to the Olympics, you only ever see du Pont outside Foxcatcher twice. One is at the World Championships, and we’re back into a different world, and all of a sudden he is a fish out of water. He’s just swimming in a foreign environment. The other is in a wrestling tournament in an elementary-school gym where you feel the outsiderness of it all. Here we are in this world within the boundaries of Foxcatcher, and all of a sudden, on the outside, it’s very white and light and fluorescent. Mark catches a whiff of who he has become and which way he’s trending.

The Dissolve: What was the most surprising thing you discovered while investigating the case in terms of how to shape it into a film?

Miller: The first thing that comes to my mind is learning that after du Pont died in 2010, according to his will, he was buried wearing his Foxcatcher singlet in a coffin that contained his wrestling medals from the events like the one depicted in the movie. Though we chose not to include that in the epilogue cards, I considered it for a moment. It informed a lot. It’s just the loneliness and a delusion of that gesture to actually go to that extent, and have a lawyer type it up and implement it. He did it, it happened. He was buried in a singlet. It’s quite an image.

The Dissolve: Your three narrative features have all been fact-based. Is there an attraction to that for you?

Miller: Yeah, I imagine I’ll do non-fact-based films as well, but I’m attracted to stories that are allegorical, but also have a finite, material reality that can be examined. This is one of these stories that I think guards all sorts of truths. If you really stick with it and examine it, it begins to reveal things I can’t imagine anybody fabricating. There’s something very satisfying about creating cinema within the limitation of true events.

The Dissolve: You can fictionalize up to a point, but you have a certain obligation to the truth. How does that inform your thinking about making the film?

Miller: You have to draw a line somewhere, and you have to honor the essential truth of who these people were, and what happened. When considering how to represent a scene or films of a character, you can’t violate a sense of who they were. You can’t do anything that anybody could ever say, “That would never have happened,” or “That could never have happened,” or “That is essentially false.” After Capote, I got a letter from Harper Lee, with whom I had no contact whatsoever, and she sent a three-page letter. It said, “As you must know, so much of what exists in the film did not really unfold in exactly that way, but it is an example of fiction’s ability to achieve truth.” She said, “If you want a quote from me, you can say, ‘The film told the truth about Truman.’” Those are pretty much the guidelines. That’s the standard. That’s the aspiration, that there are essential truths to this story, and to get to that without violating the essence of who these people were, and what happened.