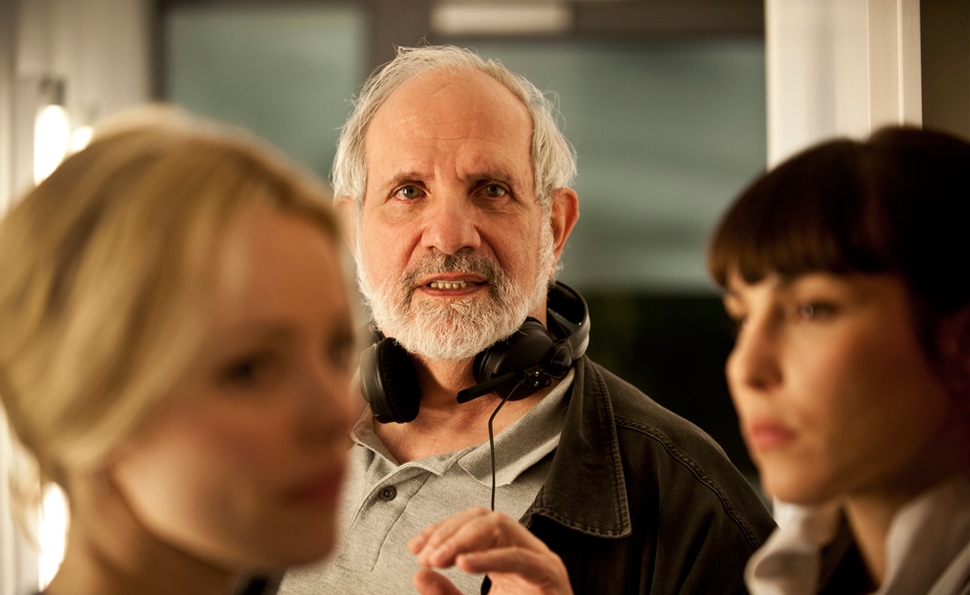 Director Brian De Palma has a made a career of repurposing, recontextualizing, and revitalizing works from the past: a coked-up remake of Scarface, a sound-based twist on Blowup called Blow Out, an homage to Battleship Potemkin’s famed Odessa Steps sequence in The Untouchables, and innumerable nods to his favorite source, Alfred Hitchcock. But he’s never tapped a source as recent as Love Crime, the 2010 French thriller he’s skillfully deconstructed for his new film, Passion. De Palma keeps the original film’s basic premise, with an administrative assistant (Ludivine Sagnier) exacting revenge on her ruthless, manipulative boss (Kristin Scott Thomas), but amplifies the sexual undertones into tawdry overtones.

Stepping into Sagnier and Thomas’ roles, respectively, Noomi Rapace and Rachel McAdams star as ambitious women at an advertising firm whose relationship is frayed by a series of betrayals at the office and in the bedroom. When Christine (McAdams) takes false credit for a breakthrough campaign Isabelle (Rapace) designed, Isabelle launches an affair with Christine’s boyfriend, setting off a series of humiliations and double crosses that end in murder, setting off still more twists and mayhem. De Palma talked to The Dissolve about where Passion departs from Love Crime, the poor state of modern suspense and action sequences, and reconciling himself to releasing his 35mm movie in a digital marketplace.

The Dissolve: Passion is certainly recognizable as a remake of Love Crime, but the two films have striking differences, too. What were you looking to extract from Love Crime, and what did you opt to leave behind?

Brian De Palma: I liked the relationship between the two women, and I more or less let that dialogue play as it was in the original movie. But I thought [Love Crime director Alain] Corneau revealed the murder too early. I mean, you see [the murder], and the rest of the movie becomes kind of a police procedural—a lot of guys talking across desks and explaining all the false clues with a lot of flashbacks. And I felt this was not a good way to do this mystery, so I proceeded to change the whole second half of the movie, and I put a lot of it into a kind of dream reality, where you’re not quite sure whether Isabelle is experiencing these things or dreaming them, since she’s trying to fool herself, the authorities, and the audience simultaneously.

The Dissolve: How did you set about casting the leads, and getting that chemistry right?

De Palma: We were very fortunate with that, because I ran into a director in New York who was talking to Noomi [Rapace] about a film he wanted to do, and he gave me some of her earlier Swedish films, which I quite liked. I of course was quite impressed with her performance in the [Girl With The Dragon Tattoo] series. We approached her, and she very much wanted to do it. And fortunately for us, she had just worked with Rachel [McAdams] on Sherlock Holmes: A Game of Shadows. The girls liked working together, and Rachel liked playing the part of Christine. And when the girls came to rehearse, Natalie Carter—the original screenwriter on the Corneau film—and I kind of adjusted the material to make this rivalry between two women of similar age. 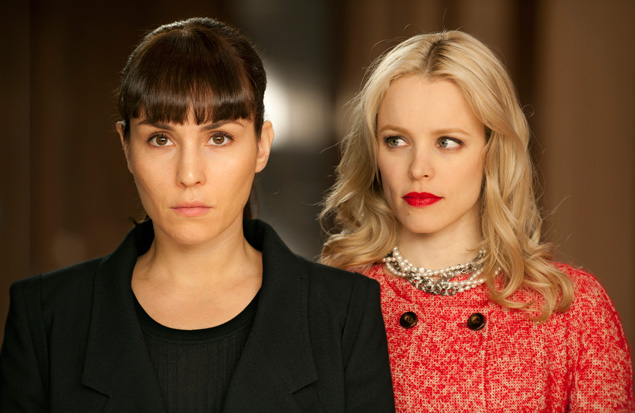 The Dissolve: What particular qualities of the two actors needed to be accommodated?

De Palma: Well, I think the flirting was a lot more suggestive in the Corneau film. But the girls played it more aggressively. Rachel was toying with Noomi all the time, and I thought it added a spicy twist to their whole relationship.

The Dissolve: One of the more compelling aspects of the movie is its office setting, which is this transparent space where people also have hidden agendas. What were you looking to get out of that design?

De Palma: That’s an extraordinary building in Berlin. The whole building was vacant because of the recession. So we were very fortunate to get in there. And it’s a beautifully designed home for these aggressive advertising executives. I scouted many buildings, and we were very fortunate to get that particular one, because the schedules changed, and sometimes the buildings weren’t available. A lot of things happen in movies by happenstance, and you adjust your material to that.

The Dissolve: When you were scouting buildings, this was the type of space you were looking for?

De Palma: An office is an office. There’s a table, and somebody’s on one side of the desk and somebody’s on the other. And there are a lot of scenes like that in the film, so the more interesting space that you could put them in, the happier I am.

The Dissolve: How much interest do you have in technology, and how did that shape what you ended up doing with this film?

De Palma: Oh, I’m fascinated by all the technology—the computers, the Internet, and whatever I see. Because that’s like the fastest-moving thing going on, in terms of developments. Every week, every day something new gets discovered, so that inspired me to make the commercial about smartphones [seen in the film], because they’ve been instrumental in changing the way people relate to each other, like the telephone. [Laughs.]

The Dissolve: It seems such a natural, too, for the type of films you’ve been making your whole career. There’s this different kind of window into people’s private lives—access has become easier. It’s interesting to think about how some of your earlier films might have been affected by today’s technology.

De Palma: I’m sure there’s a Google Glass film in the works somewhere.

The Dissolve: Your work is carefully orchestrated, but where does the planning stop? Are there areas of the production that you like to leave open?

De Palma: This is a relationship picture, and the girls came in to rehearse, and we sort of watched what they did and how they played with the material, and we adjusted the script to their interaction. But in terms of the long, silent sequences, the dream sequences… That’s pretty carefully laid out. I had a lot of time to basically storyboard the whole movie.

The Dissolve: Does it frustrate you as a filmgoer to see the language of a film employed less carefully than that? All that work is elided in a lot of movies.

De Palma: Yes, I would agree. I’m astounded by—whether you’re making a science-fiction movie, a zombie movie, a Star Trek, a Marvel Comics Spider-Man movie—these action sequences that seemingly go on endlessly, without any type of shape or form. So much in action has to do with choreography, and orienting the viewer in where everything is. And I’m amazed all the time that nobody seems to pay much attention to that. So you basically get action and reaction, and it’s like an endless drumming without any shape.

The Dissolve: It seems like they’re trying to make up in sheer, visceral force things that could be done much more elegantly.

De Palma: And obviously, in order to have a crescendo, you have to have some silence. It’s just so simple, but nobody seems to pay much attention to it. They’re basically banging at you constantly. And then in a movie, it’s two hours, too, and then everybody says, “My God, when is this going to be over?” [Laughs.]

The Dissolve: Passion includes a really big split-screen sequence. What was the planning like for that, and what effect were you were looking to achieve?

De Palma: I always wanted to use that ballet. I saw it on video on the Internet. It was shot in the ’50s somewhere with Jerome Robbins’ choreography of Afternoon Of A Faun. And it’s a fantastic idea: ballet dancers in a rehearsal room going through their motions, relating to the mirror, and then obviously culminating in the kiss at the end. And I’ve always wanted to use this piece. I just think it’s so beautiful, and so cinematic. So I had the opportunity to put it into this film. The original movie had Isabelle going to the movies and slipping out the side door, and I put her at the ballet. And I used that tight close-up to make the audience think she was always at the ballet while the murder was going on at the house. 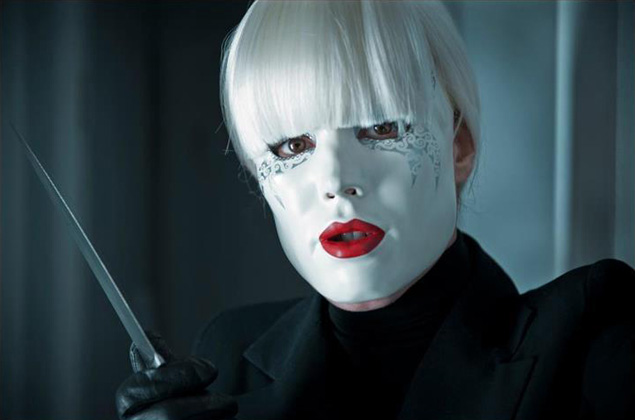 The Dissolve: How do you end up working with the score? It seems to play such a big role in the rhythm. Do you have that on hand before you start cutting it together?

De Palma: It depends on the composer. I started with Bernard Herrmann. And with Bernard Herrmann, you didn’t put a temp track on. He wanted to look at the movie without any music whatsoever. And some composers are like that. [Ennio] Morricone doesn’t like temp tracks. But some composers quite do, because the temp track gives them an idea of what you have in mind. And with Pino [Donaggio], I usually prepare temp tracks, and he writes stuff somewhat in the same style as the temp track. And sometimes it works and sometimes it doesn’t, and sometimes I see where he’s going and I try another, different type of temp track.

I’d say the toughest thing we had to figure out was the scene where Noomi suffers that humiliation and walks down from her office to the garage. We had to figure out how to not make it too sentimental, and at the same time deal with the fact that she’s been demolished. So that was very tricky. We spent quite a lot of time trying to get the exact right cue.

The Dissolve: You’ve been able recently to get several projects financed outside of the Hollywood system. Has that been tough to arrange, and does it become difficult for you to adjust to working on a different scale?

De Palma: Not really. It depends, really, on the material. As Orson Welles said, it’s the greatest model-train set in the world, which is absolutely true. If you want to make those type of movies with that type of size, for me, who can make action and suspense pictures, I absolutely do so. But sometimes, when they’re smaller pieces—I like to work all over the world. I like to use international casts. I’ve made a lot of movies in America—I’ve made movies in Hollywood, New York, Louisiana, Pittsburgh, Philadelphia. You name it—I’ve been in every city in the United States. So I sort of like going to Europe. It was my idea to take Mission: Impossible to Europe; it was originally written for the Midwest. I said to Tom [Cruise], “We can go all over the world with this picture. There’s great actors and big stars in other countries. And there are great locations.” So I’m always looking to do that.

The Dissolve: Passion was photographed in 35mm, but it’s finding its way into the world digitally. Is this a problem for you? Have you reconciled yourself to this new landscape?

De Palma: I’m basically standing in the way of the march of time. I shot it on film, but obviously most things are being released in digital packets, so I’m thinking, “I’m shooting on film, and this is going out digitally? Why didn’t I shoot it digitally? What’s the point anymore?” And the digital processes are getting so good now that I think it’s a matter of time before film is not with us anymore.