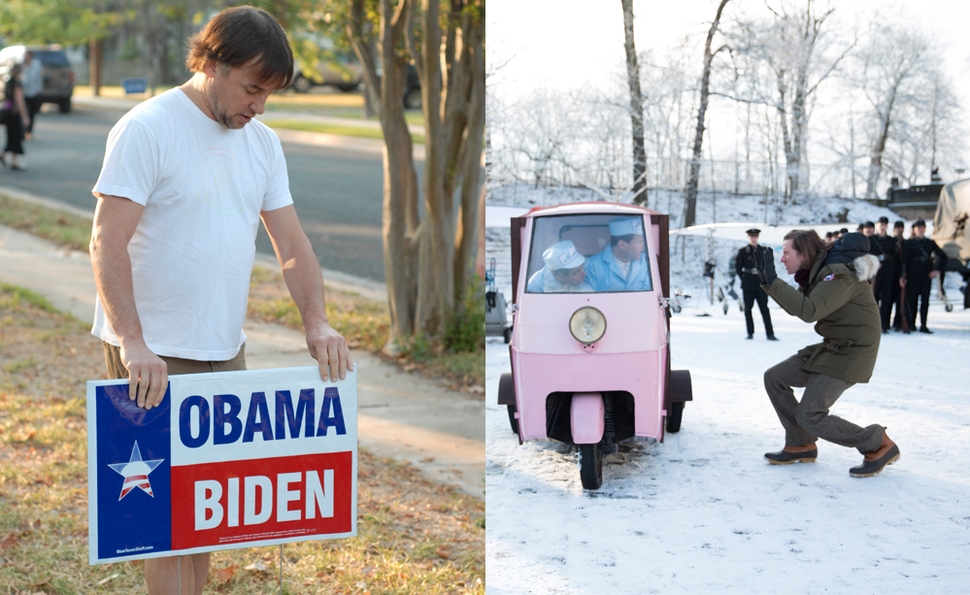 The slow ascents of Richard Linklater and Wes Anderson

When the Academy Award nominations for Best Director were announced on Thursday morning, what most award-season trackers noticed first was who was missing: Ava DuVernay, director of Selma. Had DuVernay made it into the field, she would have been the first African-American woman ever nominated in the category, a designation she would have achieved on a day that just so happened to be Martin Luther King, Jr.’s actual birthday. More importantly, she would have been a very deserving nominee.

Whatever the actual reasons for her getting bumped out of the category, the fact that she wasn’t there felt like a step away from progress. In fact, it was tempting, at first glance, to look at a lot of what happened with this year’s Oscar nods as a rejection of “otherness” and differing perspectives. Clint Eastwood’s American Sniper—a film about a Navy SEAL with a starkly black-and-white view of the U.S.’s role in the Iraq War, made by an industry veteran and perennial nominee—received six nominations. The four acting categories were filled with nothing but white faces. The directing category, too, would have been a whitewash, were it not for Alejandro Iñárritu, director of Birdman, who is Mexican. As usual, that category was devoid of women.

As always, it’s important to take note of these things as markers of the ways in which Hollywood continues to fall short in terms of diversity. But it’s just as important to look a little more deeply at the places where long-term commitment to unconventional, outside-of-the-norm approaches were rewarded.

Which brings me to Richard Linklater and Wes Anderson. I know, I know. Two white guys who are beloved by a lot of white-guy film critics: Can you believe their time has finally come? But there really is something inspiring and fitting about these two—both born in Houston, Texas, both with filmmaking roots in Austin, both who began as staunchly indie filmmakers in the 1990s—receiving their first nominations for directing in the same year, for movies so emblematic of their differing sensibilities.

Given the media affection often heaped on Linklater and Anderson these days, some may find it strange, in 2015, to think of them as outliers of the mainstream. But 20 years ago, that’s exactly what they were. Go back to the mid-1990s, around the time of Linklater’s Before Sunrise, and Anderson’s debut, Bottle Rocket. The filmmakers winning Oscars for Best Director in that era were people like Robert Zemeckis (Forrest Gump), Mel Gibson (Braveheart), and Anthony Minghella (The English Patient). True, films with darker edges and off-kilter approaches—like Quentin Tarantino’s Pulp Fiction and the Coen brothers’ Fargo—managed to score Oscar nominations, too. But back then, you would have needed access to a flux capacitor to predict that Linklater and Anderson—each then making movies that seemingly could not be reviewed without use of the terms “Generation X,” “slacker,” or “offbeat”—would one day both be up for the industry’s highest filmmaking honor, and that Linklater would be considered the frontrunner to win.

Both Linklater and Anderson have matured as artists over the past two decades. But reassuringly, in both Boyhood and The Grand Budapest Hotel, it’s still easy to see evidence of the same spirit that infused their earlier work. To borrow and twist that oft-quoted Matthew McConaughey line from Linklater’s Dazed And Confused, these directors both have gotten older. But they’ve also stayed the same age.

Linklater, now 54 and with 16 major features to his credit, hasn’t exactly shunned the studio system. School Of Rock and his remake of The Bad News Bears were both mainstream comedies that hit all the expected beats, but were shot through with enough subversiveness to make Linklater’s fingerprints on them pretty obvious. Still when you think of his filmography, the works that jump to mind first are Dazed And Confused, the Before movies, or Waking Life, narratives that feel experimental, that meander, that allow conversations to unfold, then rest, then reboot again. In these movies and others, Linklater makes us think that what we’re watching is unfolding organically, even though a great deal of planning, scripting, and filmmaking prowess is behind every set of cinematic parentheses. He’s a guy known, above all, for making movies that revel in taking their own sweet time. There is no greater expression of that ethos than Boyhood, a movie that sprawls out over a 12-year period, capturing small moments, slowly, then ultimately placing them on a large canvas that allows the audience to feel their collective weight.

Despite their Texas and ’90s-era connections, Anderson’s filmmaking approach, at least on the surface, is wildly different from Linklater’s. Where Linklater invests great effort in making his stories seem effortless, the deliberateness of Anderson’s efforts are seen, felt, heard, and practically smelled in every meticulously sculpted frame of his movies. It’s what his detractors find too twee about his work, but those who love it (myself included) find most admirable about it. Unlike Linklater, Anderson—now 45 and with eight features on his directorial CV—has been backed by a major studio as distributor on nearly all of his projects, from Rushmore through Grand Budapest Hotel. But like Linklater, he has managed to stay true to his extremely particular set of skills, right down to his fixation on handwritten letters, quick pans, and the presence of Jason Schwartzman. His filmmaking style is so recognizable that it has inspired online Bingo games, an extremely on-point SNL send-up, and last weekend’s line from Amy Poehler about him arriving at the Golden Globes “on a bicycle made out of antique tuba parts,” which was a joke that people actually got, and laughed at, because that is how widely understood Wes Anderson’s work has now become.

Like Boyhood, Grand Budapest Hotel feels like the fullest realization so far of that work. As film and TV critic Matt Zoller Seitz, author of The Wes Anderson Collection as well as a follow-up book about Grand Budapest, noted in this recent New York Times article: “It’s kind of every Wes Anderson film stacked one on top of the other, like a wedding cake.” But while its visual composition and production design are every bit as painstaking as they are in Anderson’s other films, there’s a sense of lightness and fun in Grand Budapest Hotel that both serves the material and smartly undercuts any sense of pretension. It’s a seriously made film that doesn’t take itself too seriously.

When we think of the kinds of movies traditionally thought of as Oscar bait, or the kinds of established filmmakers who seem pre-destined to win Academy Awards, it seems fair to say that Boyhood, The Grand Budapest Hotel, Richard Linklater, and Wes Anderson don’t really fit that stereotype. (Other than, of course, being both white and male.) Neither of these filmmakers ever makes anything that could be called Oscar bait. Neither they nor their films appear dipped in a desire for prestige. These guys just seem to enjoy the process of capturing the visions in their mind’s eyes and preserving them on film. That they have finally been recognized at such a high-profile level, without compromising those visions, makes it actually seem possible to succeed in an industry that too often seems set in its own established ways.

Now, will that provide any comfort to those who really, really wanted to see an African-American woman receive much greater due this Oscar season? Probably not. But for those looking for some sign that non-conformity and unwavering commitment to one’s artistic integrity are actually worth a damn in Hollywood … Well, the presence of Anderson and Linklater on that Oscar ballot means something, at least.