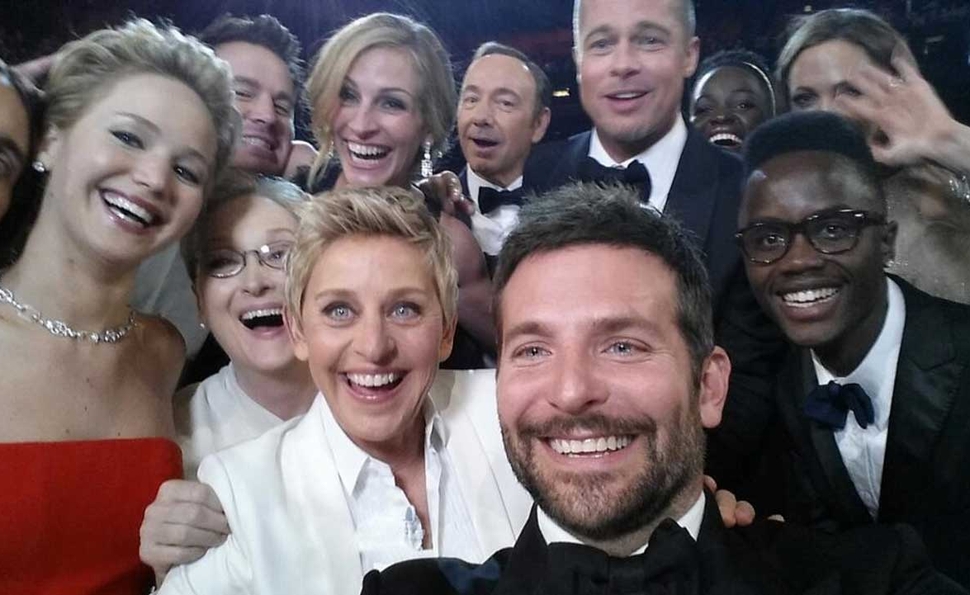 A final focus on the Academy Awards

Many words were spoken during this year’s Academy Awards. Some were inspiring (Lupita Nyong’o’s acceptance speech), some were amusingly honest (host Ellen DeGeneres wryly noting that either 12 Years A Slave would win Best Picture, or the entire Academy would be deemed racist), and some were just incomprehensible (John Travolta introducing us all to the “wickedly talented,” nonexistent Adele Dazeem).

But only one photo emerged as the signature image of Oscar night 2014: that mass celebrity selfie orchestrated with sloppy but endearing pseudo-spontaneity by DeGeneres. So much smiling stardom was packed into that single cellphone pic: Meryl Streep, Julia Roberts, Bradley Cooper, Jennifer Lawrence, Brad Pitt, the upper half of Angelina Jolie’s face, part of Lupita Nyong’o, much more of Lupita Nyong’o’s brother. It was a snapshot that immediately went viral by design, and that seemed unintentionally symbolic of the Oscars at its most narcissistic: “We’re all here to celebrate the movies—and look how adorable we all look while celebrating ourselves.”

But not everyone, or every relevant piece of information, got included in the picture. Jared Leto, now officially an Academy Award winner, got cut out of the shot. Another photo snapped by Ben Fritz of the Wall Street Journal revealed that Liza Minnelli—also an Academy Award winner, and the daughter of Judy Garland, who was honored later that night via a Wizard Of Oz tribute—got crowded out of the selfie by the taller famous people in front of her. And media stories published later that evening and the day after the Oscars confirmed that the whole stunt was really just a commercial for the Samsung  Galaxy.

In that way, the Oscar selfie really was the perfect expression of how we, as a culture, process the Academy Awards in 2014: with the knowledge that not everything fits in the frame. We understand that the Oscars themselves are really just a long, glittery, unnecessary-montage-laden product placement for the movie industry. We accept that, and even revel in the showmanship and occasional genuinely moving moments that the sales pitch involves. In Hollywood productions, shilling is okay, as long as it’s cleverly done. (This also explains why everyone loves The Lego Movie so much.)

But once that ceremony is over, we want the real story, the truth behind the artifice, the making-of documentary behind the big movie about the beauty of making movies. Ultimately, we care as much about who didn’t win and what wasn’t said during the Academy Awards as we do about the winners and the comments made on live television. The way we analyze the Academy Awards—running them through the unique filters of our social-media feeds and online media preferences—confirms that.

Anyone who has covered the Academy Awards for a major news organization knows when the biggest spikes in Oscar-related web traffic occur: not in the days leading up to the Academy Awards, nor during the ceremony itself, but the day after, when everyone hazily starts trying to piece together the reality of what they spent nearly four hours watching the night before. We are a much savvier pop-culture-processing population than we were 20 years ago, or 10; we have instant access to all kinds of windows into the world of Hollywood’s biggest night. The lead stories of this year’s Oscars, objectively speaking, was that 12 Years A Slave won Best Picture (marking the first win in that category for a movie directed by a black filmmaker) and that Gravity picked up the most statuettes, including the first-ever Best Director Oscar for a Latino, Alfonso Cuarón. But once the Oscars have been run through your particular unique filters, the lead story may become something different.

For some, the breaking/heartbreaking news of the night was that Leonardo DiCaprio failed to win an Academy Award for the fourth time, leading to a flurry of Twitter trending topics (#PrayforLeo, you guys) and Internet memes (this one was my favorite) that naturally culminated in a Buzzfeed round-up. For others, it was the usual but no less disheartening acknowledgement that some memorable actors and artists got left out of the In Memoriam segment. (This year, the omitted included Dennis Farina and Tom Clancy, but unfortunately not the song “Wind Beneath My Wings.”)

Still others fixated on the obviously chilly relations between 12 Years A Slave writer John Ridley and director Steve McQueen, who declined to acknowledge each other as they walked to the stage and in their acceptance speeches. (According to The Wrap and other sources, including helpful Dissolve readers, the lack of friendliness stems from a long-simmering feud over whether they would share credit on the 12 Years A Slave screenplay. As Ridley’s Oscar win demonstrated, the credit went to Ridley alone.)

Then there was all the hubbub over the Frozen Singer Who Shall Not Be Named Correctly, Idina Menzel, whose name-botching by John Travolta may be remembered far longer than the names of many of the winners at this year’s Oscars. The twisting of Travolta’s tongue that resulted in the birth of Adele Dazeem has, so far, yielded piles of media coverage, a very popular Slate Name Travoltifier, a David Letterman Top 10 list, and, most likely, a Saturday Night Live sketch that’s being furiously assembled as we speak. This is all good news for Idina Menzel, who is getting more press out of this than she would have if Travolta had simply said her name correctly.

And then there was this gem of a story from The L.A. Times, which pointed out that two Academy members anonymously confessed to voting for 12 Years A Slave for Best Picture without actually watching it. Granted, two people is hardly an overwhelming majority. But the idea that actually watching the Best Picture nominees doesn’t even qualify as a prerequisite in some voters’ eyes throws a pretty massive shadow over the whole concept of being an Oscar winner, as Dissolve news editor Matt Singer noted here.

Over and over, the Academy Award moments that turn into talking points and ongoing online narratives are the things that happen on the periphery, behind the scenes, on the edges of the Oscar-night selfie. But what about the movies? What about the cinema? When the Oscar nominations were announced back in January there was, as always, a great deal of hand-wringing—including right here at The Dissolve—over who and what got “snubbed.” Where was Inside Llewyn Davis? Tom Hanks? Whither James Franco in Spring Breakers?

The Academy Awards are a wonderful opportunity to squeeze films that sit outside the frame into the big picture, to make wider audiences aware that, in addition to 12 Years A Slave and Gravity and American Hustle, 2014 also gave us lovely gems like The Spectacular Now and Short Term 12. People who love movies may be cynical about the Oscars, but they believe in the Oscars enough to still loudly wish every year that it could be more inclusive, that the true “little guys” could break through the marketing-campaign blitz and be mentioned alongside the indies with Matthew McConaughey’s name above the marquee. 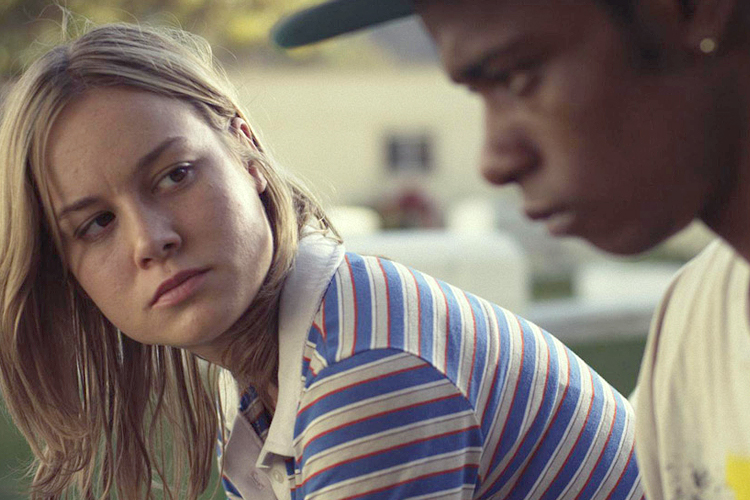 I still wish for that, too. But after covering awards season this year, in this space, and after covering the Academy Awards for more than a decade as a digital journalist, I also recognize that the Oscars really do have the capacity to extend beyond one night, and beyond the high-profile winners. Watching the ceremony really can prompt some people, in the days that follow, to seek out the nominated animated shorts, or go watch the Academy Award-winning foreign-language film The Great Beauty, or, dammit, dig into Inside Llewyn Davis to find out why so many of their Twitter friends were mad that some song called “Please Mr. Kennedy” wasn’t performed during the Oscar broadcast.

When I was a kid obsessing over the Oscars, I couldn’t have done any of that, because the technology simply wasn’t there. Now, curious moviegoers who want to dig deeper into the films acknowledged or unacknowledged by the Academy just need a few bucks and access to iTunes. If just 20 out of the 43.7 million people who watched Sunday’s Academy Awards engage in some post-Oscar digging, I consider that a victory.

Even on Oscar night itself, if you look closely around the edges of the frame, it’s possible to see something beyond the gowns, the pre-ordained winners, and all that well-orchestrated Hollywood glitz. Take the Google Play commercial that ran during Sunday night’s telecast. Yes, I know, I know: another commercial. But within that promotional spot for yet another work of technological wizardry—which, naturally, can be used on a Samsung Galaxy phone—there was a brief mention of Short Term 12, that “shoestring-budget indie flick,” as Google Play pitchman Robert Downey Jr., described it, that also was totally overlooked by the Academy.

Short Term 12 didn’t get a mention during the Academy Awards. It wasn’t nominated for anything. None of its stars walked the red carpet. But on Oscar night, those foster-care kids still managed to get in the picture. And in the fractured media world we live in, where movies can reach people via so many channels, just pushing your way into the frame is sometimes enough.