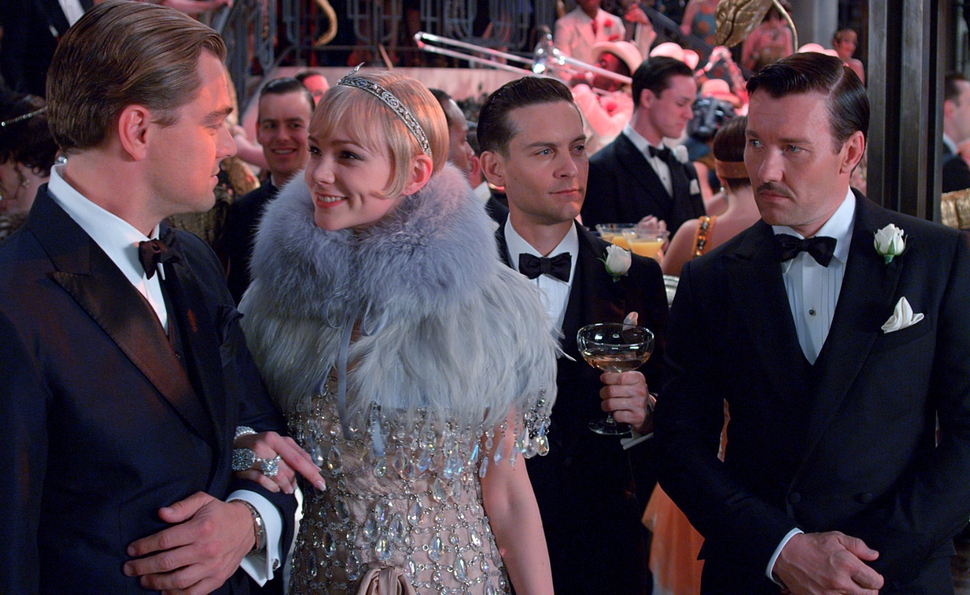 Since 1967, when costumes for black-and-white and color film were permanently combined into a single category, the Oscars in this field have consistently rewarded refined, occasionally flamboyant old-fashioned fashions. Or, to put it another way: If a movie features umbrella-wide hoop skirts, elaborately beaded bodices, and/or waist-cinching corsets, there’s a good chance its costumes will win an Academy Award. (For evidence, see Anna Karenina, or The Young Victoria, or Marie Antoinette, or The Age Of Innocence, or… Oh, just look at the whole list of Best Costume winners since 1967.)

It isn’t surprising, then, that the five 2013 Best Costume Design competitors are all period pieces, albeit not exactly of the petticoats-and-powdered-wigs variety. This year’s field covers pre-Civil War America (12 Years A Slave), a sweep through China and Hong Kong from the 1930s to the 1950s (The Grandmaster), pre- and post-Dickensian England (The Invisible Woman), the Roaring ‘20s (The Great Gatsby), and the unbuttoned-to-the-navel late 1970s (American Hustle). They’re each worthy of an Academy Award, and collectively, a reflection of how difficult it is for contemporary work to make the Oscar costume cut.

The fact is, when a movie is set in the present, the relatively recent past, or even the not-so-distant future, its costumes tend to get overlooked during awards season. That isn’t because the designers who work on those films are any less creative, painstaking, or character-driven in their approach. It’s simply because, by nature of the stories they’re telling, their clothes tend to be less showy than, say, the fancy-dress wardrobes a Gatsby requires. 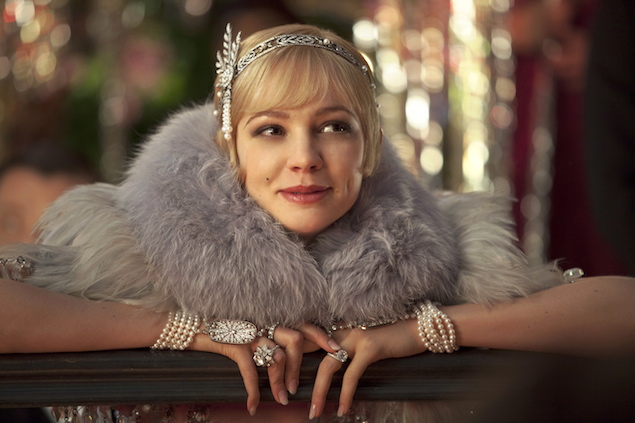 In any movie, the actors’ ensembles should never distract from the narrative. But especially in a contemporary film, where the motion-picture everyday should at least vaguely resemble the audience’s everyday, the clothes are often dialed down by design. Take a modern-day movie like Blue Jasmine, which is dotted with elegant Chanel jackets and expensive handbags that serve as reminders of the cushy lifestyle Jasmine comfortably draped herself in for years. Or look at the endless parade of plaid button-downs worn by virtually every man in Nebraska, a flannel commentary on the no-nonsense, proudly basic sensibility of the film’s place and its protagonist, Bruce Dern’s Woody. Both films feature costumes that speak to tone, character, and subtext, but those costumes don’t necessarily wow the viewers. They aren’t supposed to; they should be so familiar and real that they barely register. The problem is that “familiar and real” usually doesn’t capture Oscar voters’ attention.

The same rule applies to period pieces from a period not so long ago, like the 1990s, as portrayed in The Wolf Of Wall Street. Designer Sandy Powell, who already has three Oscars to her credit (for Shakespeare In Love, The Aviator, and The Young Victoria), was perceived as a potential contender for that film, but was ultimately overlooked on nomination day. Again, that may be because, while Leonardo DiCaprio’s pinstriped power suits and Jonah Hill’s hideous wannabe-preppy pastels qualify as 1990s, they aren’t so blindingly retro that they call excessive attention to themselves. (Plus, with so many other things demanding attention in The Wolf Of Wall Street—orgies, flying little people, DiCaprio all dopey on ’ludes—the clothes inevitably fight a losing battle.) As Powell told The Daily Beast, “Recent history is actually very difficult to re-create. We are not far enough away from it to see it clearly.” In other words, Powell may have faced an even greater period-piece challenge than other designers did, one she meets so effortlessly that most people probably won’t even notice.

Now let’s consider this question: What was the one article of clothing in a 2013 motion picture that, above all others,  jumped off the screen and demanded to be noticed? If you answered, “Why, the high-waisted, Ed-Grimley-esque slacks worn by Joaquin Phoenix and Chris Pratt in Spike Jonze’s Her, of course!”, you are correct. Ironically, those pants and the whole rumpled nerdy aesthetic owned by Phoenix’s Theodore Twombly wound up in the film because they functioned as period pieces within Her’s technologically fast-forwarded Los Angeles.

Designer Casey Storm told Vulture that those signature high-cut pants were actually based on a pair from the 1800s, noting that people discomfited by the OS-dominated society Jonze depicts, “might… go in the other direction and start finding comfort in things from time periods gone by.” In other words, Her is a futuristic love story, dressed in period-piece clothing. Nonetheless—despite the fact that its costumes inspired a real-life line of clothing—the Academy took no notice. Like the iconic little black dress worn by Audrey Hepburn in Breakfast At Tiffany’s—which also wasn’t nominated for a Best Costume Oscar— Her’s high-waisted pants will be forever remembered, but never rewarded.

Actually, strike that: They won’t be rewarded at the Academy Awards. But it’s possible the pants could receive some recognition from the Costume Designers Guild, whose annual awards will be handed out on February 22, two weeks before the Oscars. The Guild, which has recognized costuming achievements in individual films and TV shows since 1999, has always done something the Academy doesn’t: divided its movie awards into categories that separately recognize contemporary, period, and fantasy designs. The women and men in the industry recognize that each genre and time period requires different skills, and try to honor all those skill sets.

It would be too much to ask the Academy to break down its costume category in a similar way. If it won’t do it for Best Picture, surely it wouldn’t (and probably shouldn’t) do so for Best Costume. But it would be nice if Academy voters would notice the greatness in some of the contemporary designs the guild has recognized—this year’s aforementioned Her and Nebraska, Skyfall (last year’s winner), the 2002 winner The Royal Tenenbaums—and considered whether that type of greatness should break through the marble ceiling of period-piece costuming.

Now, back to this year’s deserving, though unsurprising, Oscar costume slate. Of the five nominated films, the current conventional wisdom—based on predictions at Indiewire and Gold Derby—suggests that the contest comes down to 12 Years A Slave, American Hustle, or The Great Gatsby. Much like the Gold Derby majority, my money is on Catherine Martin’s gorgeous Gatsby creations, for three reasons.

1. Costume nominees that are also up for Best Picture have recently lost more often than they’ve won.

Admittedly, this is the weakest of my rationales for choosing Martin. Certainly Best Picture nominees, even winners, have picked up Oscars for Best Costume before—as recently as two years ago, when The Artist won. But during the past decade, more often than not, voters have gone for a film that wasn’t vying for the big prize, and didn’t receive that many nominations overall. That suggests that Academy members may view Best Costume as an opportunity to spread the statuettes around a bit, which may give Gatsby an advantage.

In many behind-the-scenes categories—Cinematography, Visual Effects, Sound Editing, Direction—women continue to be woefully underrepresented. That is not the case in Best Costume Design, where in 17 out of the last 20 years, a woman has either won herself, or as part of a design duo. This is probably due to the fact that women tend to outnumber men in the costuming field, just as men outnumber women in… well, just about everything else in the entertainment industry. I’m not sure that anyone consciously votes in this category based on the gender of the nominees. But the fact that a female usually wins may, statistically speaking, point to Martin or 12 Years A Slave’s Patricia Norris over American Hustle’s Michael Wilkinson. (Bonus fun fact: If Martin wins for The Great Gatsby, she’ll be the second designer to win an Oscar for the costumes in an adaptation of The Great Gatsby; Theoni V. Aldredge won for the 1974 version of the Fitzgerald riches-to-death saga. Bonus-bonus fun fact: Martin’s previous Oscar, for 2001’s Moulin Rouge!, also marked the second costuming Academy Award for a movie called Moulin Rouge. The first one was for the 1952 film, which did not feature a medley of U2, Paul McCartney, and Kiss songs performed on top of an elephant.)

3. The Great Gatsby costumes are the prettiest of the three.

As shallow as it may sound, beauty matters a lot in this category. Part of the reason films like Anna Karenina or Marie Antoinette tend to triumph here is because their clothes are head-turners, the kind of sumptuous masterpieces of formal finery that draw oohs and ahs. 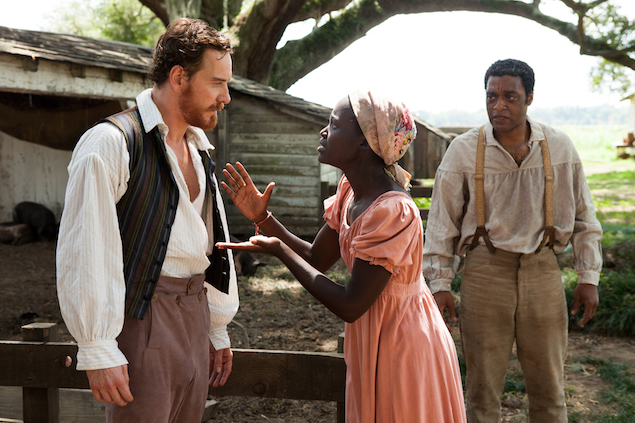 The costumes in 12 Years A Slave feel authentic to their time period, while subtly illustrating Solomon Northup’s fall. He quickly goes from a man with status and a proper blazer to a slave living under a false name, with only the wispiest, tattered cloth to cover his back. But as in some of the films mentioned above, Norris’ clothes are so subtly effective that voters may bypass them.

There’s nothing subtle in the costumes for American Hustle. This is a movie in which people smoke-and-mirror each other to get what they want, and wear a lot of eyes-down-there-while-I’m-conning-you-up-here clothes: dresses with plunging necklines, bowties the size of small buses, comically lush furs that scream, “I have banking connections.” They also get the period just right, and, in their appropriately tacky way, qualify as eye-poppers. Which is why Hustle could very well win on Oscar night. But there’s just one thing about Wilkinson’s work: It isn’t exactly pretty. It’s often glamorous, deliciously retro, and completely in sync with the characters. But beautiful? That’s obviously in the eye of the beholder, but that doesn’t seem like quite the right word. 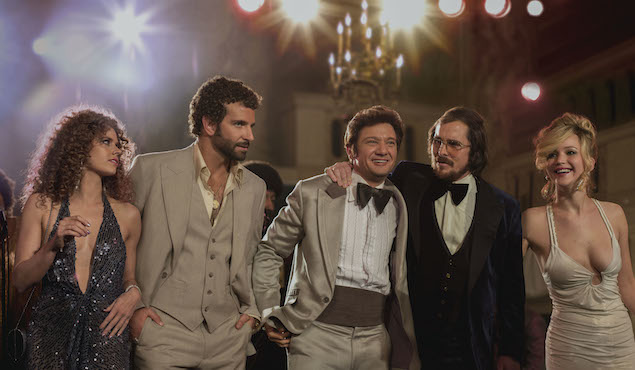 Martin’s designs, on the other hand, evoke oohs and ahs: frocks dripping in beads and sequins, wispy skirts reminiscent of flower petals, soft pink suits that make Jay Gatsby look like the brightest spot of masculinity in the room. In a story that’s so much about material things— that focuses on a man and woman who are in love with each other, but almost equally enamored of the man’s prodigious shirt collection—the clothes are crucial. Martin gets them right in a way that’s as recognizably 1920s as a flapper outfit, and as modern as Baz Luhrmann’s Jay-Z-ified vision demands. That Art Deco-ish head wrap Carey Mulligan wears while cavorting with DiCaprio, for example: It looks vintage, but it’s so easy to imagine wearing it in the present, fans might even be tempted to search for a knock-off version at H&M or Modcloth—or even make their own.

Martin is responsible for costuming a period piece, yes, but with Luhrmann, she also took a classic story and dressed it up in the now. That particular combination—a pretty past that almost looks like the present—may be what wins over Oscar voters. If it does, let’s hope it also moves the Best Costume Design competition an inch closer to reflecting what it looks like to have contemporary style.