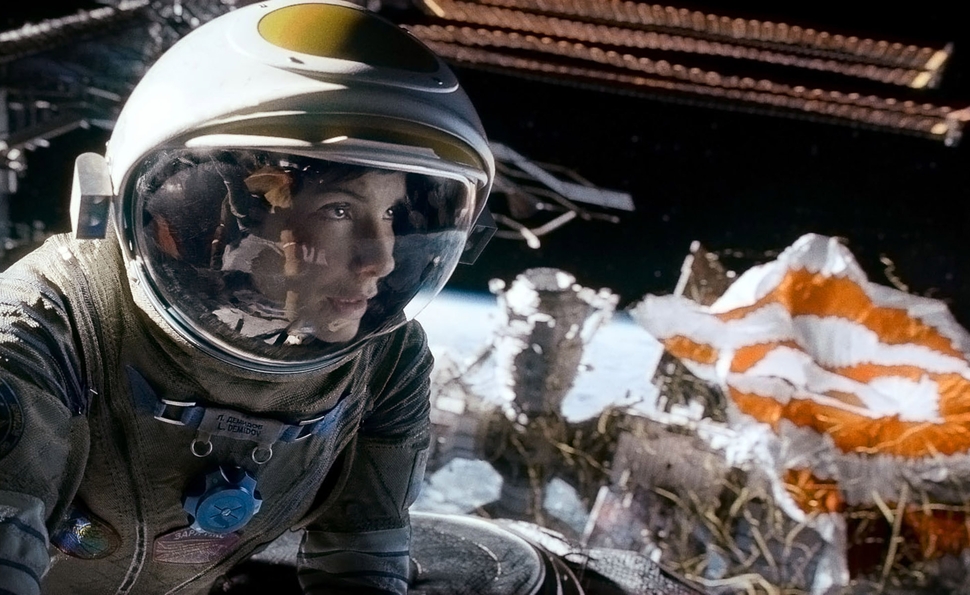 The pulls and perils of early Oscar prognostication

Recently, the statuette-tracking website Gold Derby published a list of the five reasons Gravity will win the Oscar for Best Picture. It suggested, among other things, that Gravity’s overwhelmingly positive reviews, use of 3-D, and star power in the form of George Clooney and Sandra Bullock make it an impossible film to beat as we lurch forward into the belly of the awards-season beast.

What the list failed to mention, however, is that the Academy Award-winning best picture of 2013 was already declared more than a month ago. It’s 12 Years A Slave, according to Vulture’s Kyle Buchanan and other film journalists who were so awestruck after screenings of the Solomon Northup story at the Telluride and Toronto Film Festivals that they decided to drop the mic on the Oscar race nearly six months before the ceremony. The proclamation, “Your Best Picture Winner Will be 12 Years A Slave,” naturally, was followed by The Wrap’s Steve Pond issuing his own five-reasons list, which explained why 12 Years A Slave is no Oscar lock.

Welcome to awards season, that magical time when the Internet produces reams of prognostication, pontification, and sometimes wild conjecture about which motion pictures are most worthy of being rewarded with shiny, golden trophies. It’s that annual moment when the cinematic experience sometimes feels less about art and more about turning film into the equivalent of fantasy football, where scores are kept and actors and directors become players either surging ahead in the rankings, or falling behind. But it’s also the moment in the year that ushers in the most vocal, lively conversations about releases of substance and quality. For cinephiles, it’s both the worst and best of times.

Let’s begin with a discussion of Gravity and 12 Years A Slave, which have already become the front-runners in a Best Picture face-off that won’t officially become real until the Academy Award nominations are announced in January. There are more potential contenders ahead—American Hustle and Saving Mr. Banks, among others—that could turn this into a more-than-two-movie race. But right now, social-media conversation and chatter among fellow journalists suggests that this is the cinematic sensibility test of the moment: Are you Gravity for Best Picture, or are you 12 Years A Slave? 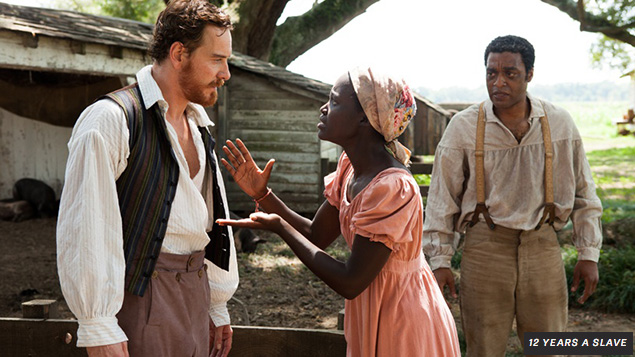 It’s an absurd choice to be forced to make. Gravity and 12 Years A Slave are wildly different films. One flings its audience into the vastness of space, where 3-D adds a sense of depth to the dangers of missile debris and the possibility of spiraling, untethered, into the great darkness. The other keeps its audience earthbound, relying on neither bells nor whistles to tell its wrenching tale of one individual’s harsh transformation from free man into brutalized servant. Approaching these films as one vs. the other initially seems like an almost pointless exercise. Gravity is a moving marvel, while 12 Years A Slave is two hours and 13 minutes of unflinching heartbreak. Viewers are likely to leave the multiplex touched and altered by both.

Yet after seeing 12 Years and contemplating how it might be measured against Gravity, what most struck me were the underlying similarities between the two films, commonalities I might not have noticed if the “Gravity or 12 Years A Slave?” question wasn’t already rattling around in my head. (Spoilers ahead, so if you haven’t seen both movies and want to remain blissfully ignorant about their plot points, proceed with caution.)

Both Gravity and 12 Years A Slave are survival stories. Both focus on protagonists trapped in an elsewhere far away from home. Under very different circumstances, both Sandra Bullock’s Ryan Stone and Chiwetel Ejiofor’s Solomon Northup have been separated from their children. While the tone and filmmaking styles differ, both Alfonso Cuarón and Steve McQueen make frequent use of tight close-ups that illustrate these characters’ struggles via the changing contours of their faces. In a particularly odd coincidence, both Ryan and Solomon are rescued, in a way, by mega movie stars from the Oceans franchise, reminding the audience once again that George Clooney and Brad Pitt are Hollywood’s real saviors. And both films conclude with a deserved, heavily fought-for reunion that finally places the protagonists on familiar, comforting ground. If some Academy voters wind up screening these two movies as a double feature, they’ll make total sense together. But I doubt it will make choosing between them any easier.

It’s possible to find commonalities between these stories and other current awards-season fare, too. In a recent New York Times piece, critic A.O. Scott argued that “survival is the theme of the season,” citing Gravity, Captain Phillips, and All Is Lost as evidence. Perhaps that recurrent survivalist theme speaks to something larger in the zeitgeist, a sense that, given the economic struggles of recent years, we’re all hanging on by a thread, and finding sweet release in watching others hanging on by even thinner ones. Perhaps that theme is just a weird narrative coincidence in a fall movie season filled, happily, with intense examples of essential viewing. Or maybe my observations and Scott’s just prove that if someone looks hard enough, it’s possible to find overlap in far more movie narratives than we take the time to notice.

In any case, while Captain Phillips and All Is Lost may well find themselves on the Best Picture nominees list, Gravity and 12 Years A Slave have been positioned as the two dominant forces ever since the Toronto International Film Festival cemented their status as the dueling masterpieces of the moment. Both are films of great artistry, quality, and higher purpose. But as far as which one will ultimately win an Oscar, Academy history and common sense suggest that 12 Years A Slave has an edge. 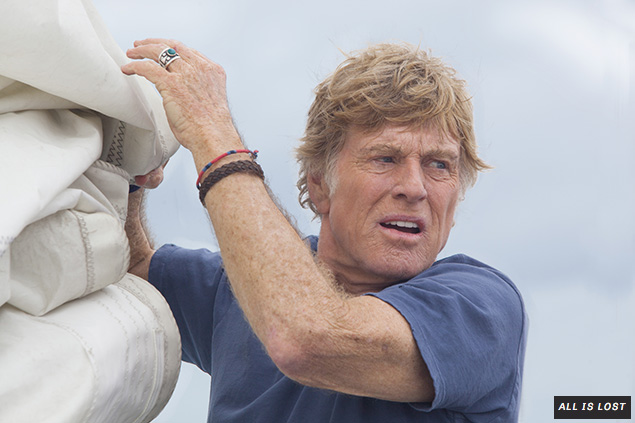 While it’s valid to argue that Gravity isn’t a science-fiction film, its outer-space setting may place it in that genre in some observers’ minds. Unfairly, as this post from Den Of Geek points out, films with a science-fiction bent don’t win Best Picture. Stanley Kubrick was nominated (and lost) as Best Director for 2001: A Space Odyssey, but the movie itself didn’t even make the Best Picture nomination cut. Star Wars did make the cut, but was beaten out in the 1978 Academy Awards by Annie Hall. In a loss that actually fueled my lifelong interest in the Oscar race, Steven Spielberg’s E.T. surrendered the Best Picture prize to Gandhi in 1983. Even astronaut dramas that have competed for Best Picture—The Right Stuff, Apollo 13—have been vanquished by films of a more Earthbound nature (Terms Of Endearment and Braveheart, respectively).

More recently, in a 2010 Best Picture race often characterized in advance as an either-or option, Avatar was bested by The Hurt Locker, though many thought Avatar was an Oscar-winning slam dunk. Citing its massive run at the box office as a prime factor in its favor, a pre-Academy Awards 2010 Vanity Fair piece argued that the popularity of James Cameron’s Na’vi saga would ultimately carry it over the top. “Go back through Oscar history and between two frontrunners (Dances With Wolves/Goodfellas; Titanic/L.A. Confidential; The Departed/Little Miss Sunshine) the bigger box-office winner tends to take the gold,” wrote John Lopez. That argument currently sounds pretty persuasive for Alfonso Cuarón’s little space movie, with Gravity having just enjoyed its third consecutive week as the No. 1 movie in America. Except for one thing: Avatar lost. That’s the problem with trying to read the Oscar Magic 8 Ball: Sometimes it appears to say “You can rely on it” when the actual message floating in the murky dyed-blue water clearly states, “Ask again later.”

Still, it’s useful to look back at the trends in Academy voting, and the snubbing of science fiction is certainly a legitimate trend. But it doesn’t mean voters will definitely dismiss Gravity, a film both technically thrilling and so transcendent of genre that it may not be subject to SF bias. But it may be harder for Gravity to overcome 12 Years A Slave’s subject matter. Steve McQueen’s capacity to immerse audiences in one of the ugliest chapters in American history makes his film feel like an important cinematic milestone, in a way that Gravity, for all its greatness, can’t entirely match. If the Oscar race really winds up coming down to these two, that may be the factor that tips the scale toward 12 Years.

In addition to never rewarding an SF film, the Academy also has never given the Best Picture title to a movie about slavery. Gone With The Wind won in 1940, but that sweeping Civil War saga is as much about slavery as Life Of Pi is a docudrama about the history of mathematical constants. Denzel Washington won Best Supporting Actor in 1989 for Glory, Edward Zwick’s look at an all-black Army unit fighting in the Civil War to free their fellow men and women down South, but the film was left out of the Best Picture race. Same goes for Amistad in 1997, which admittedly was more of a courtroom procedural about slavery than an immersion into the lives of actual slaves. Last year, two films that dealt with slavery—one tangentially (Lincoln) and the other with Quentin Tarantino’s signature humor and bloodlust (Django Unchained)—were both nominated for Best Picture and failed to snag the prize.

And yet Academy voters have repeatedly demonstrated special respect for historical drama. And when one comes along that seems like the definitive commentary on an unfathomable injustice—like Schindler’s List—it’s pretty hard for them to ignore it. 12 Years A Slave looks like it could be that movie this awards season. The fact that films about the black experience have frequently dominated the cultural conversation this year only adds to the sense of relevance around McQueen’s movie. From an outsider’s perspective, it’s as though circumstances have handed Academy voters the perfect opportunity to finally shine a cinematic light on the historical ugliness of racism, while also incidentally rewarding a movie that was artfully made under challenging circumstances. To put it simply, this feels like 12 Years A Slave’s moment.

Let’s pause and consider, for a moment, where we were a year ago in the field of Oscar punditry. On October 12, 2012, Vulture’s Oscar Futures column, written by Buchanan, suggested that Ben Affleck’s prospects for a Best Director nod were on an upswing, but still didn’t have him in the final list of predicted nominees. (Good call.) That column also said that Argo’s future in the Best Picture race was pretty much secured. While Buchanan didn’t pronounce Argo the winner—last year’s field felt much too open and fluid for such premature declarations—it was easy early on to see the potential for that to happen, so much so that Affleck’s absence from the Best Director category felt like a shock, even though Buchanan and others suggested it well in advance.

While it still may feel a little too early to proclaim that the Best Picture race is already decided, it’s pretty easy to see 12 Years A Slave’s potential to claim victory. Still, there are four-plus long months of campaigning, forecasting, and Oscar columnizing ahead of us. As we saw during the Best Picture race that was supposed to be about Brokeback Mountain and wound up being about Crash, things can change. For the record, I’ve just asked my Oscar Magic 8-Ball whether 12 Years A Slave is already our winner, shaking that plastic, retro sphere with the proper forcefulness and Academy Awards prognosticating authority. Still, the plastic die inside appears to be stuck between two responses: “You may rely on it” and “Reply hazy, try again.”