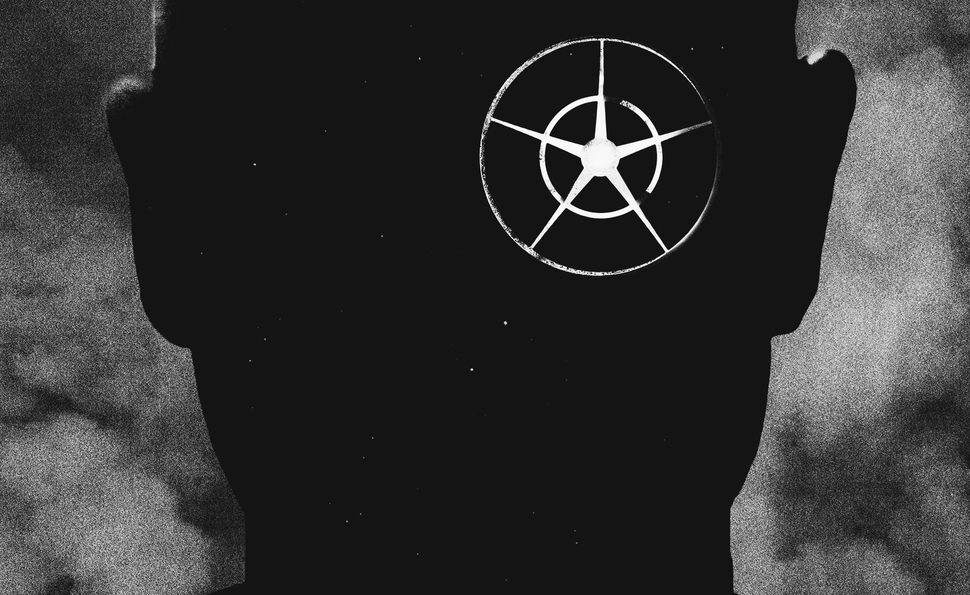 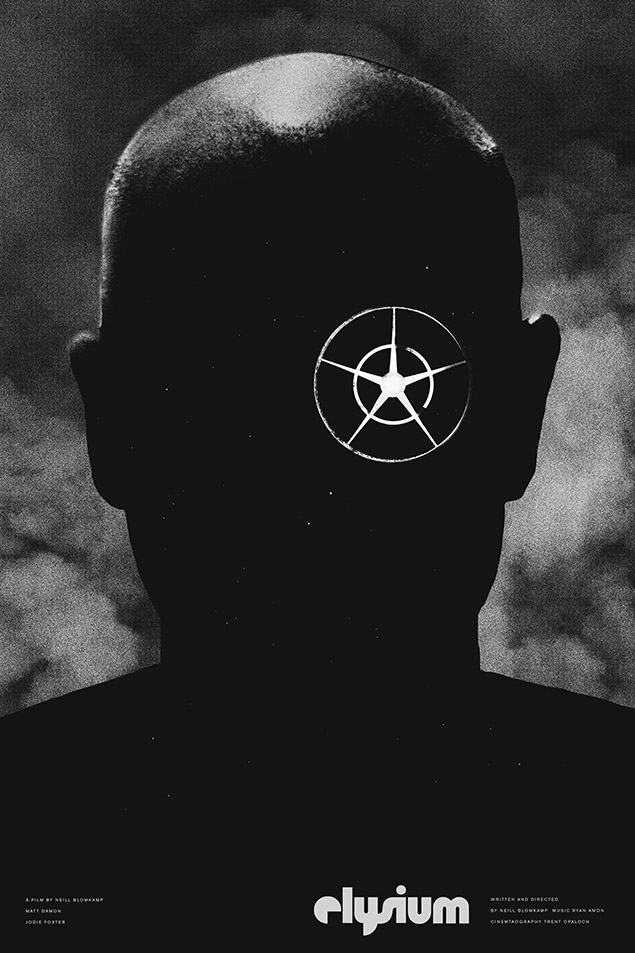 For my second original poster design for The Dissolve, I looked ahead to Neill Blomkamp’s Elysium, a film I haven’t yet seen. Typically, when designing film artwork, I spend a lot of time with the film itself. For a new release for a studio or distributor, it would be practically insulting to not look at the film before designing a poster. Designing a DVD cover for a classic film, I’ve usually already seen the film. Then I watch it again and again to understand it further and develop a strategy to my design.

By contrast, the Cuban, Polish, and Czech poster artists who created so many designs I love often never even watched the films. Commissioned to create advertisements before the age of streaming or screeners, they were given a movie title, the directors and stars, the genre, and maybe a bit about the film’s plot or premise, and they let their imaginations run wild from there. This resulted in odd, unexpected conceptual interpretations that we’re still admiring today. I thought it would be a liberating exercise to take their lead and try designing some posters for new movies without seeing them first.

I knew just the basics about Elysium, having seen the trailer and poster: In a dystopian future, Matt Damon plays an Earth-dweller who rises through various strata to reach an orbiting biodome that houses the elite, transforming himself physically into some kind of heroic killing machine along the way. That seems to be the gist of it, at least.

Elysium is the rare original science-fiction premise that makes movie fans giddy with anticipation, and I channeled my own excitement into this piece. The composition is dominated by a darkened image of Matt Damon’s head, and in the place of one of his eyes sits an icon of Elysium itself, the type of ring-shaped space-habitat—first imagined in 1975 as the Stanford torus—common to sci-fi’s greater visual lexicon. To help further convey the idea that this is a science-fiction film, I imagined a sleek, chunky title treatment and a dusty, monochrome color palette.

But it’s in that eye space where I wanted to convey a certain idea: Elysium is in Damon’s sight, so to speak, in that it’s the hero’s destination. But by altering something about his face, particularly his eye (the ultimate symbol of vision, perception, identity, and, for me, cinema itself), I can suggest a story of transformation, of a hero becoming one with something beyond his world and gaining a new way of seeing. This visual theme is something I took from a host of Polish poster designs that used the human head as a canvas, exploring themes of transformation. After all, what movie isn’t about someone being transformed? 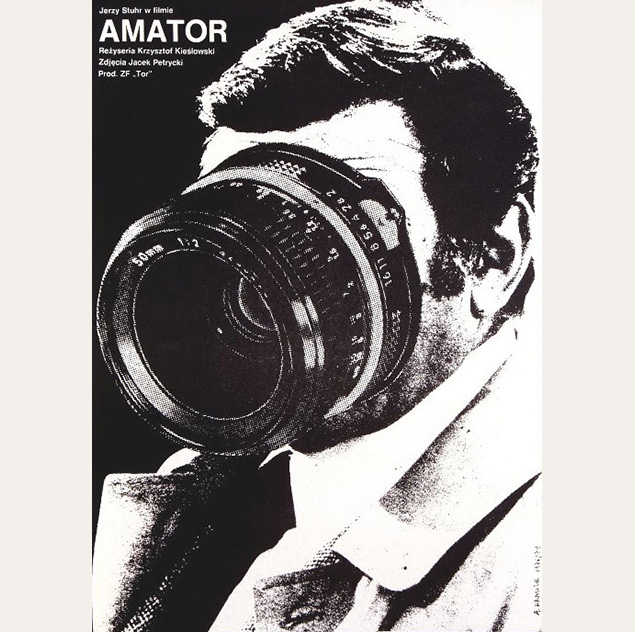 Posters featuring big floating heads have been ridiculed and vilified after years of Hollywood abuse. (IMP Awards even made a gallery of Tom Cruise posters sorted by head size; incidentally, one of the only interesting “big head” posters in the bunch also features a transformed eye.) But the Polish poster masters exhibited an incredible about of creativity with the image of the human head—enough to put the head stigma to rest for good, if you ask me. This poster for Kieslowski’s Camera Buff, designed by Andrzej Krauze, was probably one of the first Polish posters I saw, and it set the tone for what I would discover to be an interesting fixation on the transformed, often grotesque, human head specific to Polish poster design. Such a poster is shockingly clear: seeing this, we understand the film to be about a man transformed by a camera, to the point where his “normal” identity is unrecognizable. It’s a simple, striking conceptual design. 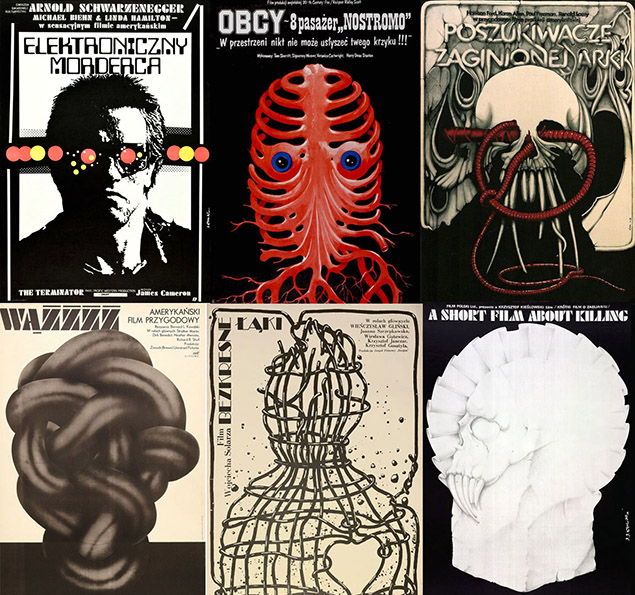 Artist Jakub Erol designed some of the most iconic, bizarre Polish posters, like these for The Terminator, Alien, and Raiders Of The Lost Ark (top row), all featuring a central bust and transformed eyes. Erol enjoyed a monochromatic color palette too, transforming the human bust into strange conceptual visions in these posters for SSSSnake, Bezkresne Laki, and Kieslowski’s A Short Film About Killing.

Waldemar Swierzy is another Polish poster artist with an apparent fixation on the head. His compositions became more and more uniform throughout his career, with the head taking up as much of the frame as possible, only to be abstracted and transformed into something else.

And then there’s Franciszek Starowieyski, who stands alone in a distinctive and original style more than many Polish poster artists. His hand-painted posters are macabre, nightmarish visions of transformation, and often focus on the human head in a way that curiously complements the designs of these other artists. 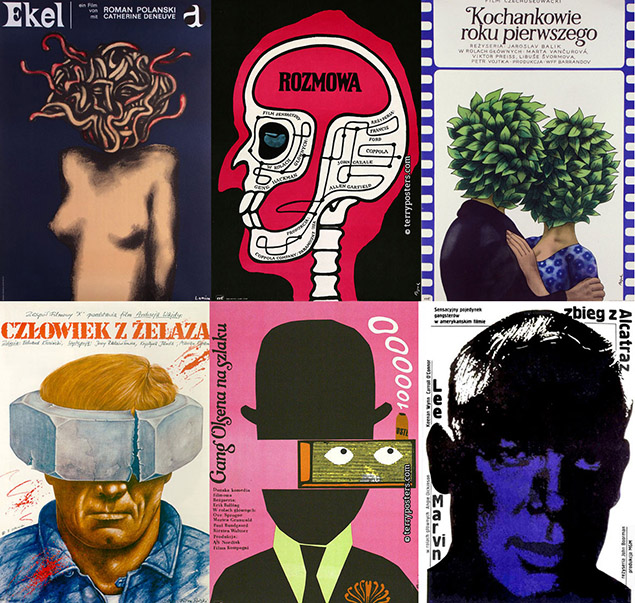 This specific visual theme continues throughout Polish film and theater posters of the past several decades, as seen in the above designs by Jan Lenica, Jerzy Flisak, Rafal Olbinski, and Bronislaw Zelek. Why did the Polish designers, more than anyone else, return again and again to the image of the transformed head? Perhaps they influenced one another. Not once, in all of these designs, are we allowed to see the pure, unvarnished face of any character. Instead of marketing the face of a movie star, they market the face of a character transformed almost beyond recognition by the forces and conflicts of story. It’s an approach I’ve always been attracted to, and one that has guided many of my own designs, including the Criterion cover for Charlie Chaplin’s Modern Times and a series of prints based on Martin Scorsese’s films. 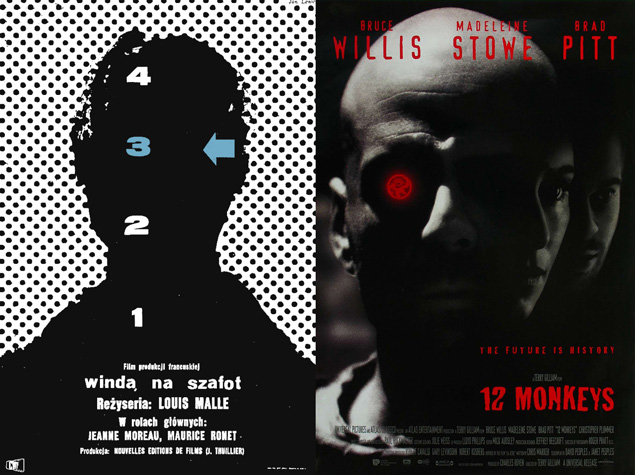 As I was finishing the Elysium design, two other posters popped into my mind that I now realize were undeniable influences: Jan Lenica’s iconic design for Louis Malle’s Elevator To The Gallows, and the original U.S. theatrical poster for Terry Gilliam’s 12 Monkeys. Thematically, I’m not quite sold on the idea that these two posters are as strong as others; Elevator uses the vertical strip of digits to put us only loosely in the mind of a criminal; 12 Monkeys sees a somewhat-abstract design compromised by the need to flaunt its stars’ names and faces. But both designs show us their protagonists not as we imagine them on the marquee, but transformed (with the eye as the nucleus of the image) into a state that intrigues us and speaks more to the psychological and narrative cores of the film. I humbly share them as influences I have worn on my sleeve since 1995, and continue to still.