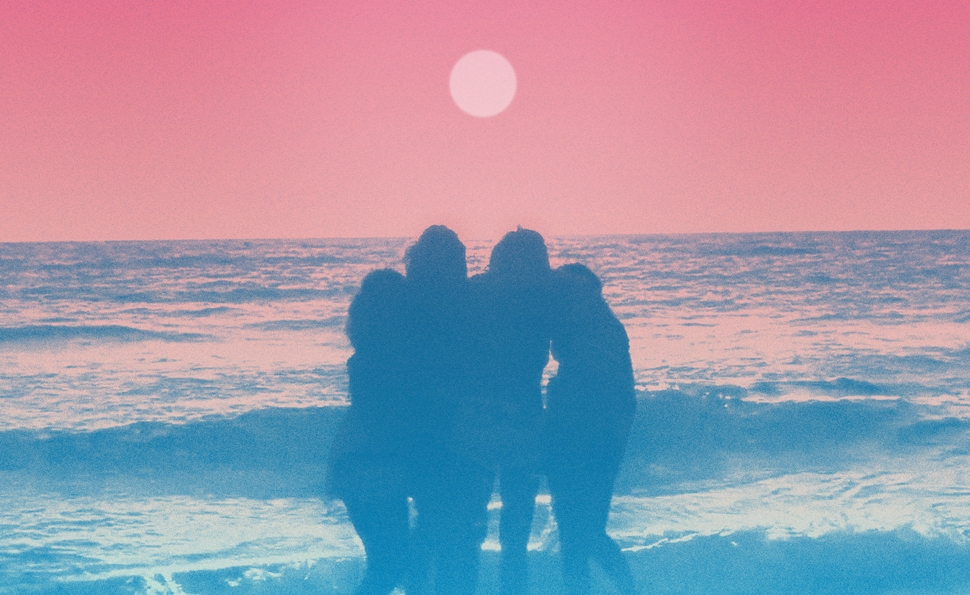 Spring Breakers gets the psychedelic poster it deserves 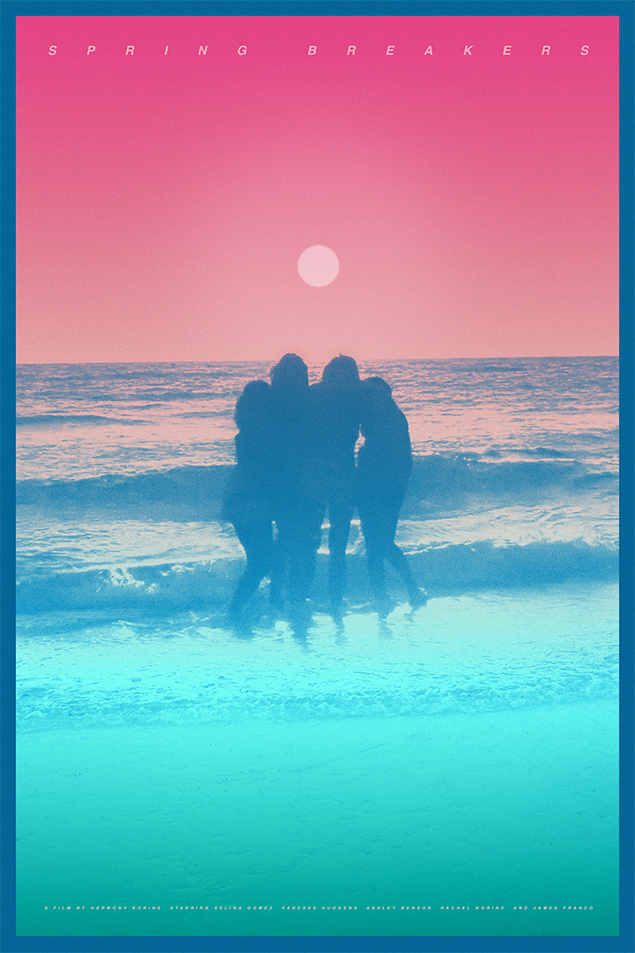 To rope my monthly column into the rodeo of year-end list-making, I’ve designed a commemorative poster for the movie that (as of press time) tops my list of favorite films of 2013: Spring Breakers, Harmony Korine’s impressionistic vision of four contemporary American youths lost on a dark, hallucinatory escapade. I loved the aesthetic qualities of Spring Breakers—the editing and sound design, its color palette of candy-colored neons sprinkled over dark landscapes—and the truly dreamlike realm it explored, where beauty and horror overlap. Naturally, I wanted to create a psychedelic poster for film so psychedelic, but I wanted my design to match the film’s surface beauty, to embrace what’s so appealing about the imagery and colorful visual language the film uses. The image of the four friends on the beach at sunset (one of many looping scenes throughout the movie) was instantly iconic for me, a picture-perfect postcard view of these characters on the literal shores of discovery. I imagined this shot as a poster when I first saw the film, and when I started experimenting with the image, I noticed it also has some interesting abstract qualities: the figures seemingly merged together as four parts of a whole, the glowing sun some kind of beacon holding or uniting them.

Inspired by Benoît Debie’s cinematography and the wonderfully art-directed wardrobes, I imagined a pop color scheme that wouldn’t feel out of place in Lisa Frank’s office. I applied that to a more trippy, sparse, and structured composition inspired by my love for Japanese designer Tadanori Yokoo and his beautiful use of colors that shift in long gradients from one vivid hue to another. 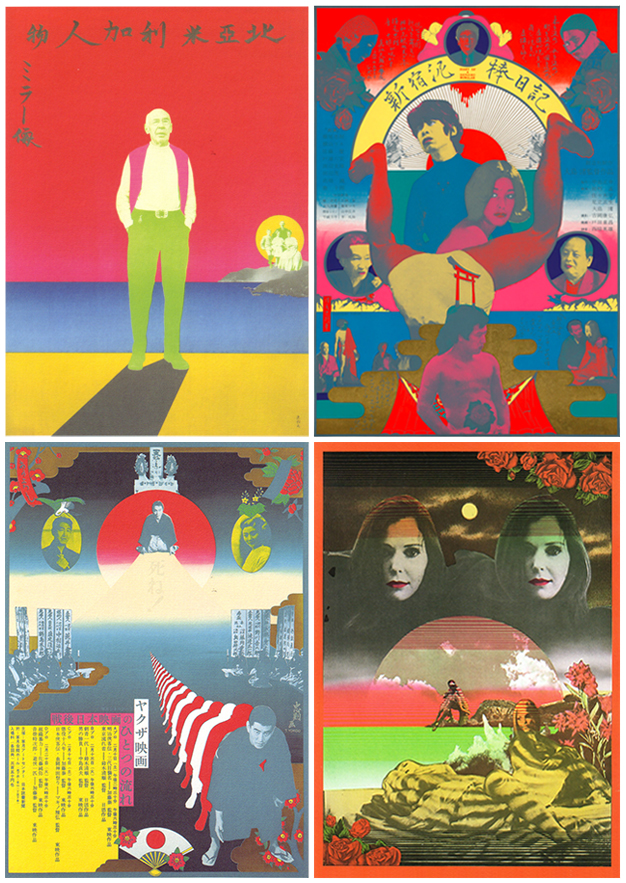 Yokoo’s compositions were usually packed with information on different scales, but some pieces were more minimal and allowed for his great color fields to have maximum impact, like in the top-left poster for a Henry Miller exhibition. He designed many personal posters and pieces for musicians and bands, but just a few movie posters, seen above: for Diary Of A Shinjuku Thief, a Yazuka film poster, and one of three posters Yokoo designed for Roger Corman’s The Trip.

But what was I saying about list-making season? Let me take the rest of this month’s column to highlight some great works in theatrical movie poster design in 2013. There were more than 10 posters I wanted to feature here, but let’s just say this: It would have been way easier (yet way more painful) to come up with a list of the worst posters designed this year. I’ve never been one to focus on the negative, though, and the movie poster world needs all the encouragement it can get.

Here are my 10 favorite movie posters designed this year, and with them a note of technicality, as we stand in a rapidly rising stream of movie poster art: While fans, illustrators, independent designers, and print boutiques like Mondo continue to curate outstanding and fun takes on contemporary and classic movies, I happen to be most curious about how and if that sense of artistic daring can be reintegrated into the industrial poster world, to help promote the theatrical (or home) exhibition of new or retrospective releases, and to do so in aesthetically compelling and progressive ways. So while there are a dozen or more designs I’ve loved this year for classic movies made by some of my favorite artists, I’ll try to leave those off this list. With Mondo working more and more with studios on officially licensed designs that have their own sizable role to play in the marketing of a new movie, there’s some overlap with the mainstream in their case. (Or at least the mainstream audience for a particular, niche arthouse documentary… just keep reading and you’ll see what I mean.) 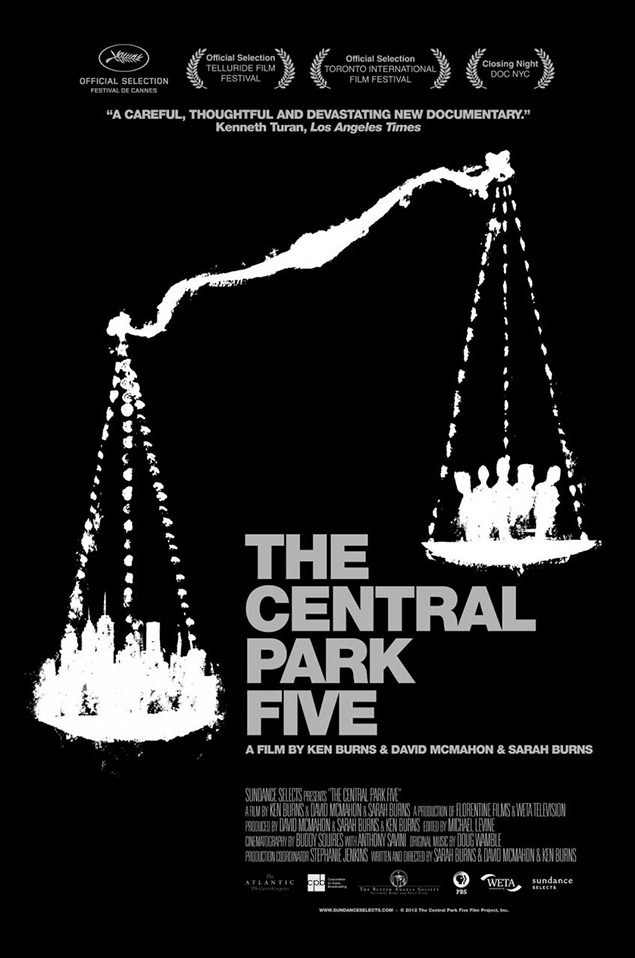 Here’s a nice and simple two-color design from Brandon Schaefer, a self-made poster artist who’s had quite the year designing handfuls of posters for Sundance Selects, Cinedigm, and other assorted boutiques and theaters. His clever visual icon for this documentary—a genre that always has trouble inspiring great poster art for a myriad of reasons—is the kind of minimal illustration you might normally find on a book cover, but would never be considered by a studio for a one-sheet. Kudos to Sundance Selects for giving this documentary its own interesting visual identity. (I’ll save Schaefer’s kudos for later in the piece.) 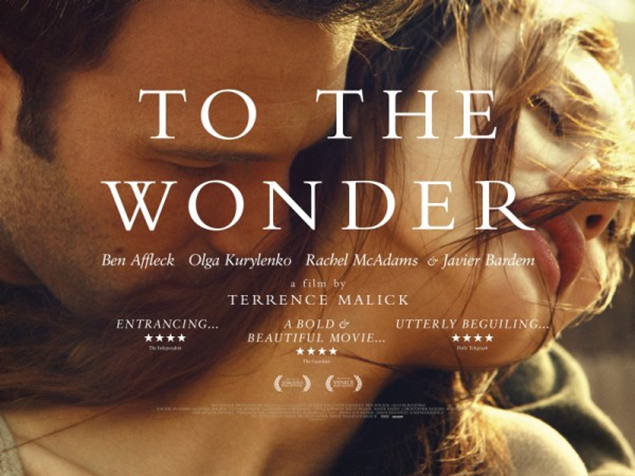 9. To The Wonder, designer unknown

I like the U.S. one-sheet by Criterion artist/Steven Soderbergh’s right-hand poster-man Neil Kellerhouse, but it was the U.K. quad poster design that really felt united with Terrence Malick’s film to me. Maybe the quad (horizontal) format just sometimes hits me like a breath of fresh air, but I love the way this designer pulled off the much-used, even cliched, type-over-image trick—a beautiful and stately combination of type and photography. 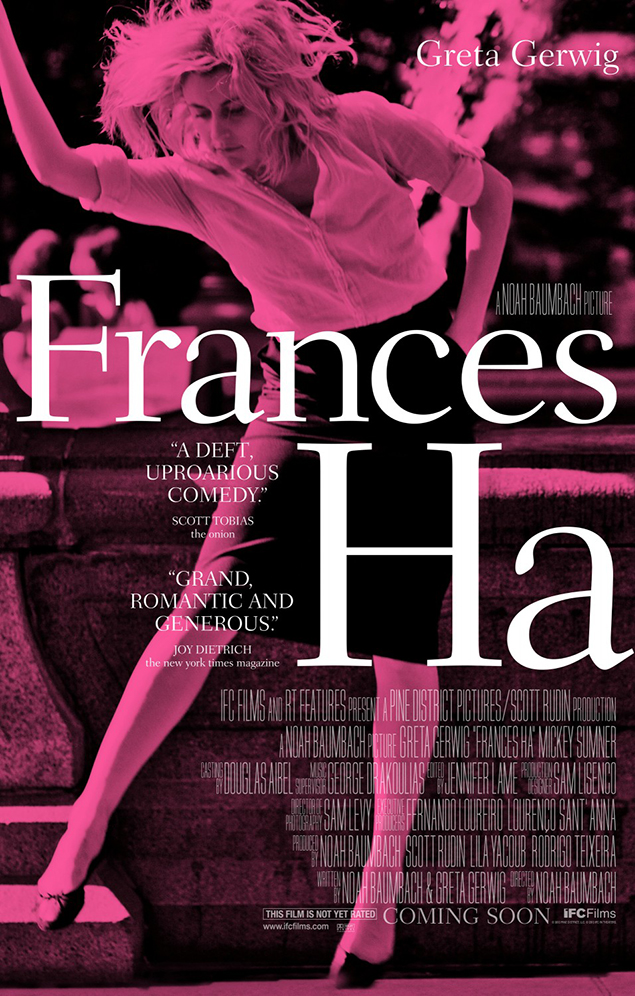 Sticking with the image-plus-type combo but coming from a possibly different point of inspiration: Thanks to Belle and Sebastian, we know that high-contrast, duotone photography with bold white type can look really lovely together when done right. BLT Communications is credited for this design, but I’d love to know what individuals were responsible for branding this film in such a memorable way. 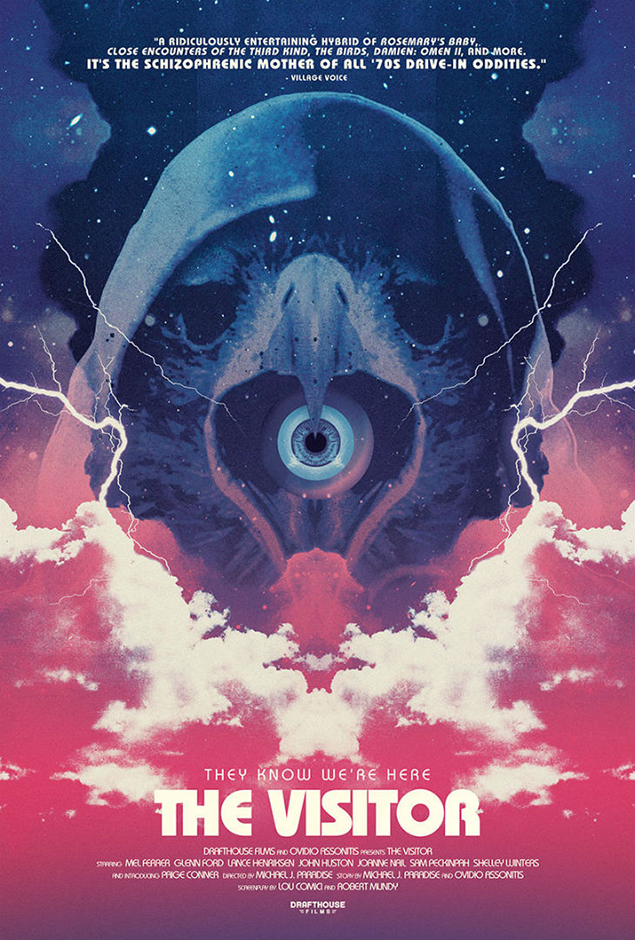 In addition to posters for Bastards, Berberian Sound Studio, Gimme The Loot, Trouble Every Day, and Simon Killer (which could have easily made this list), this year Brandon Schaefer also churned out this new one-sheet for Drafthouse Films’ theatrical re-release of The Visitor, the latest word-of-mouth, batshit-crazy B-movie spectacular that has to be seen to be believed. Drafthouse let Schaefer go hog-wild with the film’s imagery to create this colorful and psychedelic one-sheet that just begs to be viewed in a movie-theater lobby. Schaefer shared this design process in his own regular column over at Film.com, which features a nice bonus interview with Jay Shaw. Shaw created his own Visitor design for Mondo this year, as well as an ongoing series of striking screenprints for the monthly underground film presentations at The Light and Sound Machine (curated by James Cathcart in partnership with Third Man Records and The Belcourt Theatre). Since I’m looking for every opportunity to cheat here, check out my favorite Jay Shaw design of 2013, for Seventeen, at Kingdom of Nonsense. 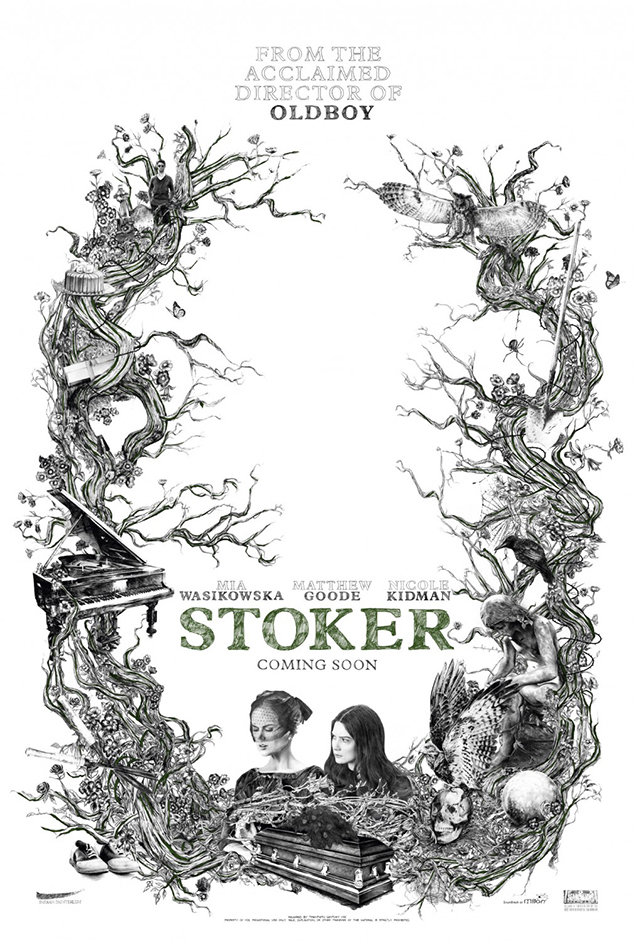 These days, international posters aren’t always more interesting as a rule, but in this case the international approach to Stoker’s poster is far more interesting than the one-sheets produced here in the States (some of which poorly crib elements from this design). An incredibly detailed work of pen-and-graphite hand work, here’s Exhibit A in the case for great, old-school fine art being used in official movie advertising today. The poster is credited to the larger Empire Design agency, but the individual artist is inexplicably uncredited, even in this video showing the artist at work. 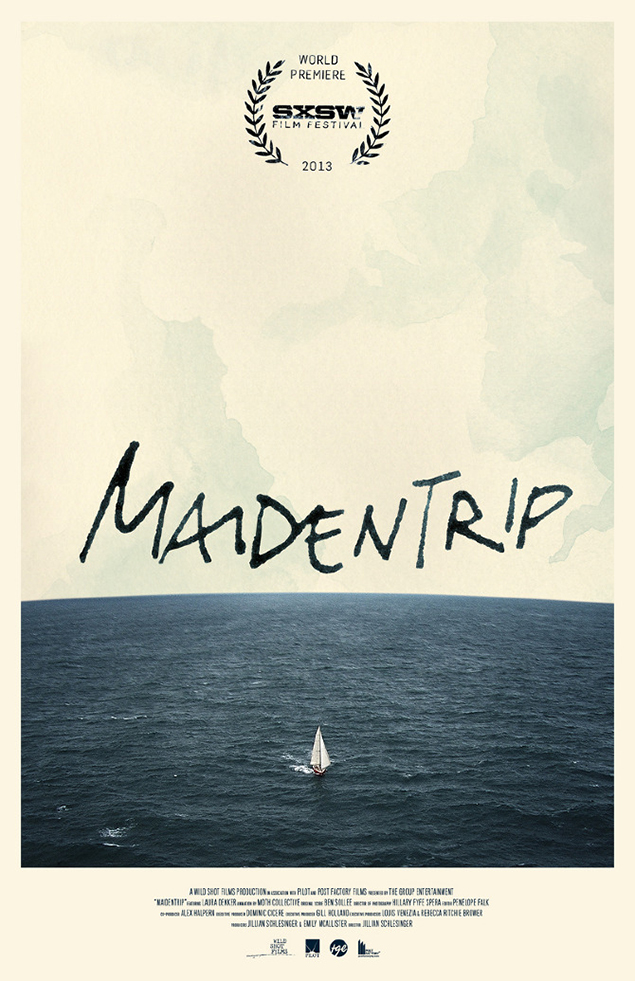 On the smaller festival circuit, audiences might have caught the wonderful and inspiring Maidentrip, a documentary about a young girl who sailed around the world that I’ve described to friends as the closest spiritual equivalent to a live-action Hayao Miyazaki film. When I first saw this one-sheet, it hung in the poster gallery at SXSW, sticking out like a diamond in the rough amid dozens of amateurish festival posters seemingly printed (and designed) at Kinko’s the night before by the gaffer’s boyfriend. To stand out in a film festival you need a great film, but a great poster doesn’t hurt, either. This gorgeous design by Leah Koransky creates a humbling sense of scope and isolation more effectively than any of the posters produced for this year’s survival-at-sea features. 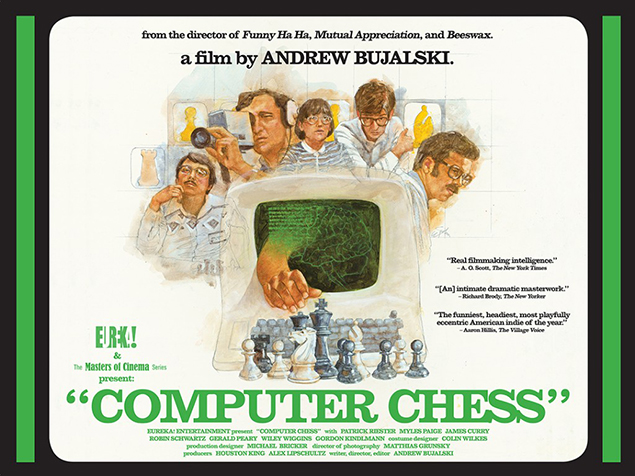 To finish out this list, I’m going to make an effort to prove that contrary to popular belief, fine artists—you know, painters, illustrators, anyone who isn’t a 26-year-old with a computer—haven’t been completely wiped from the face of the movie poster world they once dominated. In fact, some studios are hiring the actual guys that made art back then to make advertising art again now. That’s the case with Cliff Spohn, who painted this U.K. quad illustration for Andrew Bujalski’s wonderful Computer Chess decades after creating original artwork for Atari’s first videogames (like this rad cover for Defender). Not to diminish Spohn’s contribution to this design, as the guy has illustrated professionally for hundreds of clients in his incredible career, but I’m curious who put the type together on this for Masters Of Cinema. It really solidifies this design as a nostalgia home-run. 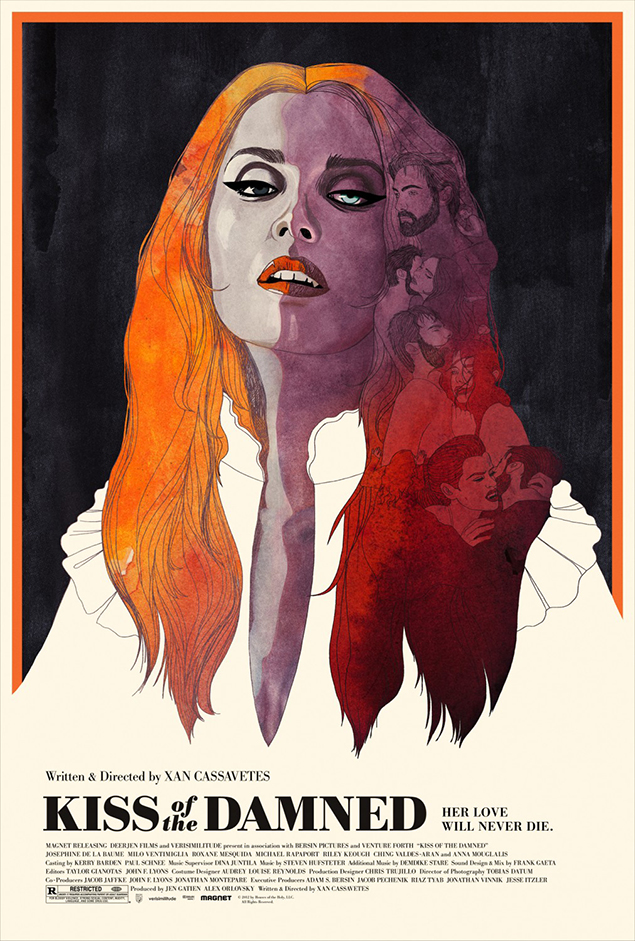 3. Kiss Of The Damned, Akiko Stehrenberger

SXSW also premiered this poster for Xan Cassavates’ underappreciated, Jean-Rollin inspired Kiss Of The Damned, painted and designed by Akiko Stehrenberger. It won the festival’s poster award, but Stehrenberger also famously won the honor of Adrian Curry’s Movie Poster of the Decade for her photo-realistic, perfectly designed one-sheet for Michael Haneke’s Funny Games remake. More link candy here, where Stehrenberger talks to Curry about the process and inspiration behind this poster, and lists her own favorite movie posters of all time. In addition to the alluring and prismatic illustration here, I must single out in particular the beautiful painted texture of the black background, a warm antidote to the countless faux textures favored by too many of today’s armchair designers. 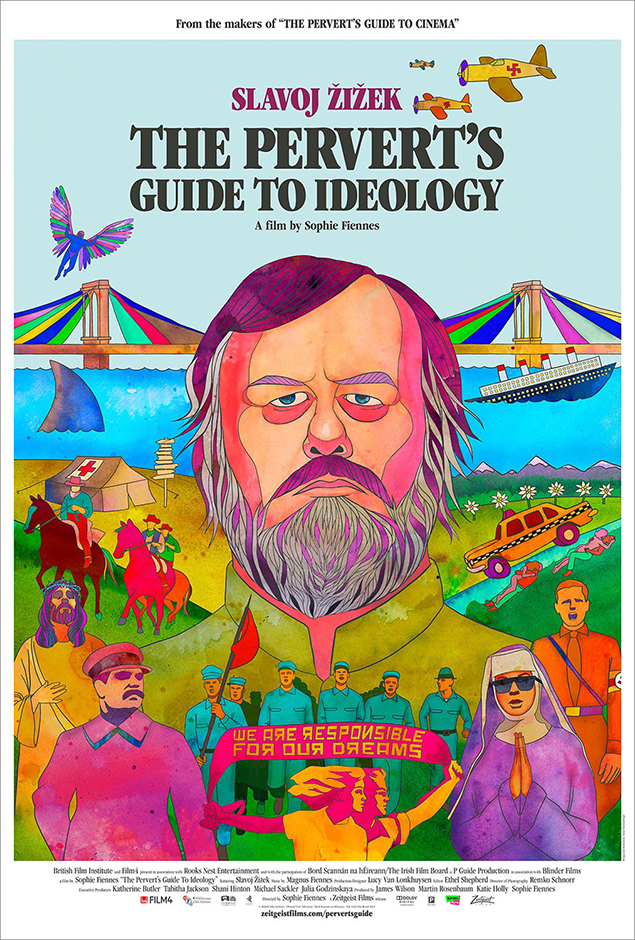 Stehrenberger followed Kiss Of The Damned with another hand-painted poster that’s so good, it dethrones her other contribution to this list. Here Stehrenberger explores the lighter side of her style, which, browsing through her portfolio, I can’t help but feel represents a large swath of her imaginative and creative core. The color choices are beautiful, the compositions playful and engaging, and the painterly, modern illustration style seems healthily influenced by the greats. Plus, the movie references! Stehrenberger plucks out the cinematic touchstones in Slavoj Zizek’s explorations and constructs with them an imaginary landscape of his philosophical world. 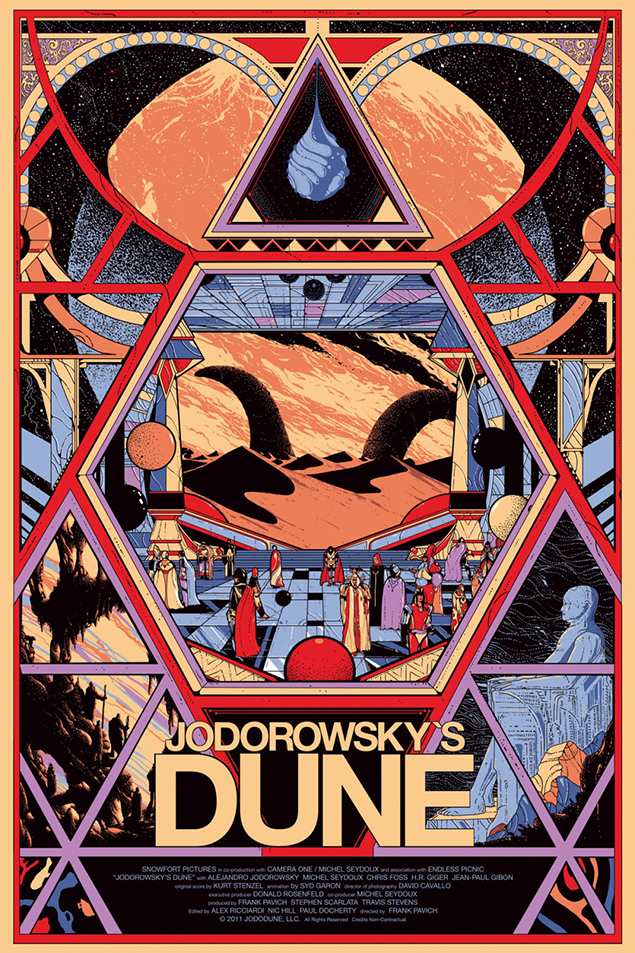 Stockholm’s Kilian Eng displays a great wealth in pensmanship and an incredible sense of composition. (There’s something almost Yokoo-esque, in fact, about the borders and geometry of this piece.) He must have had fun imagining this poster for a version of Dune never realized but conceived by cult auteur Alejandro Jodorowsky (El Topo). Jodorowsky, in planning his mythic adaptation of Frank Herbert’s science-fiction novel, had already roped in the talents of visionary artists Moebius and H.R. Giger during preproduction. Eng channels these heroes in this poster and, dare I say, proves worthy of comparison with a unique vision that makes him one of the most outstanding artists working today. (Related: Eng’s poster for the unmade, fictional Argo, rendered in a similar style) Mondo released this as a 24-by-36-inch screenprint to coincide with the release of the new documentary about the (almost) making of the film, and it’s a perfect example of the potential of great poster art in today’s marketplace.

I hope you enjoyed this piece and the Frames posts so far this year, and that you’ll share some of your favorite posters of the year below. See you in 2014.