An original poster finds the deeper shades of Blue Jasmine 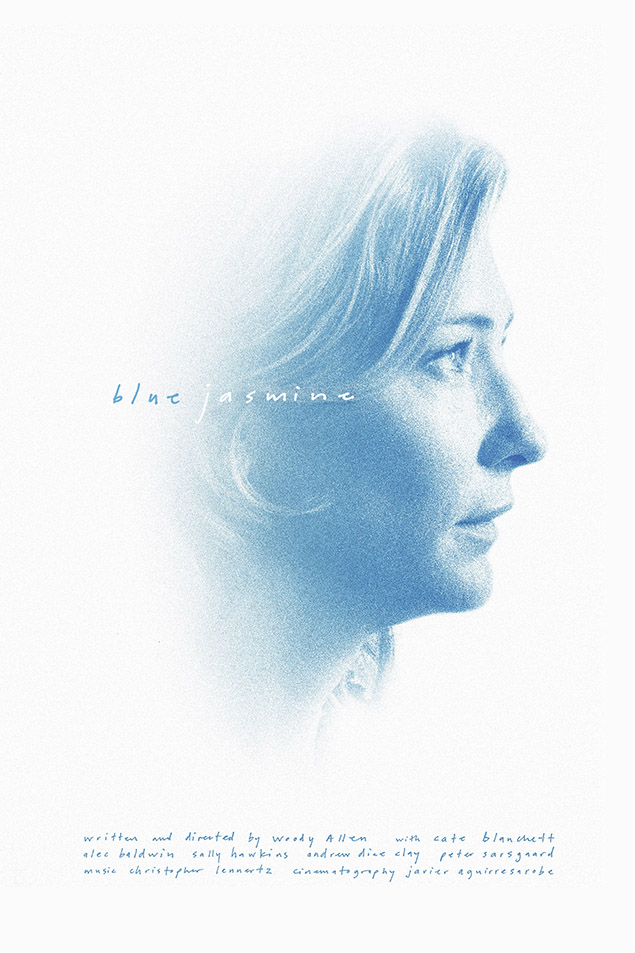 The official Blue Jasmine poster continues a recent tradition of subliminally rebranding the Woody Allen poster to match his recent run of more prestigious, quality films, which some critics argue stand among his very best. But despite its assumed commercial appeal, the poster left something to be desired for me after I saw the film. For this month’s Frames column, I wanted to see what sort of simple, interesting things I could do with just an image of Cate Blanchett’s face and the color blue. More importantly, I wanted to at least try to give the design the slightest psychological element, in honor of a performance by Blanchett that really makes Blue Jasmine a psychological tour de force.

In this case, that solution was simply to abstract the image. For me, abstraction is a go-to method for exploring issues of identity. (See last month’s column for more on this.) Jasmine is a beguiling character; the audience is constantly shifting its understanding of who she really is inside. So my portrait of Jasmine is fading away from one side to the next. There isn’t much more to it: I gave it a handwritten script that would complement her mental messiness, and I employed the profile angle on Blanchett as another way to study her character as an abstract icon.

My colleague Brandon Schaefer wrote this great piece on the aesthetics of Woody Allen’s posters, and the bulk of my column this month could be considered a kind of supplement to the ace reporting Brandon has already come up with. He admires the simple, black-and-white aesthetic consistency of Allen’s posters of the 1970s and 1980s, and then begins to make the point that in recent years, that signature poster style has struggled to hold its ground. The quality of these posters arguably followed the generally perceived dip in Allen’s filmography. The movies some of us have already forgotten about, like Anything Else and Cassandra’s Dream, had forgettable posters. Meanwhile, Match Point and Vicky Cristina Barcelona, two movies that teased critics and audiences with the idea of a a Woody Allen comeback, came with posters that were a fair bit lovelier. (The latter, especially—although it’s pretty easy to sell me on those three beautiful people.) 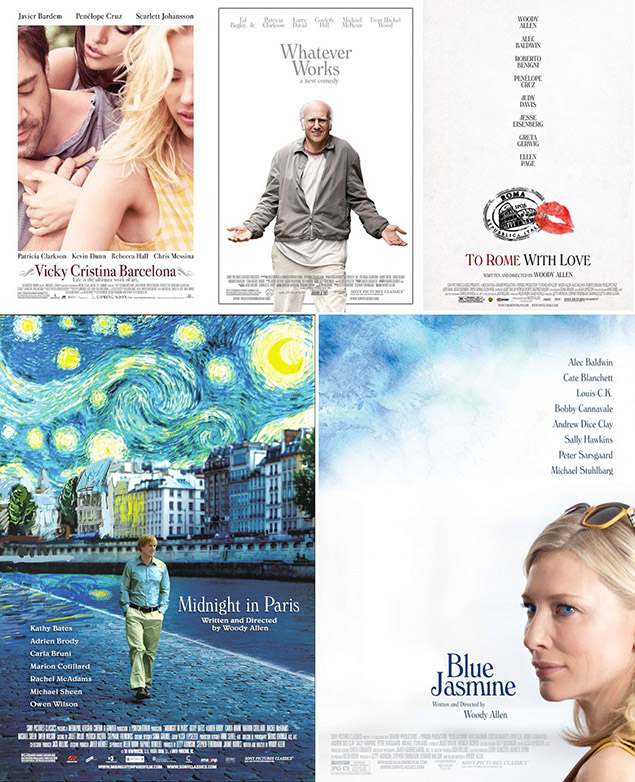 Since Vicky, it almost seems like there has been a concerted effort to restore that Woody Allen trademark to Woody Allen’s posters. Despite the laziness of the Whatever Works poster, its simplicity, not to mention that Windsor typeface (the font you see in the opening credits to any one of his films), at least lets audiences know they’re looking at a Woody Allen movie poster again. Speaking of Windsor, it seems to have stuck around on the posters; maybe it’s one of the ways Sony Pictures Classics and its designers have attempted to maintain this feeling of consistency. I’m no box-office expert, but I imagine that one of the few things you can count on these days is that a certain audience will go see a new Woody Allen picture. Even if these photo-based designs don’t hold a candle to Allen’s iconic posters from the 1970s, at least they’ve fallen into some kind of identifiable style.

All that said, the official Blue Jasmine poster in particular just didn’t do much for me. I like how it almost feels like a continuation of the Midnight In Paris poster—with its painterly elements and blue tones. And again, from a marketing standpoint, it’s smart to make these posters feel familiar: Paris was a big hit, and Jasmine has since become one. But after seeing Blue Jasmine, I looked back at the poster and was disappointed at how little it says about the film, other than who’s in it. The Paris poster at least tells you Owen Wilson is in Paris, which the title already suggests. The only thing the Jasmine poster adds to this press photo of Cate Blanchett is a splash of blue watercolor in the corner, and some oversaturated blue eyes. It tells you nothing about the film whatsoever, except that it stars Cate Blanchett, and—something about something blue.

Which leads me to the bratty part of my job: Trash-talking official movie posters, then making my own without anyone telling me what to do. Who cares about marketing concerns and studio opinions! Seriously, though: It’s easy to play the armchair critic to these posters, and I never intend to disparage the efforts of the designers who produced these ads—with no shortage of industry opinions and stipulations, I’m sure. The only purpose of this column is to see what happens when I remove all constraints and design whatever and however I want. It’s a fun experiment, but for better or worse, isn’t a realistic model in today’s movie-poster industry. My Blue Jasmine poster might not have gotten as many people in the seats. Or maybe it would have. Thankfully, I don’t have to stay up all night wondering about that, at least in my little utopia here at The Dissolve. But these are the fundamental philosophical conundrums of movie-poster design and marketing. Keith Phipps recently set forth into this realm of darkness, and it’s what I’ll be returning to in some form again and again in this column.

In addition to the above works-in-progress—other explorations I sought using that photo and the color blue—I’ll leave you readers with one other Woody Allen poster that inspired me during this process: The Purple Rose Of Cairo poster by the great Belgian artist Folon. It’s one of many beautiful international posters for Woody Allen’s films. Schaefer has selected some favorites as well, and I encourage you to share your favorites in the comments section below. 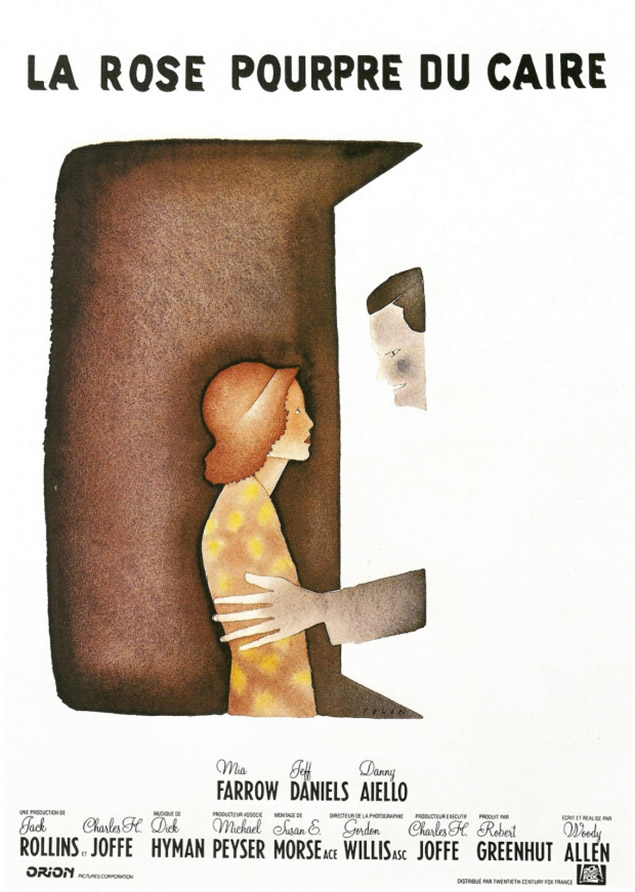