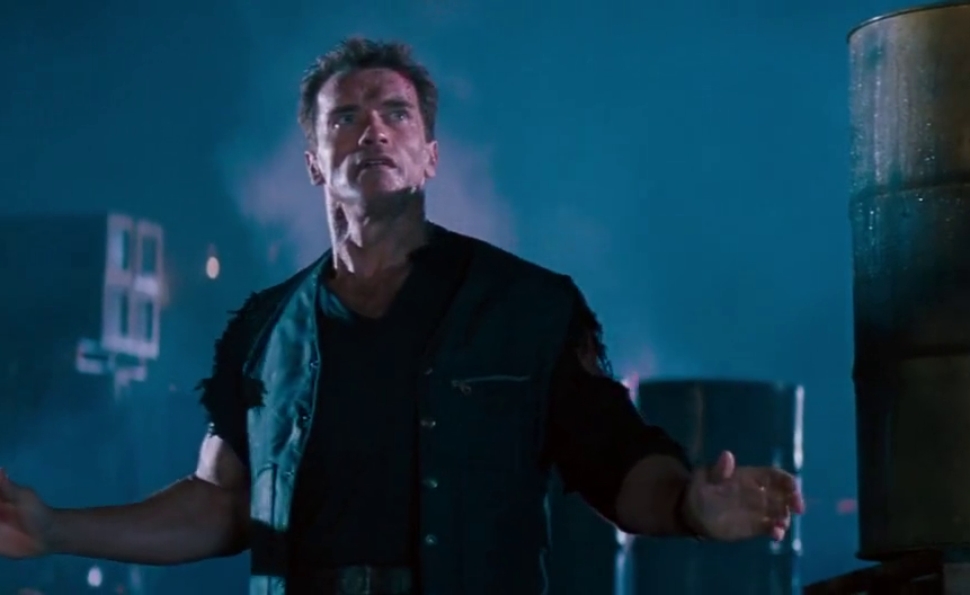 As a longtime film critic, I’ve noticed a strange contradiction. I became a critic because I love movies, yet I feel professionally obligated to take umbrage with movies that feel too much like movies. I get irritated when confronted with a plot I’ve seen countless times before, or characters that have devolved into stereotypes, or a twist that’s been around since before Al Jolson broke the sound barrier. Yet I don’t think I would have chosen film criticism as my profession if there wasn’t some part of me that also really loves it when movies act like movies. I have a distinct love-hate relationship with all the well-worn nonsense that films resort to in their mad attempt to escape the demon-beast Originality. This might seem contradictory, but loving movies, all movies, can require a fair amount of mental gymnastics as we try to figure out why some clichés fill us with unhinged joy while others angry up the blood, or why we find some movies offensively cheesy, and others transcendently cheesy.

I suppose much of the difference comes down to personal preference. If you’re going to see a movie that’s the purest possible reflection of an icon’s sensibility, and how they see themselves both within the context of pop culture and the world at large, it’s good if you like the actor in question. I think Schwarzenegger is one of the most entertaining figures in pop culture, dating back to the days of the underrated 1976 character study Stay Hungry, which paired the young bodybuilder with Jeff Bridges and Sally Field. It almost doesn’t matter who Schwarzenegger is playing, since he tends to play the same character over and over. He doesn’t need dialogue or material to be entertaining; his greatest role and most transcendent performance is probably in Pumping Iron, a 1977 documentary wherein he aces the role of Arnold Schwarzenegger, alpha-male bodybuilder of the Western world. The guy with the million-dollar smile and impossibly chiseled body in Pumping Iron is already a movie star; he just needed the credits to make it official.

Schwarzenegger managed to become a huge movie star without ever becoming a particularly good actor. Before assuming his destined position as the chief executive of California, Schwarzenegger starred in a string of pop classics: Conan The Barbarian, The Terminator, Commando, Predator, Twins, Kindergarten Cop, True Lies, and Total Recall. When Schwarzenegger dies, the title of one or more of those films will likely appear in the headlines. But if Schwarzenegger died and a headline read, “Arnold Schwarzenegger, Eraser star and former California governor, was 117 years old, beloved by all,” people would wonder why the headline writer had such an inexplicable hard-on for the movie Eraser.

Eraser has been more or less forgotten; even Schwarzenegger’s high-profile embarrassments, like Junior, Last Action Hero, and Batman & Robin, have a higher cultural profile. And Eraser was an enormous hit, grossing more than $240 million worldwide on a $100 million budget, and finishing 10th at the international box office for 1996, sandwiched between the likes of Jerry Maguire and The English Patient. For icons like Schwarzenegger, there are the movies everyone remembers, films that became part of the canon, and then there’s everything else. Despite its box-office success, Eraser unmistakably belongs in the “everything else” pile, alongside The 6th Day, End Of Days, Red Heat, and Collateral Damage, movies even Schwarzenegger himself probably can’t keep straight these days.

In Eraser, Schwarzenegger plays yet another preternaturally efficient law-enforcement officer: U.S. Marshal John Kruger, a writhing mass of righteous muscles who, as even his worst enemies concede, is the best at what he does. Kruger is defined by a complete lack of moral ambiguity: He never seems to experience a moment of indecision, or be tempted by any of the riches the world has to offer. He doesn’t even seem to experience sexual urges. Those would only slow him down and keep him from his all-important work saving the lives of desperate people in need.

Kruger isn’t just an unusually pure good guy; he’s practically ass-kicking Jesus, though even Jesus had his moment of doubt on the cross. Also, Jesus had those disciples helping him out; as Kruger sternly but compassionately asserts more than once, he always works alone. (So in some ways, Kruger is actually better than Jesus.)

Kruger’s specialty is faking the deaths of government witnesses to protect them, “erasing” their pasts to protect their futures. He creates untruths for the sake of the public good, and in return, the people he saves worship him like a god and help this solitary figure out whenever he’s in a bind. Kruger’s latest case involves protecting whistleblower Lee Cullen (Vanessa Williams), a high-level executive at weapons manufacturer Cyrez. Lee is concerned that her company is planning to sell a revolutionary new railgun, one that can see through walls, fire lasers, and do all kinds of wicked-cool shit to terrorists.

Early in the film, villainous James Cromwell hisses to Lee, “This isn’t the Red Cross! We make weapons! Things that kill people! If the government isn’t prepared to pay the price for them, it’s my job to find someone who will!” Shortly afterward, he puts a gun in his mouth and pulls the trigger. Cromwell is an Academy Award-nominated actor, but in his one scene, he’s called upon to be a flesh-and-blood comic-book character who speaks in hyperbole that wouldn’t be out of place in panels written by Stan Lee.

Eraser was Russell’s follow-up to the smash-hit comic-book adaptation The Mask and is, if anything, even more cartoonish and over-the-top. Eraser lacks pretty much all the qualities that define action movies of genuine quality, including, but not limited to, genuine quality. It isn’t spare and minimalist, like an early John Carpenter movie, or operatic and philosophical, like masterpieces by John Woo or Sam Peckinpah. Eraser never sets out to be anything other than a big, dumb movie, which helps explain why it succeeds. When you set the bar this low, it’s hard not to soar over it.

While on a plane, Kruger discovers that his mentor within the agency, U.S Marshal Robert DeGuerin (James Caan, picking up a paycheck and killing a whole bunch of people), is a mole intent on selling Cyrez’s super-weapon to terrorists. In the time-honored tradition of villains, DeGuerin drugs Kruger, then explains his entire evil plan to him, in hopes that Kruger will bring him and his evil minions to Lee, who is in hiding. Kruger then opens the emergency exit, hurtles a seat into the engine, causing it to blow up, then tosses an emergency parachute out in front of him and exits the plane.

For anyone else, falling out of an airplane without a parachute would represent an instant death sentence. For John Kruger, however, it merely puts him at a slight disadvantage. It speaks to the wonderful excess of Eraser that the filmmakers saw a U.S. marshall falling out of a crashing plane without a parachute as the mere beginning of a setpiece.

Kruger miraculously retrieves the emergency parachute while hurtling through the air at breakneck speed, and DeGuerin orders the pilot to chase after him in the crashing plane. In an astonishing act of concentration and focus, Kruger manages to pull out a gun and successfully fire it into the cockpit of the airplane crashing toward him, preventing it from hitting him as he soars through the air like some sort of man-god. Eventually Kruger comes to earth, landing on a car at a junkyard, no worse for wear. For Kruger, falling out an airplane, retrieving a parachute while hurtling toward the ground, and shooting out the cockpit of an airplane trying to murder him is more or less a typical day at the office. Nothing to go home and blog about.

Eraser lives and dies by its setpieces, and it isn’t long until Kruger, having shaken off that unfortunate business on the airplane, gets into a shoot-out with the bad guys at the zoo he earlier designated as a meeting place with Lee. The sequence exists, preposterously but gloriously, just for the moment where Schwarzenegger shoots a hilariously fake CGI alligator—these were the dark days of CGI, when the most anybody aspired to was a Clutch Cargo level of realism—then quips, “You’re luggage.”

What’s great about this scene, beyond the fact that Arnold Schwarzenegger shoots a hilariously fake CGI alligator and then quips, “You’re luggage,” is that Kruger eschews the more obvious zinger: “See you later, alligator!” Also, Kruger’s humor is lost on the alligator, which is dead and all, though it’s possible that its spirit floated above its body for a moment, conceding, “That was a pretty good zinger.” In this moment, the always-slippery line separating Schwarzenegger from popular parodies like The Simpsons’ Rainier Wolfcastle, star of the McBain films, disappears completely.

Eraser might as well be a McBain movie, though McBain has better one-liners than the Eraser screenwriters give Schwarzenegger. Instead, Eraser leaves the funny business to the late Robert Pastorelli, who is graced here with an “and” credit, which generally signals that the name attached to it is a notable character and/or played by a notable actor. Pastorelli, then co-starring on Murphy Brown, is set up as the fan favorite who steals the show from the writhing mass of muscles at its center. In other words, Eraser wants Pastorelli’s comic mobster-in-hiding to be Eraser’s equivalent of Tom Arnold in True Lies, a film that transformed the public’s opinion of Arnold from universal contempt to a certain grudging admiration. In True Lies and Eraser, Arnold and Pastorelli fill similar roles; they’re the audience surrogate, the guy next door with the sharp sense of humor who helps the impossibly powerful, perfect hero save humanity.

As my colleague Matt Singer pointed out to me, Eraser, a film about a man who makes inconvenient truths disappear for the greater good, was made roughly around the time Schwarzenegger began an affair with his housekeeper, which produced a secret son and later destroyed his marriage and damaged his political reputation. In real life, Schwarzenegger is clearly a man of secrets, of powerful passions. But in Eraser, Kruger’s dialogue never expresses anything about him as a man; it’s just a means of conveying the information necessary to move the plot from one point to the next. Schwarzenegger has chosen three professions—world-class body-builder, movie star, and politician—where he’s constantly on display. He understandably prefers the fantasy of himself as a selfless servant of the public good over the complicated, incriminating truth.

Eraser, while patently ridiculous, appeals directly to the lizard part of audiences’ brains that wants to see Arnold Schwarzenegger fire giant super-guns and murder dangerous reptiles in a lighthearted, quip-intensive fashion. Eraser clumsily but thoroughly pleasured that portion of my brain, and if it’s unlikely I will remember much about the movie beyond the airplane scene, “You’re luggage,” and the underwhelming comedy stylings of the painter from Murphy Brown, that’s because a big, dumb Arnold Schwarzenegger popcorn movie called Eraser is custom-designed to be forgotten.