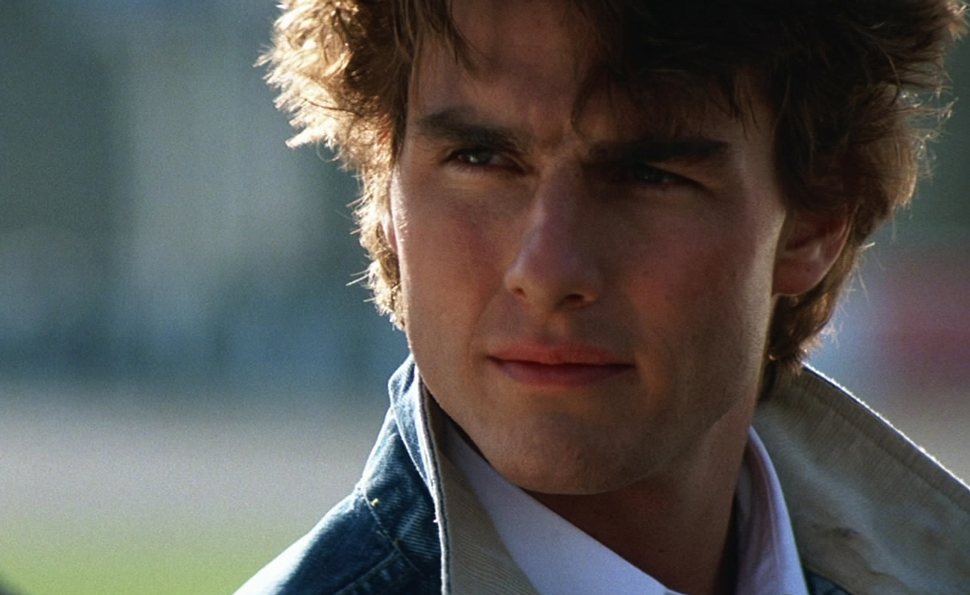 Though Days Of Thunder was released in summer 1990, today, it feels like the 1980s’ last gasp. And when I say the 1980s, I mean the 1980s of Wall Street, Ronald Reagan, big hair, tacky clothes, cocaine, naked money-lust, and Patrick Bateman. It was also, not coincidentally, the decade that made Tom Cruise the biggest movie star in the world, and the decade Days Of Thunder co-producer Don Simpson personified so strongly with his greed, narcissism, and bottomless appetites that he barely survived it. In 1996, Simpson died of the drug overdose everyone saw coming.

Watching Days Of Thunder gave me a renewed appreciation of the genius of Christian Bale’s performance as a Huey Lewis And The News-loving serial killer in American Psycho, a performance rooted in Cruise’s onscreen persona. To borrow a line from previous Forgotbusters entry, Secret Of My Success, American Psycho’s Patrick Bateman is Cole Trickle, Cruise’s hotshot race-car driver, intensified. The film’s hyper-masculine kitsch begins with the protagonist’s name and doesn’t end until a closing theme song from Whitesnake frontman David Coverdale, which Cruise, ever the hip, happening dude, personally sought out:

In Days Of Thunder, Trickle insults his eventual mentor, behaves as if the rules of society do not apply to him, and drives recklessly enough to endanger countless lives. This includes eventual love interest Dr. Claire Lewicki (Nicole Kidman), who begs him to stop when he’s driving like a lunatic with her in his car. Of course he ignores her. The hotheaded, arrogant, dangerously aggressive Trickle seems to be just a few professional frustrations away from cackling maniacally while chasing victims with a chainsaw.

Like many of Cruise’s hits up until that time, Days Of Thunder is supposed to be the story of a bad boy redeemed. Instead, it’s the story of a raging asshole who, through time, experience, and a series of humbling personal and professional setbacks, learns to be slightly less of an asshole. Not even Cruise’s charm can redeem the character, in part because his performance is so thoroughly charmless. Days Of Thunder could not be more commercial, yet it still makes the mistake of asking audiences to root for, and identify with, a protagonist who behaves more than a little like Simpson, whose runaway egomania extended to giving himself a role in the film as a racer based on Mario Andretti. (Simpson wasn’t even an actor. His part was cut to a brief cameo in editing.)

Onscreen and off, Days Of Thunder is defined by hubris. The famously troubled production was the Heaven’s Gate of repulsively commercial action movies, a fiasco whose budget and production schedule both doubled as Simpson, producing partner Jerry Bruckheimer, screenwriter Robert Towne (yes, that Robert Towne), and director Tony Scott—who’d previously worked with Simpson, Bruckheimer, and Cruise on Top Gun—squabbled over just about everything. When the studio tried to intervene, this chorus of big swinging dicks told the studio that the agreed-upon production schedule meant nothing to them, and they would take as long as they wanted, spend as much money as they wanted, and do whatever the fuck they wanted, and if the studio flacks didn’t like it, they could go fuck themselves.

Days Of Thunder’s script wasn’t complete when shooting started, and Towne reportedly wrote and re-wrote many scenes on the day of filming, which helps explain why a script by a man widely considered one of the greatest screenwriters of all time is filled with rookie mistakes. It’s chockablock with moments where characters tell other characters things they both obviously know, solely for the benefit of an unseen audience. Also, it’s utter garbage. The characterization is paper-thin, the plot maddeningly familiar, and the dialogue cheesy and over the top. Cruise is credited alongside Towne with devising the story of Days Of Thunder, which is, tellingly, the only writing credit in his lengthy, often distinguished career—though all he really needed to do was tell Towne to take the scripts of his previous films, swap out the names and professions, and add lots of cars and Mello Yello product placement.

The makers of Days Of Thunder were operating from a position of power. They were convinced, not without reason, that they had a surefire blockbuster on their hands—Top Gun on wheels—a movie whose runaway success would excuse and forgive even the most egregious indulgences. Their moral and creative sins would all be washed away by its massive box-office. It’s a testament to how popular Cruise was at the time that he made a laughably awful movie plagued by bad buzz, but he still ended up with the 13th highest-grossing film of 1990, pulling in more than $150 million worldwide.

Thirteenth isn’t bad at all, but for the swaggering alpha males of Days Of Thunder—most of them behind the scenes—second place represented dishonorable failure; 13th was something more like oblivion. It didn’t help that the film’s box-office receipts trailed behind titles like Kindergarten Cop and Teenage Mutant Ninja Turtles—a low-budget movie whose biggest star was the voice of Corey Feldman.

Days Of Thunder is the quintessential representation of what Roger Ebert, in his positive review of the film, called the “Tom Cruise Picture,” a subgenre defined by nine characteristics that can also be found in the previous smashes Top Gun, Cocktail, and The Color Of Money. They include:

1. The Cruise character, invariably a young and naive but naturally talented kid who could be the best, if ever he could tame his rambunctious spirit.

3. The Superior Woman, usually older, taller, and more mature than the Cruise character, who functions as a Mentor for his spirit, while the male Mentor supervises his craft.

8. The Proto-Enemy, the bad guy in the opening reels of the movie, who provides the hero with an opponent to practice on. At first the Cruise character and the Proto-Enemy dislike each other, but eventually through a baptism of fire they learn to love one another.

Sure enough, Cole Trickle is a young and naïve but naturally talented kid who could be the best, if only he could tame his rambunctious spirit. And true to form, Trickle receives an outrageously over-the-top introduction: For the first five minutes or so of the film, all the characters talk about this brash new driver. Then Cruise emerges in a cloud of smoke, wearing shades, and swerving dangerously on a motorcycle. The only way this introduction could be more screamingly hyperbolic would be if he was also carrying a lion on his shoulders and shooting lasers out of his eyes.

Trickle has never driven a stock car before, but as soon as he gets inside one, he instantly transforms into the greatest stock-car driver in existence. He’s that good. Cruise’s characters almost always are. They aren’t just exceptional, they’re damn near superhuman. Trickle finds a mentor in car-builder, crew chief, and avuncular father figure Harry Hogge (Robert Duvall), a legend in the field who’s impressed by Trickle’s skills, but put off by his arrogant disrespect for both his elders and propriety.

Trickle continues to treat Hogge brashly until Hogge delivers some arcane automotive jargon. Then Trickle breaks down and concedes that he just doesn’t understand cars. “I’m an idiot. I don’t have the vocabulary,” are his exact words. It’s a rare, humanizing moment in part because Cruise wrestled with dyslexia as a young man, and couldn’t understand words and ideas the way his peers could, a hindrance that fed his intense ambition. In this moment, we’re provided a rare, poignant glimpse into the man behind the actor, the short, dyslexic seminary-school dropout who feels an intense need to dominate film the same way Trickle does stock-car racing.

Cruise is only ever effective in the scattered moments when his vulnerability emerges, like when he’s getting a CAT scan in the hospital and, with an un-Tom Cruise-like quiver in his voice, desperately asks for someone to talk to him, to make the experience a little less terrifying. Those moments are few and far between, though, as most of the film is devoted to massaging Cruise’s ego, and other things as well. In the most embarrassing moment in a film full of them, Hogge razzes Trickle after a big victory by hiring an attractive woman to pretend to be a police officer busting him for illegal moonshine consumption. The inebriated Trickle is briefly fooled, until the “cop” shoves her hand into his jeans and lovingly rubs his crotch, in the process revealing herself as the evening’s professional entertainment.

It’s a spectacularly dumb scene that feels out of place and pointless, yet pays off in the most awful, humiliating, juvenile fashion. Shortly after ending up on the receiving end of a sexy-policewoman prank, Trickle has a terrible, career-threatening crash. Upon seeing that his neurologist is Claire Lewicki, a gorgeous woman who appears to be in her early 20s (like all great neurologists), he assumes she’s a sex worker as well, and guides her hand to his crotch while making leering comments. (Trickle apparently assumes that all women in positions of power are actually sex workers of some sort. Were he witness to Hillary Clinton’s political assent, I fear he’d show up at her rallies angrily demanding a lapdance.)

The glowering, gorgeous Lewicki is initially unamused by Trickle’s assumption and leering innuendo, but Trickle is no ordinary man. He pursues Lewicki with the same go-for-broke recklessness he brings to driving, and before long, she’s throwing him against a wall to initiate sex, when he isn’t demonstrating racing technique on her leg using packets of artificial sweeteners.

In keeping with Ebert’s description of the Superior Woman, Lewicki sees right through Trickle’s boorish bravado. She knows Trickle, not unlike Cruise himself, is motivated by fear of failure as much as a ferocious will for greatness. But there’s no real vulnerability or modesty to the film’s acknowledgement that its world-conquering hero is motivated by fear; it only makes his victories more stunning and meaningful. To borrow the parlance of pop psychology and Successories posters, true courage lies not in being fearless, but in overcoming fear. Days Of Thunder has Trickle conquer his fears while still remaining a prickly asshole.

In theory, NASCAR should be perfect for movies: It’s all about power, speed, and exceptional people testing their will in a deadly and dramatic arena. In actuality, NASCAR plays like a disorienting, incoherent blur of mindless action cut to ribbons by the hyper-manic Scott. It’s telling that the only memorable race in Days Of Thunder occurs not on a racetrack, but in a hospital where Trickle and rival-turned-ally Rowdy Burns (Michael Rooker) race each other while confined to wheelchairs. There’s little in the film to refute Lewicki’s assertion that stock-car racing is just a bunch of rednecks racing around in circles—though the film did help popularize NASCAR, by ubiquity if nothing else. And oh sweet Lord, was Days Of Thunder everywhere in 1990. Its profile was wildly disproportionate to both its box-office take and its negligible creative worth.

Cole Trickle eventually wins the big race. Could the film end any other way? Nope, Days Of Thunder has to end with triumph over adversity, with an unlikable jerk winning an uninteresting event. It’s pretty much the definition of an empty victory, not unlike Days Of Thunder itself, which made a lot of money, but still reeked of failure and bad self-parody. It’s less a film than a gift to Cruise’s enormous ego, characterized by a take on masculinity that constantly veers into grotesquerie. With Days Of Thunder, Simpson, Bruckheimer, Towne, and Scott set out to make the ultimate testosterone-fueled Tom Cruise movie. To their eternal detriment, and to the detriment of society as a whole, they succeeded.