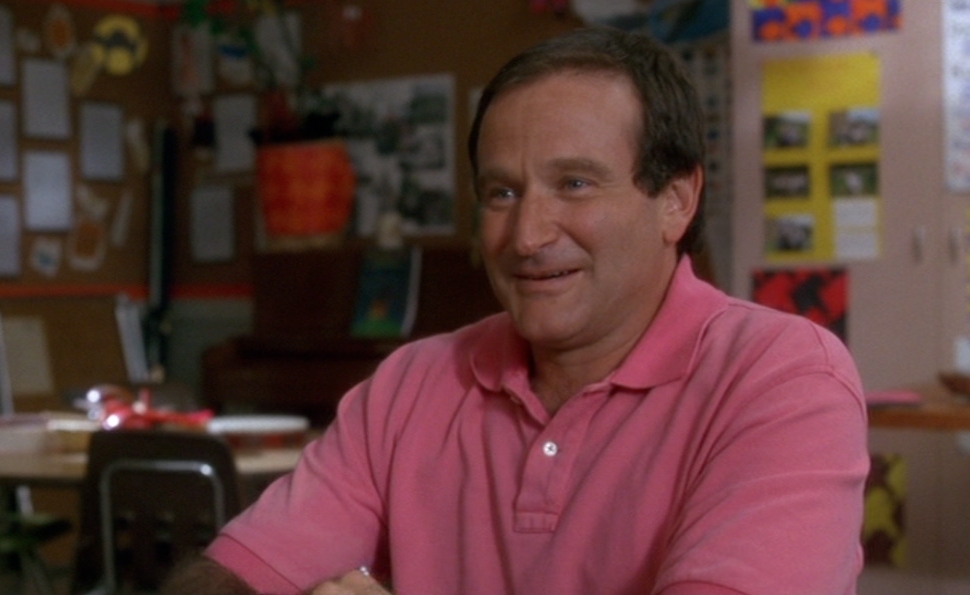 Robin Williams is, by all accounts, a lovely human being. He’s an accomplished, Academy Award-winning dramatic actor and an international comedy superstar who for decades now has been beloved by millions. Yet for some, Williams inspires a level of contempt and vitriol better suited to genocidal dictators and child-rapists than hirsute funnymen. Detractors don’t just dislike Williams, they despise him. I suspect that’s because there are few qualities more off-putting than publicly broadcasting your need for validation. Williams has always been among our most shamelessly needy entertainers.

Loud, profuse laughter has never been enough for Williams. He wants to go beyond amusing people, to touch their souls, uplift their spirits, and teach them a few lessons about this crazy whirlwind called life. It’s this brazen, seemingly unexamined sentimentality—an intense need to represent all that is pure and wondrous about the world—that makes Williams so insufferable at his cloying worst.

Though his characters have had different names and identities, Williams has played the manifestation of childhood magic and wonder repeatedly: as a professional toymaker in Barry Levinson’s wildly overreaching comic fantasy Toys. As a slightly more adult version of a similar character in Patch Adams, putting on a clown nose to distract small children from thinking about their impending deaths. Most disastrously, the 1996 drama Jack puts metaphorical clown noses on all the other characters, desperately attempting to distract audiences from obsessing about the impending death of the giant child Williams plays.

For people who despise Williams’ penchant for sentimentality, Jack is the heart of darkness, a movie that embodies everything sappy and pandering about his persona, but in unusually pure, obnoxious form. Even in a career that includes both Patch Adams and a suspiciously The Day The Clown Cried-style inspirational Holocaust drama drama called Jakob The Liar, Jack looms ominously as the ultimate Robin Williams sap-fest.

Williams has long specialized in playing twinkly-eyed manchildren, but Jack casts him as a literal manchild, a boy named Jack born with a rare disease that causes him to grow four times faster than normal. The doctor who diagnoses Jack’s condition assures the baby’s parents, Karen (Diane Lane) and Brian (Brian Kerwin) that despite this abnormality, Jack is not in pain, and is otherwise normal and healthy, though it does mean he’ll die young. Despite the doctor’s soothing words, there’s no quite getting around the tragic core of Jack: A Giant Child Who Is Going To Die Young. So the film goes out of its way to distract viewers with juvenile nonsense in order to keep them from focusing on the protagonist’s looming death.

Hopscotch forward 10 years: Jack has now adopted the hairy, motor-mouthed form of Robin Williams, and wants nothing more than to run, play, and have fun with other children his age at public school, instead of being tutored by Lawrence Woodruff (a blissfully restrained, avuncular Bill Cosby) and spending all his free time frolicking with his loving but overprotective mother. Jack condescendingly treats its protagonist like E.T. or Pinocchio, a magical outsider whose poignant desire to be human is supposed to speak eloquently about our own humanity. 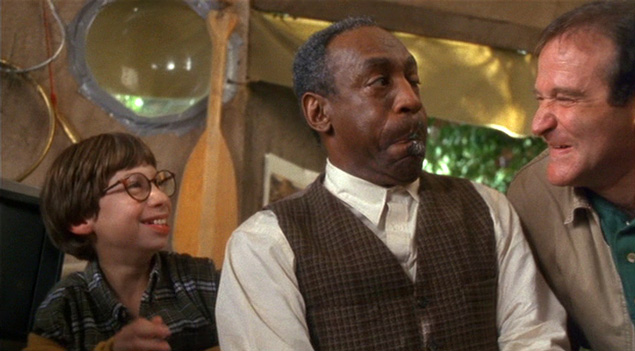 At this point, I should probably mention that Francis Ford Coppola, the director of The Godfather and Apocalypse Now, also directed Jack. Coppola seems to have directed the child actors in Jack to go so unbelievably broad and over-the-top that Williams can’t help but seem like the most convincing, believable child in any given scene by default. The only way the pint-sized hams here could be more ostentatious would be if they rapped all their lines while breakdancing. Jack doesn’t surround its outsized protagonist with other children so much as it surrounds him with the hammiest, most embarrassing kind of child actor, the kind other child actors shun for being gratingly precocious. These abysmal performers make the film feel not like a Coppola movie, so much as a direct-to-video sequel to The Sandlot—call it The Sandlot 5: The Legend Of The Really Big, Weird Kid—that inexplicably attracted Coppola and Williams’ attention.

Despite all this, the prospect of Robin Williams in full-on manchild-sprite-pixie mode was enough to make Jack a commercial success: It was the 25th highest-grossing film of 1996—just meeting the criteria for a Forgotbuster—pulling in close to $60 million domestically, despite overwhelmingly negative reviews. And, oh yes, a premise involving a giant child who is going to die young.

But before the giant child dies young, he first gets to go to regular school, where he falls out of his tiny desk. (Because it is small and he is big!) At first, he’s ridiculed for being different and big and weird, but Jack’s classmates eventually discover that there are upsides to being friends with a 10-year-old with the body of a 40-year-old. They dispatch him to procure what my generation knew as “girly mags,” a “gag” that typifies Jack’s almost perverse wholesomeness. The film inhabits an Eisenhower-era, Leave It To Beaver America of white picket fences, stickball games, and giant treehouses, where the most mischief a kid can get into is farting into a can, or checking out copies of Penthouse with his bestest pals.

Coppola was once the most ambitious, charismatic filmmaker alive, but with Jack, he didn’t make a family film so much as a film destined to insult the intelligence of anyone old enough to read. Jack is shameless enough to have its protagonist gaze with wide-eyed wonder at a caterpillar, then at a cocoon, and then at a butterfly emerging magically out of its chrysalis, in order to represent his understanding of life’s cycles and the beauty and wonder of personal development and transformation. Then it returns to the image of a butterfly, with a brazenness that would make Anne Geddes vomit glitter rainbows in disgust.

The film’s full-bodied, wholehearted embrace of the maudlin, kitschy, and innocent makes it even more glaringly incongruous when sex, and all the confusion it engenders, arrives in the wiggling, giggling, cleavage-baring, nasal form of Dolores “D.D.” Durante (Fran Drescher), the sexually voracious mother of Jack’s greaser buddy Louie (Adam Zolotin). Louie has Jack impersonate their principal for his mother’s benefit, and D.D., being a trusting, oblivious soul, doesn’t seem too concerned that the principal of her son’s school is either a 10-year-old with an aging disease, an idiot-savant who keeps his savant side carefully hidden, or deeply mentally challenged.

All D.D. knows is that she wants this bizarre, seemingly mentally challenged manchild, so she slips him her number. This jarring development replaces the insistent internal throb of that giant child is going to die young with Oh my God, is that giant child going to have sex with Fran Drescher before dying young?

D.D. then disappears from the movie, and the threat seems to pass, until later, when Jack gets sad and ends up in a bar, where he befriends a downcast, toupee-wearing man named Paul, played by Michael McKean. Paul talks about a failed recent sexual attempt where he went “limp” while in his “birthday suit,” and Jack, having the innocent ears and eyes and solid-gold heart of a child, or perhaps the literal-minded robot on Small Wonder, thinks his new friend hurt his leg on his birthday. At this boozy haven for lost, drunken souls, Jack sees D.D. and works up the moxie to grope her ass, but before he can seal the deal, he bumps into a barroom bully, who taunts him with, “What do you think, you’re pretty smart?” When Jack answers affirmatively, except for social studies, the thug responds with, “Studies? How’d you like to study my fist?” (Again, this is an exchange that occurred in a film by the director of The Conversation.)

Jack alternates deliriously and incoherently between G-rated family-friendly shenanigans and hilariously mawkish melodrama. One moment, Jack is bonding with his bros in a giant treehouse by farting into a can and eating totally gross stuff; the next, he’s contemplating his mortality when he answers the question, “What do I want to be when I grow up?” with a trembling, “I want to be alive.”

On a thematic level, Jack is about profound issues: childhood, aging, perspective, and the value and meaning of life. But from a plot standpoint, it’s almost perversely mundane. The film is primarily concerned with Jack’s efforts to go to a public school, and then his efforts to get sent back to the public school after his parents decide it’d be safer and more secure to have him home-tutored. The film’s climax consists of Jack’s obnoxious friends begging his mom to let him come out and join them in their youthful frolics, both through words and by having a veritable carnival of fun just outside his front door. Jack is threadbare and deficient in terms of plot and characterization, yet as it creaks into the home stretch, it lurches for a sense of purpose, and struggles to supply uplift it hasn’t come close to earning.

After establishing its protagonist as an exemplar of all that is good and pure about the human spirit, the film flashes forward seven years to Jack’s high-school graduation. In a vomit-inducing fit of sentimentality, a now-wizened Jack—backlit by the requisite halo of golden light and scored to soaring strings—serves up the film’s cloying message on a platter, announcing, “In the end, none of us have very long on this Earth. Life is fleeting. And if you’re ever distressed, cast your eyes to the summer sky when the stars are strung across the velvety night, and when a shooting star shoots through the blackness turning night into day, make a wish. Think of me. Make your life spectacular. I know I did. I made it, Mom. I’m a grown-up.”

In this moment, the film shamelessly ejaculates thick streams of undiluted sap in a 25-person gang-bang of grotesque melodrama. Jack drills into audiences the magic of life, the wonder of childhood, and the beauty of friendship, while making a terrible case for all three. It embodies the treacle at the core of Williams’ persona, but for Coppola, it was undeniably a low. The director quit filmmaking for a good decade following the next year’s The Rainmaker, but his perplexingly generic work here strongly suggests that he quit trying shortly before the script for Jack first reached his desk.