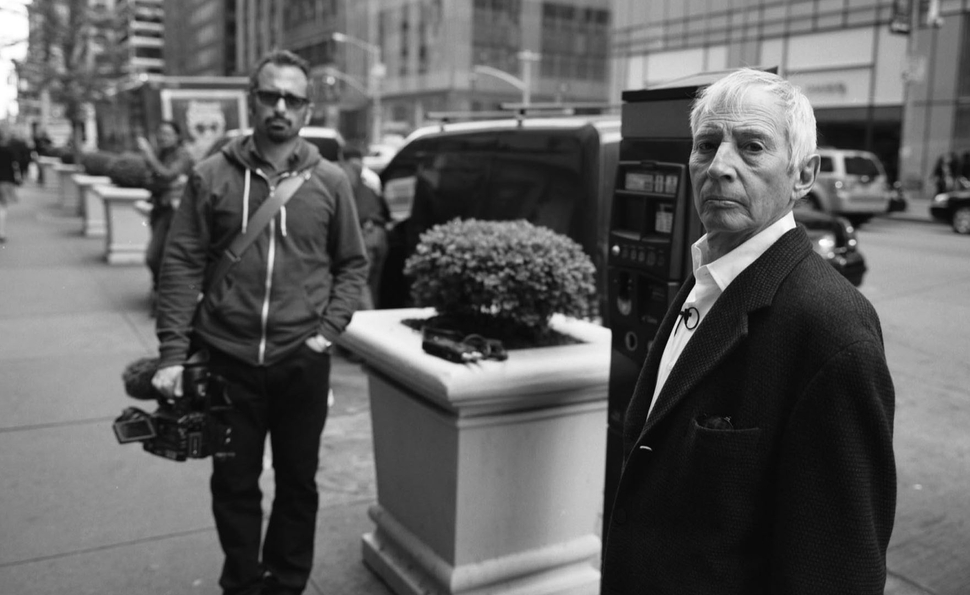 Like so many other people, I’ve been riveted by The Jinx: The Life And Deaths Of Robert Durst, Andrew Jarecki’s HBO documentary miniseries on the life and crimes of eccentric Manhattan real-estate scion Robert Durst. The much-buzzed-about miniseries just wrapped its six-episode run in the most melodramatic way imaginable. The show ended with what appeared to be a damning taped confession from subject Robert Durst, who thought his microphone was off. The finale aired the day after news broke that, after dramatically eluding justice for decades, Durst had been arrested on charges related to a 2000 murder in Los Angeles. That’s good television.

There are countless curious complications to this story. One is that Jarecki told Durst’s story before, in the 2010 narrative film All Good Things. This thinly veiled biopic attracted Durst to Jarecki, and inspired him to seek out a project where he could finally reveal his truth to the public. Durst was charged with multiple murders, and the evidence seems to suggest he committed them. After being found not guilty, why would he eagerly invite public scrutiny?

It’s a testament to how little of an impact All Good Things made, and how thoroughly confused it is, that its subject felt it was so far from the truth that it needed to be corrected, even if that correction might send him to jail. Nothing antagonizes a narcissist like being ignored. I suspect some part of Durst’s fractured mind prefers the negative treatment The Jinx provoked over the non-response All Good Things received. Better to be a killer than a nobody.

Durst’s call to Jarecki was unusual in that All Good Things overtly asserts Durst was almost assuredly responsible for the death of three people, dismembering one of them. That would make Jarecki an unlikely ally, to say the least, but it’s a testament to the way Durst sees the world that he still viewed a man who made a movie depicting him as a killer as his best shot at getting voice and story out into the cultural conversation.

Though All Good Things presents Durst as a mentally ill killer, it’s also far more sympathetic than The Jinx. In the one-on-one contemporary interviews that are The Jinx’s most fascinating elements, Durst comes off as a rat-eyed sociopath incapable of understanding the moral repercussions of his actions, let alone atoning for his sins. But David Marks, the version of Durst played by Ryan Gosling in All Good Things, is just a lost man. Gosling plays him as a loner scarred by watching his mother plummet off a rooftop, back when David was 7. Through a combination of mental illness and the never-ending ricochet of childhood drama, he finds living as a respectable human being impossible. For David, hell is other people and social gatherings are the ninth circle of hell, so he tries to extricate himself from them as much as a man of his breeding can. 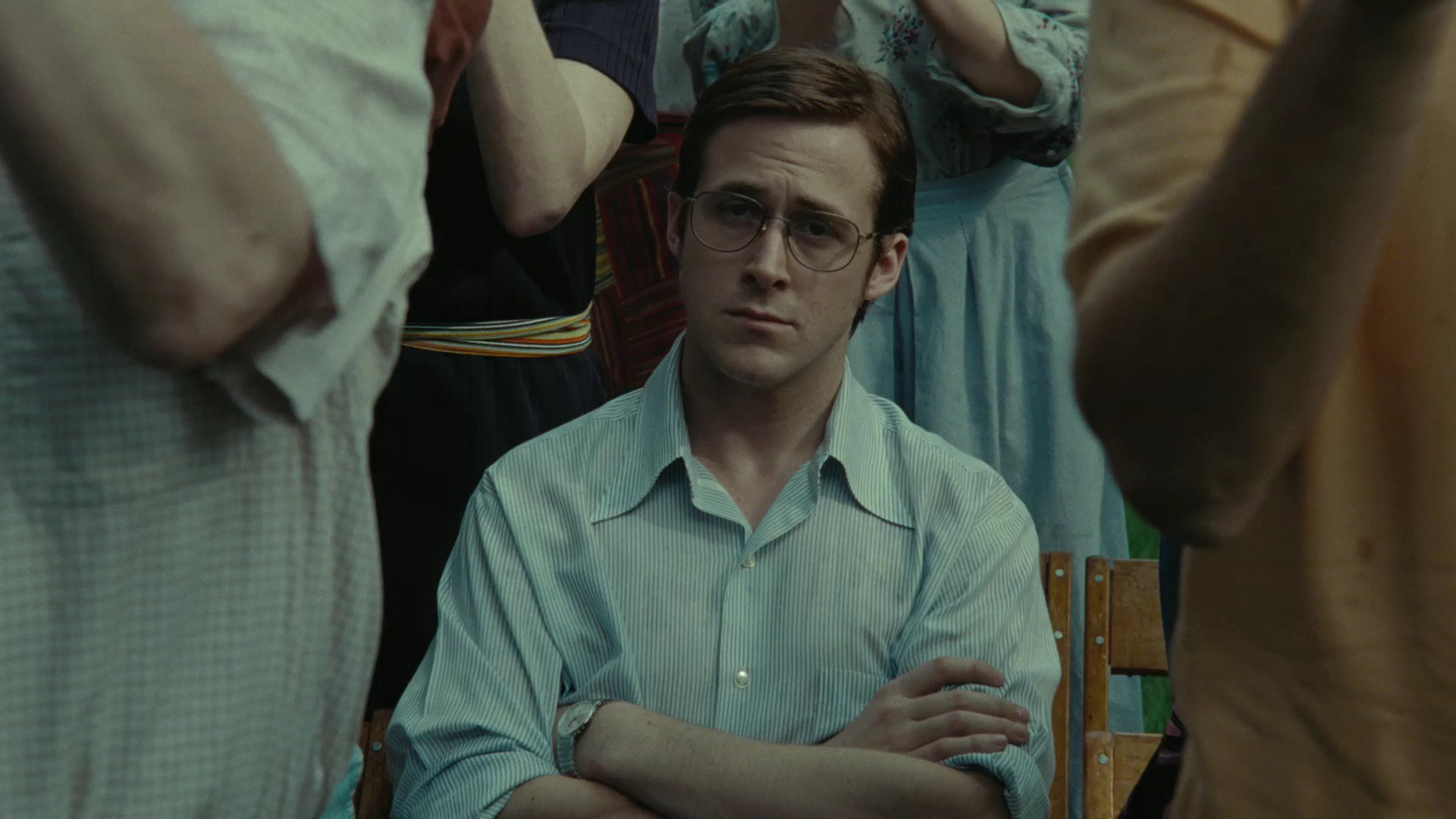 David is expected to take over the family’s thriving Manhattan real-estate business, but he would rather operate a Vermont health-food store with Katie Marks (Kirsten Dunst), his effervescent medical-student wife. This stirs the objections of David’s terrifying father Sanford (Frank Langella), who sees Durst as a weak disgrace. Durst’s real father, Seymour, looms as a larger-than-life but spectral presence in The Jinx. He’s the big, disapproving macher his son can never live up to, but making him a central character, even when played by an actor of Langella’s presence, ends up reducing All Good Things to cheap psychology. The film becomes a self-consciously arty exploration of the Oedipal angst of a man-child who trembles under his horrifying patriarch’s demands because he has precious little will of his own. This degrades the powerful mystery at the film’s core, which is less, “Did he kill these people?” and more “Why and how did he kill these people?” Although The Jinx is billed as a documentary, it maintains an air of mystery throughout, even when the facts have been damn near set in stone. All Good Things is hamstrung by the narrative need to explain everything, to reduce great evil to a checklist of traumas endured en route to making a scared little boy a conscienceless sociopath.

All Good Things depicts the Vermont health-food store as an idyll in its protagonist’s otherwise miserable life, an era when he finally got out from under his father’s thumb and embraced the healthy, spiritually fulfilling life of a small-town merchant. In other words, it’s his Rosebud, his Garden of Eden, the apex from which he experienced a swift, decisive fall once his dad demanded he snap to attention, sell the store, and accept his miserable destiny as a family bagman. But The Jinx makes it seem like Durst started a health-food store because he thought that’s what people wanted him to do. He seems to derive little pleasure from anything. In The Jinx, he isn’t the eternally stepped-upon dreamer of All Good Things so much as a man devoid of remorse or regret for his actions, a sociopath who, in talking about his marriage going south after he forced his wife to get an abortion, sounds as offhanded as someone saying they opted out of being their condo-board treasurer because it got to be a hassle.

All Good Things offers many shots of David at work in the 1970s, stealing puffs from joints while he goes about the grubby business of picking up money from his family’s sleaziest and most disreputable properties. These don’t add much to viewers’ understanding of the character, beyond establishing that he hates what his family makes him do. All it takes is five minutes with the rat-eyed, affectless Durst in The Jinx to convey the same thing far more powerfully. This is a man out of step with society, not because he’s the conversationally challenged misfit of All Good Things, but because he views humanity as beneath his contempt, and clearly doesn’t consider other people worth his time or energy.

The Robert Durst of The Jinx is a pitiable creature, a fragile aggregation of mental illnesses and white-male privilege so profound, it becomes a form of pathology. Yet he also comes off as the embodiment of the banality of evil, a man who sucks the air out of every room, and does not understand why he is supposed to be sad about the deaths he caused. They got in his way. They were disposed of. Isn’t that what happens to insignificant people who get in the way of the rich and powerful? Durst’s arrogance borders on insanity. He’s so sure of himself that he reveals himself to Jarecki (who had already made a movie depicting him as a murderer several times over) and assumes he will escape not just unscathed, but with his public reputation rehabilitated. This is another way in which the Durst of The Jinx is driven by a bizarre, self-condemning need to share his side of the story, even when it points toward prison. Meanwhile, David in All Good Things seems content to drift along the margins of society, never making much of an impression, no matter how bizarrely he behaves. 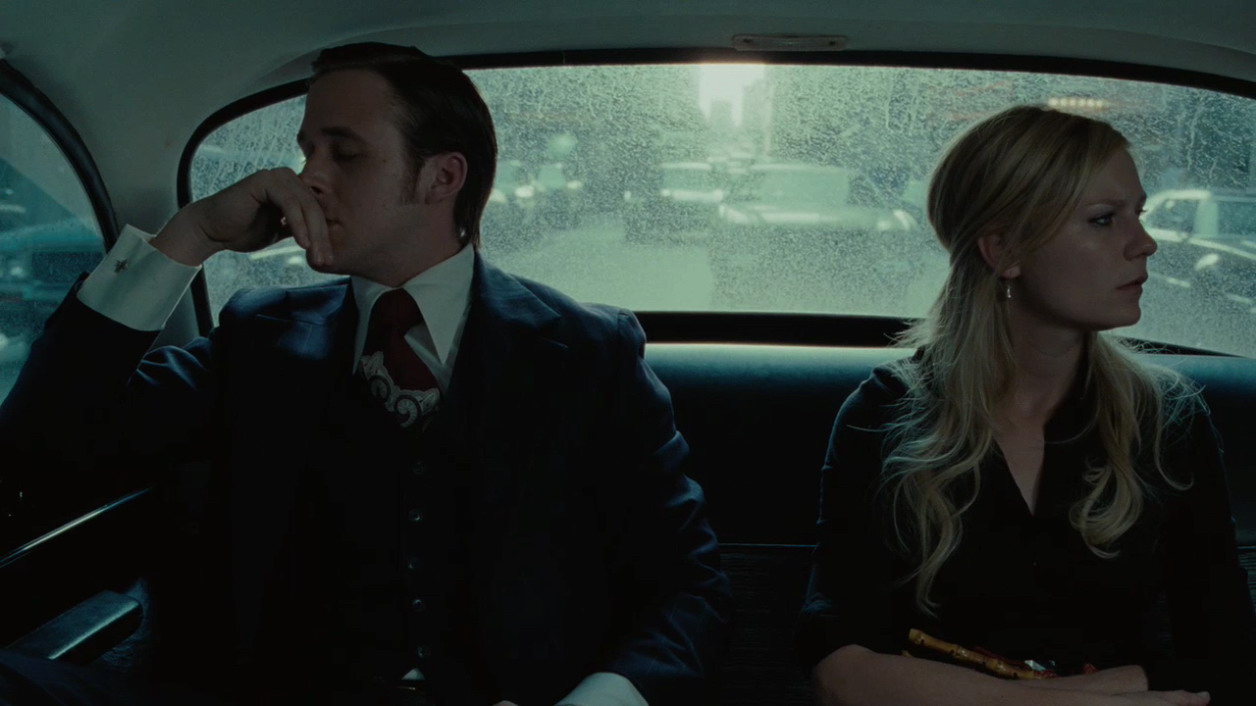 For some men, even being played by Ryan Gosling isn’t enough. While Gosling is magnetic, his charisma works against his performance. Gosling’s David is supposed to be a sour little nothing with a great man’s trust fund, not unlike Steve Carell’s portrayal of John du Pont  in Foxcatcher. But where Carell made that void at his character’s core terrifying and compelling, Gosling just fades away. By the time he’s in drag as a mute woman in Florida, he looks for all the world like a tragically misguided young man cosplaying the lead role in a gritty, true-crime reboot of Mrs. Doubtfire.

When it comes to being Durst onscreen, Gosling has nothing on the real thing. Visually, The Jinx has a strong Errol Morris influence, which is a nice way of saying it borrows its entire visual aesthetic from Morris. Like Morris’ explorations of the cobweb-laden psyches and tortured histories of Robert McNamara (The Fog Of War) and Donald Rumsfeld (The Unknown Known), The Jinx doubles as interview that eventually coalesces into an interrogation of an obscenely arrogant man who’s convinced, with some cause, that his superior intellect will let him bullshit his way out of any situation.

In The Jinx, Durst is an altogether too-active protagonist, to his eternal legal detriment. But his doppelgänger in All Good Things is a passive enigma who fades to the background of his own narrative. Where The Jinx benefits from a sense of immediacy that almost makes it feel like it’s happening in real time, with the climax of the series—Durst’s arrest—happening offscreen, All Good Things has the faded, desaturated look (and lack of urgency) of a box full of dusty old Polaroids.

As much as we love film here at The Dissolve, some stories benefit from being told in a different medium. That’s certainly the case with Durst’s life. Six 40-minute installments give the story space to breathe, and to reveal itself organically as a spellbinding mystery and a character study of privilege grown ugly, murderous, and insane. At 100 minutes, All Good Things is rushed, melodramatic, and unsatisfying. It’s riddled with clumsy exposition and hamfisted symbolism that fundamentally does not seem to know Durst. So it’s fortuitous that Durst introduced himself to Jarecki, and began what appears to finally be his undoing.

All Good Things ends with the almost comically underwhelming coda that Durst is free and invests in real estate in Florida. The Jinx provides the most dramatic coda imaginable. It dwarfs Jarecki’s earlier treatment of the same material to the point where All Good Things now seems like a footnote, the catalyst that sparked The Jinx at best. When Jarecki stumbled upon Durst and his closet-skeletons, he thought he’d discovered a case on par with the one that launched his career with Capturing The Friedmans. He did, but he bungled All Good Things to such an extent that its appropriate destiny would be as a special feature on the box set of The Jinx. The feature-film version is a cautionary tale about what happens when the right filmmakers take the wrong approach to the right story.