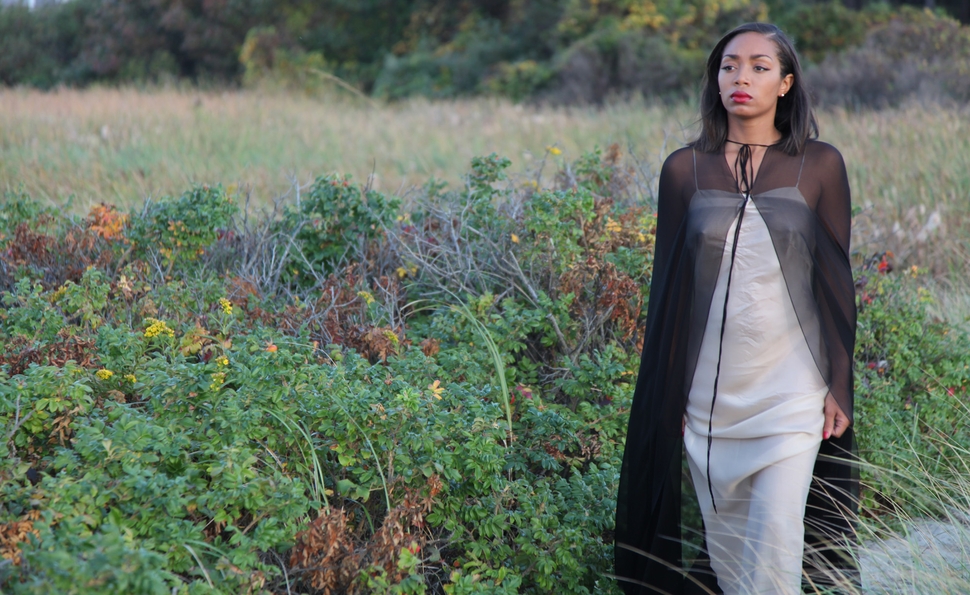 Great horror movies require more than just scares to leave a mark. At its best, the genre lets filmmakers and viewers confront real-world nightmares through fiction. George A. Romero’s 1968 classic Night Of The Living Dead is a terrifying zombie masterpiece, but its biggest impact comes from its backdrop in the civil-rights struggle. Wes Craven’s 1972 feature The Last House On The Left, widely hailed as one of the genre’s touchstones, is mostly a subpar film. But placed against its era’s anti-Vietnam backlash, it takes on a disturbing, resonant subtext.

In recent months, Americans have felt a major social upheaval, following growing awareness over the police killings of unarmed black civilians: Michael Brown, Eric Garner, Tamir Rice, John Crawford, Rumain Brisbon—the list goes on and on. In the wake of nationwide protests, images of police brutality shown on national news programs, and heated on-air debates, the tense racial climate seems ripe for repurposing—and cultural processing—in a horror context. So why is the best response one that was made 20 years ago? In Rusty Cundieff’s 1995 anthology Tales From The Hood, the first segment focuses on a black, civil-rights-minded councilman who specializes in condemning police corruption. After the police unjustly kill him, he comes back from the dead to seek vengeance. Revisiting Cundieff’s film today, it’s impossible to not think about Brown, Garner, and others. 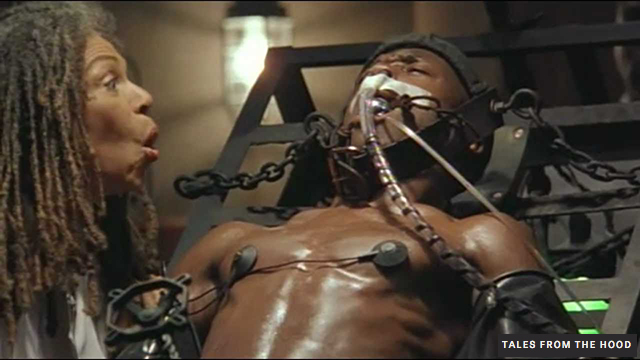 So where’s the new Tales From The Hood? The better question, though, is where’s the black horror filmmaker who’s able to make it? While women have made tremendous strides in the genre recently, from Ana Lily Amirpour’s vampire Western A Girl Walks Home Alone At Night to Jennifer Kent’s The Babadook, the darkest color in horror right now remains blood-red. The problem is only underlined by Spike Lee’s new film, Da Sweet Blood Of Jesus. He’s an iconic director with a long record of success, but his first foray into horror was only able to happen with Kickstarter’s crowd-funding help.

It took a comedian to broach the topic publicly. In an October interview with Playboy, Jordan Peele—half of Comedy Central’s Key & Peele sketch-comedy duo—revealed his lifelong dream of becoming a horror screenwriter and director. He’s currently writing a script called Get Out for Darko Entertainment, the production company of Donnie Darko director Richard Kelly. “[Get Out] is one of the very, very few horror movies that does jump off of racial fears,” Peele told Playboy. “That, to me, is a world that hasn’t been explored. Specifically, the fears of being a black man today. The fears of being any person who feels like they’re a stranger in any environment that is foreign to them. It deals with a protagonist that I don’t see in horror movies.”

Technically, that character does exist in horror cinema today, although not in any major multiplexes. He’s in Da Sweet Blood Of Jesus. The film is Spike Lee’s remake of Ganja & Hess, the 1973 cult curiosity from writer-director Bill Gunn that, due to a lack of available prints, spent decades as a genre-film Holy Grail. It never got the exposure necessary for earning mentions alongside other 1970s horror classics.

Lee’s modern-day version follows the same plot, virtually beat-for-beat: Wealthy anthropologist Dr. Hess Green (Stephen Tyrone Williams) obtains an ancient African dagger that turns him into an blood addict. As written and directed by Bill Gunn, Ganja & Hess is a hauntingly dreamlike study of addiction that borrows from vampire lore without delving into the supernatural; Da Sweet Blood Of Jesus, on the other hand, is a tonal mess, with Lee hoping to repurpose Gunn’s story and characters through bizarre moments of uncomfortable comic relief and less-than-refined acting. In this case, though, it’s tempting to overlook the film’s merits and applaud its singularity. Da Sweet Blood Of Jesus is essential because it’s unique within the genre at the moment: It’s a horror film about black characters, made by a black filmmaker.

Even at genre-heavy film festivals, where directors from all around the world are able to debut their DIY movies, it’s rare to find films from black directors. As the lead programmer for Fantastic Fest, the annual weeklong genre film celebration held at Alamo Drafthouse in Austin, lead programmer Rodney Perkins sees this lack of diversification on a yearly basis. “There just aren’t a lot of black directors or producers overall, and that’s really reflected in genre,” says Perkins. “I see hundreds of movies every year—I’ve been to Europe, South America, Canada, and all across the United States, but outside of Africa, it’s hard to find any black filmmakers working in genre.”

The most successful black horror filmmaker is Ernest Dickerson, Spike Lee’s old NYU classmate and former cinematographer. Dickerson directed the feature films Tales From The Crypt Presents: Demon Knight (1995) and Bones (2001). In 2006, horror maestro Mick Garris invited him to direct an episode for Showtime’s anthology series Masters Of Horror, which cemented his status as a genre mainstay. These days, Dickerson is a prolific television director. He’s helmed episodes of The Wire, Dexter, and Treme, among many others, but he’s also routinely called upon by the producers of AMC’s The Walking Dead for the ratings juggernaut’s most action-packed episodes. The Walking Dead is, per Nielsen ratings and fanboy conventions nationwide, the biggest show on television, and it’s also the most racially eclectic, featuring several black lead characters who, in a refreshing, bold move, never discuss each other’s skin colors or ethnic backgrounds. It’s the epitome of progressive horror entertainment, right down to the consistent employment of both Dickerson and his protégé, Seith Mann, as directors. 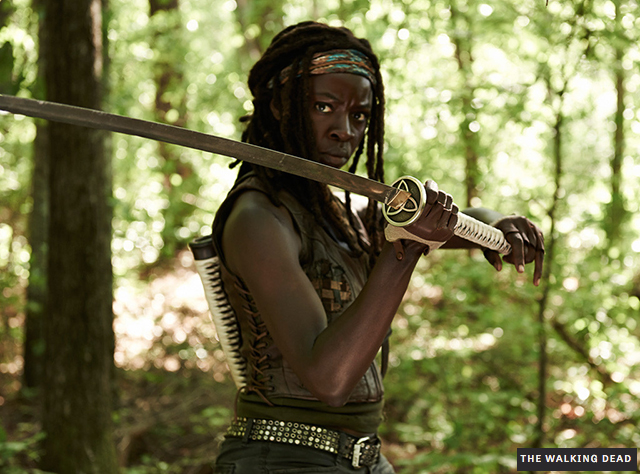 That, unfortunately, hasn’t made it any easier for Dickerson to finance big-screen projects. He and his wife are currently developing several horror scripts with black characters. So far, they haven’t been easy sells. When it comes to getting films about black people made, he finds, filmmakers are better off embracing the past. That makes it rough on Dickerson, since, in addition to horror, he’s hoping to make science-fiction films. “It’s the success of 12 Years A Slave,” he says. “One movie gets popular, and suddenly everyone in Hollywood wants to have their own slave thing, or their own racially provocative thing. There’s a TV series being made on the Underground Railroad [for the WGN America network], as well as other projects rooted in that kind of historical and racial subtext. You see it happen all the time—when one movie or one genre hits it big, you see countless responses to that. It happened when Star Wars first had its success; after that, Dino De Laurentiis made Flash Gordon because he wanted his own Star Wars. Everybody jumps on the bandwagon. I, personally, would rather look forward instead of backward.”

Dickerson recalls a story involving the 2001 science-fiction/horror film Ghosts Of Mars, directed and co-written by John Carpenter and starring Ice Cube as a prisoner battling bloodthirsty possessed miners. A friend of Dickerson’s approached the film’s studio, Screen Gems, about turning an outer-space-set graphic novel, populated by black characters, into a movie. The studio’s executives responded by saying they’d recently test-screened Ghosts Of Mars; after the movie ended, a Q&A session was held, and one of the questions was, “Well, how’d they get that nigger to Mars?” “When the studio heard that, they automatically said, ‘See, science fiction doesn’t work for black people, because black people don’t see themselves in the future,’” Dickerson says. “They made that one blanket judgment based on that one comment by that one ignorant individual. Because of that, they found an excuse not to do any more movies dealing with outer space and black people.”

Fourteen years later, that artistic desire to make fresh, diversified genre movies is no less present. In 2013, Dickerson gave a directing and cinematography seminar at Howard University; there, numerous students told him about their dreams of making science fiction and horror films. Perkins, meanwhile, senses a wave of black voices coming from overseas. “Todd Brown—Fantastic Fest’s director of international programming—was in South Africa and Nigeria last year, and he brought back some interesting stuff,” says Perkins. “In the past couple of years, we’ve been working with filmmakers in Uganda to hopefully, at some point soon, bring some of their films to the festival. It’ll be interesting to see how that develops over the next few years.”

Could the next Ana Lily Amirpour currently be scripting a debut in Nigeria or Uganda? Only time will tell, but Perkins suggests that festival programmers and independent producers start being more proactive on their ends as well. “I know there are more black people like me who grew up watching genre movies and horror,” he says. “It could just be a matter of creating some kind of outreach program to find these people and show them how to do it, to give them a platform of whatever scope to make something… surely there’s a black person somewhere in the world who can make a movie just as interesting and unique as [A Girl Walks Home Alone At Night].” 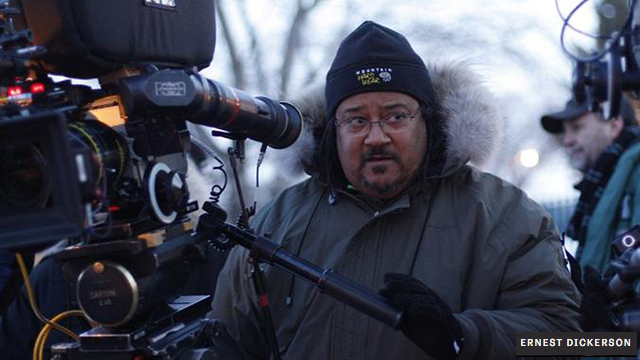 Dickerson agrees that what Amirpour has done should inspire others who feel powerless against the industry’s norms. “It’s important for young filmmakers, particularly young black filmmakers, to understand film history in order to know they can go there,” he says. “A Girl Walks Home Alone At Night is a vampire film with Italian Western influences—it clearly comes from someone who knows her history. But I’ve met a lot of young black folks who want to make films, but know nothing about Italian Westerns, or the different genres being made in other countries, and how they can apply that to what’s being made here. Don’t be afraid to look at stuff made before 1980. Since there haven’t been many horror films made by black directors since Ganja & Hess and Blaxploitation, you need to go back to that era for inspiration.”

With that inspiration in hand, Dickerson suggests a possible way to shake up the system would be taking cues from an unlikely source: Tales From The Hood. “I definitely think the change will start on the independent level,” he says, “and horror anthologies are where it’s at in that scene right now.” At every major horror festival, anthology movies have been in vogue, with new indie franchises like the found-footage series V/H/S and the robustly batshit The ABCs Of Death films providing on-the-rise horror directors with a platform that’s appealing to programmers, genre fans, and most importantly, distributors. In the past few months, two new high-profile anthologies were announced: Tales Of Halloween, in which a small town’s various October 31st nightmares are directed by folks like Darren Lynn Bousman (Saw II, III, and IV), Neil Marshall (The Descent), and Lucky McKee (May); and Holidays, a collection of holiday-themed horror shorts with Kevin Smith and the directors of the indie hits Starry Eyes and The Dirties attached. Even more apropos, one of 2015’s most anticipated anthology films is XX, an all-female-director project that’s directly on target with the zeitgeist initiated by Kent and Amirpour.

“All it would take is a group of hungry black filmmakers, or even one person, to do an anthology like that, get it picked up by one of the indie distribution companies, and then it makes a lot of noise in the genre community,” says Perkins. “As long as they can do it without being didactic or preachy. If they can be subtle with the themes but still be scary, it could be a really interesting way to address everything that’s happening in our society—the same way directors like George Romero and Wes Craven did back in the ’60s and ’70s. It’s the perfect time right now for a young black filmmaker to do that.”