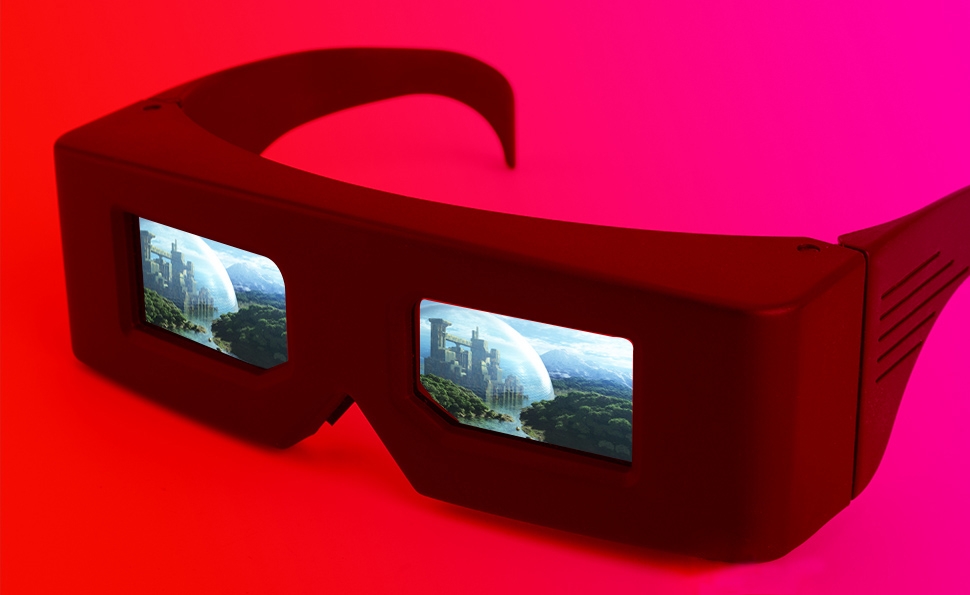 The rise and fall of the interactive movie

Early in the film Tender Loving Care, Michael (Michael Esposito) brings breakfast to his wife, Allison (Marie Caldare), a beautiful young woman who looks confused and vaguely ill. Michael explains that he has hired a nurse to come and take care of their daughter, though it seems obvious enough that Allison is the one in need of treatment. Turns out Michael and Allison lost their daughter in car accident some time ago. The shock has made Allison delusional. The nurse, Katherine (Beth Tegarden), arrives at their country home, and Michael is surprised to find that she’s a voluptuous, mysterious young blonde, who makes eyes at her new employer as strings swell portentously on the soundtrack. So far, so good: This is part erotic thriller, part psychological horror, like Basic Instinct by way of Henry James. Anyone who ever watched late-night cable TV in the 1990s can probably guess how things proceed from here.

But then something unusual happens. After Michael shows Katherine to her room—leaving her, naturally, to change into her nurse’s uniform—the film cuts to a close up of John Hurt, who addresses the audience directly. “Interesting,” he muses, looking puzzled. “I wonder why Michael was so taken aback with Katherine’s appearance… I’d appreciate it if you’d take the time to express your opinion about some of the things we’ve just seen.”

Hurt plays Dr. Turner, a psychiatrist whose role in Tender Loving Care is somewhere between guide and mediator, leading the audience through the story and posing questions between scenes. The viewers—now technically the players—are asked to complete a brief multiple-choice survey about the film so far. Some questions gauge the players’ ethics, like, “Was it inappropriate for Michael to question Katherine’s qualifications?” Others probe deeper, such as “How did you feel when Katherine began undressing in front of Michael?” (“Titillated,” “Amused,” “Offended,” or “Intrigued.”) The answers help shape how the movie will unfold. When the quiz concludes, the movie continues, now subtly tailored to match the viewer’s desires.

Tender Loving Care was released in 1998, and it’s among the most prominent examples of a format known as the interactive movie. Interactive films enjoyed a brief period of mainstream popularity in the mid-1990s, on PC and on consoles like the Sega CD and Philips CD-i, when then-burgeoning CD-ROM technology made it possible for game developers to integrate live-action video into the architecture of an otherwise animated game. But the concept itself is even older. The idea of furnishing a motion picture with a nominal degree of interactivity was pioneered, in somewhat rudimentary form, by a laserdisc-based arcade game called Dragon’s Lair, first released in 1983. Essentially a narrative cartoon by Secret Of NIMH director Don Bluth, Dragon’s Lair prompted players to select an action—swinging a sword, for example—that would trigger a specific animation. The game, Bluth boasted, “combined the unique capabilities of both computer and animation and formed a new style of entertainment—participatory movies.” It took another decade for the technology to catch on.

In 1993, Graeme Devine and Rob Landeros, co-founders of a development company called Trilobyte Games, released their hotly anticipated debut, The 7th Guest, a haunted-house mystery game inspired by Twin Peaks. Devine and Landeros, realizing the technological possibilities of CD-ROM, devised a method by which live actors, filmed in front of a green screen, could be seamlessly grafted onto digital backgrounds, a bit like a videogame version of Bedknobs And Broomsticks. The graphics weren’t particularly sophisticated, but the novelty of their achievement, and what it suggested about the future of videogames, had an enormous influence on the industry’s direction.

This “Hyper Movie,” as Devine and Landeros called it, was an instant hit. Bill Gates called The 7th Guest “the new standard in interactive entertainment.”And full-motion video, as the invention was known, became the hot new trend in gaming almost overnight. Work on a sequel began immediately. Hoping for higher production values and a more cinematic quality for the live-action visuals, Landeros hired David Wheeler, who had experience working in film and television, to direct the video portions of The 11th Hour. It didn’t work out well: The shoot went over budget, the demands on the programmers proved out of control, and Devine felt he and Landeros had painted themselves into a corner by asking too much of themselves for their follow-up. The 11th Hour was released in 1995, and became a failure. But while the project was a flop for Trilobyte, the experience convinced Wheeler that for him, interactivity was the future of the movies.

Around this time, Wheeler read a book called Tender Loving Care, by Andrew Neiderman, author of The Devil’s Advocate. “I really liked the book,” Wheeler told me by phone. “It was a very scary, realistic horror story, and I wanted to adapt it.” He began work on pre-production for a film version in Hollywood, but hit a dead end when financing fell through. With a movie ready to go and no production companies interested, he turned to Landeros and the team from The 11th Hour. “We had this story that was set in some fairly confined areas,” Wheeler explains. “So we decided we’d shoot this movie and then re-create those settings in animated 3-D as game-type environments. You watch part of the movie, which was passive, and then go into the game world, which was active. So if you could see somebody writing a note in the movie but you couldn’t see the note, you could go and find that note in the game and go and read it.”

But Wheeler and Landeros wanted something deeper from their interactivity—something psychological. Wheeler remembered that in his favorite book, Aldous Huxley’s Brave New World, people no longer went to the movies, but to the “feelies,” which could take “biofeedback” from the audience and respond to their desires. “This is what we need,” Wheeler said. Biofeedback wasn’t technologically possible, but Wheeler thought he might be able to replicate the basic idea. “We created a program that would let the computer track the psychology of the viewer,” Wheeler says. “It then creates a profile of that viewer so that the movie would unfold according to what the computer felt that particular psychological profile would want to see.” Wheeler went to the psych department of Southern Oregon University for help. “They came up with a human psychological profile, which has eight basic human traits and their opposites. Every answer to every question pinned somewhere on that psychological profile, on one of those 16 points. As you began to accumulate answers, it would form a graph, and that would affect the movie.”

Wheeler shot each scene a dozen different ways, and the finished product, he claims, is rarely the same for two different viewers: There are seven different endings to the main story, and an enormous number of smaller variations throughout. The version of the film you see tells you something about yourself—or perhaps about the group you’re with. “We designed it for a single player,” Wheeler says, “but it became a very popular party game, just because the questions are so funny.” And so, admittedly, is much of the film: Its erotic-thriller vibe is a relic of the 1990s, and many of its more ostentatious flourishes would make Brian De Palma blush. Reviews—in videogame magazines, for the most part, as film critics largely ignored it—were mostly positive, and Wheeler looks back on it as a modest success. “It was really popular in Germany, for some reason,” he offers. Otherwise, it’s been more or less forgotten.

Tender Loving Care generated a sort of spiritual sequel in Point Of View, directed by Wheeler and released in the early 2000s, but by that time, the interactive-movie trend as Wheeler practiced it had all but fizzled out. “Interactive movies,” explains critic Bernard Perron, “came to have a very bad reputation due to the limited possibilities of their branching structures, their lack of interactivity, the bad acting of their cast, and, in the case of the earlier interactive movies, their low-resolution pictures and the dismal quality of their playback.” Part of the problem, perhaps, was that interactive movies were stuck between two audiences: too much like games for moviegoers, too much like movies for gamers.

All of the publishers Wheeler approached after Point Of View told him the same thing: “People will never, ever want to watch movies on their computers.” In the decade since, technology has evolved, and so have viewing habits; today, watching movies on a computer, or a computer-like device, is second nature. We’re also on a new frontier of interactive media: the virtual-reality simulation, as heralded by Oculus Rift and Google Glass, seems poised to break into the mainstream. In the 15 years since Tender Loving Care’s release, Wheeler says he hasn’t seen anything emerge that might reasonably be called an interactive movie in the same way, but the form has still been developing on the periphery. As The Dissolve’s Tasha Robinson reported in a pair of articles earlier this year, a number of innovative filmmakers are marshalling a world of new technology to change the way we engage with motion pictures, picking up where Wheeler left off with forking-path short films and immersive VR documentaries.

Though these efforts lack, for now, the psychological aspirations of Wheeler’s proto-feelies, they do suggest that interactivity may have a place in the future of movies. Wheeler attributes the decline of the interactive movie as he practiced it to the concurrent rise of first-person shooters, whose ubiquity—and boring consistency—he believes dissuaded publishers from investing in more the more radical projects he hoped to develop through the 2000s. (Wheeler went on to work on a number of games for the PlayStation 3 and Xbox 360, but titles like 50 Cent: Blood On The Sand and Ghostbusters: The Video Game were, alas, not so boundary-pushing.) It may be true that the popularity of first-person shooters accounts for the absence of blockbuster interactive movies on the PlayStation 4. But the truth is that the future of the interactive movie isn’t likely to be sold and packaged like a new Call Of Duty at all. The innovators in the field of interactive media aren’t working with triple-A budgets or large-scale studio backing; they’re working with the tools available to them, and they’re making their work available however they can.