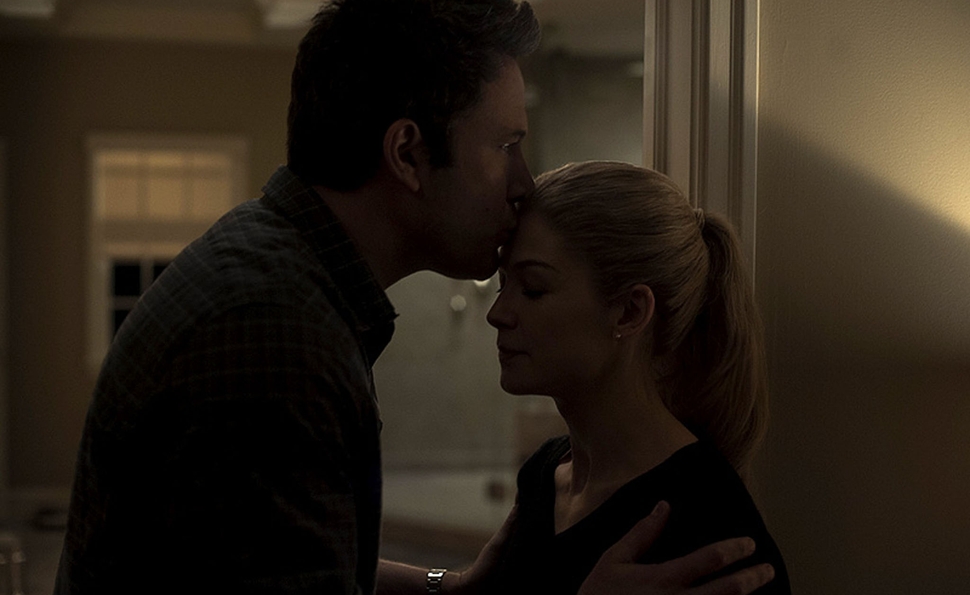 The following essay contains significant spoilers for David Fincher’s Seven and The Curious Case Of Benjamin Button, and a few minor scene descriptions from Gone Girl.

The early reviews of David Fincher’s Gone Girl are mostly positive (86 percent as of this writing on Rotten Tomatoes), but there’s a persistent theme among the movie’s naysayers (and even some of its fans) that the material Fincher has chosen is “trash.” (Or, more specifically, a “trashy airport novel.”) Gone Girl may be a good film for what it is, the argument goes, but what it is is something far beneath its director’s prodigious talents. Fincher is slumming it—perhaps slumming it stylishly and successfully, but slumming it nonetheless.

There are a few obvious rebuttals to this line of thinking. Fans of Gillian Flynn’s original novel might defend the book on the grounds that it’s more than a page-turner, with much to say about men and women and the way they do (or, more frequently, don’t) relate. Genre fans would argue popularity doesn’t automatically equate to trashiness—and that similar charges were leveled against filmmakers like Alfred Hitchcock for decades, until French critics reclaimed his similarly lurid material as art in the 1950s and ’60s. Fincher fans would note that while the director has adapted F. Scott Fitzgerald for the screen, he’s also previously adapted several books that people read on airplanes and subways and in their homes. His filmography also includes a second sequel to a haunted-house movie set in space, a drama about an insomniac talking to an imaginary friend, and a thriller with the logline “Home Alone starring a single mother.” Gone Girl’s subject matter—revenge, obsession, kidnapping, battles of the sexes—is no aberration in Fincher’s career.

But perhaps the most compelling rebuke to the idea that Gone Girl isn’t worthy of Fincher, or that he has no authorial stake in the material, is the fact that Flynn’s story—about the exceedingly nasty fallout of an unhappy marriage—lets Fincher finally foreground one of the most persistent background themes in all his work: the inherent incompatibility of men and women, and the inevitability of an unhappy ending in almost every relationship.

Fincher’s first film, Alien 3, was a difficult one, taken away from him during post-production and re-edited without his approval. His follow-up and breakthrough as a feature filmmaker was Seven, a pulpy (some might say “airport novel-esque”) cop movie about a pair of mismatched partners on the hunt for a serial killer. On its surface, Seven is a mystery. But at its margins, it’s also about the impossibility of marital normalcy in a world gone mad, as represented by the relationships—or lack thereof—involving the two main characters, detectives David Mills (Brad Pitt) and William Somerset (Morgan Freeman). It was released in 1995, the same year Fincher and his wife, Donya Fiorentino, divorced. 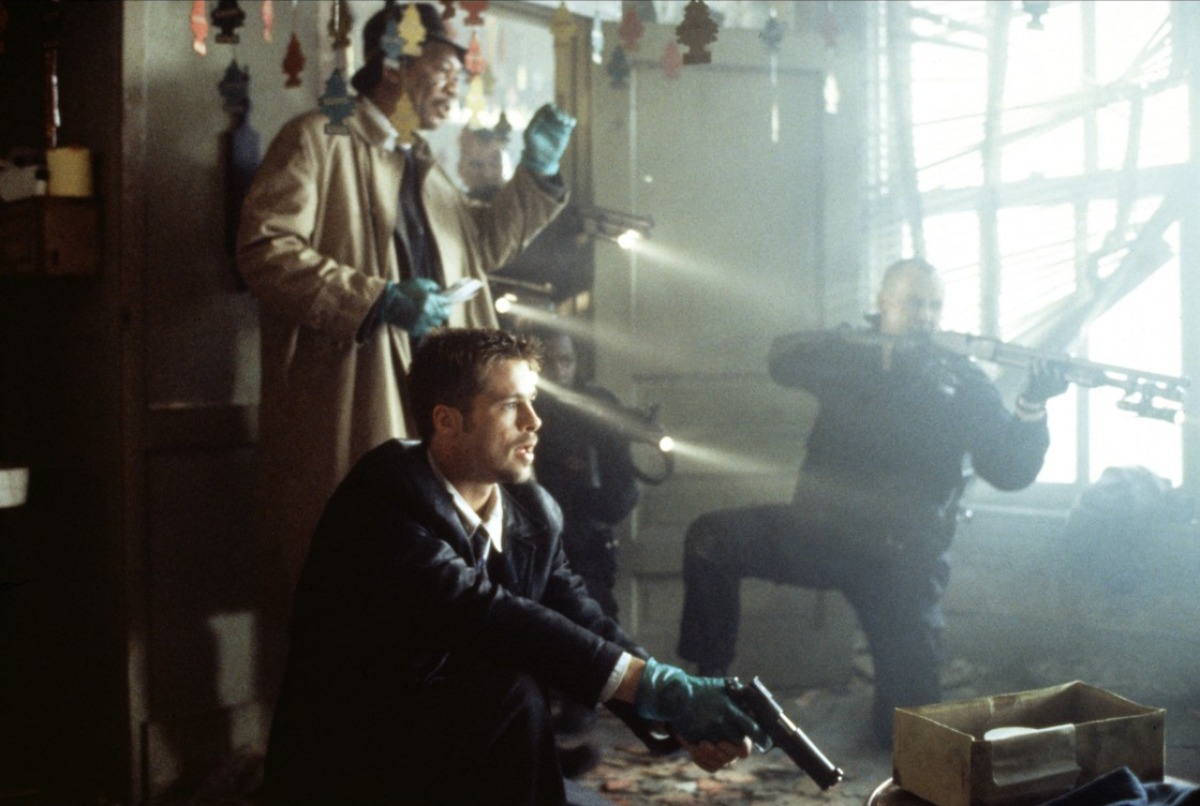 Mills is married to Tracy (Gwyneth Paltrow); the couple has just moved from the suburbs to the unnamed city where Seven is set for his new job working homicide as Somerset’s partner. Tracy loves her husband, but hates her new surroundings; she has trouble telling any of this to Mills, so she confides in Somerset instead. Tracy also tells Somerset that she’s pregnant before telling her husband. Mills and Tracy seem happy, but the lines of communication are clearly closed to an unhealthy degree.

The impending baby complicates an already-unsteady marriage, and Somerset can relate. He tells Tracy about a past relationship of his own that involved an unwanted pregnancy. He pushed his girlfriend to get an abortion, and she did; not long after, the relationship ended, and Somerset remains alone to this day. “I can tell you now,” he says to Tracy, “I’m positive that I made the right decision. But there’s not a day that passes that I don’t wish that I had made a different choice.”

Somerset, by all accounts a decent, honest man and a superior police officer, couldn’t sustain a relationship with a woman, and by the end of Seven, Mills’ marriage ends as well, after serial killer John Doe (Kevin Spacey) murders Tracy as part of his elaborate master plan. “I tried to play husband,” Doe says to David as he tries to coax him into committing his final killing for him. “I tried to taste the life of a simple man. It didn’t work out.” That line wouldn’t sound out of place coming out of the mouth of Ben Affleck’s Nick Dunne in Gone Girl.

Men and women in David Fincher movies often try to taste the simple life; it almost never works out. Even in films where relationships play a relatively minor role, the backstories almost always involve painful dissolutions. Michael Douglas’ Nicholas Van Orton from The Game is divorced; so is Jodie Foster’s Panic Room character Meg Altman, who moves into the New York brownstone that serves as the film’s setting after her husband leaves her for a much younger woman. The entire film springs from that breakup—as does tech entrepreneur Mark Zuckerberg’s entire empire in The Social Network. When he’s dumped on a date by his girlfriend Erica (Rooney Mara), Zuckerberg (Jesse Eisenberg) begins creating a website for revenge, one that will let fellow Harvard students vote on female classmates’ physical beauty. The site, Facemash, eventually morphs into Facebook, bringing Zuckerberg wealth, fame, popularity, and a new girlfriend. But at the end of the movie, he’s still alone, waiting for a response to a friend request from Erica. The finale of The Girl With The Dragon Tattoo provides a similarly unhappy one for its antisocial hacker character, as Lisbeth Salander (Mara) watches from afar as the man she’s fallen in love with, journalist Mikael Blomkvist (Daniel Craig), reunites with an old girlfriend. 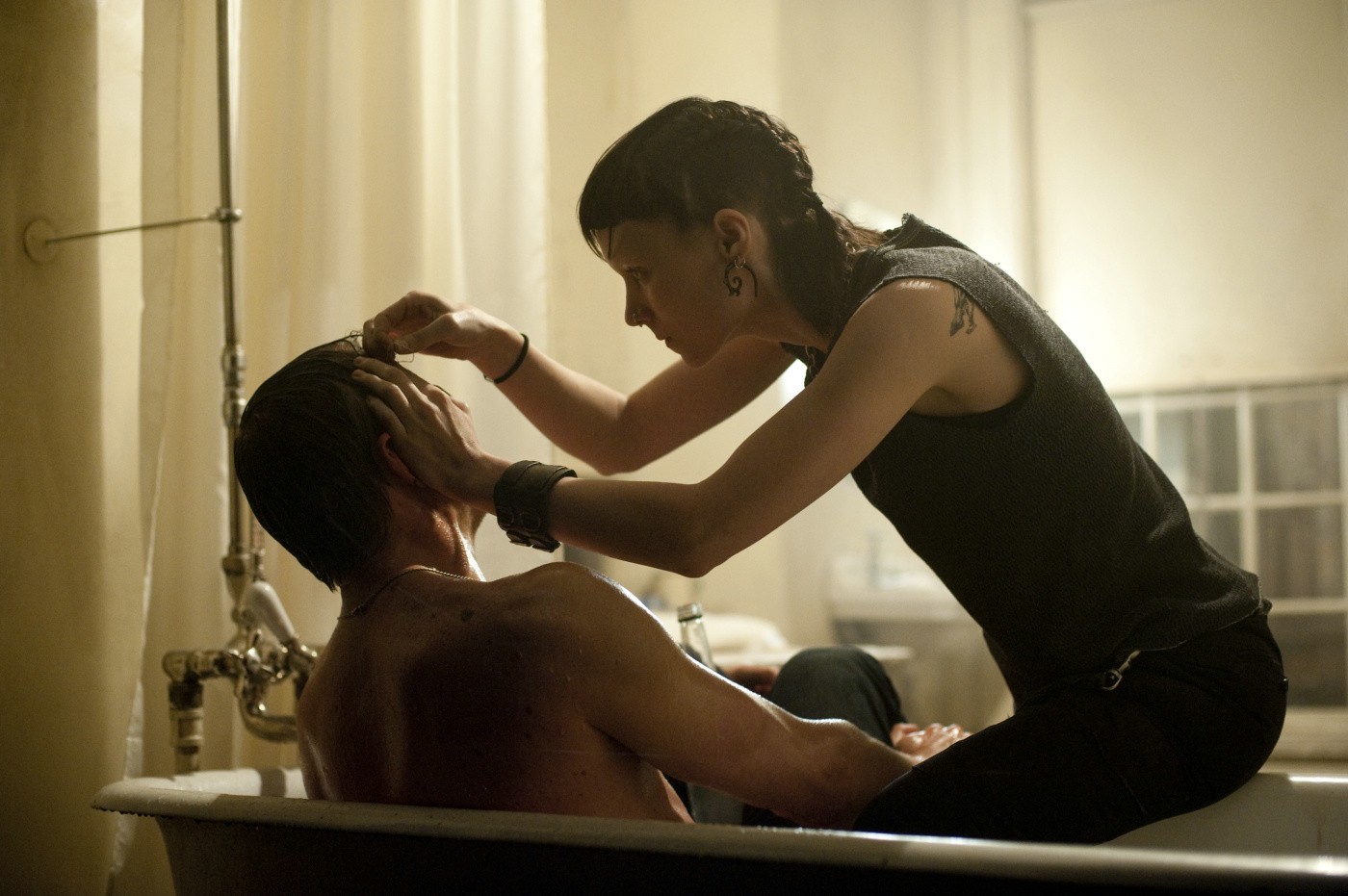 Even Fincher’s most romantic movie is sad and cynical. In The Curious Case Of Benjamin Button, Pitt plays a man who is born old and grows younger as he ages. When he’s 7, he looks like he’s 70. When he’s 70, he looks like he’s 7. The love of his life is Daisy (Cate Blanchett), but their relationship, like so many in Fincher’s movie universe, is doomed. When they’re both children, Daisy’s grandmother forbids their spending time together; when Daisy becomes a Broadway dancer, her youthful immaturity and her job take her away from her one true love. Finally, after Daisy suffers a career-ending injury, they find each other again and become lovers. “We’re meeting in the middle,” Daisy remarks as she looks at herself and Benjamin in a mirror.

That meeting is short-lived. Benjamin and Daisy are heading in opposite directions. As in Seven, an unexpected pregnancy creates instability in the relationship, as Benjamin, who will soon regress to childhood and need a mother of his own, refuses to be a burden to Daisy and leaves. She finds a husband, marries, and raises their daughter; it’s a life, but not the one she wanted. During their brief period of happiness together, Benjamin remarks, “I was thinking how nothing lasts. And what a shame that is.” In Benjamin Button—and nearly all Fincher’s movies—love, even true love, is fleeting and impermanent. The movie suggests Daisy and Benjamin are soulmates, fated to be together—but only temporarily.

The characters in Gone Girl age more traditionally, and their relationship sours more angrily, but their rise and fall are much the same. Nick and Amy Elliott (Rosamund Pike) meet in a scene out of a clichéd romantic comedy, bantering at a party, then wandering through the streets of New York and into a “sugar storm” (literal swirls of powdered sugar floating through the air) where they share their first kiss. Amy’s diary recounts the early days of her affair with Nick, and they are filled with intimacy, laughter, and happiness. Those stories are verified: Nick and Amy were in love. They did have a fairy-tale romance. But five years later, it’s already fallen apart.

There are echoes of Gone Girl throughout Fincher’s previous work. Like Fight Club, it involves a character essentially inventing an entire persona to deal with their complicated feelings toward a member of the opposite sex. Like The Social Network, a perceived emotional betrayal sparks an elaborate, brilliant plan for vengeance. And Nick and Amy’s arc recalls the one between Zodiac’s amateur sleuth Robert Graysmith and his wife Melanie (Chloë Sevigny). She knows exactly what she’s getting into with Robert from their first date, when he spends the night thinking about the case rather than her; after waking up on his couch the next morning, she calls it the “most interesting date” she’s ever had. But a few years later, she finds Robert’s continuing investigation a lot less interesting; eventually, she moves out of their home.

Fincher’s Gone Girl opens with an Affleck voiceover drawn from Flynn’s original novel. “When I think of my my wife, I always think of her head,” Nick says, before asking a series of questions: “What are you thinking? How are you feeling? What have we done to each other? What will we do?” In a 2007 interview, Fincher claimed the scariest thing about a serial killer is that they’re “somebody who lives next next door to you,” doing horrible things right under your nose for months or years. His films raise the question of whether Fincher is even more afraid of the one person closer than a neighbor: the one you live with, sleep next to, but still don’t fully know. You may even love them—for a while. But the questions remain. They may not be tasteful questions, but that doesn’t mean they aren’t worthwhile.