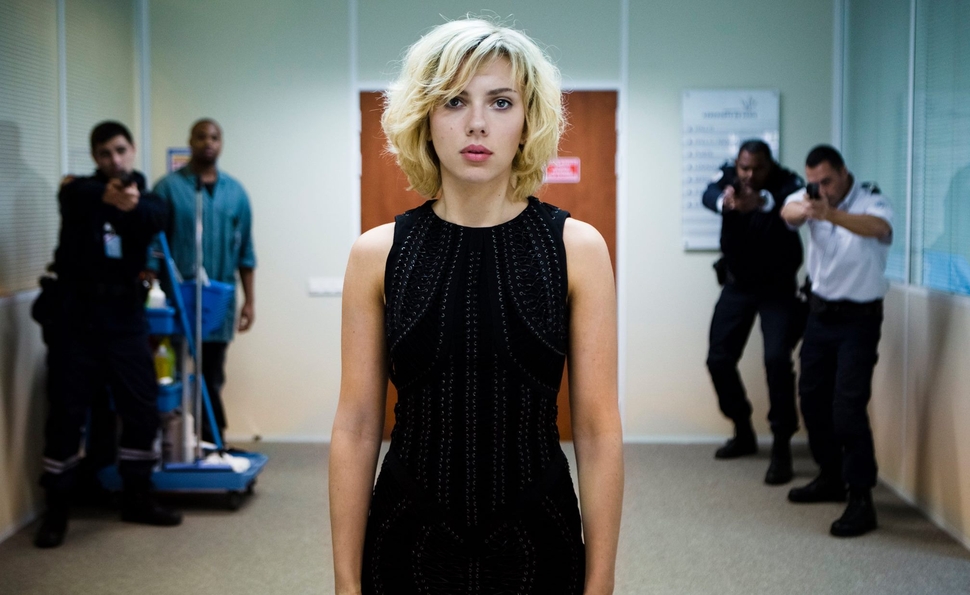 Lucy and the enduring appeal of the instant upgrade

For the title character of Lucy, the silly but stylish new Luc Besson thriller about a woman who accidentally accesses the full, dormant power of the human brain, superpowers are kind of a drag. For one thing, Lucy (Scarlett Johansson) only gains those powers because she’s kidnapped, terrorized, abused, and forcibly implanted with a drug payload she’s supposed to mule for her captors. For another, the accidental overdose that boosts her brain use past the entirely mythical 10 percent human average also starts rapidly breaking down her system, and is likely to kill her within 24 hours of the initial exposure. In film, at least, post-human abilities always come with a hefty price tag: In this case, the intellect and powers of a god, alongside the lifespan of a mayfly.

But price or no price, Lucy is just the latest in a line of films tapping into the enduring fantasy of the quickie human upgrade, whether it’s magical, technological, chemical, biological, or just beyond human understanding. No matter how heavy the cost, the lure of instant knowledge is powerful—the lure of instant anything is powerful. Lucy comes across as mighty derivative because it’s built around such a beloved trope, with an audience-identifiable, initially ordinary character instantly becoming an unbeatable badass. And it’s ultimately a disappointment because it doesn’t do enough with that trope—it doesn’t approach it creatively enough to stand out from many similar films, and it doesn’t ultimately let viewers access or even understand what’s going on with its protagonist. It’s daring in some ways because it doesn’t take the obvious narrative paths, but the woolly headed roads it does head down aren’t entirely satisfying, either.

The instant-upgrade story is appealing from a filmmaking perspective because anything that lets a story skip past lengthy processes and cut straight to the results tends to be helpful for the limitations of film runtimes. When Neo becomes a martial-arts expert in The Matrix just by uploading a kung-fu module into his brain (“Dude.”), or failed fiction-writer wannabe Eddie takes a pill and turns into a genius in Limitless, the story doesn’t have to pause to deal with the passage of time, or address how an unfocused, dippy schmoe got himself together enough to accomplish something time-consuming and difficult. Instant upgrades are efficient in action stories that just want to get the action rolling.

More significantly, instant-upgrade stories play into the wish-fulfillment fantasy of awesomeness without effort, awesomeness without waiting, awesomeness anyone can achieve, regardless of personal limitations. When 98-pound weakling Steve Rogers gets strapped into an experimental device and emerges as a gleaming god with pecs the size of his head in Captain America: The First Avenger, it’s a standard superhero origin story, like Peter Parker’s or the Fantastic Four’s, but with an added sense of familiar real-world effort avoided. Most superheroes get powers, like a danger sense or the ability to turn invisible or burst into flame. Captain America gets to have a body-builder’s physique and an athlete’s reflexes without putting in thousands of hours at the gym, the track, or the ring. 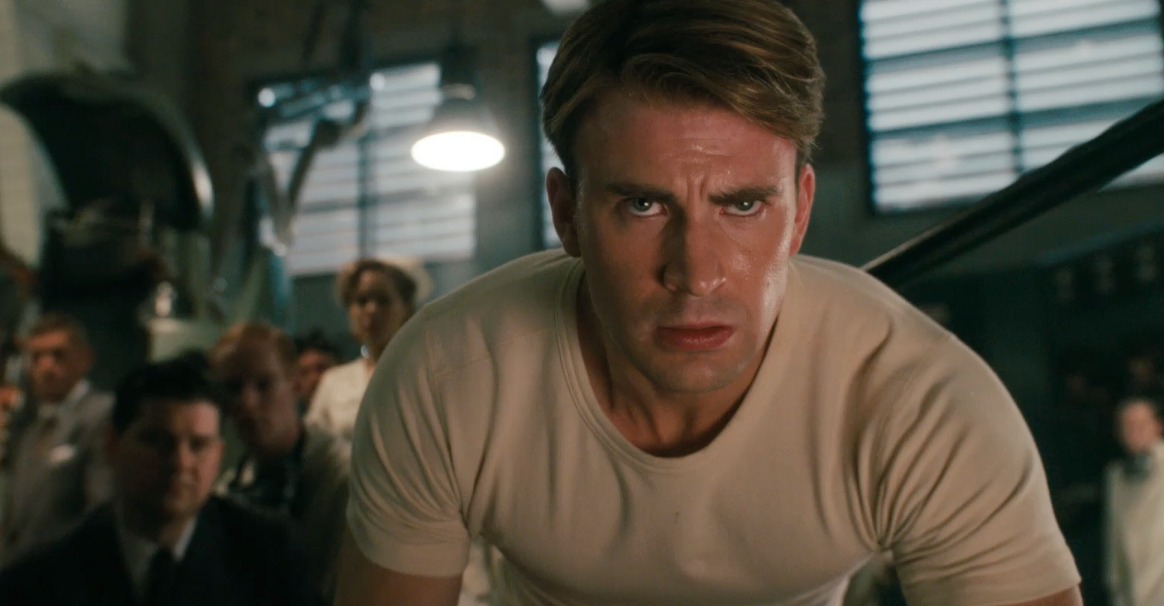 But at the same time, Captain America started out short and spindly, and no amount of real-world gym effort would have given him that body and those abilities. Most instant-upgrade fantasies aren’t just about a protagonist skipping all the boring prep time that goes into becoming an expert: They’re about protagonists surpassing their natural limitations, then often surpassing everyone, even the people born with more advantages, even the people who did put in the hard work to gain their skills. William Cage in Edge Of Tomorrow does put in the effort to go from cowardly battlefield noob to combat-hardened super-soldier, at great personal effort and pain—but the film bypasses the unsatisfying part of the story, and just shows audiences a perspective where he rapidly evolves past his contemptuous, patronizing, more experienced squaddies, to the point where midway through the film, he doesn’t even break stride when he takes out the alien that was about to kill them all. Cage spends the movie learning his combat moves so completely that he goes beyond human possibility.

And that’s what Lucy is really about: taking the uplift fantasy, the superpowers fantasy, the fast-forward-to-superiority fantasy, to a particularly extreme level. Some have slammed it because the “Humans only use 10 percent of their brains” device is so patently, provably bullshit, and they make a fair case. If the 10-percent-brain theory were presented in passing, it might pass as just a price-of-admission plot device, like time travel in Looper, or the many-worlds theory in Coherence. Instead, Lucy doubles down on the theory, repeatedly flashing Lucy’s latest brain-power-percentage update on the screen, and adding long, laborious sequences of Morgan Freeman’s character explaining the idea, in one of those stock cinematic classroom lectures that only exists to lay out a movie’s themes. (See also: Jade, The Happening, Copycat, The Da Vinci Code, etc.) It’s a dumb, unnecessary device, and it’s badly handled, to the point where it’s made the film pointlessly controversial. 2001: A Space Odyssey and Akira both covered a similar idea—“The next step of human evolution may be beyond our comprehension or control”—without clothing it in easily disproved junk science, and putting viewers on the defensive before they even get to the theater. But while it’s a limiting factor, it isn’t the film’s biggest problem; it’s just meant to illustrate the degree of Lucy’s newfound superiority. It’s a problem because it trips up the instant-upgrade trope instead of strengthening it.

Lucy’s disappearance from the story in a human capacity isn’t the problem it’s been laid out to be, either. Critics have jumped on the film because once Johansson’s character accidentally absorbs the drug that expands her mind to inhuman levels, she rapidly develops past fear and anger, and turns into the kind of chilly, controlled, cerebral creature Johansson also played earlier in 2014, in Under The Skin and Captain America: The Winter Soldier. In essence, she stops being a human being. But as with 2001 and Akira,  that’s beside the point. For one thing, Lucy was never much of a person to begin with; Besson’s script launches in medias res, taking no time to introduce Lucy or offer any sense of her identity before her drug-induced apotheosis. She’s a cipher; the narrative loss of her humanity is no great loss to humanity.

And for another, the entire point of the story is her evolution beyond fear, anger, or other comprehensible human emotions, which is what takes the film on its most interesting course. Lucy could have easily been a standard exploitation-thriller rape-revenge story, where the main character is traumatized, then becomes superhuman, then avenges herself. Given its similarity to 1950’s DOA and its manic modern remake Crank, it could have been another film about a rapidly dying protagonist tying up loose ends. Instead, Lucy loses interest in revenge the second she starts evolving. She doesn’t bother killing the author of her torment when she has him in her hands; she only bothers mowing down his minions when they purposefully get in her way. The film becomes more thrilling because her interests aren’t as pedestrian as bumping off the people who’ve hurt her. She almost certainly hurts more innocent people than gangsters, from shooting a patient on an operating table to clear it for her use to causing countless car accidents en route to meet Freeman’s character. Which makes her not remotely a sympathetic protagonist—but then, she isn’t meant to be. She’s a badass who’s responsible to no one, a lamentably popular figure in film right now, but a figure that goes right along with the human-upgrade trope.

Where Lucy falls apart is in its failure to keep viewers caught up in the pleasures of the particular fantasy it’s exploiting. Lucy quickly becomes a Batman-esque superhero, capable of outthinking, outshooting, and outfighting her captors. From there, she becomes an X-men type of post-human superhero, with telekinetic powers, the ability to see and manipulate electronic signals, and much more. After that… the film seems uncertain what she is. She delivers a vague lecture about human capacity and time that doesn’t mean much, then disappears into a process the film only vaguely defines, in order to produce a result that’s never spelled out. And that’s where the film loses its focus—in its inability to imagine, in any concrete way, what human super-evolution might actually mean, for Lucy or for the people around her.

Again, other films (and the books they’re based on) have explored the same idea, but they’ve taken more productive paths. Watchmen’s Dr. Manhattan is a post-human being with nigh-infinite powers to do anything but comprehend human emotion, but he’s so far outside the realm of the story’s other characters that he becomes more a barrier for them to work around than a protagonist. No one laments Will Caster’s loss of humanity when he becomes a sentient super-computer in Transcendence, because the story’s focus is on what his ascension means to the lowly humans living in the world he’s trying to take over.

Which isn’t to say Lucy would be a better film if Lucy were the villain. In its way, it’s unique because she isn’t a hero or a villain. The film’s refusal to take a predictable path about what she’s capable of, what she’s interested in, or what she might do next puts viewers in a passenger-seat position where instead of anticipating her next step, they just have to sit back and accept the ride. Which is exactly where Besson wants viewers in his films anyway—in a passive position of taking in the spectacle without questioning the logic. At the least, it’s a visually striking and unexpected journey. But it doesn’t stand up to much after-the-fact thought, because it ultimately says so little about the themes it taps.

And that’s because Lucy is a wish-fulfillment story that’s entirely unclear about what wishes, exactly, it’s fulfilling on its audience’s behalf. Lucy’s uplift beyond human weaknesses, needs, and limitations is a perfect opportunity to examine what about those things makes us human, and what we might be without them, but the film doesn’t seem to have any ideas in those areas. Her effortless capabilities are a chance to explore what someone might do with infinite power—but the film shrugs that off as well, once the question of immediate survival is no longer an issue. And once it becomes impossible to empathize with Lucy, the film doesn’t offer any balancing rooting interest, any strong outside perspective to contrast with her perspective—no Kaneda from Akira or Evelyn from Transcendence or Janey from Watchmen, trying to reconcile the posthuman version of a familiar figure with the original human version. Lucy is the kind of film usually made so viewers can latch onto an audience avatar, by identifying with someone ordinary who becomes someone exceptional. But Lucy baffles that process by making it impossible to identify for long with anyone in the film, either the far-beyond-human protagonist or the barely developed ordinary people around her. And there’s no instant, satisfying fix for that.