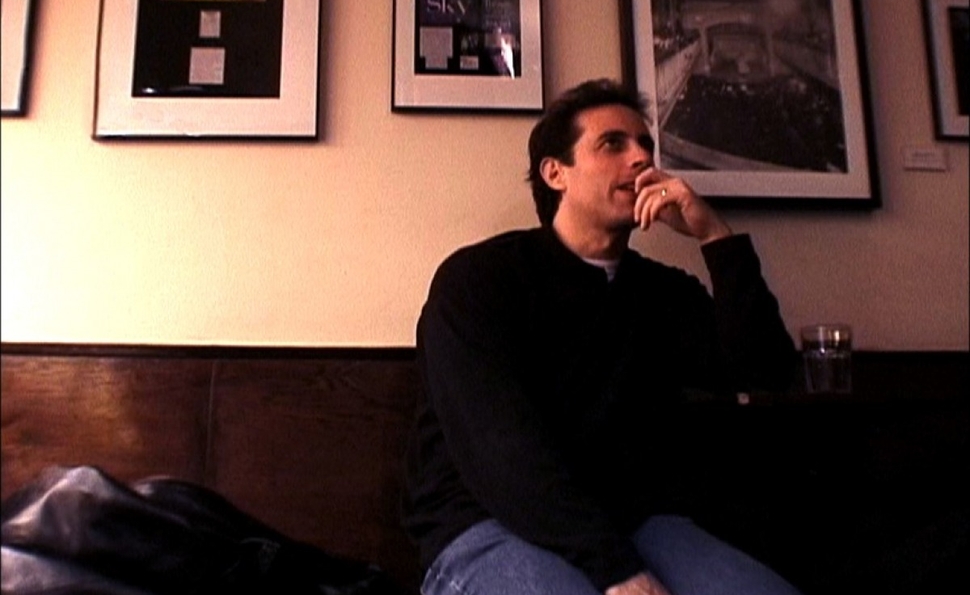 Hear that sound? That mixture of purring vintage engines, whistling cappuccino-machine steam, twinkling hotel-lounge jazz, and self-satisfied laughter? It’s a new season of Comedians In Cars Getting Coffee, Jerry Seinfeld’s stunningly popular celebration of showbiz and product placement. The web series debuted in 2012, years after behind-the-curtain comedy had become arguably the most popular kind of comedy. By that point, we’d already seen Tough Crowd With Colin Quinn, The Aristocrats, Louie, and the Seinfeld-starring HBO special Talking Funny, all of which implied that comics’ truest, most hilarious moments occur among themselves, backstage and without bits. And that’s not even counting the veritable ecosystem of podcasts that emerged in the wake of Marc Maron, Adam Carolla, and Chris Hardwick’s success.

But Comedians In Cars leapfrogged them all. The show recently began its fourth season, the first since it was featured in a Super Bowl commercial and earned Seinfeld his best press since his sitcom ended. So that other sound you hear? That’s the backlash, including charges that Seinfeld is elitist, racist, and derivative. Whatever you make of those claims, the show’s interviews aren’t as long, insightful, or funny as the average podcast conversation. Seinfeld breathes such rarified air that he occasionally books guests no one else could—his David Letterman episode is maybe the most revealing glimpse of the Late Show host ever filmed—but generally, the episodes flit from one carefree conversational tidbit to another, padded with espresso montages and wide shots of L.A. and New York roads. All but a few of Seinfeld’s guests are hugely successful and comfortable. For comedy aficionados, Comedians In Cars is the least-essential product of the current vogue for backstage shoptalk. 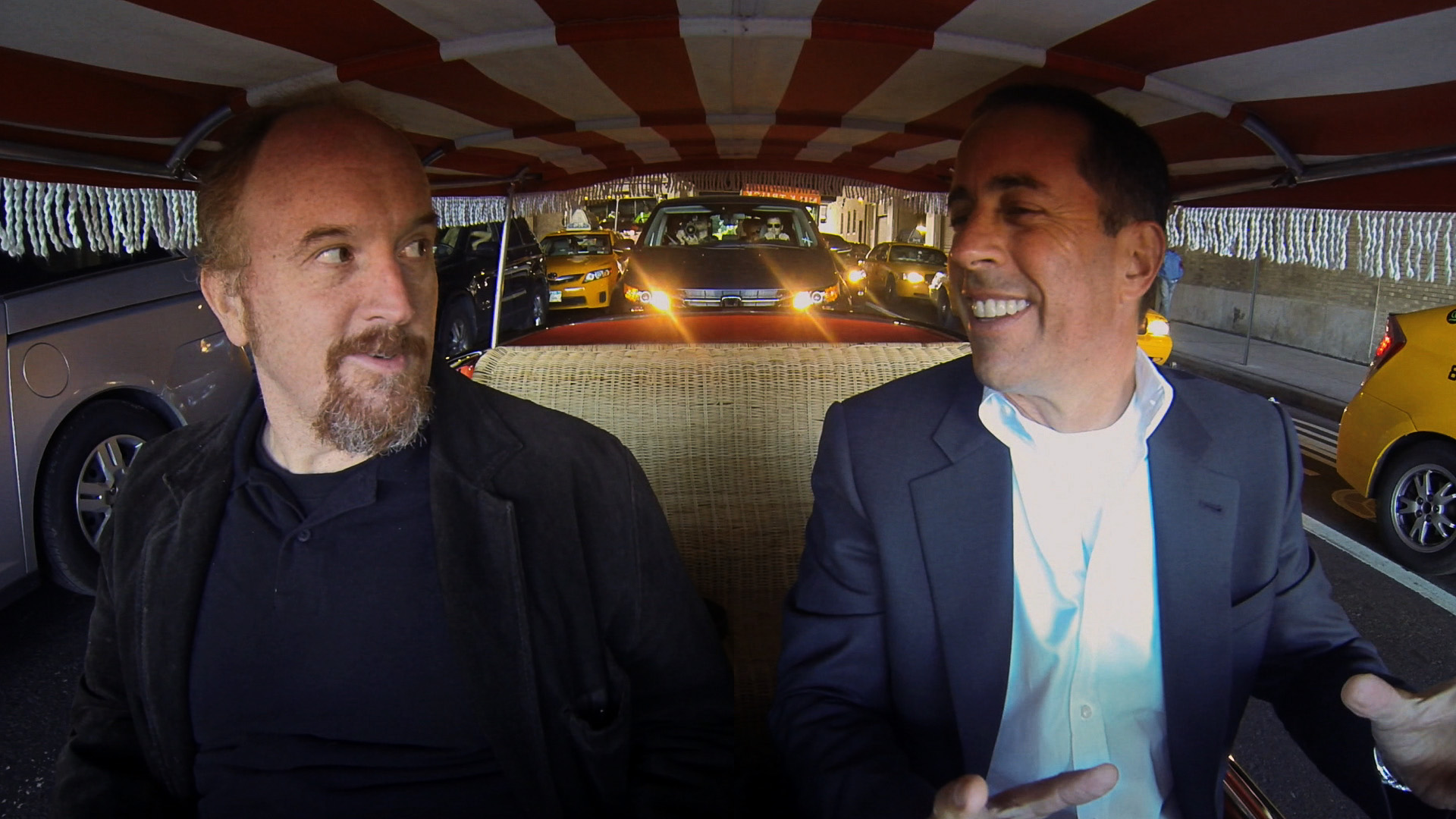 Thing is, for all the slightness of his current gig, Seinfeld basically inaugurated this trend more than a decade ago. Having publicly retired 20 years of material in the special I’m Telling You For The Last Time, he invited a documentarian, Christian Charles, to trail him as he went back to comedy clubs in search of every stand-up’s most pressing goal, “a new hour.” The resulting film, Comedian, hit theaters in 2002, before Tough Crowd or The Aristocrats, and it also features more podcast-like discussions about the challenges and loneliness of stand-up than either. With its rapid cutting, omnipresent jazz soundtrack, and bizarrely persistent focus on men eating, Comedian almost seems like a first draft of Seinfeld’s web series. (A few of the series’ guests, like Colin Quinn and Jay Leno, have important cameos in the film as well.) But the movie lacks the web series’ gated-community tone, for which we can thank Charles, and his decision to include a second subject, Orny Adams.

Comedian is shot on handheld digital cameras in the dark confines of small comedy clubs, but even in this unromantic setting, post-Seinfeld Seinfeld is too big a star to qualify as the universal subject in the title. He claims he approaches comedy with the work ethic of a construction worker, but no construction worker has ever sent crowds leaping to their feet in gratitude just by showing up. When Seinfeld arrives at a club on a busy Saturday, he has no problem getting a spot to perform. Once he fine-tunes his act, he heads right for Letterman’s show. But Adams has no such gravitas. When the film introduces him at Caroline’s, he’s 29 years old, with years of experience and binders full of jokes, but none of the material success or industry approval he longs for. He’s desperate for representation by George Shapiro, Seinfeld’s legendary agent. Once he gets that, he’s desperate for a showcase at the Montreal Comedy Festival. Once he gets that, he’s happy for “about four minutes,” then it’s back to self-hatred and self-doubt, which his blinding egomania can barely mask.

The soul-deflating nature of stand-up comedy is a staple of podcasts, many of which double as de facto therapy sessions. Even Seinfeld, the most financially successful stand-up of all time, tells a friend in Comedian, “No matter how big you get, it’s shit” to subject yourself to a new audience; it’s only “compulsion to get onstage” that pushes a person into this “insane” line of work. Seinfeld bursts in to agreeing laughter when Quinn tells him he’ll know he’s back to being a pure stand-up when he’s onstage, killing, “and you’re still miserable. ‘Great, I’m making these idiots laugh.’”

This is all faintly ridiculous to hear from a guy with Seinfeld’s net worth. He’s more naturally empathetic at the movie’s end, when he visits Bill Cosby backstage before a gig, and positively genuflects before the master. Like Seinfeld, Cosby doesn’t have any great need to keep proving himself before live audiences. But he goes on the road out of professional obligation: “You could go into any bar, you could be 70 years old, and stand beside Bill Russell, Muhammad Ali, Willie Mays,” Cosby tells Seinfeld, while Charles shoots him in a reverent Hitchcock-like profile. “And when those guys are saying, ‘You know, I played the shit out of my game,’ you can say, ‘Yeah, I knocked the shit out of it too…’ It’s one of the great moments of being a performer when you can say, ‘I took what I had, and I knocked it out of the park.’” 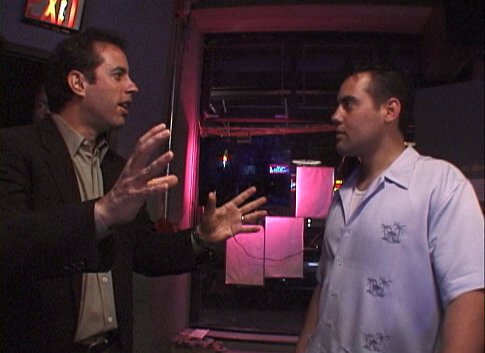 The Orny Adams sections of Comedian are filled with the anxiety of someone who hasn’t yet earned the right to think that way. Adams is upfront about what he wants out of a career, and notably, it has nothing to do with the craft of joke-writing or performance—he wants to sit in a diner and have everyone whispering about him. Essentially, he wants to live in a permanent episode of Comedians In Cars Getting Coffee. Unlike Seinfeld, who spends the entire film fretting about whether he has enough good material to do his own feature spot, Adams knows he’s got jokes. “It’s inconceivable that I have a bad set at this point in my career,” he tells Charles while preparing for Montreal. What he wants is validation, domination, an irrefutable response to those people in his family or personal life who say he’s chosen an absurd career. “You got something else you’d rather be doing?” Seinfeld chides him early in the movie. Easy for him to say, you might think, and you’d be right. But so is Seinfeld.

Leaving his meeting with Cosby, Seinfeld muses in the car, “I’ve already done something. He reminded me of that. And now I just want to do what I love to do.” Judging from the last dozen years, Bee Movie and The Marriage Ref notwithstanding, Seinfeld’s greatest love appears to be ruminating on comedy rather than performing it. That’s the apparent impulse behind jawing with Chris Rock, Ricky Gervais, and Louis C.K. in Talking Funny, telling The New York Times how to write a joke, or taking his friends out for lunch on Acura’s dime. It’s been a while since Seinfeld has appeared hungry on camera, literally or figuratively. He may never appear that way again. All the more reason to watch the beguiling little film that kicked off Phase II of his career—and like his sitcom, set the tone for much of mainstream comedy that followed.