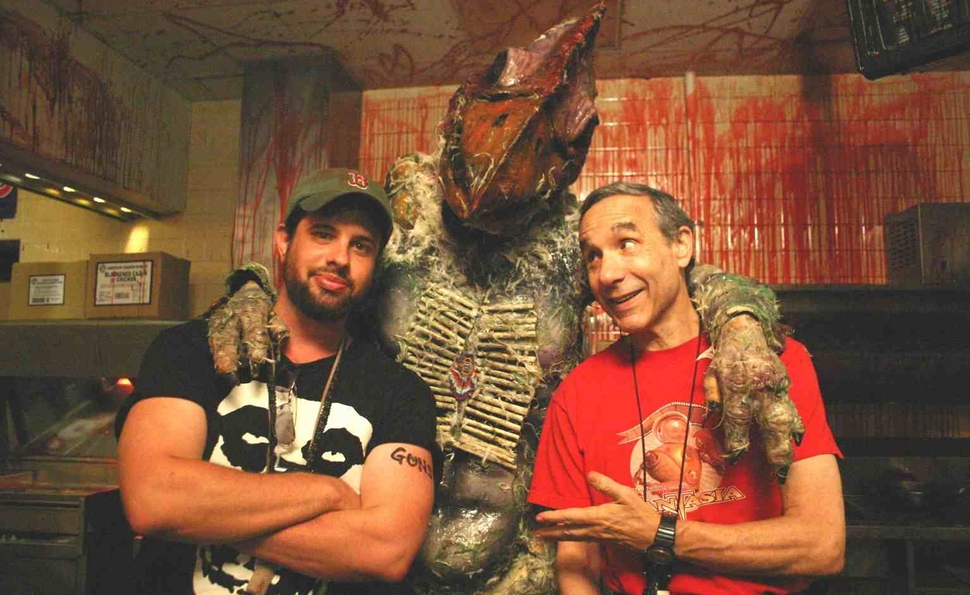 For most of its four-decade existence, Troma Entertainment has thrived less as a low-rent film-production and distribution company than as an irresistible idea: the craziest, wildest, most fearlessly transgressive and tacky Z-movie studio imaginable. The peculiar genius of Troma co-founder and tireless spokesperson Lloyd Kaufman lies not in filmmaking or storytelling, but in branding and marketing. Kaufman has succeeded in positioning Troma as the raging, anarchic id of independent cinema, the drooling creature under the stairs that civilized society and the major studios would prefer to forget. He’s branded the company as the most punk rock of trash-movie institutions by playing the press with a shamelessness and bravado that would make Malcolm McLaren proud.

Kaufman has developed a cult of personality that makes him and Troma bigger than the tacky little B-movies they put out, cult oddities with titles like The Toxic Avenger, Class Of Nuke ’Em High, Surf Nazis Must Die, Ferocious Female Freedom Fighters, and Blood Sucking Freaks. In proudly disreputable B-movie tradition, Troma films can be sold on their colorful titles alone, which are so descriptive that they make actually seeing the film redundant. It’s enough to merely know that films like Redneck Zombies exist and make the cinematic world a weirder, kookier, more colorful place. If anything, it might be easier to be a Troma fan and not see its films. In theory, Troma is fantastic; in actuality, its films tend to be endurance tests.

Troma is obsessed with boobs, blood, gore, and shock. But more than anything, Troma is obsessed with Troma: its history, its kooky cast of characters, its smart-ass aesthetic, and, above all, Kaufman himself. In that respect, the behind-the-scenes documentaries on Troma productions that can be found on the company’s YouTube channel simultaneously represent the ultimate exemplar of the company’s “We’re the real show here” aesthetic and a denunciation of Troma’s communal, countercultural, “All in it together” sensibility.

Apocalypse Soon: The Making Of Citizen Toxie, the 137-minute 2002 documentary on the making of 2000’s Citizen Toxie: The Toxic Avenger IV, and 2008’s Poultry In Motion: Truth Is Stranger Than Chicken, about the making of Poultrygeist: Night Of The Chicken Dead, are not conventional promotional documentaries. They’re more like acts of revenge that make Troma look like a nightmarish organization where resentful worker bees push themselves past the point of exhaustion under dangerous working environments, all for the sake of a rich old man who flies the flag for cinematic democracy while enjoying a life of privilege unimaginable to his overworked, underpaid employees. In the key line from Apocalypse Soon, one of the many wrung-out, exhausted crew members working on Toxie wearily quips, “I have nothing but love for Troma, that love you have for your alcoholic, abusive grandfather.”

A deep appreciation for gallows humor, self-deprecation, and dark comedy is essential in surviving a Troma production, as is masochism and a superhuman tolerance for subhuman working conditions.

Apocalypse Soon favorably recalls American Movie—think of it as Tromerican Movie—in its gonzo exploration of filmmaking at the fringes. At one point in the production, David Mattey, the affable, towering Caucasian actor who plays Toxie, cannot be located, so a black man a foot shorter than Mattey is given a Toxic Avenger mask from 1989’s The Toxic Avenger Part II. The moment recalls the infamous incident where Ace Frehley was so obnoxious on the set of Kiss Meets The Phantom Of The Park that he was replaced by his black stunt double.

In Apocalypse Soon, Kaufman is bedeviled by a cavalcade of incompetence, while never acknowledging that the lack of professionalism plaguing the production begins at the top. Kaufman doesn’t seem to realize that if his crew doesn’t know what they’re doing, that might be because he failed to train them adequately and expects them to intuit his needs and act on them without him having to verbalize them. The documentary gets an additional comic charge from dispirited workers like Troma fixture Trent Haaga, who acts in the film and assistant-directs, discussing his deep ambivalence toward Kaufman while costumed in a baby bonnet and bloody diaper as a member of the film’s “Diaper Mafia.” (Similarly, Poultry In Motion contains the accidentally brilliant sight gag of Kaufman attempting to direct the film while wearing a giant chicken costume.)

There are moments throughout Apocalypse Soon where the bitterness of the people involved in Citizen Toxie is so pure and vitriolic that it cannot be transformed into humor, even of the pitch-black variety. Early in the film, a bit player professionally known as Bella Compagna, who plays “Diaper Mafia Temptress (With Beautiful Breasts)”—a role that mostly consists of assaulting people with her enormous  chest—complains, “This is almost like the pornos that I’ve done, which is mostly girl-girl and fetish and S&M stuff.” She elaborates: pornography paid better, and was less physically taxing. For Compagna, there is no joy or romance in helping realize Kaufman’s vision, just an unfortunate step down, financially and professionally, from porno. It’s just a job, and a memorably awful one at that. (The documentaries are particularly scathing in their depiction of Troma’s treatment of women. Early in Poultry In Motion, one of the crew members says, with palpable concern, “One of our lead actresses looks like she wants to kill herself between takes, and we’re a little worried about her.” When one of the documentary’s directors asks about Kaufman’s response, the crew member responds, “Lloyd doesn’t notice. All Lloyd sees are 10 pairs of tits around him now.”)

Apocalypse Soon is populated by people immune to Kaufman’s charm and the grimy romance of Troma’s “Let’s put on a show!” underdog spirit. Over the course of the film, Citizen Toxie aggressively sheds crew members, who quit en masse when they aren’t being fired in a fit of rage, then rehired in a fit of contrition. Citizen Toxie producer/co-writer Patrick Cassidy captures the grueling, Bataan Death March quality of a Troma production when he says of the foot soldiers for independent film around him, “Trent [Haaga] and I will survive. Everyone else will go down in flames.” At the end of Apocalypse Soon, Cassidy, one of the weary survivors of the shoot, attempts to sound lofty and high-minded about the experience, with an unconvincing, “That’s what the beauty of Troma is: dedicated individuals doing hard work for a good cause, just to make art.” Then he adds, more truthfully, “…to make Lloyd rich.”

Apocalypse Soon chronicles a production that went spectacularly awry due to lack of preparation, lack of resources, vicious in-fighting, and widespread incompetence, while Poultry In Motion documents a production doomed from the outset, a film whose blueprint was so fatally, transparently flawed that it’s astonishing no one died during its production.

With Poultrygeist, Kaufman pushed fans’ devotion and his own cheapness to brutal extremes. The film seemed to represent an endgame for Kaufman, as he invited amateurs from all over the world to travel to upstate New York at their own expense so they could work on a Troma movie for no money. Poultry In Motion opens with a disclaimer that the actors and crew-people recruited for Poultrygeist were warned that life would be hard and there would be no money, but even that is sugarcoating the situation. It would be more accurate to say that they would be worked to the point of insanity under conditions seemingly designed to break their spirits. During the making of Poultrygeist, more than 70 crew members all slept in the same abandoned church in the heart of a Buffalo ghetto while sharing a single bathroom. Poultry In Motion consequently doubles as a fascinating, darkly funny glimpse into the underbelly of genre filmmaking and a convincing argument that Kaufman should spend the rest of his life in jail for violating labor laws, despite his oft-stated liberal beliefs.

Lemmy’s nightmare voyage to Tromaville was at least short-lived. Crewmembers who survived the entire shoot might have left it with some useful hands-on knowledge about low-budget genre filmmaking, but were more likely to come away with a case of post-traumatic stress disorder and enduring resentment toward Kaufman.

Gabriel Friedman, a longtime Troma editor and the director of Apocalypse Soon, is credited as director alongside Kaufman on 2002’s All The Love You Cannes, a low-budget look at Troma’s trip to the French film festival to peddle its wares. It’s packaged as a scruffy, bare-bones guide for independent studios on how to make a big impact with little money, but like most Troma product, it’s primarily devoted to spreading the gospel of Lloyd Kaufman.

Where Apocalypse Soon and Poultry In Motion reveal the dark, disturbing id behind Kaufman’s carefully cultivated shtick, All The Love You Cannes finds Kaufman firmly in salesman mode as he and his wacky gang of oddballs, misfits, and no-goodniks run amok at Cannes, playing eyebrow-waggling Groucho Marx to an entire continent of easily offended Margaret Dumonts. The film feels disingenuous and dishonest in light of Apocalypse Soon and Poultry In Motion: It’s impossible to be invested in the grandeur of the Wizard Of Oz after peering behind the curtain. Cannes sells the goofy adolescent fantasy of Troma as the bawdiest playpen in independent film, but the truth is darker, more complicated, and also, not coincidentally, more entertaining.

One of the many perplexing elements of these glimpses behind the scenes at Lloyd Kaufman’s dream factory is that they’re official Troma productions, presented by Lloyd Kaufman and his seldom-seen producing partner, Michael Herz. To his credit and his detriment, Kaufman has repeatedly released documentaries that made him look like an incompetent, delusional, narcissistic buffoon. Kaufman didn’t just allow his employees to turn a camera on him when he was at his worst—he released the results as DVD extras and put them on YouTube, signing off on scathing documentaries that could just as easily have been titled Fuck You Lloyd Kaufman, You Greedy, Demanding, Obnoxious Prick.

Did Kaufman do so out of an admirable desire to reveal the warts-and-all reality of guerrilla-style independent filmmaking, even though it reflects terribly on him? Or is he so narcissistic that he just wants to be in front of the cameras, no matter the context? Regardless of the answer, Apocalypse Soon and Poultry In Motion are among the best, funniest, and most subversive movies Troma has ever released. The films alchemize documentary goodness out of what appears to be a bad experience for almost everyone involved, even as they make the films they’re ostensibly promoting look unwatchable. It confirms that, like so much in pop culture, what looks like goofy fun from the outside is often dark, complicated, and dysfunctional underneath.