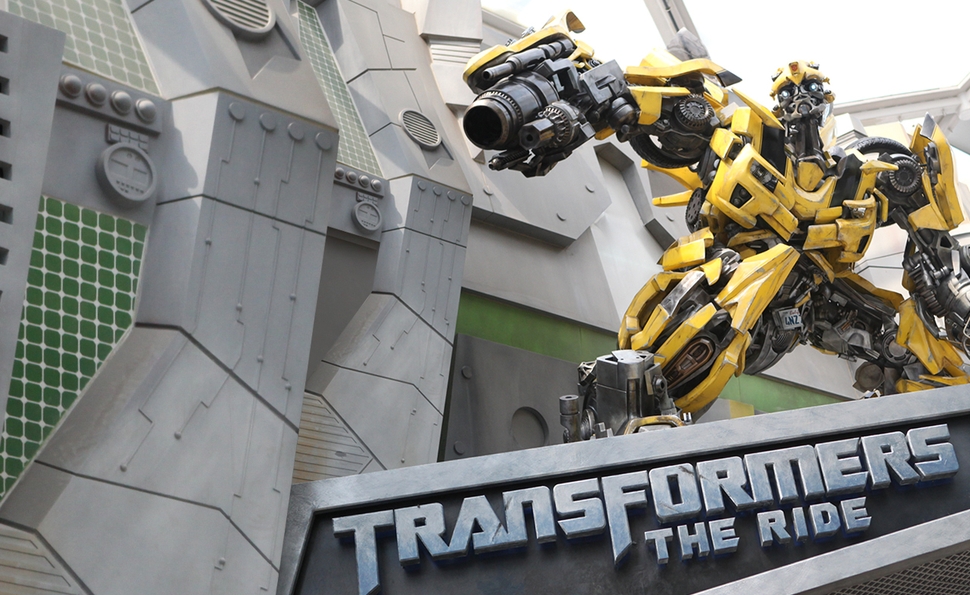 “I should like to address my next remarks to those of you who are watching the show in the year 2000. Please write in at once and tell us what life is like. I'm quite curious.”

Alfred Hitchcock uttered those words for the first time on April 6, 1958, during an episode of the television series Alfred Hitchcock Presents. More than 30 years later, the clip of Hitchcock speaking to the people of the future found its way into an amusement park, where it was part of an installation titled Alfred Hitchcock: The Art Of Making Movies that also featured a highlight reel of Hitch’s best work, a 3-D movie, and a stage show that revealed some of the secrets behind the production of the famous shower scene from Psycho.

The Art of Making Movies was one of the original attractions at Universal Studios Florida when the park first opened its doors to the public in June 1990. Orlando visitors could still make good on Hitchcock’s prophetic remarks in the year 2000—but not for long. In 2003, the exhibit was permanently closed and replaced by a 3-D movie featuring the stars of the popular animated franchise Shrek. Talk about portentous: Universal ditched “the art of making movies” in favor of a film whose IMDb plot keywords include “exploding bird,” “flatulence,” and “hit in the crotch.”

Dismantling Hitchcock in favor of Mike Myers was very much a sign of the times—for Universal Studios Florida and for all of Hollywood. In fact, if you want to observe the changes that have swept through mainstream American filmmaking in the last quarter century—from analog to digital, from storytelling to salesmanship, toward spectacle and youth and away from mature subjects and audiences—one of the best places to do it is at Universal, where each shift in the wider industry has been replicated with a corresponding shift in the park's attractions.

Universal’s Orlando outpost was originally designed to mimic the company's Hollywood studio, which is both a working production facility and a tourist attraction. The first iteration of Universal Studios Florida included standing sets from film and television shows like Psycho IV: The Beginning and Swamp Thing and a backlot tram tour. Guests could sit in the audience of a game show at Nickelodeon Studios, or watch as crews filmed on location in the park—this Universal map from 1992 even includes a guide to proper etiquette for visitors who happen upon a production. (“Filming must take priority. So when you encounter one of our film crews, watch as long as you like, but please be as quiet as possible.”)

Vintage Universal Orlando put a real emphasis on practicality: It was about the business and technique of making movies as well as the art. The park had its share of thrill rides, but most attractions emphasized education as well as entertainment, like Earthquake: The Big One, based on the famous 1974 disaster movie. The ride’s big finale was a trip through a quaking subway station, but the lengthy pre-show, hosted by Earthquake star Charlton Heston, was about how filmmakers achieved the movie’s landmark effects using miniatures and high-speed photography.

The presentations were often light on facts and heavy on flash and lowbrow humor, but there was real substance in places. At The Art of Making Movies, Universal employees guided viewers through re-creations of iconic scenes from Saboteur, Strangers On A Train, and Vertigo. The Murder, She Wrote Mystery Theatre took guests through multiple steps of the post-production process, including editing, foley effects, and additional dialogue recording. The acting was certainly cheesy, but watch this video and consider this question: How many other theme park attractions include effective demonstrations of the Kuleshov Effect?

All of those rides are long gone. Just three of Universal Studios Florida’s non-stage-show attractions circa 2013 date to the early 1990s: E.T. Adventure, Lucy: A Tribute, and Universal’s Horror Make-Up Show. (In contrast, Disney’s Magic Kingdom still maintains more than a dozen of its original rides from 1971, including the Haunted Mansion, Peter Pan’s Flight, and the Mad Tea Party.) The sets for Swamp Thing and Psycho IV were both demolished. The production tour ended along with most production at the studio—including at Nickelodeon Studios, which was shuttered in 2005. Meanwhile, all the recent additions to the park follow a common theme: roller coasters (Hollywood Rip Ride Rockit, Revenge Of The Mummy) or simulator rides that mimic the sensation of being on a roller coaster (The Simpsons Ride, Despicable Me: Minion Mayhem).

In another conspicuous shift, the site of the Murder, She Wrote stage is now the new home of Transformers: The Ride. In this $100 million attraction, 12 guests wearing 3-D glasses sit inside a vehicle that moves through an environment littered with giant movie screens, creating the illusion that riders are joining the Transformers on a quest to rescue an important artifact. The experience is technically impressive, visually dynamic, and totally incoherent. Transformers: The Ride, based on the ongoing movie series by Michael Bay, imparts no knowledge about filmmaking, life, or any other subject whatsoever. In that sense, it might be the most faithful adaptation of a movie at Universal Studios Florida.

A lot of these changes might seem regrettable, but they were also kind of necessary. Old-school Universal was built to exploit a version of Hollywood that no longer exists, one that produced movies with practical animatronic effects that could be replicated on rides like Jaws, along with elaborate sets and props for tourists to snap pictures of. DVD and Blu-ray special features removed the mystery and allure of behind-the-scenes anecdotes; smartphones and laptops put the tools of moviemaking in the hands of millions of Americans. Why spend thousands of dollars to travel to Florida to watch and do things you can watch and do at home?

You wouldn’t. So it was perfectly logical (if a bit disappointing) for Universal to move away from information and toward immersion. Instead of mimicking the experience of being inside a working production studio, Universal now focuses entirely on mimicking the experience of being inside the movies themselves. The most popular attraction at Universal’s sister park, Islands of Adventure, is The Wizarding World of Harry Potter, whose main attraction approximates the experience of flying on a broom around Hogwarts. Outside, guests can walk through an impressively convincing mock-up of Hogsmeade, pose in front of the Hogwarts Express train, and purchase an assortment of Harry Potter memorabilia and snacks, from Every-Flavour Beans to butterbeer. At Ollivanders Wand Shop, an actor selects one guest to re-create this scene from Harry Potter And The Sorcerer’s Stone in precise detail—down to the descriptions of the wands, the messy stacking of the boxes, the magical mishaps, and the heavenly light and swelling music when the correct wand (retail price: $30 and up) is found. Muggles don’t learn much about how Warner Bros. made the Harry Potter franchise. But they can pretend for a little while that they’re a part of it.

In her new book, Sleepless In Hollywood: Tales From The New Abnormal In The Movie Business, movie producer Lynda Obst tells a story about discussing the surprisingly large opening of Bridesmaids with a market-research expert. “The studios are in the branded carnival business,” he tells her. “Their job is to make amusement park rides.” Last week at Esquire.com, Stephen Marche dubbed this phenomenon “the rise of the moviecoaster.”

“There is little if any connection between a film like Jaws, or Top Gun, or even Iron Man or Spider-Man, and a film like Pacific Rim. Those films, for one thing, had characters, whose journeys were at the center of the experience of watching the film. Pacific Rim has no characters. It has no plot in the sense that Spielberg would have understood it, as in a person who goes through a struggle, against an antagonist, and emerges victorious but changed. Instead, Pacific Rim has something akin to an iPhone interface—perfectly smooth, perfectly inhuman, and perfectly efficient. Alien monsters called Kaijus have emerged from the bottom of the Pacific Ocean, and the humans fight against them using enormous robots called Jaegers. There’s also some nonsense about mind-melds. The story guides the viewer with as little discomfort as possible between grandiose, over-the-top action sequences. Then it ends. Or doesn’t really end, because there’s no real arc. Stops. And then you go home.”

As the movies have gotten more like amusement park rides, the amusement park rides at Universal have gotten more like the movies—more digital, more dumb, more intent on delivering pure visceral thrills and nothing else. The park may have moved away from the concept of a miniature movie studio, but it remains a perfect microcosm of modern Hollywood, where family-friendly 3-D escapism and the potential for merchandise sales are the only things that matter. In early 2012, Universal closed the long-running Jaws ride; in its place, it’s constructing a sister Harry Potter area to the one at Islands of Adventure. Expect more butterbeer, more wand shops, more immersion, and less information. And whatever you do, don’t tell Alfred Hitchcock.