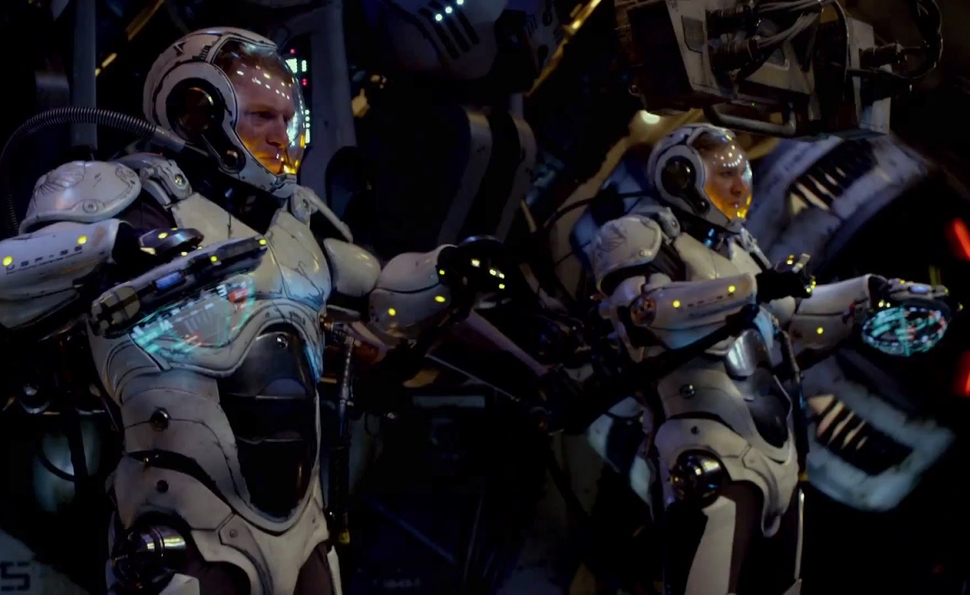 In 2011, Variety’s Justin Chang greeted the 10th anniversary of the September 11, 2001 attacks on New York and Washington D.C. by dissecting the event’s impact on American film, in a column with a bold, broad central statement: “Any contemporary film offering up a scenario of mass annihilation is, like it or not, a 9/11 movie.” Many other critics have since taken up the refrain, which echoes again with each new batch of disaster-centric blockbusters: As CGI makes spectacle simpler, the argument goes, action-blockbuster directors feel pressure to ramp up the destruction. And they keep drawing on familiar 9/11 iconography, in a drive for visual realism, to mine the event’s emotional impact, or both.

The 2013 summer action slate has been so blatant about channeling 9/11 imagery that it’s evoked a fresh round of critical protest, starting with Kyle Buchanan’s Vulture essay “Is It Possible To Make A Hollywood Blockbuster Without Evoking 9/11?” In accordance with Betteridge’s Law Of Headlines, Buchanan’s answer to his rhetorical question seems to be “no”: He cites as evidence the way films like Star Trek: Into Darkness, World War Z, and especially Man Of Steel consciously, deliberately evoke 9/11 in their treatment of large-scale urban disaster. “It’s lazy, it’s cheap, it’s deadening, and it needs to stop,” he says.

Guillermo Del Toro’s new Pacific Rim may not cool his ire, or that of Atlantic Wire critic Richard Lawson (“The Mega-Death of Summer Movies”), or Peter Debruge, who recently joined Chang in a dialogue on the subject for Variety. (“Does ‘Man Of Steel’ Exploit Disasters Like 9/11?”) Pacific Rim is yet another big action movie full of devastated cities, what Buchanan calls “gratuitous building-battering” with “a coldly pornographic attention to detail,” and Chang calls “annihilation porn.” Its central focus is on mega-scale fights between gigantic monsters, nicknamed “kaiju” after Japanese monster-movie adversaries, and immense pilot-controlled robots called Jaegers, which an international coalition builds to hold off the kaiju. The battles between them are as violent—and as focused on blockbuster-friendly, eye-popping destruction—as anything else in this year’s summer lineup.

But Pacific Rim does offer a different, more positive answer to Buchanan’s question. It’s impossible to make an explosive Hollywood blockbuster without making a single audience member think of 9/11; for most Americans, the sight of tumbling buildings and urban wreckage will have personal mental associations for at least another generation. But writer-director Del Toro and his co-writer and story originator Travis Beacham do prove it’s possible to make a thrilling film about mega-scale violence without mining 9/11 for cheap pathos. In particular, they make a handful of choices that other filmmakers have been missing:

Pacific Rim makes the problem global. So much of that “annihilation porn” comes from an “America vs. the outsider” perspective, and focuses on the destruction of American cities: New York in The Avengers and the NYC stand-in Metropolis in Man Of Steel; Chicago in Transformers: Dark Of The Moon; San Francisco in Star Trek: Into Darkness; Washington, D.C. in White House Down, and so forth. World War Z does hop around the globe, but it kicks off the action with a zombie outbreak destroying Philadelphia, and the rest of the film focuses solely on an American trying to find a cure to the plague so he can get back to his family, as if worldwide catastrophe is just an inconvenience on par with mandatory overtime at the office. Even though only one of these films features anti-American terrorists as adversaries, and the rest are about threats that dwarf national lines—space aliens, a race of genetically engineered supermen, and a monster-spawning disease—they still tend to portray the conflicts as American problems, either because they’re on American soil, or because they’re up to Americans to fix. 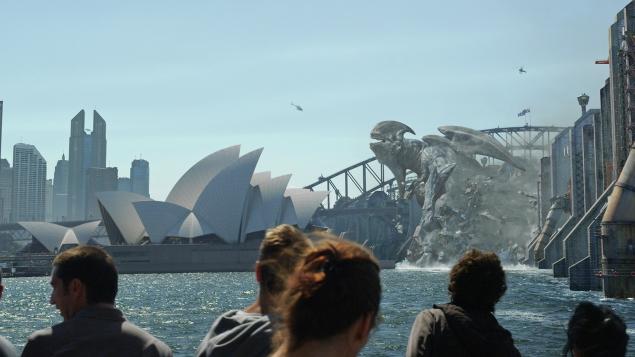 In Pacific Rim, the “us” in “us vs. them” is overtly all of humanity. The film opens with brief footage of a kaiju attacking San Francisco’s Golden Gate Bridge, but the attacks immediately spread, and the narration emphasizes that every coastal city around the world is a potential target. Just relocating the significant onscreen attacks to Australia, Tokyo, and Hong Kong guarantees that the images look less like 9/11 footage, because the surrounding scenery isn’t the usual American metropolis. And posing the enemy as an international threat requiring a unified international response lessens the sense of personal or political persecution, and national victimhood needing redress. Speaking of which…

It at least tries to be about something besides vengeance or punishment. One of Buchanan’s objections to the post-9/11 outlook of blockbuster movies is the revenge scenario: As he puts it, “Action heroes used to prevent disasters, but now, they can only avenge them.” This isn’t exactly true; the heroes of Man Of Steel, World War Z, Star Trek: Into Darkness, The Avengers, and the like each fail to prevent large-scale destruction, but they’re all fighting to save lives and prevent bigger calamities. It is true, however, that many of today’s blockbusters focus on 9/11-inspired catharsis stories about protagonists who suffer through previously unimaginable destruction, pick themselves up, and track and destroy the people responsible for their loss. Pacific Rim could easily have fallen into the same boat—it highlights several extremely personal losses, and focuses on their impact on the Jaeger pilots—but del Toro and Beacham’s script emphasize that the Jaeger program is about protecting the future, not avenging the past.

In particular, would-be Jaeger pilot Mako Mori (Rinko Kikuchi) wants to be part of the program specifically to avenge her family, but her mentor tells her that a thirst for revenge is too destabilizing and dangerous for pilots, and it eliminates the necessary concentration. “Vengeance is like an open wound,” he says, and when she tries to shrug him off, events prove his point: Her focus on her personal trauma is crippling and dangerous, and she can’t operate until she lets it go and concentrates on the battles of the present. In a summer-movie landscape of lone wolves fighting personal battles of bloody retribution, Pacific Rim keeps emphasizing that its fights are for survival and to forge a livable future, not to pursue vendettas.

It finds its iconography further in the past. Not all post-9/11 disaster films have mined the familiar footage of the attacks for shallow or mercenary reasons. Filmmakers can’t draw on real-world references for how aliens should look, or how giant robots that turn into planes or trucks should move. But in the 9/11 footage, they have extensive real-world data on how dust and debris billow out of a collapsing building, or how terrified bystanders move away from a disaster. And they’ve drawn on those images in part because they look real to viewers who’ve seen the same footage. There’s a language of disaster cinema these days, as Buchanan notes: Over and over, from Cloverfield to Man Of Steel, audiences have relived 9/11 with shots of dust clouds chasing people down the canyons between skyscrapers, streets full of shattered glass, ash-smeared survivors staggering dazed through the wreckage, and first responders herding the public away from danger zones, or helping them out from under piles of shattered concrete and bent girders.

Del Toro and Beacham look further into the past for their visual references. Their inspirations are Japanese live-action monster movies of the 1950s through the 1970s, and the anime that recalls them. Half their Jaeger-vs.-kaiju battles take place at sea, without cityscapes to smash or ash-dusted victims underfoot, and with the combatants wading in the ocean as if it were a puddle, as the original kaiju often did. When they do battle in the cities, the sequences are highly stylized and dreamlike, or focused on images no one saw on 9/11, like a collection of refugees huddled in a bomb shelter, listening to the combat above. That moment in particular feels more like something from a 1950s war movie than a modern disaster picture.

It acknowledges the weight of tragedy, and doesn’t take mass death and destruction lightly. Critics’ primary objection to Star Trek: Into Darkness—and my personal biggest gripe about World War Z—was that the films don’t take any time to feel the emotional impact of the devastation they put onscreen. Entire cities collapse for shock value and titillation, but the impact on characters is minimal and brief, and then they’re on to the next scene. Pacific Rim dwells more firmly in its characters’ emotions, and tries to find the ethical balance between characters who feel the weight of loss, and characters driven solely by that loss. It devotes significant time to its protagonist’s biggest trauma and how it affected him, but instead of shrugging it off to get to the next fight, it moves forward significantly in time to the point where he can use his experience to help someone else who’s similarly grieving.

The film does suffer from blockbuster destruction inflation, and from the bloodless carnage that bothers Lawson and Chang in particular. Its collapsing buildings, like Man Of Steel’s Metropolis, are weirdly empty of people, making them feel more artificial and toylike. But at least it explains this better than Man Of Steel does, with an early-warning system that allows for plenty of time to evacuate kaiju-attack sites. And at least it directly addresses what damage on this scale would do to humanity’s self-image and psyche. It isn’t subtle or nuanced about shared global trauma, but it explores it with empathy and reflection, as carefully as this kind of movie can. It encourages its characters to take in the enormity of the damage done, then move on, but without discarding their experiences.

Pacific Rim isn’t a panacea to critics’ concerns about the deadening effect of all this imaginary violence. Its human characters still aren’t realized with anything like the depth, attention, or detail of its monsters and robots. Its solutions to the 9/11 portrayal problem—channel the past, discuss the future—aren’t necessarily a working model for other movies, and those solutions are still more rooted in escapism and cinephilia than in grappling with the potential cost of real disasters. It still takes a toddler’s glee in building things up solely to knock them down in dramatic fashion. Part of the complaints Chang, Buchanan, and Lawson registered have nothing to do with 9/11 imagery, and everything to do with whether it’s seemly for filmmakers to serve up an increasingly lurid and meaningless banquet of play-destruction in a world where such destruction has actually happened—or whether it’s ethical for audiences to enjoy the spectacle of carnage without consequence.

But while Pacific Rim handles some of these issues clumsily, it does handle them consciously, which is a solid first step. It’s less grim and ghoulish about its violence than Man Of Steel, and more responsible and meaningful than Into Darkness or World War Z, all without losing its sense of fun. Lawson’s piece puts the question this way: “What does anything mean when everything can so quickly and easily be destroyed? Pretty soon it won’t be enough to wreck one town or city; the villain will have to blow up the whole world. And then where will we be?”

In Pacific Rim, the villains do effectively blow up the world, or at least many select chunks of it. And where we are is standing in the wreckage, but finding hope and an approximation of a healthy way forward. Maybe we can find a healthier way forward for post-9/11 blockbuster movies as well.