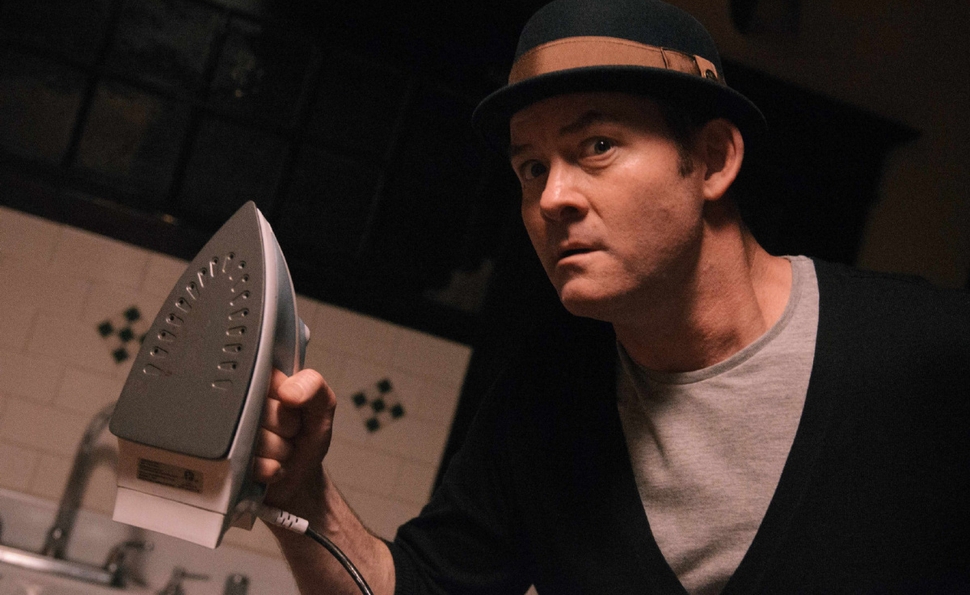 After a stint with Chicago’s famous Second City comedy troupe and a one-season run on Saturday Night Live, David Koechner quickly became one of Hollywood’s busiest comedic character actors. Though best known for his collaborations with former SNL castmate Will Ferrell, including Talladega Nights and two Anchorman films, he’s also made memorable contributions to more than two dozen other films over the last decade, including The Goods, Piranha 3DD, and Snakes On A Plane.

With a résumé like that, Koechner seems like someone who should be recommending a broad comedy or exploitation film for Compulsory Viewing. Instead, he picked Man Bites Dog, the prescient, pitch-black satire of documentary ethics and celebrity culture by Belgian filmmakers Rémy Belvaux, André Bonzel, and Benoît Poelvoorde. The film, a highly controversial selection of the 1992 Cannes Film Festival, follows a documentary film crew as they record—and grow ethically compromised by their involvement in—the vicious exploits of a remorseless serial killer named Ben (Poelvoorde).

Koechner’s unusual choice makes for an interesting thematic pairing with his new movie, Cheap Thrills, a darkly comedic thriller about a pair of old friends (Pat Healy and Ethan Embry) who meet by chance in a bar and are drawn into an increasingly degrading, dangerous series of dares by a wealthy couple (Koechner and Sara Paxton). Koechner told The Dissolve why he loves Man Bites Dog, and how he would remake the film if given the chance:

The Dissolve: When did you first see Man Bites Dog?

Koechner: What year did it come out?

Koechner: I must have seen it around then, maybe ’92, ’93. I remember watching it twice. I watched it the first time, and it’s so shocking, and a bit horrifying, that you can’t believe it, but you’re still kind of laughing. And then I watched it again soon after that, and I laughed my ass off! I thought it was one of the funniest things I’d ever seen! It’s so dark and sinister, but my God, it’s hilarious. And its social commentary is beautiful. It really is amazing. It’s probably more relevant now than it was then, because none of these reality shows were happening.

The Dissolve: It’s definitely ahead of its time in that way.

Koechner: It truly is.

The Dissolve: If you go back and look at some of the reactions from that time, although it was admired and won awards at Cannes, a lot of people said it seemed a little outrageous, because no one would let themselves be filmed doing these things. Now it seems much more believable.

Koechner: Yeah. I kind of wanted to remake that film [and] do an American version of it. That’s the other remarkable thing: You’re reading subtitles the whole time! Ben is so charming. He’s so effervescent, it’s alarming. He keeps saying “Come along, come along…” It’s been a long time since I’ve seen it, but it certainly made an impression. 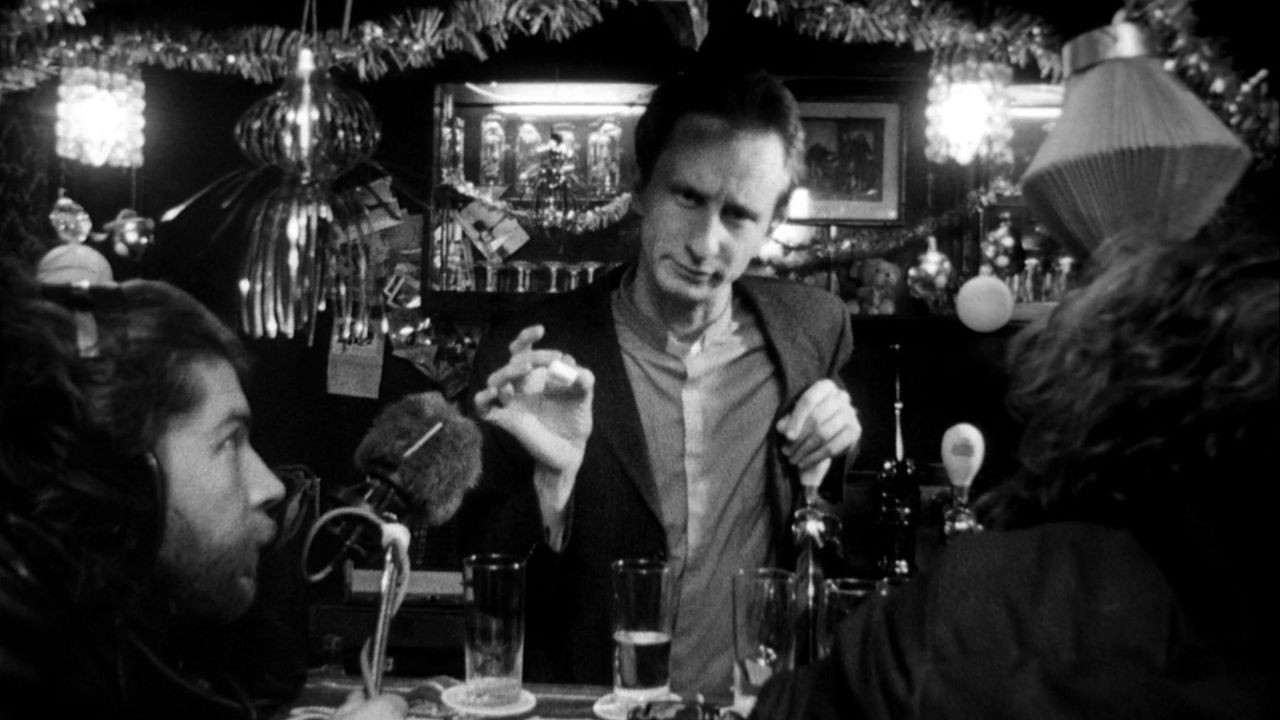 The Dissolve: How many times would you say you’ve watched it total?

Koechner: I think I’ve only seen it a total of three times. I watched it when it came out, then shortly thereafter, and then, I don’t know, maybe within the last 10 years.

The Dissolve: But it stuck with you.

The Dissolve: You mentioned it in another interview as well—you said you’d never seen a funnier, darker movie. Does that still hold true?

Koechner: I would say so. Yes, it’s probably the darkest comedy I’ve ever seen.

The Dissolve: Do you generally like that kind of comedy? You’ve done some films where it seems like sometimes you’re trying to bring—

Koechner: Some darkness? Sure. I don’t know if it’s intentional, or if it’s just part of my makeup. I really enjoy awkward, cringe-inducing humor, where you really pull someone in and go, “No, no, no—we’re gonna really witness some truth here. Come on. Stay with me. Because at the end of it, I’m going to let you off with a laugh.” That roller coaster of, “Whoa, where are we going?” and then, “Okay, it’s fine.”

The Dissolve: Similarly, you mentioned Ben beckoning the audience to come with him. That’s such a big part of his character. He keeps telling the camera, “Come on, you want to see this.”

Koechner: Yeah. “Come down this path with me.” There’s no question about that. Ben is a sinister seducer.

The Dissolve: Did you use Benoît Poelvoorde’s performance as Ben as an inspiration for your character in Cheap Thrills?

Koechner: Maybe, but it wasn’t a conscious choice. The script was enough. And I’d had several conversations with [director] Evan [Katz] before we began filming, and then obviously all the signposts in the script already help you make those choices as an actor. Before scenes, Evan and I would have just short little conversations—reminders like, “Remember, here’s what’s going on in this scene. This is what’s happening with Colin right now.” You know, because it’s got to be this slow seduction, right? You can’t go out and, “Hey! Here’s what I really want to get you to do.” It has to feel natural, like, “Ah, let’s go a little further. Ah, let’s kick it.”

The Dissolve: Are you a fan of fake documentaries in general?

Koechner: I have been a big fan of Christopher Guest and mockumentaries. They’re not all great; it’s a tough thing to pull off, because you can’t wink too hard. But yeah, the good ones.

The Dissolve: The impressive thing about Man Bites Dog as a fake documentary is that it doesn’t cheat. Many mockumentaries do; all of a sudden there are multiple camera angles that would be impossible in a real doc. There’s no sneaking around in Man Bites Dog, and there’s no cheating; there’s just one camera.

Koechner: I think that probably pulls you in even more. Plus, it’s so fucking funny that the sound guy keeps getting killed. [Laughs.] I don’t want to put any spoilers here for your audience, but you really should see this film. And it just gets funnier! The crew continues! You gotta wonder, why are they staying with it?

The Dissolve: Ben kills people in front of the film crew, and they do nothing to stop it; they are completely complicit in the whole thing. And yet when someone they know gets killed, then they get upset, and even cry.

Koechner: And Ben feels bad for them, too, and he’s consoling them. It’s ridiculous!

The Dissolve: Is that something about human nature? Horrible things happen every day, but they don’t affect us emotionally until there’s some kind of direct impact on our own lives.

Koechner: Absolutely. We watch carnage like that on the news all the time. But even when it’s something happening in the United States, I’m not there. Whether it’s Katrina, or the floods of Colorado recently, or the storm in New York last year. You’re certainly empathetic, but you don’t have that real empathy. Or at least I think a majority of us don’t. That’s probably because we’re just inundated with it too much all of the time. Plus, you can’t allow yourself to be devastated by every tragedy, because they’re happening constantly, and you have to keep living.

The Dissolve: Do you have a favorite scene from the movie?

Koechner: It might be when he kills the old lady, because he’s so gleeful about it. He laughs about scaring her to death. He was smiling the entire time! Or it might be when… I can’t remember exactly, but they’re inside of a building?

The Dissolve: Is it the scene where one of Ben’s potential victims gets away, and they chase him into a hideout, and then another camera crew shows up?

Koechner: Yes! That’s it. Another camera crew shows up, and another sound guy gets shot. And you’re surprised and delighted at the same time, and it doesn’t feel cheap. You’re like, “Oh my God. This kind of thing is happening all over the place.” Yeah, that was a nice revelation. That was beautiful.

The Dissolve: So you’ve thought about remaking it?

Koechner: Yeah. But I wonder, with so much reality television now, if it would even work. It would seem like trying to make a comment on reality television, but the comment’s already been made. Maybe the snake’s already eating its own tail. I mean, how satirical is it if you’re just going, “Look at that!” It’s like, “Yeah, I know. I watch TLC. I already get it.”

I was going to have a different take on it. It was going to be a family of serial killers. And they’d have old footage of his grandfather, who was a serial killer, and he is, too. This is just the family business.

The Dissolve: Did you ever try to see whether anyone would be interested in it?

Koechner: No, it didn’t get that far. You know, it’s all about money and the marketing, and that’s a tough sell. So that would have to be a passion project. It’s probably a time-suck that’s not going to deliver for you. Although who knows? Maybe it would be a good TV show.

The Dissolve: There’s something interesting about the filmmakers themselves in Man Bites Dog, and the fact that they start accepting money from Ben to work on it. There’s the sense that all that matters is the film. They’ll do anything. I also just saw Jodorowsky’s Dune, where Alejandro Jodorowsky says if he had to cut off his arm to make a movie, he would do it.

The Dissolve: It’s hyperbole, but it’s the same idea. Have you ever worked with a director who was that intense or passionate?

Koechner: Well, obviously I’ve had the opportunity to work mostly in comedy, and most of them are studio films, so there’s not that urgency required, or that level of passion. So I’ll have to say no, I don’t think I have. But everyone’s project is the most important thing to them.

I think you’ll see that a little bit more with lower budgets, because you have to be personally invested to make it, because it’s not about the money, it’s about the project. Obviously, if it’s someone’s personal thing, they’re going to have a deeper investment than perhaps I would. I just did this little short film in Vermont that I was invested in emotionally because it was such a touching story. Went up there—flew myself out, basically—and there’s no money in it, but it was one of those things where I felt like, “This should be made.” It was just a little short film about a woman who had grown up in a family with her six siblings, and her two brothers had Duchenne muscular dystrophy, and that’s a fatal form of muscular dystrophy—you can die before you’re an adult. And it just touched me. I was like, “Oh my God, I have to do this.” And I helped them do some fundraising and stuff like that. So I guess that’s as deep as I’ve gotten, in terms of cutting off my arm.

The Dissolve: So flying to Vermont is roughly equivalent to cutting off your arm?