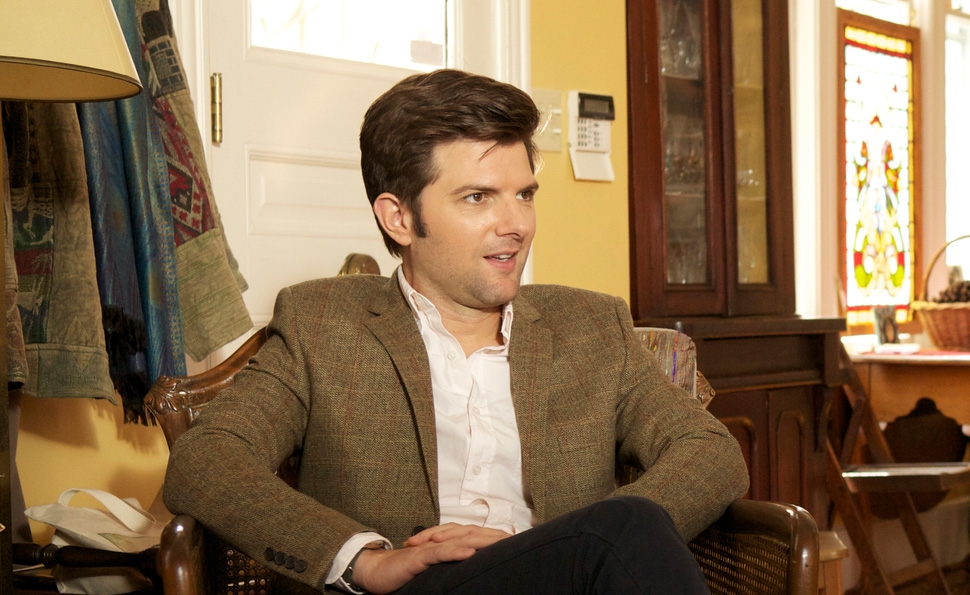 After more than a decade of memorable supporting turns in films like Art School Confidential and Step Brothers, Adam Scott finally found success as a leading man on television, first as the star of the short-lived but much-beloved comedy series Party Down, and now as part of the cast of NBC’s long-running but also-much-beloved Parks And Recreation. He has one of the most appealingly eclectic filmographies on the IMDB: He’s worked with Martin Scorsese (on The Aviator) and earned an Independent Spirit Award nomination (for his impressive lead performance in 2009’s The Vicious Kind), and he’s delivered hilarious performances in arch B-movies like Torque and Piranha 3D. In his new movie A.C.O.D., Scott anchors an all-star cast that includes Richard Jenkins, Catherine O’Hara, Jane Lynch, Clark Duke, Mary Elizabeth Winstead, and his Parks And Recreation co-star Amy Poehler. Scott plays Carter, a commitment-phobic “adult child of divorce” who is forced to try to make peace between his warring parents (Jenkins and O’Hara) when his younger brother Trey (Clark Duke) decides to get married.

Asked to name a film everyone should see, Scott picked Midnight Run, the 1988 action-comedy directed by Martin Brest—then best known as the director of Beverly Hills Cop, later to direct Scent Of A Woman, Meet Joe Black, and Gigli—and written by George Gallo. Robert De Niro stars as disgraced ex-cop and bounty hunter Jack Walsh, who’s on the trail of Charles Grodin’s mob accountant Jonathan “The Duke” Mardukas. Jack has just five days to get The Duke back to Los Angeles in order to collect a substantial reward, with the FBI, the mob, and rival bounty hunters hot on his tail. Only a modest success on its initial release (it was the 29th highest-grossing movie of 1988 behind Crocodile Dundee II, A Nightmare On Elm Street 4, and the re-release of Bambi, among others), Midnight Run has slowly risen in stature thanks to decades of play on cable, VHS, and DVD (though not, as Scott points out, on Blu-ray). This classic action-comedy, which is available on a variety of digital platforms, is an incredibly fun ride—but as Scott explains, it’s more than that, too. 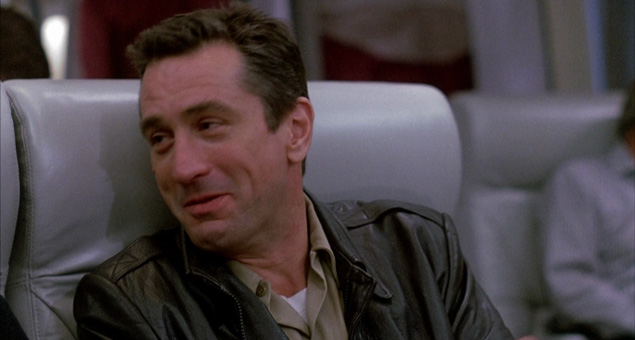 The Dissolve: Why is Midnight Run compulsory viewing?

Adam Scott: I feel like Midnight Run has every single element I look for in a movie. It’s just kind of a grab-bag of everything. But it also isn’t self-aware at all; it’s just a movie that happens to hit upon everything that satisfies me as a moviegoer. It’s really, really funny. Its action scenes are perfectly done. It’s genuinely suspenseful; it’s scary at times. It’s very sad at times. There are two very real lump-in-the-throat moments. It’s such a whole meal, it’s one of my favorite movies.

The Dissolve: It’s great, but on paper, it’s basically a formulaic movie. There are a lot of similar films, in theory. What do you think distinguishes it?

Scott: In 1988, I don’t know how many movies were like Midnight Run. You could point to Badlands, I guess, or a few other road movies. But as far as buddy action-comedies in 1988… We had 48 Hrs., we had the great Beverly Hills Cop, and that’s about it. And I think Martin Brest really perfected it. I think it’s been borrowed from a lot since then. I know for a lot of people in Hollywood, it’s one of their favorites. Even though it’s not thought of as this artsy, influential movie, I think in a lot of ways, it’s permeated movies that have come since.

That’s one of the things I love about it: It is a mainstream movie. I love a big, entertaining Hollywood movie, and when one comes along that is actually good, I am thrilled. In this case, they attached so much great character, and great dialogue, and great relationships to it that it makes it special. You could make the same movie and have generic characters and uninteresting relationships, and have the exact same plot mechanics, and it would not be particularly fun.

The Dissolve: Did you see it in the theater when it first came out?

Scott: I did, yeah. I was 14 or 15, and I loved it. But then I rediscovered it probably 10 years later, and haven’t been able to put it down since.

The Dissolve: How many times would you guess you’ve seen it at this point?

Scott: I don’t know, probably 20 times. And whenever it’s on, I have to watch at least 40 minutes of it.

The Dissolve: Have you watched it recently?

Scott: Let’s see. Well, for one thing, I don’t know why it hasn’t come out on Blu-ray yet. It’s just infuriating. It was out on HD-DVD, and I was one of the suckers who had an HD-DVD player, so I had it. And it was a beautiful version of it. But it really needs a Blu-ray, a comprehensive Blu-ray.

The Dissolve: You backed the wrong horse in the Blu-ray/HD-DVD wars, unfortunately.

Scott: [Laughs.] I definitely did, and had to sell my HD-DVD player and also a pretty good collection of HD-DVDs for, like, 30 cents each.

The Dissolve: Ouch. So it came out in 1988, which makes this year the 25th anniversary. How do you think it holds up?

Scott: I think it holds up great, and one of the great things about it is, it’s a really grounded movie, but it also has these cartoonish elements. Early on in the movie, they set up the conceit—it’s basically just saying to the audience, “This is what we’re doing, and you have to buy this right away: Whenever someone gets punched in the face, they are just immediately out cold. And then you can do with the body what you want. They are just out for at least seven minutes, and whoever threw the punch wins for the moment.”

They do it very early on, and it lasts through the whole movie. And it’s great, because it’s something Martin Brest just kinda threw in there right away, just to let you know what you’re dealing with: This is the kind of movie where when someone gets punched, they are asleep. It’s important, because there are several points in the movie where the story depends upon the fact that someone has to be out cold. I think it’s a great device, and a really fun one, too. 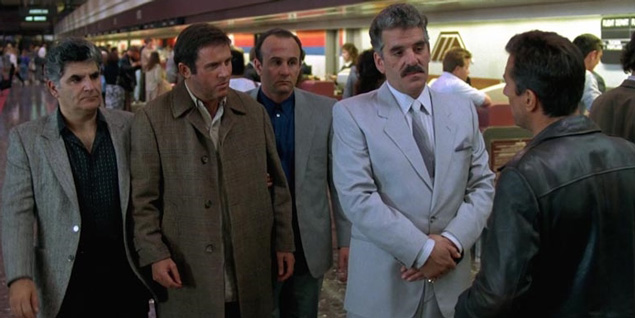 The Dissolve: There’s one part of the plot that always confuses me, and maybe you can clear it up. Why is The Duke arrested in the first place? If he stole money for the mob and gave it to charity, how does he end up in jail? The mob isn’t going to have him arrested.

Scott: As far as the police know, Dennis Farina’s character is a legitimate businessman. Nobody has anything on him, yet, and that’s what De Niro and Charles Grodin are able to do through the course of the movie: actually prove his intent to get the discs, which implicates him. Just the fact that he did this to a supposed legitimate businessman is incredibly illegal.

The Dissolve: Okay, that actually does make sense. Now I’m going to put you on the spot with a Sophie’s Choice: Who is better in the movie, De Niro or Grodin?

Scott: Man, the movie is so dependent upon their relationship and the interplay between those two guys, I absolutely cannot separate them. Like the “litmus configuration” scene. If that was just one of them, and someone else that couldn’t really keep up with the other, it wouldn’t work, and that’s the whole movie. I don’t think it’s possible to parse out those performances; I think one is simply not possible without the other.

The Dissolve: Well done, you effectively dodged that one.

Scott: [Laughs.] I took the easy way out.

The Dissolve: No, you’re right. It was a trick question. Do you have a favorite scene?

Actually, that’s one of the key elements of the movie, the villain. Dennis Farina is frightening, and I think a mistake too often made in comedies is they try to make the villain funny. If you want the stakes to be properly in line, the villain has to be really, really scary, and there can be nothing funny about him. They certainly achieve it here. Same with 48 Hrs.—James Remar in that movie is so scary. It makes the movie funnier when the villain is actually a real threat.

The Dissolve: I’m going to test your Midnight Run trivia. Supposedly there were two other serious candidates for the Charles Grodin role. Can you name them?

The Dissolve: You got them both. Nicely done.

Scott: Both of those would be really interesting choices. I’m really happy Charles Grodin got the part. He is revelatory. I can’t imagine it without him. With Robin, it would’ve been a different movie. And Cher, it would’ve been interesting, too—she was doing great work in movies back then.

The Dissolve: You clearly love this movie, but you haven’t done a ton of stuff like it. The only action-y thing I can think of you in is Torque. Is that something you’d like to do more of?

Scott: Action-comedy is my favorite genre, so it’s something I’m aching to do. 21 Jump Street is an example of a great action-comedy. I loved it. Pineapple Express is another one, I love that movie. But otherwise, there aren’t many action-comedies made anymore, sadly.

The Dissolve: Last year, De Niro talked about how he was working on the script for a Midnight Run sequel about his character and The Duke’s son. That part sounds like a perfect fit for you. If the movie happens, we should make that happen.