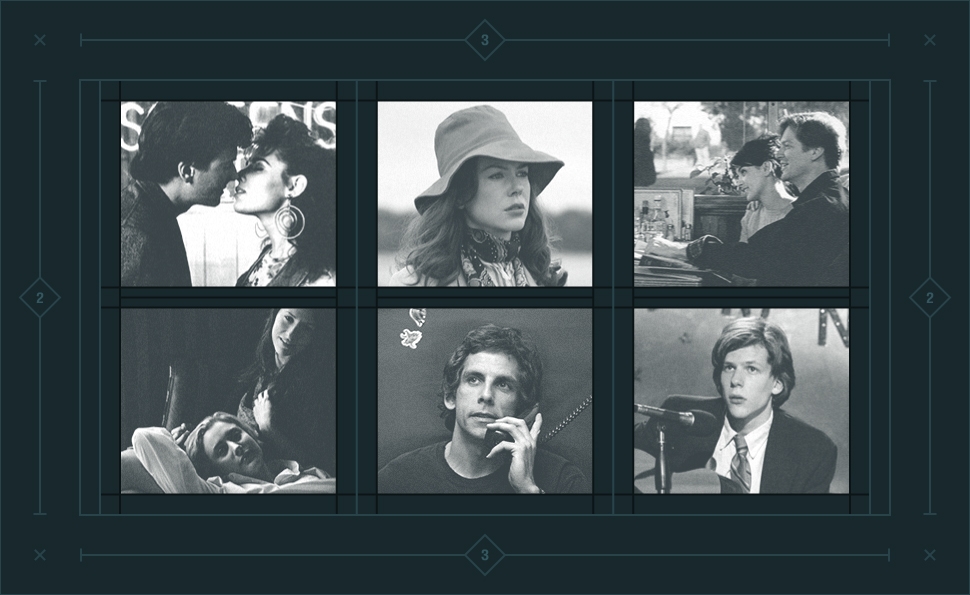 With 3 x 2, The Dissolve suggests a series of three double features that serve as introductions to notable filmmakers, performers, and genres. Want to know what an important area of film is all about? These guides will catch you up over the course of three nights.

Opening this week, While We’re Young is Noah Baumbach’s eighth film as a director, the latest in a career that stretches back 20 years. The story of a shared mid-life crisis, it’s a continuation of themes Baumbach has explored since his debut, Kicking And Screaming, which found a group of recent college grads staring into the future while clinging to the past. There’s no mistaking one film for another, however: Baumbach has changed considerably in 20 years, evolving into a more confident stylist as his characters have grown more complex (and often thornier).

In conjunction with While We’re Young’s release, 16 cities will be hosting the four-film series “Growing Up Baumbach,” which finds Baumbach’s latest accompanied by three films from his past. But even those who don’t live in cities hosting the series can catch up with Baumbach’s films. Here’s our three-night plan. 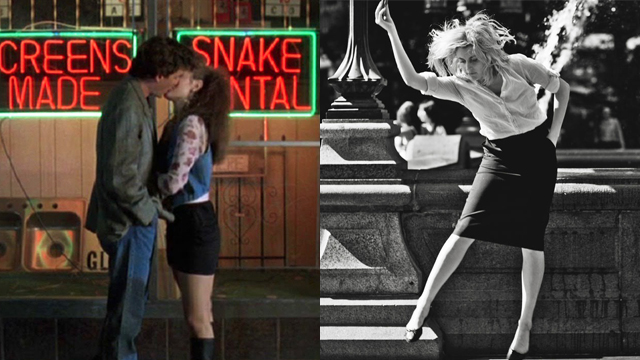 For a while, it wasn’t hard to miss Noah Baumbach. His 1995 debut, Kicking And Screaming, which he made at the age of 24, received a limited theatrical release and a handful of enthusiastic reviews from major critics before slipping onto video-store shelves. Casual browsers could be forgiven for mistaking it for any number of movies about well-educated twentysomethings talking about themselves released around the same time, a period when the self-reflective yearning of Generation X briefly became the center of the pop-culture universe. (The uninspired VHS cover didn’t help.) But those who picked it up and took it home knew right away that they’d found something special, thanks to the quality of that talk. From the start, Baumbach had a gift for memorable dialogue, and a Woody Allen-like knack for creating characters lacking just enough self-awareness to recognize the occasional ridiculousness of what they were saying. “Oh, I’ve been to Prague,” Grover (Josh Hamilton) tells his girlfriend Jane (Olivia D’Abo) shortly before she leaves on a European trip he doesn’t want her to take. Then he keeps going: “Well, I haven’t ‘been to Prague’ been to Prague, but I know that thing, I know that, ‘Stop shaving your armpits, read the Unbearable Lightness Of Being, fall in love a sculptor, now I realize how bad American coffee is’ thing…”

His condition isn’t unusual in the world of Kicking And Screaming, which Baumbach fills with characters who know a lot but who’ve experienced little, and are about to get beaten up by the experiences they do have. The central foursome—well-played by Hamilton, Chris Eigeman, Carlos Jacott, and Jason Wiles—decide to stick around their college town, and stick together, after graduation, only to find that time keeps moving on without them. They have their whole lives ahead of them, but can only see opportunities slip away, so they drink and challenge each other to name Friday The 13th sequels in order to push back their fears. Baumbach doesn’t always balance the humor with the underlying melancholy, but when the elements line up, it’s extraordinary, and a sign of things to come.

The guys from Kicking And Screaming would probably recognize a sufferer of the same condition had they ever met Frances Halladay (Greta Gerwig), the protagonist of Frances Ha. A dancer whose career has never quite taken off, Frances has made her best friend and roommate Sophie (Mickey Sumner) the anchor of her life. When Sophie moves out, however, Frances is left adrift, floating from one makeshift living arrangement to the next as she struggles to figure out what to do with her life.

Co-written by Gerwig, who became Baumbach’s romantic partner, Frances Ha was shot cheaply and digitally, but its lush black-and-white photography doesn’t betray its origins, which are mostly evident in the looseness with which Baumbach shoots. There were few more joyous images in theaters in 2013 than Gerwig bounding down the street accompanied by David Bowie’s “Modern Love,” but the film never sells short the perilousness of Frances’ state. With few prospects and less money, she finds her options increasingly limited, and the forceful, outsized personality that makes her charming to some can make her off-putting to others, including those who might be able to lend her a helping hand. But her greatest threat comes from herself and her seeming inability to move on to the next phase of her life, even as those around her roll with the changes. She’s as much paralyzed as the protagonists of Baumbach’s first film, but the way disaster threatens to claim her at every moment—to say nothing of the up-for-anything shooting style Baumbach discovered in the intervening years—gives the film a charge that Kicking And Screaming never found. Baumbach had grown up in the years between, and learned to raise the stakes. 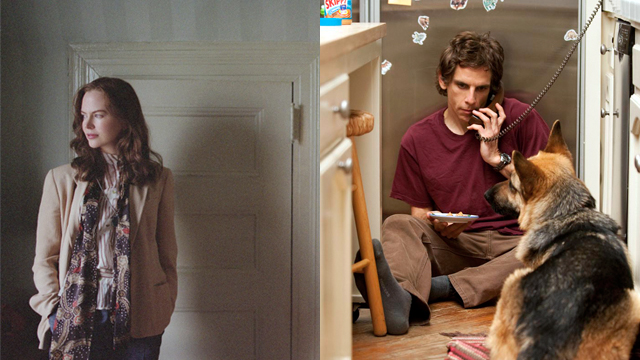 Let’s get this out of the way at the beginning: This is going to be kind of a rough night. Baumbach didn’t direct a feature film between 1998’s Mr. Jealousy and 2005’s The Squid And Whale. (More on each below.) When he came back, he returned as a master of discomfort, a gift he put to extensive use in Margot At The Wedding and Greenberg. A pair of acidic character studies, both require spending time in unpleasant, though often fascinating, company.

Of the two, Margot At The Wedding is the tougher sit. Nicole Kidman stars as the eponymous Margot, a writer of some renown who travels to Long Island with her prepubescent son Claude (Zane Pais) shortly before the wedding of her sister Pauline (Jennifer Jason Leigh, Baumbach’s wife at the time) to the aimless Malcolm (Jack Black). Tensions rise and fall as the big day approaches. The sisters dredge up the past and take out their fears and disillusionment on each other, but it’s often Claude who ends up getting hurt. It’s an uncompromising film filled with similarly uncompromising performances. Leigh, Kidman, and Black do nothing to soften their characters, make them more likable, or push them toward redemption. Baumbach, working with cinematographer Harris Savides, shoots it with unrelenting intimacy, staying close to the characters and making even the seascapes look as claustrophobic as the cramped interiors where the characters do much of their fighting. Those same qualities make it a bit much, however, particularly once it becomes clear that it’s ultimately less a discrete story than a peek at a never-ending cycle, one in which Claude will soon find himself caught as well.

With Greenberg, Baumbach brought the same relentlessness to one of his arrested-development cases, the deeply embittered Roger Greenberg (Ben Stiller). A New Yorker coming off a nervous breakdown, Roger has decided to recuperate at the Los Angeles home of his brother while his brother and his family are out of town. A carpenter by trade, but still not over a career in pop music cut short by his refusal to sign with a label, Roger is ostensibly tasked with building a doghouse for the family’s dog, and soon finds himself striking up an awkward sort-of romance with their dog-walker Florence (Gerwig).

The plot has the bones of a romantic comedy, but Greenberg keeps resisting formula, in large part because Baumbach and Stiller make Roger so relentlessly unlikeable—and do little to change that impression. Baumbach doesn’t traffic in easy payoffs, and Greenberg is no exception. If anything, Roger seems to get worse over the course of the movie, particularly in a long, uncomfortable (and While We’re Young-foreshadowing) party sequence in which he gets high and attempts to bond with a bunch of college-age kids who see him as a relic of an earlier era, in part through the music of Duran Duran. Stiller’s performance is an example of how movie-star charisma can push back against the script: Roger proves himself an asshole at almost every opportunity, yet Stiller makes it impossible not to root for him to turn it around, even if Roger himself shows no inclination of wanting to do so. Also helping matters: Florence, whom Gerwig plays with maximum radiance, seems to see something worth saving in him even if no one else does. The film’s final sliver of hope feels both hard-earned and uncertain. 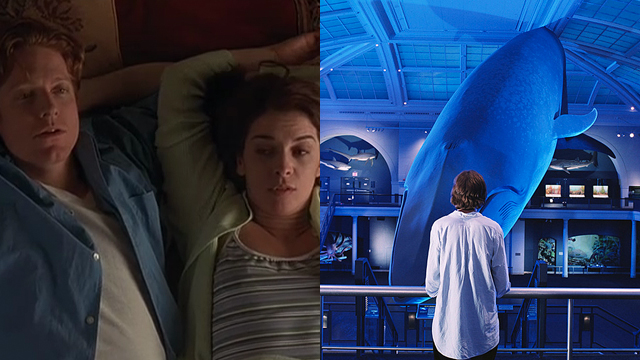 Mr. Jealousy isn’t Baumbach’s worst film. That would be the little-seen low-budget 1997 feature Highball, which Baumbach has disowned (though even it has its charms). Mr. Jealousy isn’t a bad film at all, really, even if it now looks like a dead end. The story of the troubled romance between Ramona (Annabella Sciorra) and the perpetually jealous—hence the title—Lester (Eric Stoltz), Mr. Jealousy marries farcical devices to clever dialogue and an undercurrent of darkness. It’s very much the product of the man who made Kicking And Screaming, even returning several cast members from that film (Stoltz, Jacott, Eigeman) for what might have developed into a Noah Baumbach stock company.

That didn’t quite work out. Though in some respects a more mature film than Kicking And Screaming, it’s also less satisfying. Even if it now looks like something of an overlooked gem thanks to some inspired dialogue and performances (particularly Jacott’s), Mr. Jealousy didn’t connect with audiences, leading Baumbach to step back for a bit. “The earlier films are jokier,” Baumbach told Jonathan Lethem in a 2005 interview. “I started making movies pretty young; I had a lot of preconceived ideas about who I was as a filmmaker and the kind of career I wanted to have that were still connected, I think, to the teenager I was rather than the person I was becoming.”

What he was becoming was the sort of director who could make The Squid And The Whale, a richer, more complex, and more cinematic film than his early work ever suggested. Set in 1986 Brooklyn and drawn from Baumbach’s own childhood, it’s the story of a divorce told from the perspective of two boys—teenaged Walt (Jesse Eisenberg) and 12-year-old Frank (Owen Kline)—living in the wreckage of their parents’ disintegrated marriage. Jeff Daniels plays the father, Bernard, a bitter, struggling writer modeled in part after Baumbach’s father, Jonathan Baumbach (who even supplied part of the wardrobe Daniels wears in the film). Laura Linney co-stars as the mother, Joan, a character inspired by Baumbach’s mother, Village Voice critic Georgia Brown. Given full-bodied, often selfish, seldom cuddly characters, both do some of the best work of their careers. Over the course of the film, the boys bounce between both parents as part of an awkward, cross-borough shared-custody arrangement that exposes them to each parent’s worst tendencies—and demonstrates how those  flaws get handed down to the next generation.

What makes The Squid And The Whale, which remains Baumbach’s best film, so remarkable is the way it mixes humor, unnerving intimacy, and generosity. The parents behave awfully—as does Walt—and the film never looks away or rushes to forgive. But it also seeks to understand that awfulness, setting a pattern Baumbach would follow in subsequent features. (In a 2013 New Yorker profile, Baumbach’s father says, “Noah’s joke is that The Squid and the Whale was me at my worst, Margot was Georgia at her worst, and Greenberg was him at his worst.”) He gets in close to find the truth of the situation, even if what he finds isn’t always pretty. The camera doesn’t blink. Neither does the filmmaker behind it.