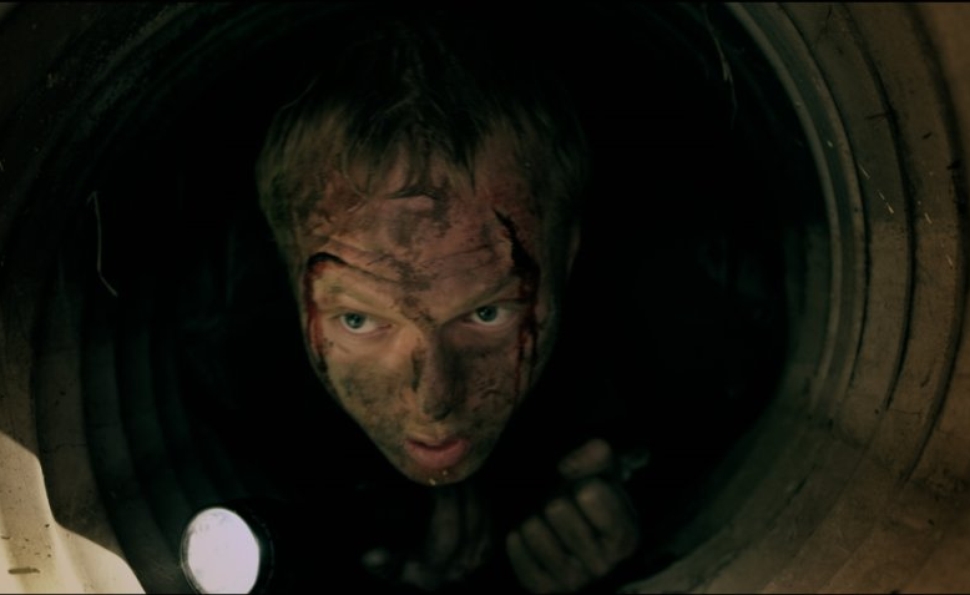 Before scene one even lights up the screen, Jesse Thomas Cook’s new provocation Septic Man poses a bold challenge. Over the opening credits, a woman drops a big, fat, messy shart. The image that accompanies the tail end of that sound is no more pleasant. She continues to spout thick streams of waste from either end, pausing only to scarf a handful of pills before finally passing out in a puddle of her own filth. The scene has no bearing whatsoever on the film that follows. It’s an overture, a warning shot Cook fires to herald what will be a long, taxing volley of scatological warfare on the viewer. “Acquaint yourself well with human excrement,” he warns, “or turn back now. Breathe it in. Smell it. Taste it.”

Cook works with feces and vomit the way Van Gogh took to oil paint. In its sophomoric fascination with all things repulsive, Septic Man demands a remarkably high cost of admission into its grime-caked world. The question then becomes whether wading through this dank bog of unholy shit is worth it, whether a redemptive light will pierce its choking cloud of farts. Unfortunately, this stinker doesn’t possess the brains, wit, or personality to justify its transgressions.

The film introduces “civic-minded shitsucker” Jack (Jason David Brown) in his natural element: knee-deep in liquefied waste, jimmying a waterlogged rat carcass out of a blocked pipe. The septic worker’s hometown has suddenly initiated an emergency evacuation after a contaminant in the water supply begins turning people into blood-vomiting zombies. (One of many story elements that’s picked up when needed, and abruptly cast aside once it has outlived its usefulness.) As Jack continues about his work, a gaunt government employee most likely named Exposition Man (Julian Richings) arrives on the scene to helpfully remind Jack of many things he already knows, including complimenting his “Art Of War brilliant” rerouting of Colliewood’s pipe system 15 years before. He makes Jack an offer he can’t refuse: a briefcase full of Canadian cash if Jack’s willing to stick around and get to the bottom of the dirty-water issue. The man makes a compelling case, reminding Jack of his pregnant wife (Molly Dunsworth) and tantalizing him with the promise of a better life, via acidic barbs like, “Your wife probably smells shit every time you fuck her.”

Jack ventures into the underground sewer system in hot pursuit of answers, and before long, he’s trapped in a barren septic tank without food or water—which, frankly, seems like a rookie mistake unbefitting a septic worker of Jack’s stature. Is this not the virtuoso who singlehandedly repaired the entire town’s pipe system back in ’99, Art Of War style? But it’s distressingly common for ostensibly competent characters to act like complete morons when it suits the plot’s purposes.

In the sewers, Jack encounters a pair of developmentally and literally misshapen characters. An ambiguously simple-minded giant (Robert Maillet) lends Jack a helping hand, and the pair team up to topple Lord Auch (Tim Burd), the giant’s homicidal, ratlike brother. As all this takes place, a repellent layer of poop forms and hardens around Jack. At the film’s high point, he emerges from his fecal cocoon having transformed into a monstrosity redolent of Troma’s beloved mascot, the Toxic Avenger, but without the charm or depth.

Beyond its mere unfunniness and stupidity, Septic Man is criminally unimaginative. Gross-outs this heinous could easily be forgiven or even enjoyed, given a novel execution. But Cook goes for a more-is-more approach, betting that the simple volume of filth is an ample substitute for creativity. As the movie lurches into its second act, vomiting becomes a default action for the characters, indiscriminately filling silences and often taking the place of such frilly accoutrements as dialogue or character development. It’s easy to imagine Cook slightly offscreen, rubbing his hands in twisted glee and jeering, “When in doubt, puke!” The term ad nauseam has never been more called-for. For his revolting symphony of evocatively squelchy sound effects, Septic Man’s foley artist has undoubtedly earned himself a place in hell. It’s a joyless, uniquely unpleasant slog. Some jokes deliver: Watching the giant sharpen his brother’s fangs sucker-punches viewers with a tragicomic flash of a morbidly dysfunctional family dynamic. But most moments that aim for campy transcendence miss the mark by miles. When Jack cradles the charred, crusty corpse of an infant and coos, “Don’t worry, I’ll get you out of here,” it doesn’t elicit laughter as much as concern for the deranged mind that begat this ghastly cinematic abortion. Septic Man is sadistically dull, and it will never be met with the cult love it so clearly longs for. It’s a loose turd of a film that’s best flushed back down the toilet it crawled out of.