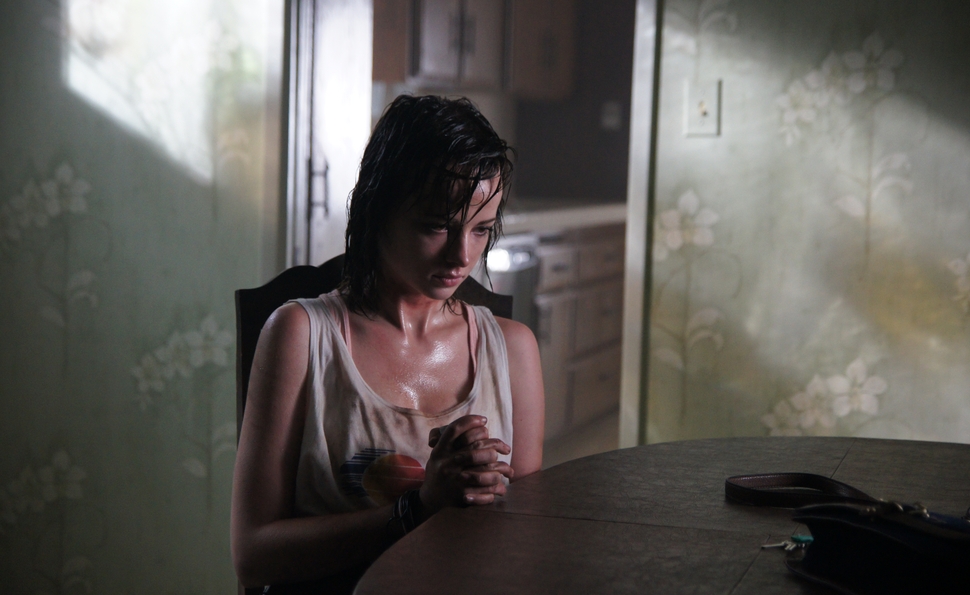 At The Devil's Door

When Nicholas McCarthy’s disjointed, ultimately disappointing second feature premièred at SXSW earlier this year, it was called Home. While it’s easy to understand why IFC Midnight ultimately opted for the less generic, more VOD-friendly At The Devil’s Door, the original title really said it best: As much as this movie is about anything, it’s about home. This horror movie twists the typical possession story into a multi-generational meditation on belonging—and whether the security of home is more easily mined from a place or a person. But it has nothing to say, and too many ways to say it.

Now titled At The Devil’s Door, McCarthy’s sophomore project (following 2012’s The Pact) doesn’t have any individually compelling characters, but the most interesting thing about it is how it uses the evil at its heart to bind together three women, each of whom is feeling incomplete in her own way. Things begin in 1987, deep within some hellish stretch of California desert. Awkward star Ashley Rickards (whose character’s name is guarded like a plot twist, and eventually revealed with a thud) is a young woman on the last vacation of her life, a trip that comes to an unusual conclusion when her mysterious new boyfriend convinces her to go to a remote trailer home and get paid $500 to play some creepy dude’s shell game. “He’s chosen you,” says the obviously evil guy who never factors into the story again. Then he instructs the girl to walk to the end of the road and say her name so “he knows how to find you.” Inexplicably, the girl actually follows these instructions, and then lives happily ever after. No, just kidding, she gets super-possessed, and the devil wears her body like a cheap costume.

Cut to a suburban neighborhood some years later, where an immigrant real-estate agent named Leigh (Maria Full Of Grace star Catalina Sandino Moreno) is tasked with selling the house where Rickard’s character used to live. She never actually shows the house to prospective clients or anything like that, as—to McCarthy’s occasional credit—this isn’t the kind of film that requires incident to move forward. Childless, and seemingly betrayed by the financial state of her adopted country, Leigh is alone, save for her artist sister Vera (Glee’s Naya Rivera), the film’s third heroine. McCarthy dispenses meaningful information about his leads so stingily that every morsel has to be savored like it’s the last bite of a chewy fillet. The film’s women are predominately defined by the dark spaces they stalk in search of the next jump-scare.

So somnambulantly paced that it makes The House Of The Devil feel like Run Lola Run, At The Devil’s Door is a frustrating display of craft desperately searching for purpose. Like a giant gob of peanut butter without any bread, McCarthy’s film is an empty smother of tense disquiet that tastes fine, but sticks to the roof of the mouth. It’s one of those movies where what’s happening is significantly less important than how queasy it’s making viewers; the low rumble on the soundtrack is so consistent that the horror eventually gives way to a prevailing sense of indigestion.

It’s clear that McCarthy is a well-schooled fiend for this stuff, and At The Devil’s Door exhibits a rare understanding of how the camera can mine terror from the innocuous. Virtually every frame in this film is designed for maximum dread. Every composition is deep with pockets of empty space that work to weaponize the audience’s imagination. Bridger Nielson’s cinematography is a touch under-lit, but his lens pushes forward with a persistence that simultaneously urges the eye to close and look closer. The special effects are used sparingly, but (or therefore) deliver every time.

But to what end? While McCarthy generates a number of neat sequences—the best of which is a seemingly self-contained vignette about a babysitter gone rogue—the film’s best ideas seem as isolated as its characters. A haunted-house story that eventually morphs into a pseudo-sequel to Rosemary’s Baby, At The Devil’s Door touches on a number of themes without ever really giving them life. McCarthy’s script invokes the corruptive influence of money, and familial dependence. It even conflates demonic transference with immigration. But the film is too busy fumbling around in the darkness to see anything special.