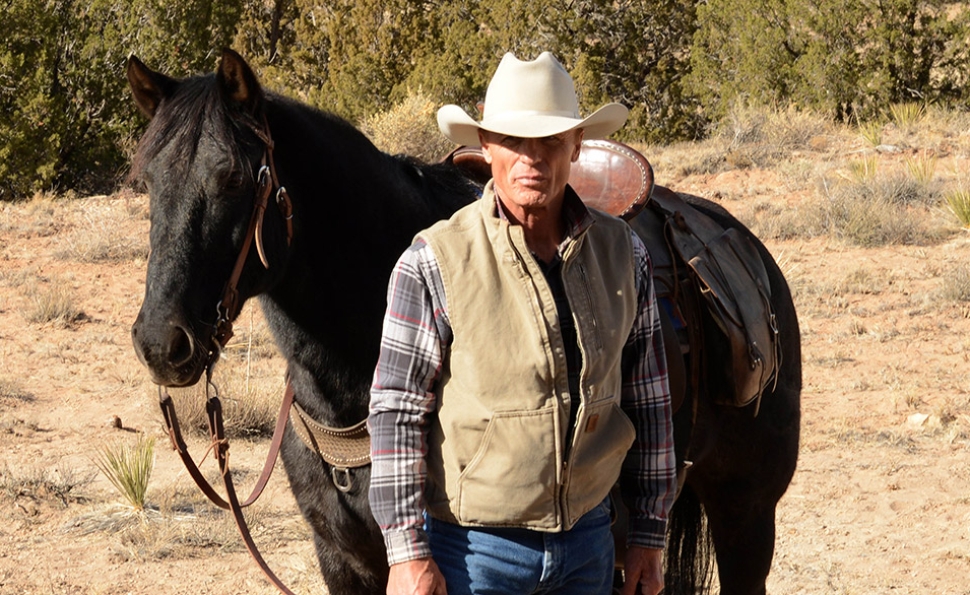 Before the hokey third act, there’s much to like about Michael Berry’s border-crossing drama Frontera. The story of a Mexican immigrant in Arizona wrongly accused of killing a retired sheriff’s wife, Frontera is notable for the way it unfolds its events, snakelike, across Arizona and Mexico. The film aims a kind eye at its subjects—its immigrants are real characters, not just vehicles of understanding for white people, and most of the dialogue is in Spanish. The expected morals about tolerance are still in place, and they’re tiresome. But when Berry, making his feature writing and directing debut, takes the time to do something unexpected, it usually pays off.

Michael Peña plays Miguel, a good-hearted Mexican man who heads to America looking for work and a new home for his family. He and his lazy crossing partner Jose (Michael Ray Escamilla) trek through land belonging to old-timer Roy (Ed Harris), meet his sympathetic wife Olivia (Amy Madigan), and are hunted for sport by a gaggle of gun-toting teens. In the ensuing commotion, the kids spook Olivia’s horse, and Olivia is killed. But when Roy reaches the scene, all he sees is his dead wife, with a damn Mexican standing over her, holding the reins to her horse.

What follows isn’t a mystery, since the audience already knows who’s responsible, and it isn’t quite a Western, despite the horses and landscapes. Instead, Frontera becomes a meandering look at what it means to be an unwanted person in a border town. After Miguel escapes from Roy, his companion joins a couple of crossers with looser morals who survive the night by robbing a family at knifepoint. (They beeline for the fridge first and fill their bags with leftovers, before grabbing cash and car keys almost as an afterthought.) Meanwhile, Miguel, the honest man, sleeps cramped under a freeway overpass. It’s one of a handful of strong sequences that lay out the devastating choices migrants face, and how tempting it is to make the wrong ones.

The death and false accusations are the least interesting things about Frontera, but they let the story billow out in unexpected ways. Berry is at his strongest when he shows an interest in social realism, as when Eva Longoria, glammed down from her Desperate Housewives days to play a legitimately desperate housewife, strikes a deal late in the movie with a coyote. Her passage ends perhaps the only way it can, given that she’s the lone woman traveling with violent, burly men on a journey notorious for its abuse of females. But the scenes that precede it (Longoria crouching in the bed of a truck, masses huddled in the desert viewed through a wide-angle lens, greasy handshakes between smugglers) evoke grueling details about the human side of illegal immigration.

The film is structured to allow for the standard climactic moment of grace and understanding between the bigoted American and the desperate Mexican, but the arc doesn’t work here. Berry has neglected to find anything interesting to do with the glowering Harris, who never really seems that bad—or that good, for that matter. Roy has spent his life enforcing immigration law with a presumably iron fist, yet the script never takes advantage of the lofty Sheriff Joe Arpaio-like position it’s assigned him, and he might as well be any other cowboy who occasionally snarls the word “Mexican.” He shares a single conversation with Miguel, and all is well.

The final scenes are laughable in their thudding symbolism and twisted geospatial logic, a far cry from the nuance of 2011’s superior Mexican-immigrant drama A Better Life. Frontera is, on a whole, more interested in situations than characters—Peña, a stoic onscreen presence, is nearly as wasted here as Harris. Still, take the small victories where they come: Frontera has easy answers, but at least it takes a hard road to get there.