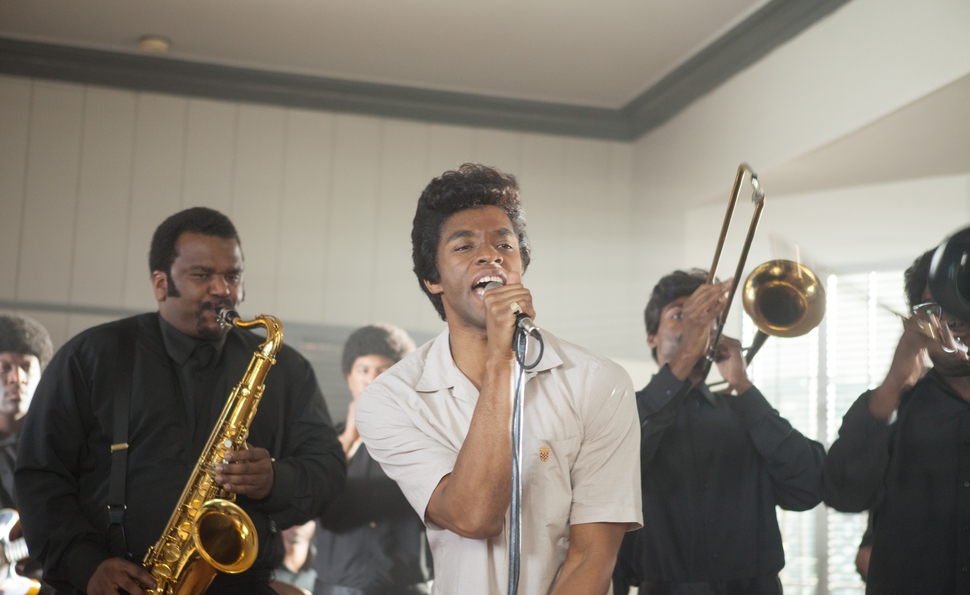 The trouble with attempting a James Brown biopic is, there’s too much life for one movie. A compelling film could be made simply from the more memorable chapters of Brown’s life: the decision to self-finance the 1963 Live At The Apollo album that took his career to the stratosphere; the night he helped prevent a riot in Boston in the wake of Martin Luther King’s assassination; the time he lost his band and didn’t miss a step, recruiting a group of young guns that included Bootsy and Catfish Collins (only to lose them, too); the incident with the gun and the high-speed chase that landed him in prison in 1988; and so on. As if recognizing this, Get On Up, a new biopic directed by Tate Taylor (The Help) and co-written by Jez and John-Henry Butterworth (Edge Of Tomorrow), doesn’t even try tell his story in a straightforward fashion. The script jumps freely from chapter to chapter in the strange story of the kid from Augusta, Georgia who grew up to be the Godfather Of Soul (and other self-appointed superlatives) by pushing rhythm to the fore—then pushing it even further.

At times, Taylor seems to be attempting a cinematic equivalent of Brown’s music, letting the beat of one scene shift into to the next as the spirit moves it. That approach yields a few strong moments: Doing a tame lip-sync in a goofy sweater for smiling white actors as part of an appearance in the movie Ski Party, Brown realizes he needs a bigger, blacker sound, and the film flashes to an incendiary later performance. More often, however, the approach makes the film feel disjointed. Plot threads gets picked up, dropped, then picked up again after the film seems to have abandoned them. Characters walk away from Brown, only to appear in the next scene, as the film flashes back to a time before their departure. It’s never confusing: Tate and a production design sensitive to the changing era (to say nothing of telltale changes in hairstyles) make it easy to keep track of where the movie is in time. But the juxtapositions don’t often rhyme in any meaningful way.

The approach feels more affected than freeing, as does Tate’s sometimes overstylized direction—the fluid camerawork sometimes gets in the way of the intensity rather than amping it up. It’s telling that the barely edited footage of Brown’s original performance in The T.A.M.I. Show, where the Famous Flames upstaged the Rolling Stones, generates a lot more heat than Tate’s re-staging. (Mick Jagger, incidentally, is one of the film’s producers, but the film still plays it as a humiliating moment, with Brown presented as an impossible act for anyone to follow.) The unsettled approach also doesn’t allow for a particularly strong sense of how Brown’s music evolved, or the scope of its influence.

What it does have, thanks to a remarkable central performance from Chadwick Boseman, is a terrific sense of Brown. Boseman leaves the singing to recordings of Brown, but nails both the dance moves and Brown’s unmistakable vocal cadence. The way he makes the character consistent across all eras—as a man with a bottomless need for musical excellence, popular success, respect, and women—makes the film cohere. The film occasionally requires him to address the camera directly, but Boseman’s easy charisma wins sympathy even without this touch. Authorized by the Brown estate, the film largely steers away from Brown’s darker sides: His womanizing is presented as high-spiritedness, and his drug addiction and spousal abuse get one scene each. But Boseman’s performance doesn’t smooth away as many elements. It hints at a soul-damaging selfishness even as he charms.

The film reinforces this notion by presenting his life as a series of relationships ruined, either quickly or over the course of years. Chief among them: Brown’s friendship with Bobby Byrd (Nelsan Ellis), whose family took Brown in as a young offender in need of a permanent address to secure parole. Over time, Brown both pushes him to the sidelines of the group Byrd began, and rewards his continued support with disdain, as Ellis brings the right notes of loyalty and resentment to the role. Brown’s first wife, Velma (Jacinte Blankenship), gets little screen time, and the film visits his troubled second marriage to DeeDee (Jill Scott), only to drop her unceremoniously from the movie. (The couple divorced during a period barely covered by the film.) Maceo Parker (Craig Robinson) delivers a list of complaints from Brown’s touring band, and Brown lets them go rather than trying to change his ways. Whether quickly or slowly, the film portrays Brown as a man willing to turn down the volume on everyone around him.

Get On Up finds an easy answer to this in Brown’s relationship with the mother (Viola Davis) who abandoned him. The script also occasionally bogs down in traditional biopic information dumps, as in a scene between Brown and manager Ben Bart (Dan Aykroyd) that has them offering a short primer on the state of African-American politics and Brown’s place in them in the late 1960s. Elsewhere, Taylor gets lost in artful conceits, like a flashback in which a young Brown, humiliated as part of a racist competition pitting blindfolded African-American boys against each other, imagines the jazz band around him playing the funk he’d pioneer as an adult. Yet the energy never flags, the film conveys a deep love of Brown’s music (which fills almost every scene), and Boseman remains magnetic whether onstage or in quiet moments, like when he lets a young, manic Little Richard (Brandon Smith, who makes it easy to wish for a spin-off starring Smith in the role) school him on what to expect from show business and the price he’d have to pay. Was it worth it? The film never answers the question, or even seriously considers it, leaving not much to ponder when it’s done, but much to admire while it lasts.

GoWatchIt: Buy. Rent. Stream Get On Up