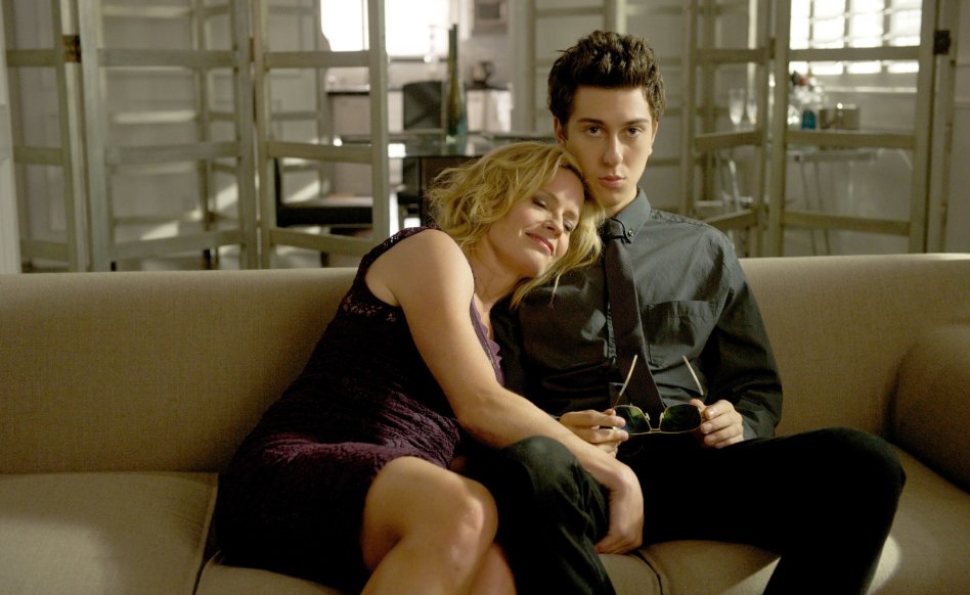 In The Unbearable Lightness Of Being, Milan Kundera writes, “characters are not born like people, of woman; they are born of a situation, a sentence, a metaphor, containing in a nutshell a basic human possibility…” Behaving Badly, Tim Garrick’s new gross-out sex comedy, immediately corroborates Kundera’s claim, as the film’s teenage protagonist was clearly born from the scenario in which he’s introduced: standing in his bedroom, scratching his crab-infested pubic hair, while announcing, via disaffected voiceover, “I am so fucked.”

In fact, it’s reasonably safe to assume that the entire film was spun from that moment—not just because it’s the kind of self-satisfied writing prompt that has resulted in any number of wretched scripts since “Sundance” became a style, but also because Behaving Badly doesn’t follow its first line with a single conflict or character interesting enough to beget any further thought.

Nat Wolff, a former Nickelodeon child star whose recent performance as a budding sociopath in Gia Coppola’s Palo Alto hinted at a long career to come, brings all the charisma of Aaron Taylor-Johnson to the role of a hapless suburban kid named Rick Stevens. Rick is the one who’s “so fucked.” His alcoholic single mom (a distressingly enthusiastic Mary-Louise Parker) has just tried to kill herself, he’s picked up an STD from his friend’s nymphomaniac mother (a distressingly enthusiastic Elisabeth Shue), a deranged Lithuanian classmate is looking to collect on a lost bet, and a bunch of other irrelevant nonsense is also conspiring against him. Most worrisome of all, at least for Rick, is that he’s yet to have sex with Nina Pennington (a distressingly somnambulant Selena Gomez), the cherubic Bible-thumper next door who happens to look like she’s way too young for anyone her own age. As the opening voiceover warns: “The names have not been changed to protect the innocent, because everyone in this story is guilty of something.”

The best thing that can be said about Behaving Badly is that it assimilates so many different teen comedies into its unhygienic Dumpster of a plot that it ultimately doesn’t feel like any of them. As fresh as a stiff tissue and even less appealing, the film takes its cues from so many disparate sources, it almost feels like an accidental spoof. (Accidental spoofs, of course, being the leading cause of stiff tissues.) Its affinity for breaking the fourth wall comes straight out of Ferris Bueller’s Day Off, its manic tone seems lifted from Joseph Kahn’s Detention, its plot points are liberally borrowed from the likes of Risky Business and She’s All That, and the film even reuses a music cue from Can’t Hardly Wait.

There’s a fine line between knowing and derivative, but every bad joke makes it that much easier to see. Behaving Badly is 97 minutes in a search of a laugh, each of them so punishing that viewers are left to spend most of the movie trying to figure out what went wrong. The film is littered with a number of jarringly clever lines, each of which has the benefit of surprise (“Arriving to rehab sober is like showing up at a tennis lesson without a racquet”), but Garrick’s script—which he co-adapted with Scott Russell from a book by Ric Browde—doesn’t seem to understand that a failed gag isn’t just a missed opportunity, it’s negative energy, worse than silence.

Garrick’s direction, on the other hand, smacks of competence without a compass. The form of his film reflects a consistency that’s lacking in every other department, with the camera doing its utmost to unify a story so incoherent that the synopsis on the movie’s IMDb page just throws up its hands and describes Behaving Badly’s narrative as a “rock n’roll journey.” The most “rock n’roll” thing in the film is a Justin Bieber cameo where the troubled pop star plays a jumpsuited prisoner, which is perfect because this is precisely the kind of movie that Justin Bieber would find funny. It’s the kind of movie in which the protagonist tells his lawyer that the villain has threatened to cut off his pinky finger, and the lawyer (a distressingly enthusiastic Heather Graham) replies: “Pinkies are overrated, unless they’re in the stink.” Against all odds, that is one of the film’s least repulsive moments.

The moral, allegedly, is that people shouldn’t be afraid to be themselves, and that parents are every bit as scared and confused as their kids. The actual takeaway, however, is that the digital revolution has deprived a generation of the oversexed entertainment they deserve, seducing movies like this away from the puerile pleasures of their antecedents, and toward an unsettling seediness that makes Behaving Badly feel not like Superbad so much as like a genuine snuff film.