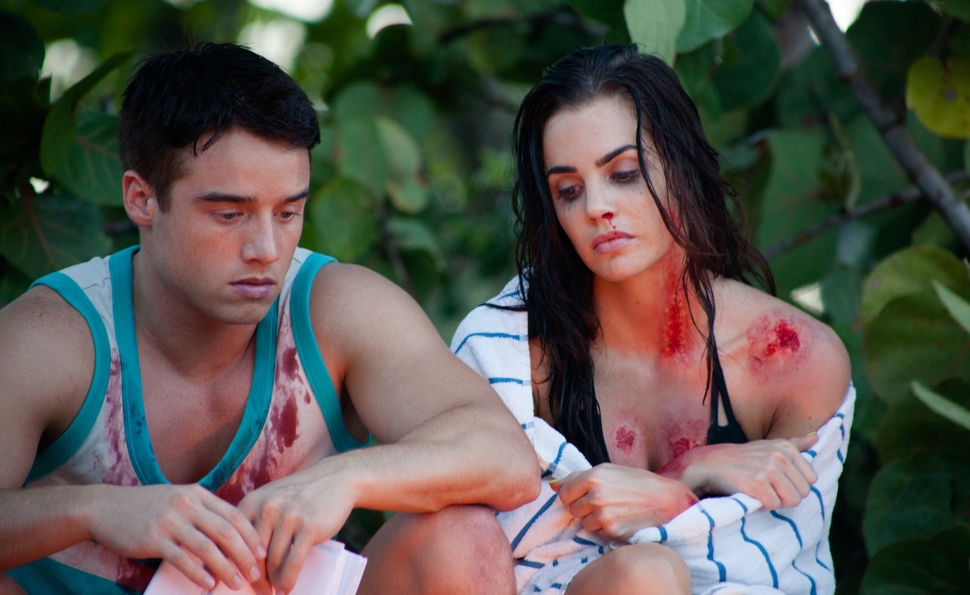 It’s not an admirable aspiration. But it is the raison behind (beneath?) this grossly indecent gross-out horror flick’s most inventive scene, wherein an actor by the contextually regrettable name of Brando Eaton—playing a frat-guy type attending his brother’s wedding in the Dominican Republic—attempts to console his panicking girlfriend Penny (Jillian Murray) after she happens upon some human remains. He attends to his task with a diligence that any man, and especially any woman, will find honorable. Alas, Penny turns out to be spectacularly unwell.

Director Kaare Andrews—who, somewhat tellingly, contributed the segment titled “V Is For Vagitus” to the first ABCs Of Death anthology—is probably better known for his comic books than for his movies. He’s the current writer and artist on Marvel’s Iron Fist: The Living Weapon, which one can only pray is less interested in vaginal trauma than Patient Zero is. Previously, he wrote and drew Spider-Man: Reign, a Dark Knight Returns-esque tale wherein an aged Peter Parker un-retires from superheroics in a totalitarian future New York City like the one we were all promised. In that story, Peter’s beloved spouse Mary Jane Watson-Parker is dead, having succumbed to cancer contracted from repeated exposure to his radioactive semen. One begins to detect a theme in Andrews’ output. Er, body of work. Oeuvre. Let’s just say “oeuvre.”

Anyway, Patient Zero takes a long time getting there and goes on for a long time afterward. The film opens with a bearded Sean Astin being held against his will in a secret island laboratory, because—as his white-coated captors keep explaining with a patience and good humor that could only be called “expository”—he’s the only person known to science to be immune to a virus that threatens to become a franchise-prolonging pandemic. This was Astin’s superpower in Rudy, too: dogged determination! But he had a much more optimistic attitude in that movie, when he wasn’t locked in Hannibal Lecter’s glass cage, minus the air holes.

The unscrupulous Dr. Edwards (Currie Graham) attempts to create a vaccine, resulting in the first of many infected-blood-gets-vomited-into-someone’s-face scenes. It’s viscerally shocking, if predictable, the first time it happens; the effect diminishes swiftly with repetition. Meanwhile, Josh (Eaton), Penny, Josh’s brother Marcus (Mitch Ryan), and his pal Dobbs (Ryan Donowho, whose name might be some kind of SAG protest) arrive on the very same island to get high and have sex and confess to one another, as young, blandly attractive horror-flick victims must. How long until one of them is exposed to the contagion? How long until they stumble upon the creepy lab? How long until it collapses into flesh-dripping bedlam because Nedry cut the power to the Velociraptor fences or whatever?

The original Cabin Fever marked Eli Roth’s directing debut. Cabin Fever 2: Spring Fever came from Ti West. Perhaps Andrews will acquire a following as his predecessors have, but Patient Zero does little to suggest he deserves one. He and screenwriter Jake Wade Wall seem fully aware of the long line of icky horror comedies that precede theirs, but their attempt isn’t scary enough for homage or funny enough for satire. They muster just enough baseline, journeyman competence to be boring.

Besides that oral-sex scene, a pair of other moments stand out: There’s a funny bit of business with a guy who overestimates his ability to withstand the recoil of his revolver, and a brief, chilling scene where two infected women each try to hide the extent of their illness from the other, whom they believe to be healthy. Just for a second, Andrews puts something in the frame that elicits actual sympathy, rather than just a knee-jerk reaction to something nauseating. But the inspiration of that moment isn’t catching. The movie surrounding it is naturally immune.