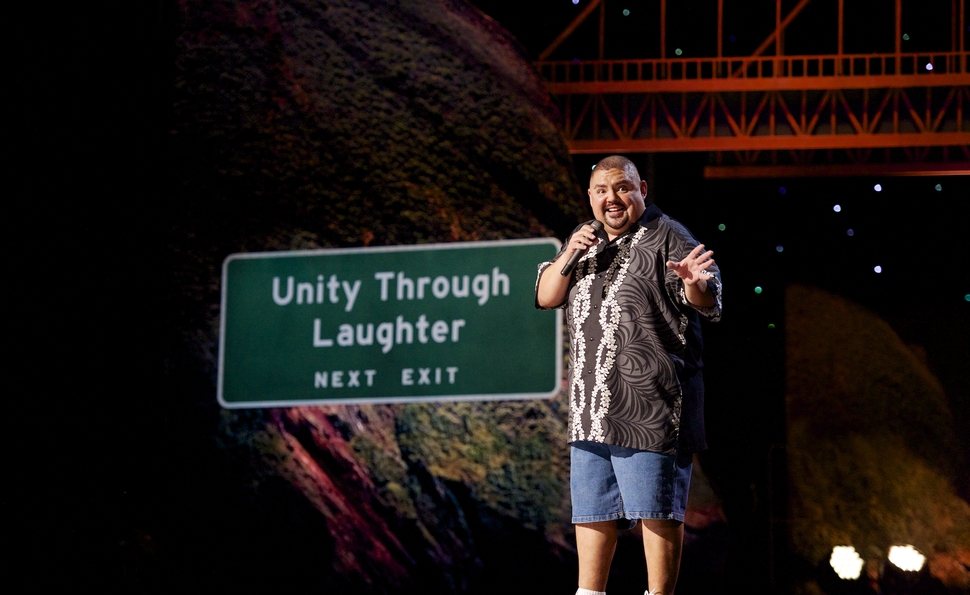 In the hoary tradition of many stand-up comedy films before it, The Fluffy Movie opens not with stand-up comedy, but with an origin story. This one’s mercifully brief, recounting the early years of star Gabriel “Fluffy” Iglesias. We see the plus-sized Iglesias being born, and then as a young boy renting what appears to be a bootleg videocassette of Eddie Murphy Raw (the filmmakers apparently couldn’t even clear the videocassette box for the smash concert film, let alone clips) from a clerk played by Tommy Chong. The butterball child actor playing Iglesias in the segment laughs and laughs and laughs at Murphy’s routine, and then the past gives way to the present: Iglesias enters a massive auditorium in San Jose, standing onstage in front of a replica of the Golden Gate Bridge and a sign quixotically promising “Unity Through Laughter.” The idea is to provide a sense of Iglesias’ history and backstory, especially where his folks are concerned, but the segments are particularly pointless since his actual routine does a much more artful and entertaining job of conveying who Iglesias is as a man and a comedian.

The Fluffy Movie posits Iglesias as a stadium headliner for the raw and confessional Marc Maron/Louis C.K. era of stand-up. Iglesias has the presence and physicality to fill a massive stadium, but also the candor and vulnerability to connect with audiences on an emotional level. The diabetic Iglesias is known for his size: At his heaviest, he weighed over 440 pounds, and one of the first stories he tells in the film is of visiting a doctor for the morbidly obese to discuss a possible gastric bypass surgery with the potential to save his life. There are inspired jokes scattered throughout the bit, like his impersonation of a fellow potential patient so massive he communicates not through words but through whale-like moans, but the jokes never get in the way of the emotions at play, or Iglesias’ very real fear that his weight could cost him his life.

Iglesias ended up losing over 100 pounds without gastric bypass surgery, but fat jokes thankfully take up a small percentage of the film’s running time. Iglesias is never afraid to be vulnerable and open, or to broadcast his fears and insecurities, and many The Fluffy Movie’s funniest and most incisive moments revolve around family.

The star is a storyteller in the classic mode, and many of his anecdotes revolve around the difficulty of connecting with his 16-year-old stepson, who’s separated from him by a generation gap and the innate conflict between surly teens and authority figures. Being a storyteller gives Iglesias the freedom to not be hilarious all the time, to take his time and relish the in-between moments as much as the big laugh lines. Sometimes it takes a long time to get to a particular punchline, but the journey there is always pleasant and honest.

The Fluffy Movie climaxes with a lengthy story (calling it an anecdote wouldn’t do it justice) involving Iglesias meeting the biological father who abandoned him 30 years earlier, the complicated emotions his father’s reappearance engendered, and the way his emotions echoed the emotions of his own stepson when his biological father reemerged around the same time. Iglesias takes his time with the material, confident that he has a closer that ties together everything that’s come before in a way that’s funny, touching, and emotionally satisfying. The closer even comes close to redeeming that stupid opening skit, which depicts his birth and complicated parental situation in a much glibber fashion. Title aside, what distinguishes The Fluffy Movie from a standard stand-up special is its willingness, even eagerness, to dive into some seriously heavy shit. It’s funny, to be sure, but also unexpectedly substantive.