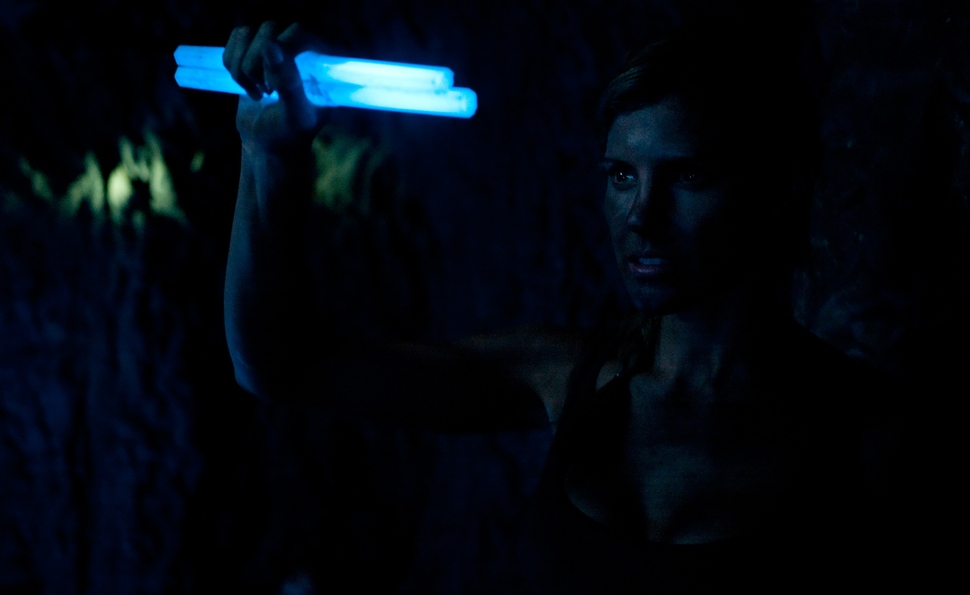 Not to be confused with last year’s horror movie called Beneath, about teenagers being devoured by a giant catfish, this year’s horror movie called Beneath involves a threat from underground rather than from underwater. On the eve of retirement after three decades or so as a miner, George Marsh (Jeff Fahey) celebrates in a bar with a group of his tunnel-happy buddies and his daughter, Samantha (Kelly Noonan), who pointedly goes by the unisex name Sam. Needled by the guys about not having the strength or courage to do what they do for a living, Sam volunteers to descend into the mine the following day—her father’s last—and prove them all wrong. No sooner has she swung her pickaxe a few times, however, than a cave-in traps the entire crew, killing several miners and forcing the survivors to hole up in an emergency shelter while they await what will likely be a slow rescue. But if they’re all inside this oxygen-equipped tent, then who’s making those disturbing noises on the outside?

It’s probably quixotic to expect a horror movie involving miners to be figuratively as well as literally groundbreaking. Still, The Descent demonstrated that claustrophobia plus monsters can be a terrifying combo, so Beneath’s basic premise seems sturdy enough, especially once the miners head out into the tunnels with their flashlights to see what’s what. Unfortunately, the film suggests right from the outset that characters may be hallucinating the scary stuff, due to some sort of ill-defined “bad air” that reportedly doomed another group of miners in the same location decades earlier. There’s a token effort to create some ambiguity about whether some of the miners, both dead and alive, have become zombies, or maybe mutants, or just really damn ugly and homicidal. Given that people’s faces are changing to nightmare visions and then back again in a matter of seconds, however—and only as experienced by Sam—hallucination seems by far the likeliest hypothesis, with random madness a close second. Either way, the strong sense that nothing much is actually happening tends to curtail any gooseflesh.

More troublesome than the lack of scares, though, is the absence of even one remotely interesting character. Noonan gives Sam a welcome tartness in the early scenes above ground, but she’s quickly reduced to a generic panic-stricken scream queen once the mild booga-booga begins. Still, at least she’s identifiable, which is more than can be said for the mostly interchangeable gang of grunts surrounding her. Fahey, who can be a lot of fun if given an opportunity (see Grindhouse), has nothing to do except project weary authority, and everybody else has precisely one dull trait apiece: the nice guy (Joey Kern), the coot (Brent Briscoe), the loose cannon (Eric Etebari), etc. Director Ben Ketai exacerbates the problem by shooting the action realistically, meaning that the film consists almost entirely of people with faces blackened with coal dust, wandering around in almost complete darkness. It’s hard to tell who’s who; it doesn’t really matter, because they’re all equally bland, and the threat these ciphers face is almost certainly nonexistent. It’s just about the perfect formula for tedium. Where’s a giant man-eating catfish when you need one?