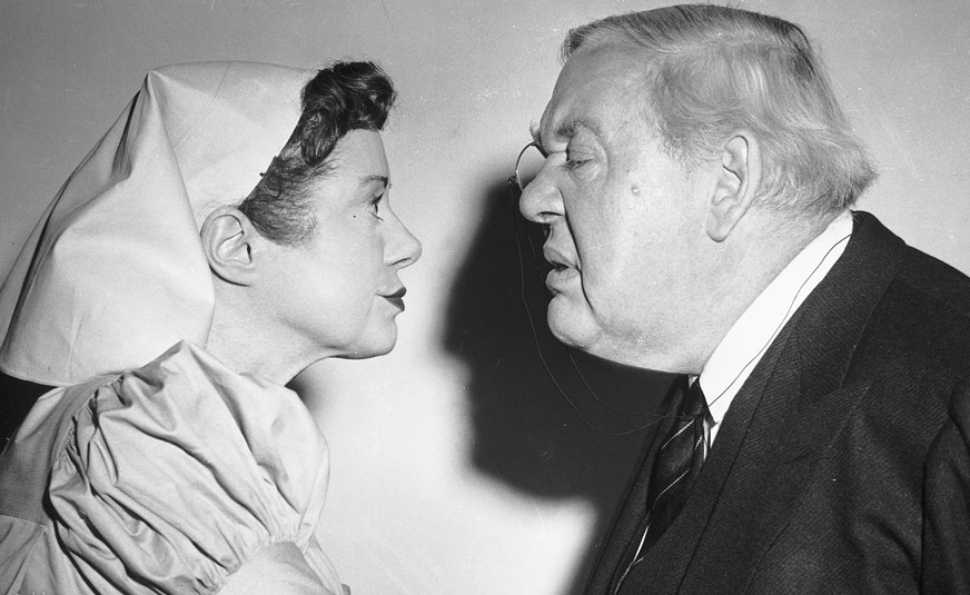 Witness For The Prosecution / The Private Life Of Sherlock Holmes

Billy Wilder arrived in Hollywood in 1933, when he was still in his late 20s, and it didn’t take long before he was writing and directing movies with a distinctly American flavor, marked by slanginess and gusto. But his work retained some qualities that could be characterized as “European,” including a fascination with human mannerisms and a frankness about sex and sexuality. Characters in Wilder’s films aren’t just quirky and lusty; they have appetites that range wide and run deep.

The 1957 mystery Witness For The Prosecution is an unusually straightforward film for Wilder—at least on the surface. Adapting and expanding Agatha Christie’s short story and stage play (with the help of screenwriters Larry Marcus and Harry Kurnitz), Wilder mostly honors what had made the material so popular before he got to it. Charles Laughton plays sickly, surly, quick-witted barrister Sir Wilfrid Robarts, who ignores the advice of his private nurse Miss Plimsoll (Elsa Lanchester) and takes the case of Leonard Vole (Tyrone Power), an American hustler accused of befriending and then murdering wealthy widow Emily French. With the exception of a few flashbacks, the film plays out in long scenes set in offices and courtrooms, carried by the dialogue, the plot, and the wild-card character of Leonard’s common-law wife Christine (Marlene Dietrich).

Witness For The Prosecution has the pace and patience of live theater, but not the look. Wilder doesn’t get overly flashy with camera moves and angles, but he does shift positioning subtly and effectively, moving higher or lower (or closer) to emphasize Robarts’ physical weakness or his powerful legal skills. Laughton, too, plays the material for the screen, often following up a moment of courtroom theatrics with a quiet gesture or facial expression that indicates just how much it’s exhausting Robarts. (The barrister also surreptitiously sips brandy and sneaks puffs of cigars, against doctors’ orders.) But what makes this film more than just an exercise in clever plotting is the way Wilder stages and shoots the flashbacks of Leonard meeting Christine and Leonard visiting Emily. Both scenes are openly informed by sexual desire, with Leonard operating as a cheerful gigolo in the latter, and Leonard trading scoops of instant coffee for Christine’s kisses in the former—and then suggestively asking, “Would you be interested in having the whole tin?”

Robarts exhibits some hostility to women throughout Witness For The Prosecution, but the movie as a whole is more sympathetic, showing Emily, Christine, and Miss Plimsoll as people who suffer due to the caprice and hunger of men. In the Christine flashback, for example, she comes across initially as brashly confident, singing for soldiers in a German nightclub while wearing a men’s pantsuit; but then her confidence gets rattled when one of those soldiers tears her pants and exposes a shapely leg, reducing her to an object. That scene, which comes early in Witness For The Prosecution, establishes an undertone to Christie’s otherwise delightfully easygoing tale of murder and litigation. Regardless of what Christie intended, Wilder’s film is about need.

In 1970, Wilder returned to London for The Private Life Of Sherlock Holmes, another breezy mystery that touches on something deeper. Co-written and co-produced by Wilder and his longtime partner I.A.L. Diamond, The Private Life Of Sherlock Holmes stars Robert Stephens as Arthur Conan Doyle’s master-detective, and Colin Blakely as Dr. Watson, his companion and chronicler. Watson’s narration at the start of the film promises that Private Life is going to get into cases and details that other Holmes stories have left out, because they’re too shocking and bizarre. But instead, the movie mostly consists of one short vignette about a Russian ballerina’s attraction to Holmes, and one longer, fairly conventional adventure that involves a drowning Belgian (Geneviève Page), the Loch Ness monster, Queen Victoria, top-secret military weaponry, and Holmes’ brother Mycroft (Christopher Lee).

If The Private Life Of Sherlock Holmes feels like it’s missing something, that’s because it is. Wilder and Diamond originally had a much more ambitious structure in mind for the film, adding more short mysteries and sketches, along with a framing device. Wilder shot all of that material, too; but his backers had him cut it, reducing a three-hour anthology of stories into a 90-minute mystery and a 30-minute prologue. Without the other mini-adventures and asides, Private Life’s relaxed pace and preoccupation with Watson’s worries about Holmes’ vices comes off as a flaw, instead of as the whole point of the project.

Then again, the many “broken Holmes” reinterpretations that have popped up in recent years suggest that Wilder and Diamond were onto something. The plotting in The Private Life Of Sherlock Holmes is weak, and ill-served by the movie’s generally lackadaisical approach; but the dialogue is witty, and Wilder and Diamond get a lot of mileage out of the idea that Sherlock Holmes is as fragile as he is brilliant. Private Life touches on the hero’s drug addiction, his vanity, and how he makes life difficult for those closest to him, often for no good reason. And the film openly inquires as to what Holmes was into, sexually. Early in Private Life, Holmes complains to Watson that the latter’s stories have made him into something he’s not. But while Holmes wearily insists that, “There are no great crimes any more, Watson,” Wilder and Diamond know that a lack of a crime doesn’t mean there are no mysteries to be solved. For Wilder, the question of what motivates people is one he never stopped trying to answer.

Kino Studio Classics’ Witness For The Prosecution Blu-ray adds five minutes of excerpts from interviews of Wilder by director Volker Schlöndorff, who gets Wilder to talk about Christie’s genius for story construction and her weakness at character construction. The Private Life Of Sherlock Holmes is far more loaded with extras, including a 15-minute interview with Lee (who talks about how working for Wilder changed the course of his career, by proving his versatility), and a 30-minute interview with  the film’s editor Ernest Walter (who explains why huge chunks of it were cut). The disc also adds several of Private Life’s famed deleted scenes, though because not much actual footage survives, they’re mostly presented as script pages, stills, and audio, leaving viewers to solve the mystery of how this film should’ve looked.