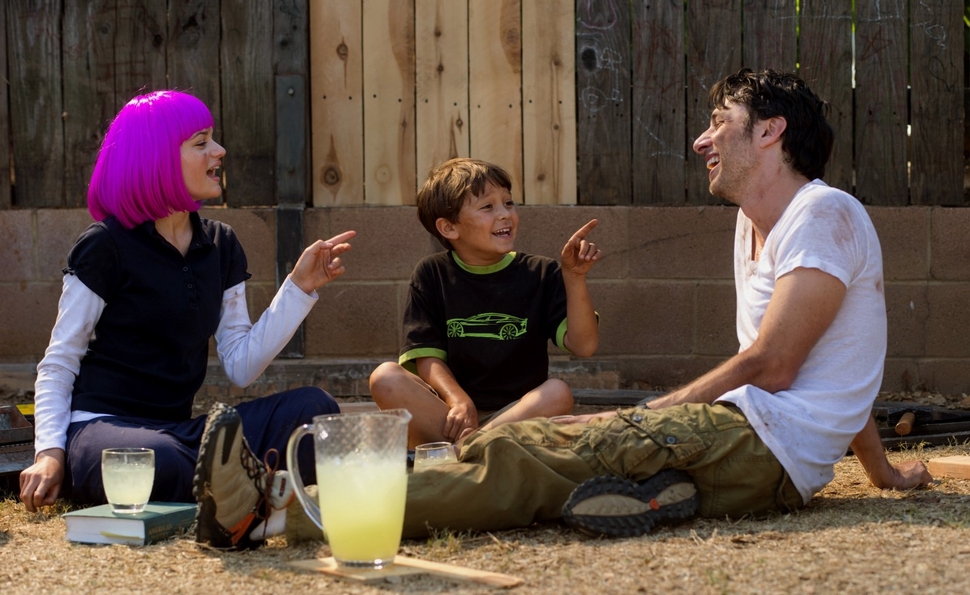 Wish I Was Here

In 2004, Zach Braff made his directorial debut with Garden State, the story of a struggling L.A. actor whose ongoing, ill-defined spiritual crisis comes into focus when he has to travel back to New Jersey after his mother’s death. There, after a careful arrangement of intense personal encounters and swelling indie-rock songs, his protagonist emerges with a greater understanding of what really matters in life, leaving the film wiser to the ways of the world. Ten years on, Braff has changed the setting and rearranged the central relationships, but has otherwise decided to tell much the same story. Rather than a sad, down-on-his-luck single actor, Braff plays Aidan Bloom, a down-on-his-luck married actor. Rather than finding new romance with a selfless woman, Aidan is already married to the impossibly patient Sarah (Kate Hudson). And instead of dealing with his mother’s unexpected death, he’s forced to confront mortality via his father Gabe (Mandy Patinkin), who reveals he’s fighting a losing battle with cancer.

That last detail introduces one new wrinkle into the Braff formula, at least for a while: Because Gabe chooses to pursue some experimental (and dodgy) treatment, he has to stop paying for the yeshiva school attended by Aidan and Sarah’s children, the devout, middle-school-age Grace (Joey King) and her scampish younger brother Tucker (Pierce Gagnon). Already strapped for cash, Aidan has to reconsider his options, and eventually notice that Sarah isn’t exactly thrilled about a breadwinner role that requires her to share a cubicle with a relentless sexual harasser. Meanwhile, Aidan also has to break the news about Gabe to his eccentric brother Noah (Josh Gad), who lives a hermit-like existence by the beach as he pursues a new “career” as a blogger.

Yet after shouldering Aidan with so many responsibilities, Braff (who co-wrote the film with his brother Adam) doesn’t show much interest in making him bear it. The money problems recede into the background after a while. Gabe slips away bit by bit, and in the most peaceful way imaginable. Noah mostly works through his issues on his own time, and the kids are only difficult when the narrative needs them to be; otherwise, they’re content to listen to whatever wisdom their dad wants to impart. Good thing, too, since that leaves room for a lot of soul-searching set to songs both new (Bon Iver), old (Paul Simon’s “Obvious Child,” apparently the go-to montage song of the summer), and in between (Badly Drawn Boy), as Aidan works through the crises at hand, sometimes through poetry. (Wish I Was Here features spoken recitations of both T.S. Eliot’s “The Love Song Of J. Alfred Prufrock” and Robert Frost’s “Mending Wall.” Perhaps there’s a deleted scene with “Because I Could Not Stop For Death” to complete the Intro To Literature In English trifecta.)

Amid it all, Aidan whisks the kids away for a camping trip at a desert spot, where he informs them he once had an epiphany, to which Tucker replies, “What’s an ‘anniph-a-nee?’” Wish I Was Here is so dominated by a sense of smug, unearned wisdom that it doesn’t know how to answer the question. Which is a shame, because it isn’t entirely unwise. A skilled though flash-less technical director, Braff is good with the details of Hollywood, particularly in an early scene that finds him showing up for an audition for a thankless TV part. Not realizing the role has been recast for an African-American actor, he finds a waiting room filled with familiar figures like Leslie David Baker and the late James Avery, all mumbling inane dialogue. When one complains that he once played Othello, another responds, “We all did.” Wish I Was Here also features some nice performances, particularly from Patinkin and the promising King (best known as the kid from White House Down).

Otherwise, the film is as phony as they come. Noah’s blogging mostly consists of obscene Twitter replies to Miley Cyrus, which would read as a joke about Internet culture and his own delusions if the film didn’t play so many other details just as broadly. Sarah’s uncaring boss works beneath a photo of Dick Cheney. Gabe asks Aidan to care for a dog that pees in inappropriate places. An aged rabbi visits a hospital riding a Segway, badly. Noah falls in love with Janine (Ashley Greene), an ill-tempered cosplay enthusiast, which the Braffs seem to think is the same thing as a furry, resulting in one of the summer’s most unforgettable sex scenes. When the film doesn’t strain for twinkly enlightenment, it stoops to find the easiest possible joke.

Wish I Was Here attracted a fair amount of attention, and premature backlash, before it was even made, due to Braff’s decision to fund it using Kickstarter, citing a need for more money for recurring fantasy sequences in which Aidan escapes, Walter Mitty-like, into a world of science-fiction adventure, and because he wanted to maintain final cut over the project. It’s admirable for Braff to want his own vision for the film, but the results reveal that it wasn’t a vision worth fighting for in the first place. “God can be whoever you want Him to be,” a rabbi tells Aidan at one point. That pretty much sums up the mushy feel-goodisms the film peddles as if they were the long-suppressed secrets of the universe, instead of a gob of trite anniph-a-nees.