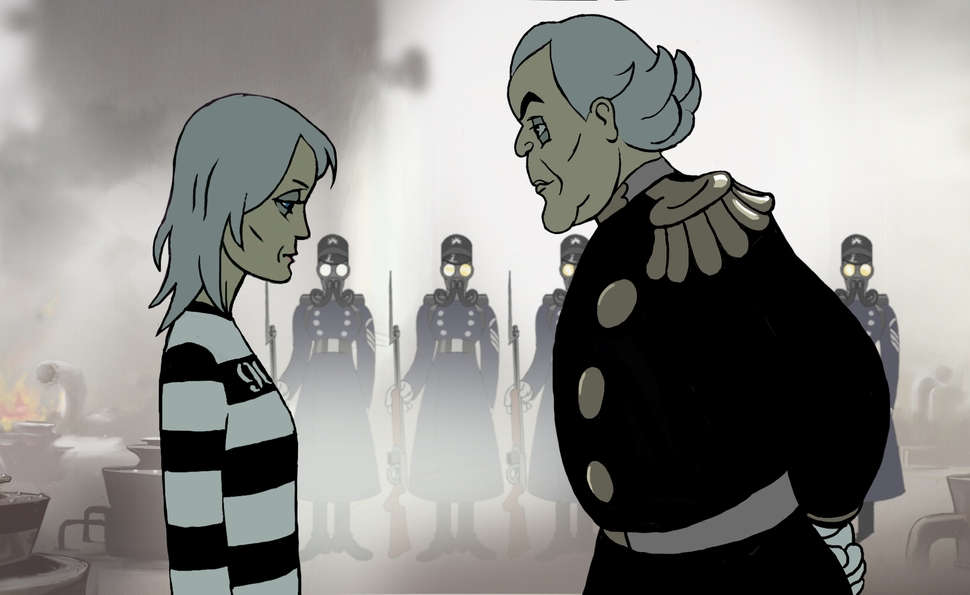 Too much of Ari Folman’s half-animated science-fiction feature The Congress feels just a bit off—but every now and then, the concept, the performances, and Folman’s visual flair combine to produce something extraordinary. In one of the movie’s best scenes, actor Robin Wright—playing a version of herself—sells the rights to her likeness to “Miramount Studios.” She steps into a large, eerily beautiful spherical contraption designed to scan her body language and facial expressions, making a digital Robin that’ll stay young and act in movies as long as the technology is viable. When Robin begins to balk at the procedure, her agent Al (Harvey Keitel) tells her a funny anecdote that soon takes a somber, more personal turn. Throughout, Robin smiles, laughs, looks quizzical, and eventually cries, while the banks of lights inside this wild-looking sphere flash. The image is so strikingly unusual, and Wright is so photogenic, that it doesn’t matter what Keitel is saying—which is fortunate, because his dialogue is terribly overwritten. Whenever The Congress isn’t this visually stunning, the roughness of Folman’s writing becomes more of a distraction.

So it’s to The Congress’ benefit that so much of its second hour is animated. Robin sells her image to Miramount because her career is on the rocks, and her son is having health issues. After the scene in the scanner, The Congress jumps ahead 20 years, to a point in time where the technology for re-creating famous people has advanced, and those who can afford it live in a colorful dreamland of limitless possibility, where they can be surrounded by their favorite characters at all time—or can become them. Robin pays a visit to The Futurological Congress to renew her Miramount contract, which now includes a provision that will allow her essence to be distilled into a chemical people can consume. To attend the conference, she takes a hallucinogen that makes everything look like a cartoon. But then she gets “irreversible hallucinogenic poisoning,” and when the Congress is attacked by terrorists, she’s trapped in a state of constant fantasy, where people ride on giant cockroaches and fingers can become spindly, flowering vines. At its most delirious, The Congress is like Alice In Wonderland filtered through the brainier sensibility of Stanislaw Lem, whose novel The Futurological Congress is one of this movie’s inspirations.

Folman previously made the animated memoir Waltz With Bashir, which was at its best when it was at its most nightmarish, fusing memory with feverish impressions of military combat. The Congress similarly succeeds when it holds closest to Robin’s subconscious, and when she and everyone around her stops talking, and marvels at this unpredictable, often cruel animated universe. When Robin does talk—to her agent, to a venal studio executive (Danny Huston), to a kindly doctor (Paul Giamatti), to a helpful animator (Jon Hamm)—the conversations are often philosophical, asking whether a celebrity has the right to control how her fans fantasize about her, and suggesting that as an actor, Robin should be used to having her image manipulated by someone else. But again, the writing in these extended back-and-forths is so awkward, with everyone using three lines when one will do. The Congress frequently feels way too ponderous, as though Folman were sure he was saying something important with this film, and didn’t want anyone to miss any of it.

Ultimately, The Congress is too uneven a marriage of the pointed and the twisted. The movie feels like it either needs to be truer to reality, with a less broadly satirical take on showbiz, or go all-in on being a psychedelic happening. It’s fun to see an animated, elderly version of Wright driving through a resort city where 20-foot floating billboards show trailers for her digital self’s blockbuster movie series RRR: Rebel Robot Robin, but The Congress is more haunting when the cartoon Robin sings Leonard Cohen’s “If It Be Your Will” in a bar, or when she tries to navigate this fragmented reality so she can get back to her kids. The Congress doesn’t say much of substance about celebrity image or virtual realms, but whenever Folman turns the camera on Robin Wright—live-action or animated—and shows her pining for something she feels is slipping away, the movie becomes emotionally stirring in a way that requires no words.