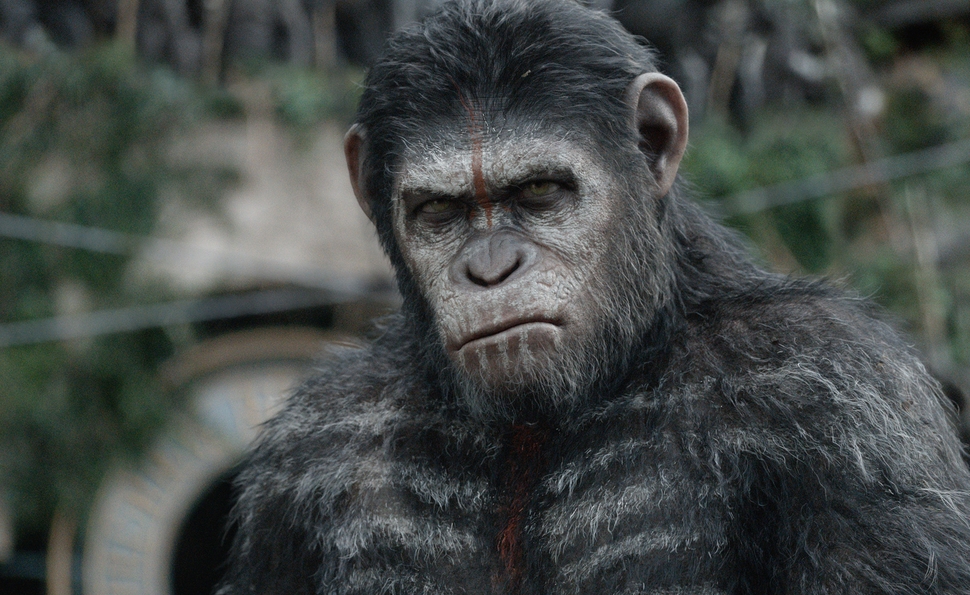 Dawn Of The Planet Of The Apes

Rise Of The Planet Of The Apes didn’t benefit from low expectations in 2011 so much as it blew past any expectations—low, high, or in between. A seemingly unnecessary revival of the Planet Of The Apes series, which ran for five films in the late 1960s and early 1970s prior to a less-beloved Tim Burton “reimagining” in 2001, Rise combined remarkable special effects, a consideration of what divides humanity from the animal kingdom, a motion-capture performance from Andy Serkis as nuanced as any traditional flesh-and-blood acting, and, above all, strong storytelling. Co-starring James Franco as an idealistic scientist who raises a highly intelligent chimp named Caesar (played as an adult by Serkis), only to watch his charge grow independent beyond his expectations—and ultimately beyond his control—Rise begins as a relatively modest story of a man and his super-smart ape. But it expands in scale as it goes along, ending in an extraordinary battle sequence on the Golden Gate Bridge that leaves the future of both apes and humanity an open question.

That’s quite the act to follow, yet Dawn Of The Planet Of The Apes resumes the series with thoughtfulness, confidence, and a determination to not repeat what’s come before. With great economy, an opening sequence charts the spread of Simian Flu and the subsequent eradication of much of humanity, either via the disease itself or the fighting that broke out around it. Dawn then picks up the action 10 years after the first outbreak, and though the film will soon reveal a remaining pocket of humanity, its opening scenes capture a world in which humans no longer matter. Under Caesar’s command, the apes have set up a colony in Muir Woods, living in houses in the trees, hunting deer with weapons, and instructing a new generation of apes in the English language through the tutelage of the gentle orangutan Maurice (Karin Konoval). Above all, they learn that apes shall not harm ape. That seems an unlikely prospect in the early going, which plays out with no dialogue beyond subtitled sign language. Caesar’s son Blue Eyes (Nick Thurston) hunts beside him as his partner gives birth to yet another child. No one wants for anything. All is well.

Then humans enter the scene, and a tense, violent encounter suggests renewed relations between the two species won’t go well. But rather than answer violence with violence, Caesar demands the small party of humans leave. It’s at this point Dawn Of The Planet Of The Apes hits the first of several moments that switch sympathy from one side of the human/ape divide to the other. The chimps had the bad luck to happen upon a trigger-happy member of an expedition, led by the far more reasonable Malcolm (Jason Clarke). They’ve traveled into the woods with a peaceful aims, namely to repair a nearby dam in order to restore power to San Francisco. There a clutch of human survivors living in rapidly degrading conditions under the leadership of Dreyfus (Gary Oldman), a military vet who realizes his continued authority depends on making life better. The encounter ends without further violence, but it alarms both the apes and humans, who become wary of each other from a distance. Dreyfus tells soldiers to prepare for battle, while Caesar finds his authority questioned by Koba (Toby Kebbell), a badly scarred veteran of medical experiments.

Koba nurses a deep disdain for humanity, a viewpoint that proves seductive to Blue Eyes, even though it conflicts with his father’s teachings. It’s also not entirely wrong, given both Koba’s past experience and the swiftness with which the San Franciscans resort to weaponry. Yet Malcolm, his son Alexander (Kodi Smit-McPhee), and second wife Ellie (Keri Russell) invite no less sympathy. They’ve all lost much in the Simian Flu crisis and want mostly to hold on to what they’ve got. Even Dreyfus, whom Oldman portrays with a great deal of gentleness, isn’t really a bad guy. He doesn’t want to go to war, but he does want to keep his people alive. As the situation escalates, Caesar and Malcolm come to understand one another and recognize that both sides risk obliteration if they can’t find a way to forge a peace. They strike a dialogue, yet the sound of fury and gunfire threatens to drown it out.

Stepping in for departing director Rupert Wyatt, Matt Reeves (Cloverfield, Let Me In) retains Wyatt’s strong command of visuals, making Dawn’s Muir look Edenic and its San Francisco a suitable place for humanity to wind down a troubled reign as Earth’s rulers. He’s skilled at choreographing action scenes, one of which includes a breathtaking unbroken shot from the turret of a tank, but also at capturing the tension of quieter moments. As Caesar and Koba debate in the foreground, other dramas play out in the background among those paying attention to the shifting political winds.

Such shots complement a script—by producers and returning screenwriters Rick Jaffa and Amanda Silver, working with Mark Bomback—that pairs strong storytelling with nuance and ambiguity. This is a film in which apes ride horses and shoot machine guns, sure, but also one that creates and deftly navigates a delicate political situation with strong parallels to real-world global hotspots, particularly the seemingly endless conflict in Israel and Palestine, where every step toward peace keeps getting dragged back by bloodshed. (That Dawn finds this in a story inspired by Battle For The Planet Of The Apes, the last and least of the original series, makes it even more of an achievement.) The cast conveys the gravity of the situation, particularly Serkis in another extraordinary performance. Where the last film saw Caesar come of age, and come into his own, this one finds him burdened by his own principles, and made into a richer, sadder character by seeing the way those principles don’t work out in the real world.

Yet for all the heady ideas at play, Dawn Of The Planet Of The Apes remains a visceral film, one of movement, action, unexpected developments, and disarming poignance. As in Rise, the apes have heft and presence thanks to superb effects work and the performances of those animating them via motion-capture. (After Serkis, Kebbell stands out, particularly in scenes that find him engaging in stereotypical chimp behavior to win the trust of some dimwitted men with guns.) When they pound one another or fall in battle, the film makes the impacts register. And as in the best Planet Of The Apes films, Dawn creates a sense that, however far-fetched its premise, what happens here matters, that no less than the fate of the Earth will be determined by the choices its characters, apes and humans alike, make in their respective struggles to live another day.

GoWatchIt: Buy. Rent. Stream Dawn Of The Planet Of The Apes