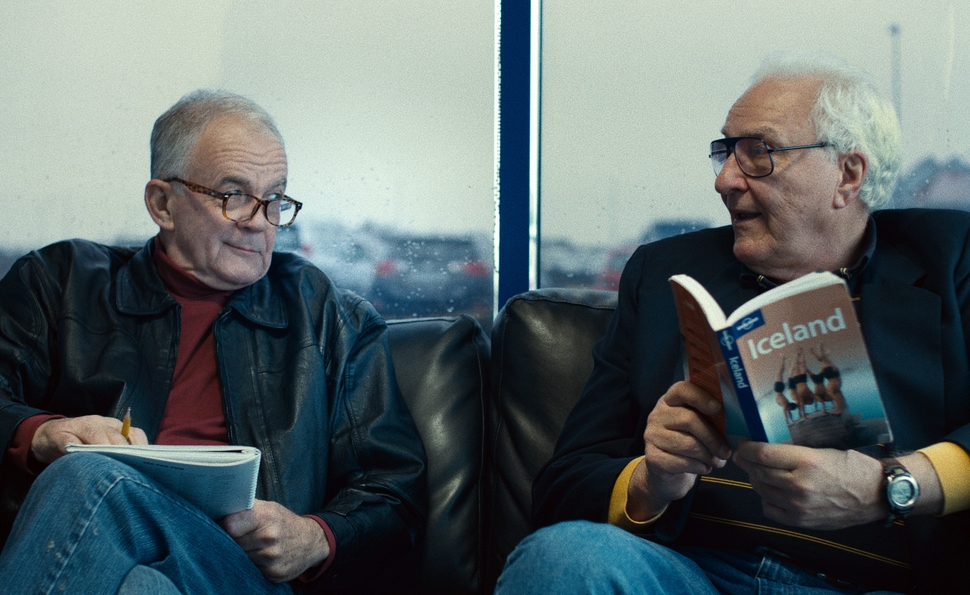 It’s hard to pinpoint when exactly “getting your groove back” movies became their own cinematic subgenre, but it’s easy to understand why filmmakers have become so fond of narratives about people shaking out of their stupors and rediscovering their zest for life. It’s the cleanest arc imaginable—the world is an incredible place, and it’s easy enough to re-open someone’s eyes to that, particularly if you can roll credits before the subject has time to come back down to earth and grow tired of their new perspective. (American Beauty, whatever its faults, has the good sense to cap Lester Burnham’s reawakening with a bloody exclamation point instead of an ellipsis.)

Martha Stephens and Aaron Katz’s fitfully fun Land Ho! preaches that same old sermon—“You’re never too old to live in the moment”—in the shape of a picaresque road trip. Mitch (Earl Lynn Nelson) and Colin (Paul Eenhoorn) are 60-something ex-brothers-in-law who, after a brief dinnertime discussion in which the former registers his disappointment about the size of Meg Ryan’s breasts, abruptly head off to Iceland for a revitalizing getaway.

Mitch is a horny bayou boy exuding the sexual shamelessness of a man who knows he’s too old for most women to see as either an option or a threat. A surgeon who’s suspiciously quick to brush off talk of retirement, Mitch speaks in a delightfully slow Louisiana drawl, his voice thick with vulgarity. Naturally, he makes for an amusing contrast with the sober, comparatively severe Colin, a resigned widower whose terse Australian accent almost defaults him to being the straight man of this shambling comedy. Alone, each man is, well, alone. But together, they might just leverage each other into new happiness.

Land Ho! debuted at Sundance a mere 12 months after the idea for the film first crystallized in Stephens’ head, and much of the finished product’s charm can be traced to how it doesn’t try to hide the impromptu nature of its creation. Although beautifully shot on Red One cameras by Katz’s longtime cinematographer, Andrew Reed, and glazed with a batch of synth-pop confections by Keegan DeWitt, the film is fundamentally committed to the shaggy “go with the flow” vibe of a good vacation. The first half of this aggressively unhurried 95 minutes plays like Last Vegas with a lighter touch, while the back end, in which the boys rent a Hummer and drive Iceland’s famous Ring Road, is more akin to a distant sequel of The Trip, happy to earn occasional smiles where Michael Winterbottom’s road comedy goes for belly-laughs.

It would be difficult to divine the line between the two directors’ separate contributions, but Katz and Stephens’ previous films have evinced a common gift for weaponizing modest storytelling. Their best movies (Cold Weather and Pilgrim Song, respectively) like digital sieves that pan through humdrum everyday life to find what it leaves behind. While Land Ho! feels like a direct extension of its characters, with sedate compositions that are a far cry from the youthful opportunism steering the camera in Katz’s previous films, the uncharacteristic transparency of its agenda clashes with the joy of discovery its story craves.

The film has the deceptively difficult task of showing how easy it can be to shake off a stupor, how the moment is always waiting to be seized. But Nelson (a retired oculoplastic surgeon) and Eenhorn (a lifelong actor enjoying a newfound film career after the success of Chad Hartigan’s This Is Martin Bonner) are such perfect opposites that merely appearing together onscreen is enough to incite a molecular change in their characters. The two men share a chemistry so exquisite that their trip seems almost unnecessary, and the film’s various episodes, while always endearing, are seldom funny or wistful enough to justify belaboring its purpose. The people Mitch and Colin encounter along the way are too perfectly premeditated, and the moments they share with them are never surprising. The journey is the destination, of course, especially for men driving around a country in a giant circle. But that doesn’t mean the film should end exactly where it began.