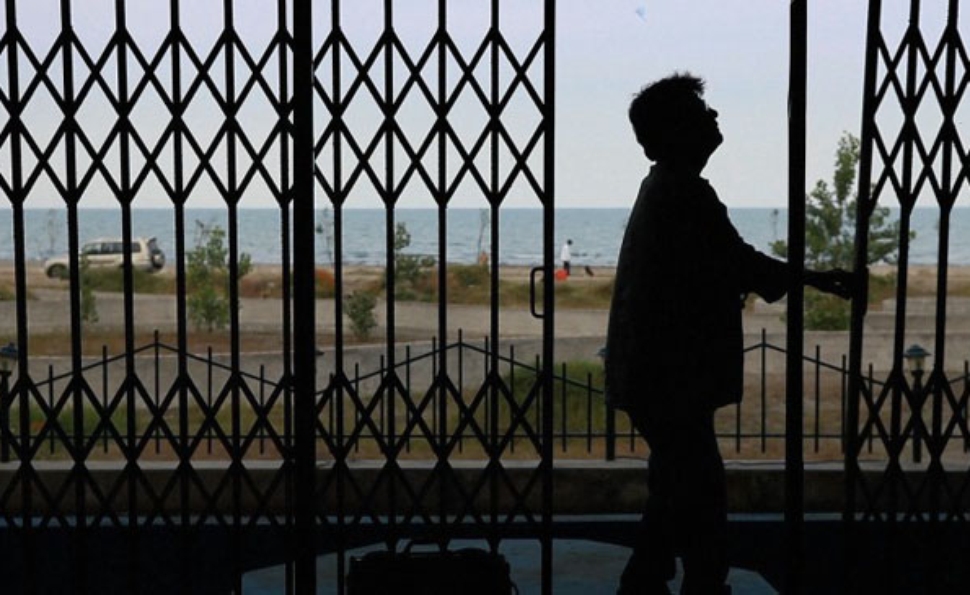 In December 2010, Iranian director Jafar Panahi was convicted of “assembly and colluding with the intention to commit crimes against the country’s national security and propaganda against the Islamic Republic.” The price for the dissident artist—who rightly won international acclaim for structurally inventive, often defiantly political films like The White Balloon, The Circle, Crimson Gold, and Offside—was severe: Six years in prison, plus a 20-year ban on writing, directing, giving interviews, or leaving the country. Panahi being Panahi, he has since made two features. Shot in his apartment as he was awaiting his appeal, 2010’s cheekily titled This Is Not A Film stands as a remarkable record of his confinement, an essay film that documents his current life while stoking the undying embers of his creative mind. In its centerpiece, Panahi blocks out a space on the floor in white tape and acts out scenes from a screenplay that will never be officially realized—that is, unless he wants to take it up again when he’s 70, when the ban would end.

Yet here Panahi is again with Closed Curtain, another self-reflexive piece of house-arrest theater that edges more ambitiously into fiction—or at least the blurry line between reality and creative fantasy. Panahi remains under house arrest; as he describes it to Eric Kohn of Indiewire, “They let me out of a small prison and released me into a much larger one,” which means he currently has the “freedom” to defy the ban by making surreptitious projects like this one, but not the freedom to make movies like he did in the past. (Both This Is Not A Film and Closed Curtain were smuggled out of the country, the former in a zip drive tucked in a cake.) Panahi’s frustration and mental duress come through as strongly in Closed Curtain as they did in This Is Not A Film, but in the context of a much more abstract, difficult piece of work, one that channels the spirit of Pirandello’s Six Characters In Search Of An Author.

Co-directed by Kambuzia Partovi, from Panahi’s script, the film opens with a long take from inside a villa near the Caspian Sea. Through the frame-filling bay windows, the water can be glimpsed from a distance, but the view is obscured by the iron latticework of a gate and fence just behind it; later, an opaque black curtain is tacked up over this and all the other windows, allowing no sight (or light) in or out. Playing an unnamed writer—and an obvious stand-in for Panahi—Partovi has fled to the villa with his delightful dog, Boy. Under the fundamentalist regime, dogs have been declared unclean, and the writer has smuggled this frisky contraband to the villa to save it from extermination. (The buoyant, playful pup justifies the risk by proving to be one of the all-time great screen dogs.)

One night, a mysterious young woman named Melika (Maryam Moqadam) and Reza (Hadi Saeedi), a man claiming to be her brother, slip in through the front door. The writer has no idea who they are or even how they got in the house, but they’re on the run from the authorities, too. Reza leaves Melika behind to find someone with a car to pick them up, and the writer reluctantly takes her in, under the warning that she’s suicidal. The two have a conversation and she disappears as abruptly and mysteriously as she arrived. Then Jafar Panahi himself wanders in.

At this point, Closed Curtain takes a turn toward the navel, as Panahi asks the audience to question its assumptions about what happened earlier, and again reflect on his artistic dilemma. These are at least a few characters (and a dog) in search of an author, each a symbolic representation of Panahi’s restless conscience and competing impulses. (Melika suggests suicide as an exit, but Partovi, as Panahi’s alter ego, dismisses the thought.) The two halves of Closed Curtain complement each other, but the first is more compelling than the second, partly because the mysteries of construction trump the grind of deconstruction, and partly because Panahi channeled his anguish more directly and affectingly with This Is Not A Film.

Still, there’s a lot to the gamesmanship of Closed Curtain: the interplay between documentary and fiction, the life of the artist’s mind, the palpable despair of a filmmaker who can only express himself within a small box. Panahi finds clever ways to work around the conditions of his sentence—in lieu of traveling to last year’s Karlovy Vary Film Festival, he conducted a Q&A via Skype—but he’s not alone in feeling the limits of his current situation. His sense of creative suffocation is the text of both This Is Not A Film and Closed Curtain, but for fans of his earlier work, it’s getting harder to watch these films (or not-a-films) without pining for Panahi to break out, too. He needs to work again on a proper production. Soon.