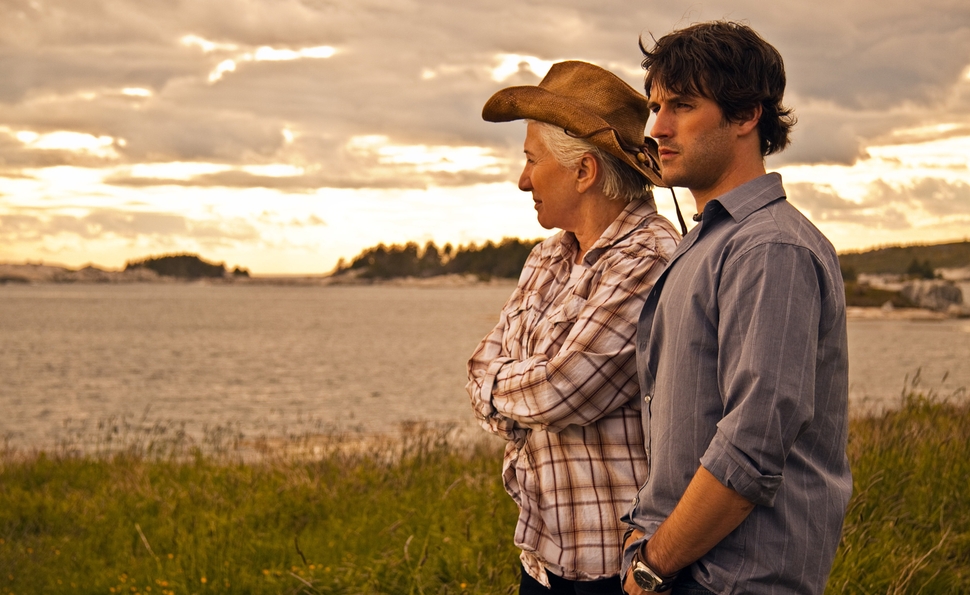 Cloudburst has several such moments of authentic, easy emotion, where writer-director Thom Fitzgerald, who first produced his story as a stage play, simply observes the central couple. Those scenes suggest a much stronger movie, one not weighted down with corny tropes, painfully on-the-nose dialogue, and oppressive levels of quirk. The fact that the dotty, periodically helpless member of the duo is actually named Dotty says everything about the overly literal script and the way it lumbers through the frame story that puts its protagonists on the road together.

The loose-limbed opening establishes that Dotty is infirm and nearly blind, and the more capable Stella has been taking care of her for years. But Dotty’s adult granddaughter Molly (Kristin Booth) is oblivious about their relationship, and when that vibrator-chasing incident makes Dotty fall off the bed and strain her arm, Molly consigns her to an elder-care facility for the mentally ill. Molly is a chipper, one-dimensional villain: She gallantly lets Stella know she can stay in Dotty’s house “for as long as it takes for you to make other arrangements,” and when a less-clueless bystander explains that she’s broken up a longtime couple, she laughs it off—after all, her mother’s existence proves grandma isn’t gay. Faced with Stella’s shrill, furious resistance, Molly lies to Dotty to get her signature on power-of-attorney papers, leaving Stella with no recourse but to break Dotty out of her new home so they can flee to Canada, get married, and hopefully get taken seriously as partners.

Cloudburst follows a clear Thelma & Louise track, as the ladies set out on a picaresque road trip with an APB out for their return, and rapidly pick up their own Brad Pitt. He comes in the form of hitchhiker Prentice (Ryan Doucette), a self-described New York dancer—and apparent hustler, gauging by the way he meaningfully edges his waistband down to nearly groin level when trying to tempt Stella into giving him a lift. (“Pull up your pants, kid, you’re humping the wrong fire hydrant,” she snorts.) But where Thelma & Louise cranked up the pace and the gonzo adventure, Cloudburst stays the course as an easygoing ramble, full of snark, sentimentality, and Canadian country music.

But in spite of some lovely interludes together, and note-perfect performances from Dukakis and Fricker, Dotty and Stella are frustrating stereotypes. The former is the sympathy-inducing old biddy who’s losing control of her wits and body—except whenever a scene requires her to sharply dispense wisdom, banter, or discipline. Stella, meanwhile, is the fiery, irascible, but adorable old bat who chugs tequila and swears colorfully and creatively, as when she lectures a prudish stranger on the glory of cunt, both the word and the anatomy. “If I were on death row, I’d request my final meal be right between k.d. lang’s legs,” she tells Prentice, possibly trying to shock him, but mostly because she has no filters or sense of boundaries. On their own, both characters are chokingly precious and whimsical. So is Prentice, the kind of daft, hard-to-swallow free spirit who halts a funeral so he can perform an interpretive dance on the grave.

Fitzgerald has a longstanding creative relationship with Dukakis, whom he also directed in other Canadian or Canada/U.S.-supported productions, including 2003’s The Event, 2005’s 3 Needles, and the upcoming Canadian TV series Sex & Violence. He created the role for her, which explains how flawlessly she fits the salty, snappish part. But too much of the film around her and Fricker is mawkish or contrived, like the scene in which Dotty, conveniently back in woolly-headed mode, is hauled off to the home, with Molly reassuring her that she isn’t being taken away to be cremated—at least “not right away.” And it can be profoundly crass, particularly in Stella’s startlingly explicit language, or the baffling protracted scene where Dotty accidentally gets into bed with a naked man, whose genitals end up in her hand, on her face, and eventually flattened against the windshield of Stella’s truck. This is a movie that feels like The Straight Story or Away From Her in one moment, and like Borat the next. In its peaceful moments, it’s a gem, but the wild stabs at wacky comedy are usually groaners, a shame in a story that’s so smart and savvy when it isn’t showing off, being dense, or winding down to a painfully pat ending. The movie’s overt message is that if the world had any common decency, everyone would stop interfering with these two sweet old lovers, and let them enjoy their perfectly functional relationship in peace. The film is by far at its best when it does likewise.