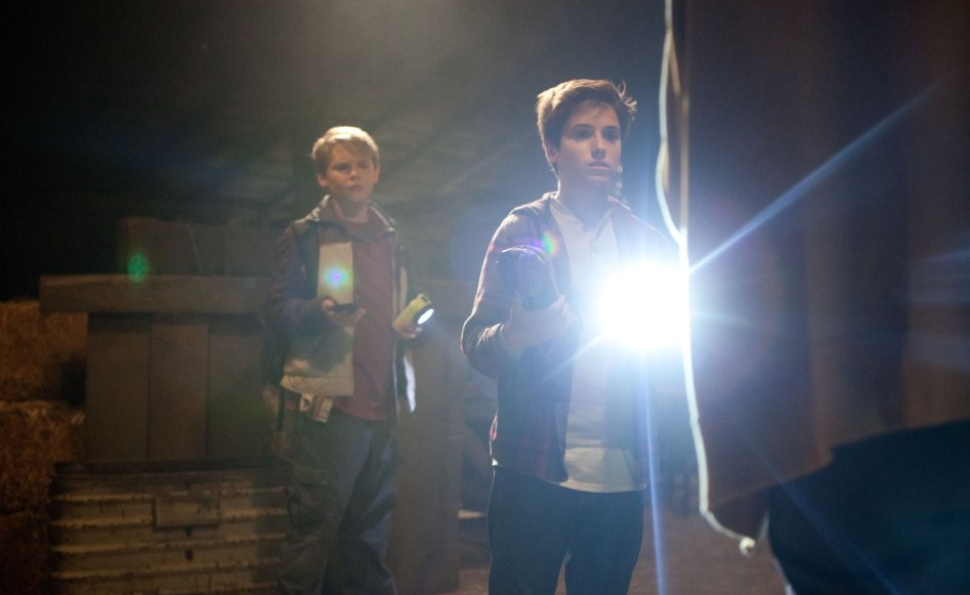 Since Steven Spielberg helped make American suburbia a place of wonder—and sometimes terror—in films like Close Encounters Of The Third Kind, E.T., Poltergeist, and The Goonies (he executive-produced the latter two), he hasn’t suffered for a want of imitators attempting to do the same. Some of those imitators fare better than others. Whatever its other problems—and the shrug of a finale is certainly an issue—J.J. Abrams’ Super 8 at least precisely picked up the twinkly tone that suggested any kids’ neighborhood could become the scene of something extraordinary. (Spielberg produced that, too, which probably didn’t hurt.) The new Earth To Echo, on the other hand, struggles to do the same.

There are a number of reasons for this, starting with the fine line that divides homage from rip-off. Set in a hilly Las Vegas suburb, the film follows three close friends in their early teens who are about to be displaced by a quickly announced freeway expansion, one being conducted by some shifty-looking construction workers. Instead of watching The Goonies, whose heroes struggled against a similarly inconsiderate country club, for tips on fighting against displacement, they spend their last days together investigating a mysterious force causing their cell phones to be covered in electronic “barf.” Eventually, they discover that a tiny, injured space creature whom they name Echo has been signaling to them for help. Echo looks like a robot, though he insists he’s not, and he needs to gather a few key parts to head home. (Since he has his own ship, albeit a broken one, phoning for a lift isn’t necessary.)

This brazen summoning of ghosts of Spielberg movies past might have worked if  director Dave Green, making his feature directing debut, had the classic technical chops to pull it off. And maybe he does. That’s a question another movie will have to answer, however, since Earth To Echo is yet another found-footage film, and not a particularly inventive one at that. Here it’s Tuck (Astro), the shutterbug of the bunch, doing most of the shooting with a camcorder, a bike-mounted camera, and a pair of spy glasses. Instead of finding any new twists on the approach—beyond playing, in its spookier moments, like A Child’s First Blair Witch Project Knock-Off—Green mostly stages scenes for maximum chaos. There’s a lot of running around, blurred images, and screaming, with little standing around in awe.

That shortage extends to the scenes with Echo himself. (Itself?) Echo is a cute little alien that looks a little like the mechanical owl from the original Clash Of The Titans. Echo doesn’t get a lot of screen time, however, which seems more like the result of a limited budget than an attempt to create suspense. Echo also never develops much of a relationship with the kids, who also include Alex (Teo Halm, as the tough kid with a troubled past), Munch (Reese Hartwig, as the token dork), and Emma (Ella Wahlestedt, as Elle Fanning in Super 8). But then, the kids don’t really have much of a relationship with each other, either. Despite a voiceover that talks (and talks) about their deep bond, the young actors never flesh out their flat characters. A Spielberg take on the same material, or even that of a skilled Spielberg imitator, would have started with that, then worked up toward the stars.