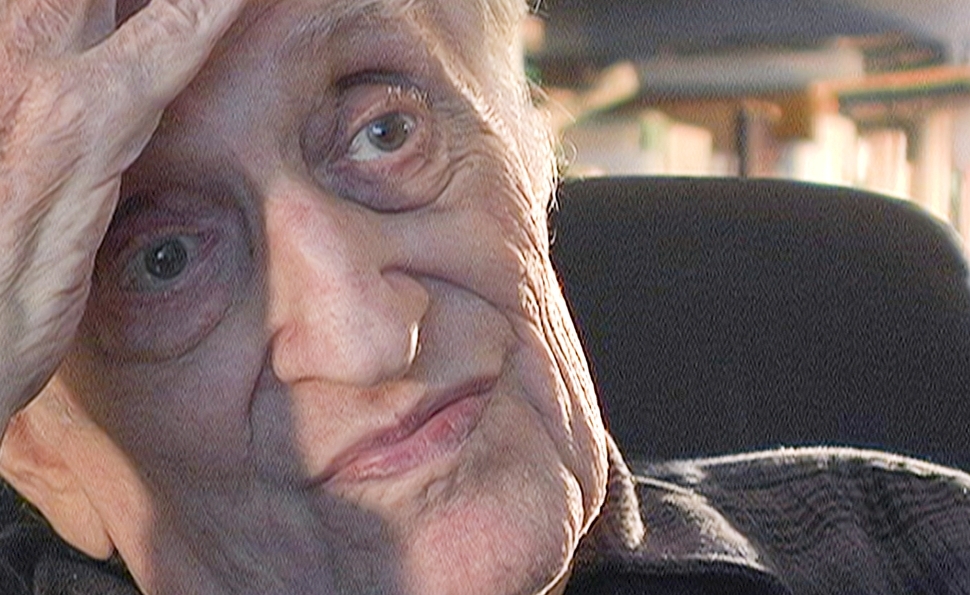 “I’m interested in your experience,” Alan Berliner tells his mother’s aged cousin, Edwin Honig, early in the film First Cousin Once Removed. “What it’s like to be you, right now.” Berliner is saying this in front of a camera, as part of a series of visits he made with Honig over the course of five years, while Honig’s mental faculties were being worn away by Alzheimer’s. Before the disease took hold, Honig was an esteemed professor and poet who translated great works into other languages, and was knighted in two countries. Berliner felt the teacher should keep teaching, to show the world what it’s like to live on with no memory of the past. The result of Berliner’s exercise is a documentary portrait of Honig at the end of his life, and a film that puts the poet’s state of constant “now” in the context of the brilliant but sometimes cruel man he used to be.

One of Berliner’s relatives warns him that this would be a tough subject. (“People both want to see it and don’t want to see it,” she says in the film, off-camera.) Another complains that Berliner’s project is “demeaning” to a great man, while still another defends the documentary, saying Honig himself would’ve found it fascinating. All these people are right, to some extent. First Cousin Once Removed doesn’t come across as overly demeaning or exploitative, because Berliner himself is so kind to Honig in their meetings. But it’s hard to deny that Berliner is using Honig’s deteriorating condition as fodder for his art, just as it’s hard to deny that Berliner’s willingness to risk that criticism is what makes First Cousin Once Removed such a great film, and one that’s less of a chore than the description “man documents his cousin’s descent into Alzheimer’s” might make it seem.

The most important thing to know about First Cousin Once Removed is that it isn’t linear. Because Berliner is more an essayist than a journalist, he cuts between the footage of his various visits with Honig, arranging the documentary by topic instead of showing Honig falling apart piece by piece. First Cousin Once Removed covers Honig’s childhood, his career, his two marriages, and his two adopted children, bringing in interviews with family and colleagues, and old films and photographs, to present a fuller picture of who Honig was before the disease overtook him. And it isn’t always pretty. Honig’s son and his ex-wife describe how he changed as the boys grew up—starting out as affectionate and full of joy, then turning cold, distant, and mean, constantly criticizing his kids for not being smart enough.

The section of First Cousin Once Removed having to do with Honig’s less-than-exemplary parenting is central to what the movie as a whole is about. How did Honig go from being one kind of dad to another? Where did the loving Honig go? Berliner employs some more avant-garde film techniques to riff on these ideas, using onscreen text, rhyming images, and visual motifs (trains and typewriters are both major ones) to create a sense of continuity between all the different versions of “Edwin Honig” that the movie depicts. The cutting between interviews and eras works so well because it’s disorienting, making it harder to answer the question, “When did Honig stop being Honig?” It’s always startling in First Cousin Once Removed when Berliner goes from showing a man so out of it that he can only make musical sounds to showing someone still gentlemanly and eloquent, even though he doesn’t really know who Berliner is.

First Cousin Once Removed marvels at how a man with no memory of his past achievements can still turn a phrase, and describe the world so precisely. For most of the years leading up to his 2011 death, Honig stared out a window, and when pressed by Berliner, Honig explains, “‘Time now to me is what I do when I sit in a chair,” and, “Getting to know these trees has meant a great deal to me.” Toward the end of one of their sessions, a tired Honig sends Berliner on his way, but before the old man drifts off to sleep, he mutters, “I like the way the sky changes. It twists from one sky to another.” This haunting film isn’t so much about the twisting as it is about the sky.

Unlike popular HBO original series—which come out on extras-packed, beautifully packaged, heavily promoted Blu-rays—the channel’s documentaries generally get released quietly on bare-bones DVDs. First Cousin Once Removed is an exception. It’s still only on DVD (no Blu-ray), but the disc adds a 45-minute onstage Q&A between Berliner and Richard Peña, in which the filmmaker talks at length about his editing process, plus an hour of excerpts from a 2011 memorial tribute to Honig. And in a kind of distilled and remixed version of the main feature, Berliner tacks on the four-minute short film “56 Ways Of Saying I Don’t Remember,” which cuts together moments from Berliner’s footage where Honig admits—sometimes bluntly, sometimes apologetically, and sometimes poetically—that he can’t answer his cousin’s questions.