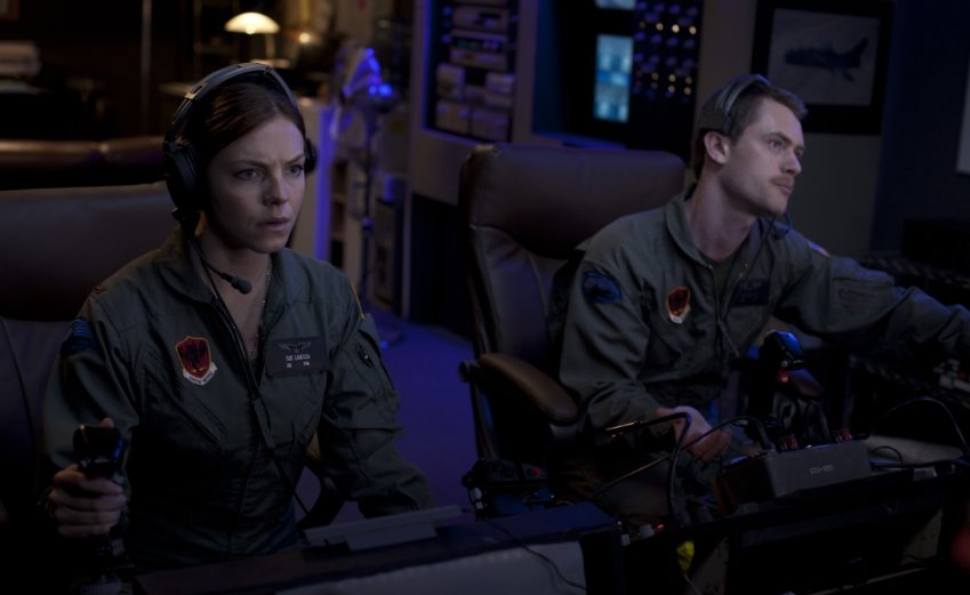 According to The Bureau Of Investigative Journalism, the Obama administration has reportedly launched 390 surreptitious drone strikes against purported enemies in Pakistan, Somalia, and Yemen, killing 2,400 people, including 273 civilians. The polemical debate over whether drone usage is ethical and effective is at the heart of Rick Rosenthal’s Drones. But Rosenthal undercuts the magnitude of these murky issues by tackling them without the necessary subtlety and dexterity.

After being dismissed from flight school due to a detached retina, Sue Lawson (Eloise Mumford) is relegated to working as a drone pilot with cocksure Jack Bowles (Matt O’Leary). The film opens on Sue’s first day in a claustrophobic, humid trailer in the middle of a Nevada desert. For the next 90 minutes, Drones stays primarily within these Air Force-run confines, occasionally interspersing aerial shots of the home Jack and Sue have been assigned to monitor for potential terrorists.

Amid waiting around for possible criminals to pop into their monitors, Jack and Sue have conversations that rapidly oscillate in sincerity (and intelligence) from minute to minute. In one sequence, Jack explains that his last partner on the job mysteriously committed suicide after a successful mission. That sort of serious discourse, which later extends to everything from morality to military conspiracies, is often devalued by asinine exchanges like this:

Sue: Are you sure about that?

Jack: Not like guys. I mean, my dad left my mom when I was 3, and I tracked him down about a year ago, so I asked him, “Why did you leave my mom?” And he looks at me and he says, “Because she’s a fucking porker.” Now, I love my mom, don’t get me wrong, but what could I say to that? I mean my mom makes Lady Abdul over here look like Cleopatra. I bet your mom’s not fat.

Drones is in constant combat against itself, poorly balancing searing commentary on excessive drone use and rampant stupidity like the dialogue above. Even as the tension rises when Jack and Sue discover a prospective 9/11 conspirator at the hut they’re surveilling, Rosenthal struggles to tactfully make the film he wants to make. What initially begins as a thoughtful examination on the war in the sky quickly dissolves into a torpid thriller in which superior officers order Jack and Sue to assassinate an ostensible al-Qaeda operative, despite the innocents in his immediate vicinity. The basic moral dilemma: Do the protagonists value human life, or trust in the mission?

All this material would likely be better suited for the stage, where screenwriter Matt Witten got his start. And as with any story confined to one space, the quality of the movie is entirely predicated on the actors occupying that space. But Mumford and O’Leary turn in equally uninspired and amateurish performances, though the slipshod writing deserves a portion of the blame. The value of the characters’ opinions actively diminishes as Drones trudges onward. From one scene to the next, they flip-flop on their political positions as frequently as presidential candidates. It’s hard to care about what characters have to say when an amorphous script forces them to abandon their ideologies on a whim.

By the end, Drones draws a definitive conclusion that, contrary to what’s preceded, manages to stay non-partisan: When it comes to drone operations, this is a multi-faceted situation that places an unwieldy amount of responsibility on soldiers like Jack and Sue, who are tasked with playing judge, jury, and executioner every single day of duty. Rosenthal and Witten come to this rationale organically, and it’s one of the few instances in which the film exhibits thought and pragmatism. But one coherent point can’t rectify the damage done by a sea of mystifying misfires. Topical as it may be, Drones consistently manages to undermine the points it presumes to be making.