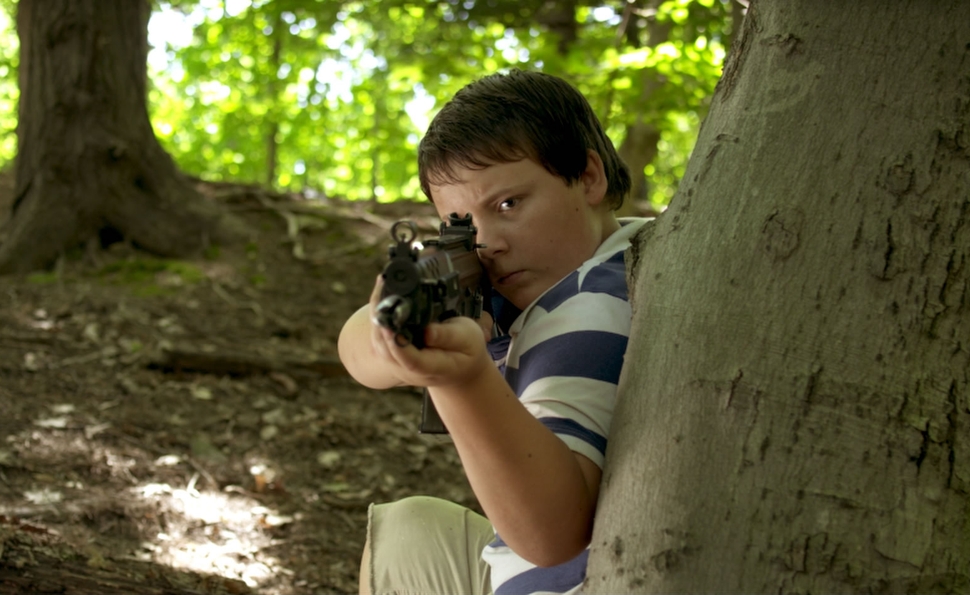 General Patton wears a retainer in I Declare War, a dark comedy of pre-adolescent hurt and aggression that plays like an unstable mix of Lord Of The Flies, William Golding’s classic allegory about the thin line between civilization and savagery, and Tag: The Assassination Game, a little-seen and little-loved 1982 thriller about a campus suction-cup dart game turned deadly. All of these stories are about how human beings act when rules aren’t obeyed and order breaks down, but I Declare War writer/co-director Jason Lepeyre and his directing partner Robert Wilson take much of the allegorical sting out of Golding’s work. They aren’t interested in making larger statements about civilization and government, or even smaller ones about the brutality at the heart of man. They’ve made a film that seizes explicitly on childhood fears, insecurities, and imagination, turning them into a mostly clever, cult-minded throwback to 1980s boy-bonding adventures like The Goonies and Stand By Me.

“This is the first real war I’ve ever fought,” says P.K. (Gage Munroe), a master tactician who has never failed to lead his juice-box brigade to victory in capture-the-flag. P.K. utters those words with a hard stare into the middle distance, looking as if he’s about to take a long drag off a cigarette, but even barking orders in his flak jacket, the little runt appears at least a year or two away from puberty. Squaring off against Quinn (Aidan Gouveia), his opposing general on a hot summer afternoon, P.K. worries that he’s finally met his match, but soon enough, the rules go out the window. And what are those rules?

Chaos descends on the event almost immediately when Skinner (Michael Friend), a militant bully on Quinn’s team, tries to interrogate a “dead” adversary by kicking him in the ribs. (In Lord Of The Flies, Skinner would be equivalent to Jack, the hunter who defies the leader and wins loyalty through power and aggression over reason.) Skinner also tries the unconventional move of capturing—rather than “killing”—Kwon (Siam Yu), P.K.’s best friend and right hand, and using a torture method so excruciating that it was “used to kill people before hanging was invented.” Skinner willfully discards the rules that make the game a game, raising the stakes in a different way, bringing actual brutality and violence into the mix. And hurt feelings, too.

In a shock effect that never quite loses its bite, I Declare War toggles back and forth between fantasy and reality, with wooden machine guns and D-battery-stocked ammunition belts suddenly changing into real artillery and bullet fire. Lapeyre and Wilson are trying to suggest the fierce battles raging in the kids’ imaginations, but that doesn’t blunt the impact of children armed to the teeth with deadly weaponry, especially once the danger of actual harm becomes real. To the filmmakers’ credit, I Declare War seems edgier and more violent than The Hunger Games, despite the lack of bullets in the chambers, fire in the grenades, or kids trying to kill each other, at least deliberately. Such is the power of the movies that their illusions become ours.

Lapeyre and Wilson have a wonderful time with the dialogue, which ranges from hilarious schoolyard braggadocio (“This is war, man. Not fucking hopscotch.”) to the types of circular arguments (“Did so!” “Did not!” “Did so!”) that typically end with “infinity” or “infinity plus one.” They’re particularly smart about the silly hypotheticals that kids propose to each other during idle hangout time, like, “What if God said you had to engage in coprophagia or get kicked out of the church?” or “If you could be the most famous, richest, most loved person on earth, but had to stick your dick in a dog’s mouth, would you do it?” (Best possible answer: “What kind of dog?”) I Declare War puts these boys—and one crafty girl, Jess (Mackenzie Munro), who operates like Toshirô Mifune in Yojimbo—in an extreme, provocative scenario, but it reminds the audience often that they’re still just children, raw and unformed.

Once it steps back to reveal the insecurity and hurt that drives its characters’ actions, however, I Declare War puts far too much on the table. There’s no more guessing about why Skinner goes Colonel Kurtz on everyone, or how the events on the battlefield might bleed into pre-existing alliances. Then again, The Goonies and Stand By Me ran into the same problems when it came time to get serious, and I Declare War holds off as long as it can before dumping its emotional payload. Until then, the film gets uncomfortable laughs from the games children play, and play for keeps.