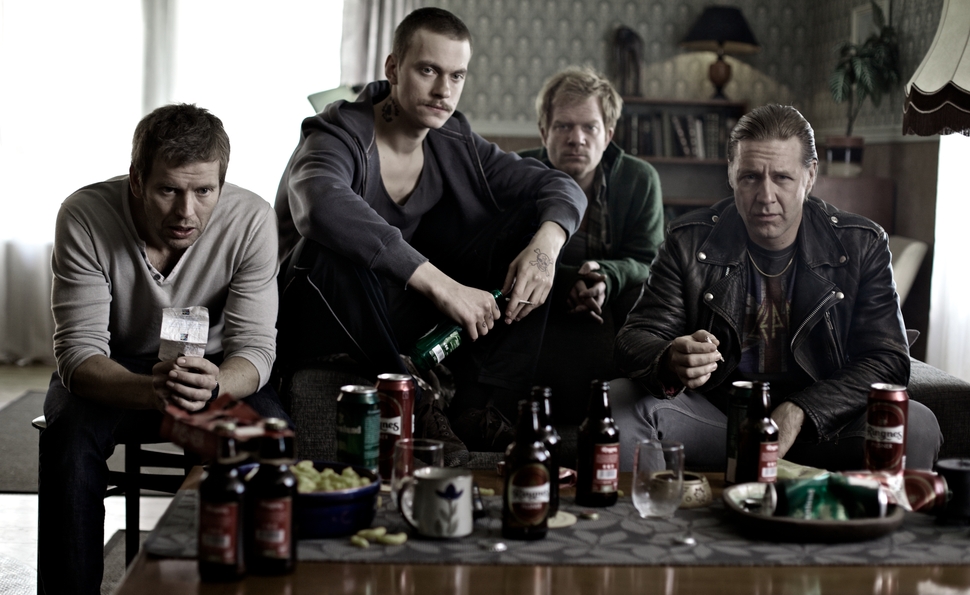 From The Treasure Of The Sierra Madre to A Simple Plan, movies in which a group of friends unexpectedly happen upon a fortune inevitably conclude with a pile of corpses. Jackpot, a gruesome black comedy from Norway (its original title is a Norwegian phrase that means both “poor knights” and “French toast”), opens with the carnage, then tells most of the story in flashback, as the sole survivor, Oscar (Kyrre Hellum), gets grilled by a gruff detective, Solør (Henrik Mestad). This approach kills any possible suspense—Oscar lives, everyone else dies—but that isn’t necessarily a problem, given that the film is mostly trying to be funny. Writer-director Magnus Martens clearly hoped to make something like Fargo, even paying that film direct homage by having his criminals dispose of bodies with a variation on a wood-chipper. The jokes must have gotten lost in translation, though, because Jackpot feels more like Guy Ritchie than the Coen brothers. It revels in moronic violence, unleavened by playfulness or wit.

At stake for the players is the sum of 1.7 million kroner. That isn’t as much as it sounds like—about $280,000, at the current exchange rate—especially since it’s going to be split four ways. Oscar, who works at a factory that employs ex-cons to produce tiny artificial Christmas trees, joined up with his best friend, Thor (Mads Ousdal), and a couple of semi-reformed thugs to enter a soccer pool, and their picks—a 12-game parlay—improbably won the grand prize. When Oscar returns from a quick trip across the border to Sweden to buy some celebratory booze, however, he finds Dan (Andreas Cappelen) on the floor, beaten to death with a hammer. Thor and the other ex-con, a psychopathic type named Billy (Arthur Berning), claim Dan attacked them, wanting all the money for himself, and they killed him in self-defense. Getting rid of the body is just the beginning of the nightmare, however, especially when it’s revealed that Thor owes more than a million kroner to an angry Swedish strip-club owner (Peter Andersson).

Martens adapted his screenplay from an unpublished short story by acclaimed Norwegian writer Jo Nesbø, whose work also inspired the recent Headhunters. It’s unclear which one is to blame for the lackluster plotting, but Jackpot consistently goes for the obvious, stifling all laughs. When a nail gun appears in an early scene, there’s no doubt that it’s going to be put to grotesque use later; having made this blatant setup, a good comedy would find a way to subvert it, via creative human carpentry or unexpected timing. Martens pulls out the nail gun like a magician pulling a rabbit from a hat. (That’s it?) Even the twist ending feels secondhand, easily guessed by anyone who’s seen the Oscar-winning film that employs this same “series of interrupted flashbacks narrated by an apparently meek suspect to a cop following a bloodbath” structure, and easily worked out in almost every detail by anyone familiar with Roger Ebert’s Law Of Economy Of Characters. This particular plan is altogether too simple.