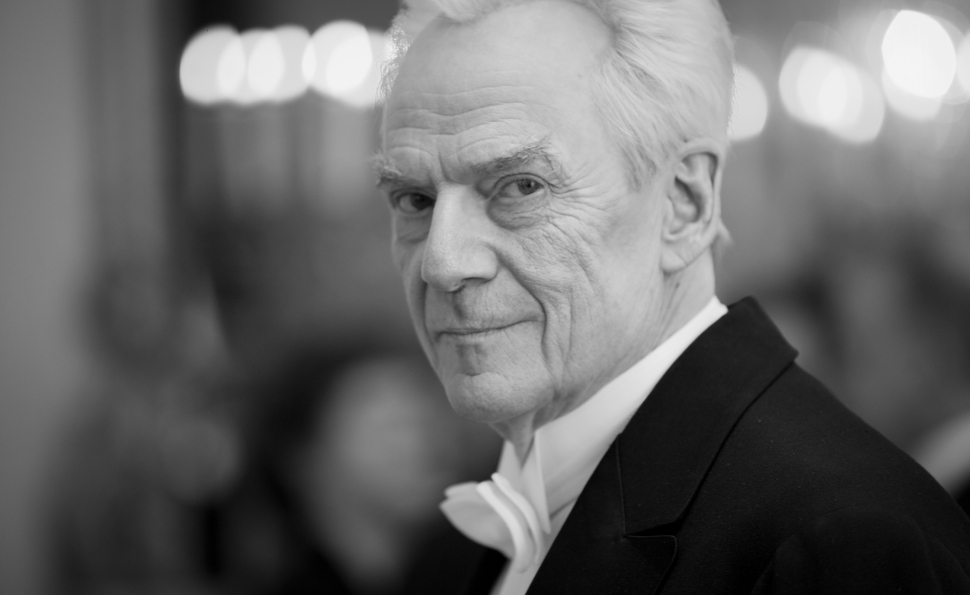 Unlike most modern biopics, Jan Troell’s latest film isn’t likely to be criticized as hagiography. Within the first 10 minutes of The Last Sentence, Troell’s subject is seen fooling around with his mistress, acting callously toward his wife, and haranguing his dinner guests about the their civic duty to fight against Adolf Hitler’s satanic proclivities. In fact, Troell’s messy, unflinching depiction of incendiary Swedish journalist Torgny Segerstedt is so hellbent on a warts-and-all approach that his ferocious monologues against Nazism only occasionally ameliorate his misbehavior.

Adapting Kenne Fant’s biography of Segerstedt, the film opens in 1933, where Segerstedt (Jesper Christensen), the editor-in-chief of the Swedish paper Göteborgs Handels-och Sjöfartstidning, is already on the offensive against Hitler. Despite those around him who believe the threats of Nazism are far away, a fad that doesn’t concern them, Segerstedt has taken it upon himself to lead the crusade against this tyrant. By and large, the country is divided on his provocative prose. He’s backed by the paper’s owner and his best friend, Axel Forssman (Björn Granath), but the Swedish government believes this type of incendiary writing “endangers national security.” Segerstedt is best known for his writing, but The Last Sentence spends a good bulk of its time focusing on his complex personal life.

For 28 years, he’s been married to Puste (Ulla Skoog) in a relationship that hasn’t worked since their son’s death 13 years earlier. In that time, he’s grown cold and distant, becoming romantically entangled with Forssman’s wife, Maja (Pernilla August). There’s nothing surreptitious about their affair. Everyone acts either blasé or oblivious to what’s happening behind closed doors. In one scene, Maja comes to pick Segerstedt up from his house in the middle of the day, Puste anxiously peering through the window. The two flaunt their romance publicly, seemingly unaware of how much it pains Puste. Her marriage to Segerstedt is past its expiration date, but she’s still hopelessly in love with him. “I love you for time immemorial,” she sings, staring directly at him, in a particularly agonizing moment. Later, she puts on the coat he wore on their first date. When he discovers her, he rips the jacket off her back and puts it away. He never physically beats her, but she’s purple with emotional bruises.

Along with Segerstedt’s extramarital affairs, The Last Sentence brings his long-dead mother into the mix; she appears as a ghost throughout. “Your father. You are just like your father,” she says in condemning his infidelity. The recurring motif is meant to provide history and insight, but it mostly comes off as a cheap, lazy screenwriting gimmick.

After jumping ahead five years to 1938, with World War II on the horizon, The Last Sentence moves away from Segerstedt’s love life and into his work. Then Troell’s film finds its stride. When not being harassed by a Swedish government that wants him to be docile, or being called a traitor by fellow citizens, Segerstedt holds forth about impending doom. Forssman and Maja frequently read his prophetic, powerful editorials aloud. Puste isn’t kidding when she tells him, “Sometimes I wish you were more like you write.”

Without a heavy hand, The Last Sentence examines Sweden’s colossal failure to stand up against Hitler. The film tactfully posits that in war, there’s no such thing as neutrality. By neither backing nor condemning the Führer for innumerable inhumane acts, Segerstedt staunchly believes his country is in the wrong, politically and morally. “When it comes to Nazism,” he writes, “silence is acquiescence.” And no matter how narcissistic, apathetic, and unlovable Segerstedt is, his dedication to combating Hitler is impressive. Through great adversity, he remained steadfast and resolute, his disdain for Nazism never waning.

The Swedish title of the film, Dom Över Död Man, translates as “judgment on the dead”—a line that comes from the Old Norse poem “Hávamál.” It reads: “Cattle die, kinsmen die, thou will also die; but I know one thing that never dies: the judgment on the dead.”

As life would have it, the people closest to Segerstedt—his wife, mistress, best friend, mother, son—died before his passing in 1945. Everyone dies eventually, as the poem says, though it’s that fear of eternal judgment that troubles Segerstedt the most. It’s a common fear, especially for writers, who spend most of their time entrenched in their work and its subsequent reception. For most, The Last Sentence will serve as an introduction to Torgny Segerstedt, and by extension, a 126-minute long judgment of his life and career. Like the man himself, the film, with its immaculate black-and-white compositions and cluttered plotting, is riddled with virtues and vices, high and lows. But Troell’s portrait, driven by a desire to excavate the truth, is a refreshing respite from artificial biopics. Segerstedt’s life hasn’t been rewritten, edited, censored, or tampered with—which, if he were alive, seems to be exactly how he would’ve wanted it.