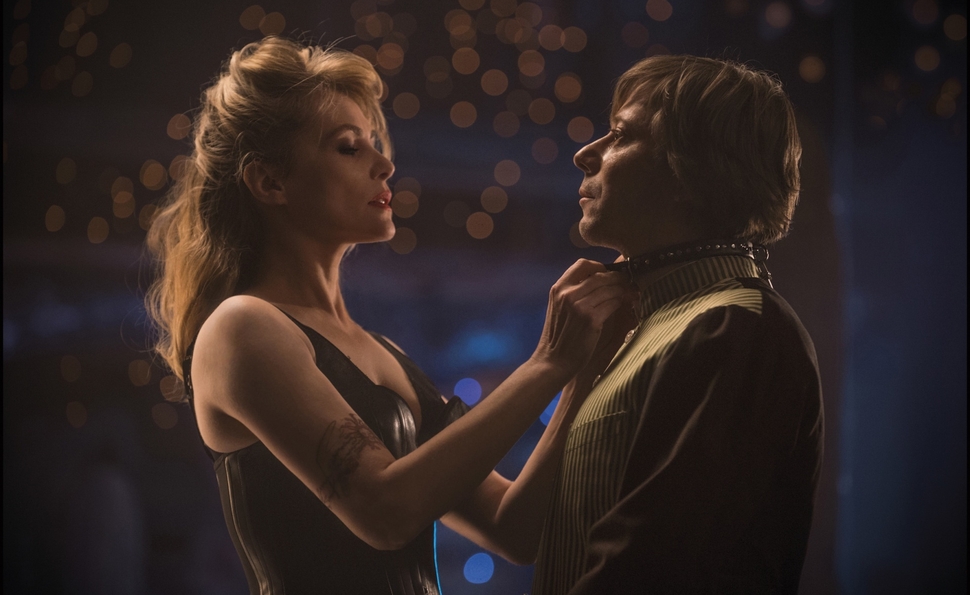 Throughout Roman Polanski’s long, eclectic filmmaking career, the director has done some of his best work with a handful of characters in a confined space. Think of Knife In The Water (three people on a boat), or Repulsion (one woman going crazy in her sister’s flat), or, just a couple of years ago, Carnage (with two couples passive-aggressively poking at each other in an apartment). Even the relatively more expansive Rosemary’s Baby and Bitter Moon ultimately come down to one or two people in a room. Polanski’s Venus In Fur continues in that tradition.

Based on a David Ives play, Venus In Fur stars Mathieu Amalric as Thomas, a grumpy director-playwright who’s about to pack up after an unsatisfying day of auditions when an aspiring actress (Emmanuelle Seigner) who isn’t on his call-list shows up, calling herself Vanda, the same name as one of the lead characters in Thomas’ theatrical adaptation of Leopold von Sacher-Masoch’s scandalous 1870 novella Venus In Furs. Vanda initially seems unsophisticated and unprepared, but once Thomas gives her a chance, she shows she knows the text by heart, and as the two rehearse and debate Sacher-Masoch’s tale of sexual power-games—about a man who persuades a meek woman to become his dominatrix—they mirror the material by taking turns controlling the situation.

Polanski treats Venus In Fur as a film, not a “filmed play.” He moves Seigner and Amalric all over the theater, and takes full advantage of what cinema can do that theater can’t: He moves the camera, he changes angles, and he frames his actors to subtly adjust the emphasis from moment to moment. But Polanski also tries to preserve the experience of watching Ives’ work in its original setting. Live theater is an act of shared imagination, wherein actors, in real time, create illusions of reality using props, sets, and their own voices and bodies. So Venus In Fur takes about 90 minutes to show about 90 consecutive minutes in the lives of Thomas and Vanda, and while the two talk almost non-stop—sometimes reciting lines from the play, sometimes arguing about the meaning of the play—Polanski and his cast frequently pepper in moments of silence, to change the energy or to signal a segue between fiction and reality, similar to how those beats might be handled on an actual stage.

The big question with Venus In Fur is whether all these psycho-sexual head-games—and all the conversations about literature, obsession, and gender—ever arrive anywhere particularly surprising or insightful. The construction of Ives’ play is quite clever, finding a new way to reflect the story-within-a-story device of Sacher-Masoch’s novella, all while suggesting that artists unsuccessfully try to hide their own hang-ups by putting them in the minds and mouths of “characters.” (Every time Vanda complains that Thomas’ play is sexist, he defensively says he’s just adapting the book.) And Polanski has a little meta fun with the material, casting his own wife as Vanda, and casting an actor who looks a lot like himself as Thomas. But even with all the playful nudges, the film follows a fairly predictable pattern, as Vanda starts out gently teasing Thomas, then gradually begins to direct the director, forcing him into a submissive position and exposing him as a hypocrite. That’s about the extent of what Venus In Fur has to say: Sometimes an artist needs to get his ass kicked.

But if anyone can make a stock comeuppance feel like divine justice, it’s Seigner. Polanski’s direction of Venus In Fur is masterful—a pleasure in and of itself—but  Seigner is the star attraction here, giving one of the best performances of her distinguished career. Her Vanda starts out as a soggy mess, popping her gum and telling Thomas, “I’m really demure and shit.” But then she proves to be an astute critic of the play, breaking the story down as, “He’s a perv and she’s an object, like every woman in 1870-whatever.” Seigner shifts smoothly from flibbertigibbet to boss, and it’s righteously entertaining to see Vanda dismantle all Thomas’ arguments for his work and his life, forcing him to stop hiding behind a 140-year-old book and cop to his own desires.