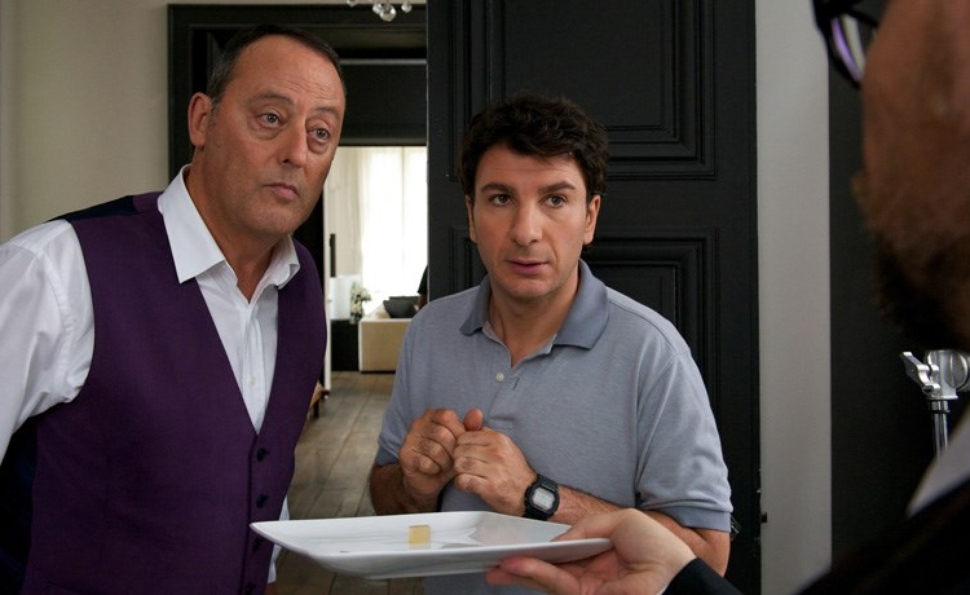 Le Chef involves a showdown between traditional French cuisine and molecular gastronomy, but the film very much serves as the cinematic equivalent of fast food, offering generic, processed menu items that are practically pre-digested. Perhaps somewhere in the world there’s a single lonely soul who’s still uncertain about whether work or family is truly most important in life, and that individual will see this film, with its two protagonists who both tackle said dilemma, and be duly inspired. Barring that miracle, however, Le Chef’s natural audience will consist of people too lazy to reach for the remote and change the channel—apropos, really, given the nonstop laziness exhibited onscreen.

There are two chefs in the movie, as it happens. (The film’s original title translates as Like A Chef, which in French means something closer to “like a boss”—“chef” is just the French word for “chief.”) The world-renowned Alexandre Lagarde (Jean Reno) runs the three-star Parisian restaurant named after him, Cargo Lagarde, which spurns modernist cooking in favor of old-school culinary know-how. This retro sensibility demands high-priced ingredients, however, which doesn’t sit well with the restaurant’s new young owner, Stanislas (Julien Boisselier). Since Lagarde’s contract specifies that he can’t be fired unless Cargo Lagarde loses one of its three stars, Stanislas deliberately sets out to trash the place, handing plum positions at his other restaurants to the primary kitchen staff. Fortunately, a wildly enthusiastic young chef, Jacky Bonnot (Michaël Youn), who’s lost every previous cooking job for being too much of a stickler for quality, wanders into view and becomes Lagarde’s sous-chef—though even Jacky’s dazzling gift for innovation is tested when Stanislas succeeds in cutting off Cargo Lagarde’s access to all of its usual suppliers.

Hokey though this premise is, it could still have been executed with wit and flair, as Germany’s Fatih Akin demonstrated a few years ago with his delightful (and superficially similar) Soul Kitchen. Instead, writer-director Daniel Cohen, who’s worked mostly as an actor, consistently aims for the lowest common denominator, ensuring that Le Chef never manages to be anything more than blandly agreeable. The film’s offensive nadir sees Lagarde and Jacky disguise themselves as stereotypical Asians (with Jacky as a woman, no less) to investigate a competitor’s menu without being recognized. Mostly, though, Le Chef just goes through its lightly comic, rarely funny motions, wasting an enormous amount of screen time on drab subplots involving Lagarde’s neglect of his college-age daughter (Salomé Stévenin), who wants Papa to watch her defend her thesis, and Jacky’s neglect of his pregnant wife (Raphaëlle Agogué), who dumps him when he lies to her about having quit his job as a house painter to work as an unpaid intern for Lagarde.

Don’t worry—both fellas figure it out, making sacrifices that cost them absolutely nothing. (Even a minor defeat might startle somebody awake. Not worth the risk.) The only thing that distinguishes Le Chef from a truly awful foodie flick like Tasting Menu is Reno, who’s more dignified than this piffle deserves. Now 65, he’s left behind the badass persona that made his initial mark (in films like The Professional and La Femme Nikita), cultivating a more courtly air that served him beautifully in Kenneth Lonergan’s Margaret. Here, he’s defeated by the weak material, like everybody else, but he does at least manage to make Lagarde a likable figure who seems genuinely interested in his new protégé, his goofy live cooking show, and even his daughter's thoughts on 19th-century Russian literature. Casting him as the chef of a three-star restaurant was an inspired idea. But movies need more than just one of those.