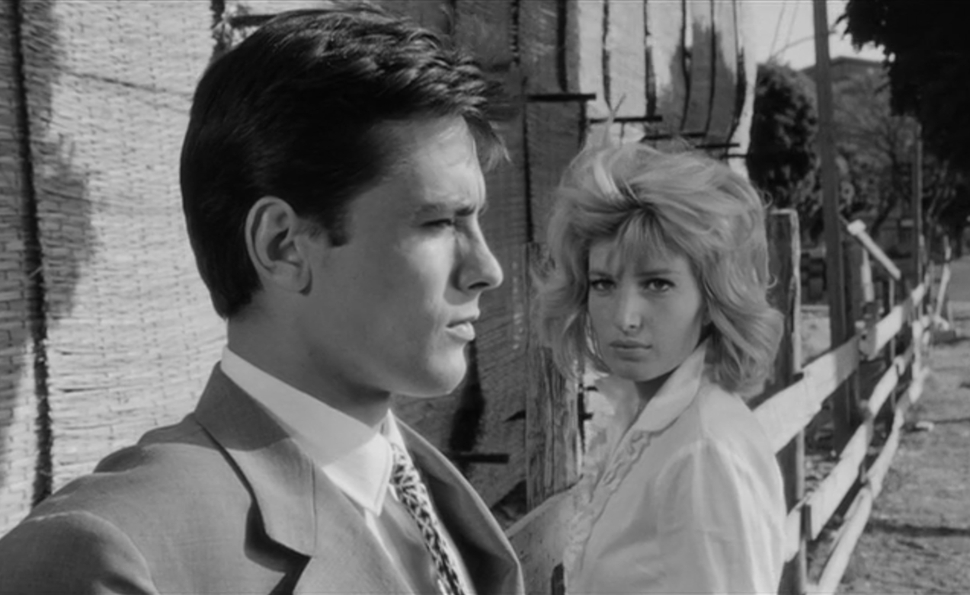 “Don’t you ever stand still?” Monica Vitti’s character asks Alain Delon’s in Michelangelo Antonioni’s L’Eclisse, the beguiling conclusion to a trilogy that started with L’Avventura and La Notte. She asks because the young stockbroker seems charged by the energy of the trading floor, even when he’s away, but he could ask her the same thing. Like all Antonioni’s work, L’Eclisse is full of longueurs where the director soaks in the architecture and landscape, and creates a mood of profound alienation. But it’s also a film defined by constant movement, built around a woman who drives two men to romantic obsession, but doesn’t know who she wants or who she is, and she spends much of her time pacing just as restlessly. There’s something missing from her life—and from life in the modern world, period—but she can’t figure out what it is, and Antonioni isn’t the type to offer explicit clues.

As if in temporal continuity with the dark-night-of-the-soul that brings La Notte to end at dawn, L’Eclisse opens in the morning, with another couple that appears to have been tested over a sleepless evening. Vittoria (Vitti), a literary translator, has come to the painful conclusion that she needs to break off her engagement with Riccardo (Francisco Rabal), and heads off toward her apartment in the EUR, a Rome suburb full of cold, half-complete modernist structures that Mussolini intended for the World’s Fair. While visiting her mother (Lilla Brignone), who’s been feverishly gambling her savings on the stock exchange, Vittoria meets Piero (Delon), a cocksure broker who’s no less bright and energized when the market crashes than when he’s riding a tip to big gains. Though Piero takes an instant liking to Vittoria, she wavers in her affections toward him, wooed by his good looks and effortless charm, but wary of the superficiality behind them. At one point, she tells him she wishes she either loved him more or didn’t love him at all; she’s paralyzed by ambivalence.

As with Jeanne Moreau in the first half of La Notte, Antonioni accompanies Vitti on an architectural tour of her section of Rome, and the estranging structures she encounters. But he also pauses for extensive scenes of social commentary. In one particularly disturbing sequence, Vittoria does an “African dance” in blackface and listens to her friend complain about her family’s fortunes in colonial Kenya, where the white minority felt besieged by the black natives who wanted their country back. From this critique of colonialism, Antonioni shifts straight into an assault on capitalism, spending an extraordinary amount of time with Piero and the other stockbrokers on the trading floor as they play the angles and shout orders above the din. Fortunes are made in one scene and lost in another, but the prevailing impression at all times is a cacophony of greed that Antonioni—and by extension, Vittoria—finds distasteful in the extreme.

Though L’Eclisse is mesmerizing as only an Antonioni film can be, its first 119 minutes aren’t as resonant as L’Avventura and La Notte—in the latter case, it’s partly because Moreau and Marcello Mastroianni’s characters have a marital history they carry into the night, and partly because the film divides into two discrete, unforgettable sections. What sets L’Eclisse apart is the frankness of its politics, which associates Vittoria’s lack of fulfillment with Piero with shallow materialism, and settles none-too-subtly on a newspaper headline fretting over the nuclear arms race. It’s better when Antonioni engages in the mysteries of human behavior and the bone-deep dissatisfaction that seems to radiate from Vitti whenever she’s onscreen.

The mysteries of those last seven minutes, however, are absolute poetry. Antonioni leaves Vitti and Delon behind entirely and reconfigures many of his previously established images and locations into a strange, frightening, avant-garde assemblage. Though Antonioni later slashed his own canvas in spectacular fashion again with Zabriskie Point, the ending of L’Eclisse is more hypnotic than explosive, and perhaps could be considered a dark summation of the entire alienation trilogy. Whatever the case, it’s hard to imagine what it must have been like for audiences at  Cannes 1962 (where it won a Special Jury Prize) to see it unfold for the first time, and though that initial shock may have faded, it remains a testament to the great, unexpected leaps a movie can take.

The three main supplements are all carried over from the 2004 DVD edition, but they’re each helpful in explicating Antonioni’s difficult vision. The commentary track by Richard Peña, former program director of the Film Society Of Lincoln Center, has been carefully rendered, mixing production history and facts with a scene-by-scene breakdown of Antonioni’s technique. Peña points to Antonioni’s background as a documentary filmmaker to emphasize the duality of a film that’s determined to show modern Rome in all its geographical specificity while asserting itself as an expressionist work of art. The hourlong 2001 documentary Michelangelo Antonioni: The Eye That Changed Cinema goes deeper into the evolution of his style, from docs that anticipated the rise of neorealism to the later phases of his career. There’s interview footage with Antonioni, as well as shots of him directing his films, including a dubbing session with Vitti on L’Eclisse. The 22-minute “Elements Of Landscape” is a visual essay featuring critic Adriano Aprà and Antonioni friend Carlo di Carlo that gets into his stylistic architecture while sprinkling in some context, too, like the fact that audiences resisted L’Eclisse everywhere but Japan, where it proved surprisingly resonant.