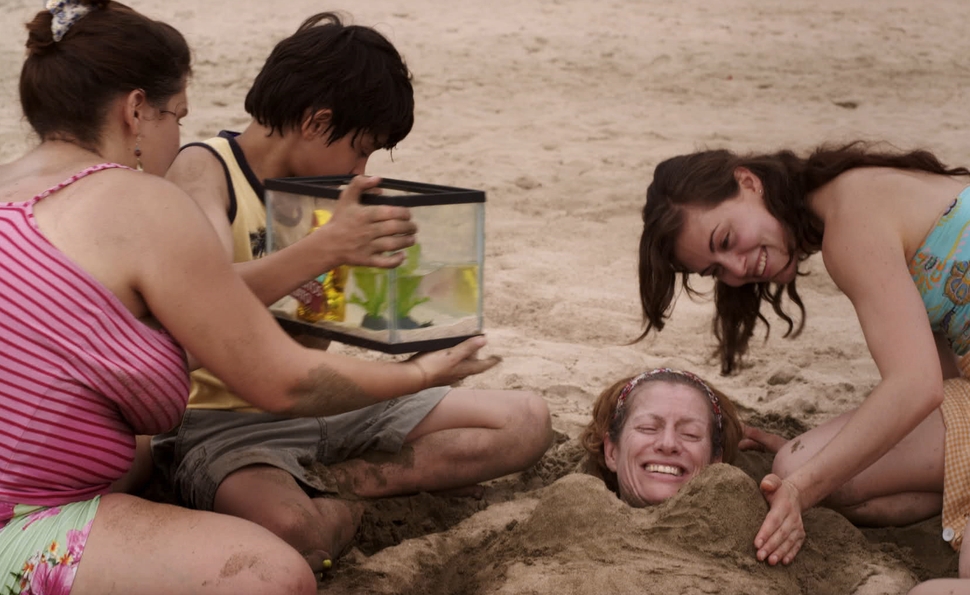 Agnès Godard is a great cinematographer, and her work gives The Amazing Catfish its evocative atmosphere. The scenes of a middle-class Guadalajara household overrun by rambunctious children and an unlikely houseguest are so fragrantly musty that the audience can breathe them in. Hiring Claire Denis’ regular cinematographer was a smart move by rookie writer-director Claudia Sainte-Luce, whose combination of tactile physicality and slightly elliptical storytelling techniques evokes the French masters without necessarily being derivative; this well-travelled debut feature (which won prizes for its Mexican-born director in Locarno and Toronto) has its own sensibility, for better and worse.

At its core, The Amazing Catfish is a parable about a person drawn out of her shell. Introduced in the throes of some strange, piercing pain—physical or psychological, it’s tough to tell—Claudia (Ximena Ayala) is a loner whose interactions with the outside world are painfully awkward. When she’s admitted to the hospital with what’s eventually diagnosed as appendicitis (she informs the admitting physician that she couldn’t possibly be pregnant, a subtly telling line of dialogue), she ends up sharing a room with Martha, a terminally ill, widowed mother of four whose kindness pierces Claudia’s shell.

Martha ends up inviting Claudia to stay with them, which is really the film’s only plot point; from there, it’s just a matter of observing Claudia as she interacts with Martha’s four children (who were conceived via three different fathers) and growing into her role as a caregiver, an evolution that’s cleanly diagrammed in Sainte-Luce’s script. The film’s tension lies between its solid, predictable central character arc and the well-observed messiness of its locations and interpersonal dynamics. Its depiction of a crammed single-parent household is alternately fraught and tender, with a superbly cacophonous sound design that renders all sorts of onscreen and offscreen comments precisely.

What keeps The Amazing Catfish from greatness despite the evident skill at every level of its production—the editing is sharp, and the actors are all excellent, especially the children—is the sense that Sainte-Luce is luxuriating in quirkiness for its own sake. There’s a fine line between contrived deadpan comedy and everyday weirdness, and the film doesn’t always tread that line lightly. Similarly, the difference between emotional plangency and simple sentimentality grows hazy in the film’s final scenes, which don’t so much pay off the build-up of what’s come before as attempt to push it into an incompatible tonal register. Missteps aside, though, Sainte-Luce shows great assurance for a first-time filmmaker, and if she’s able to capitalize on her talent going forward, The Amazing Catfish will be looked at fondly as ground zero for a worthy career.